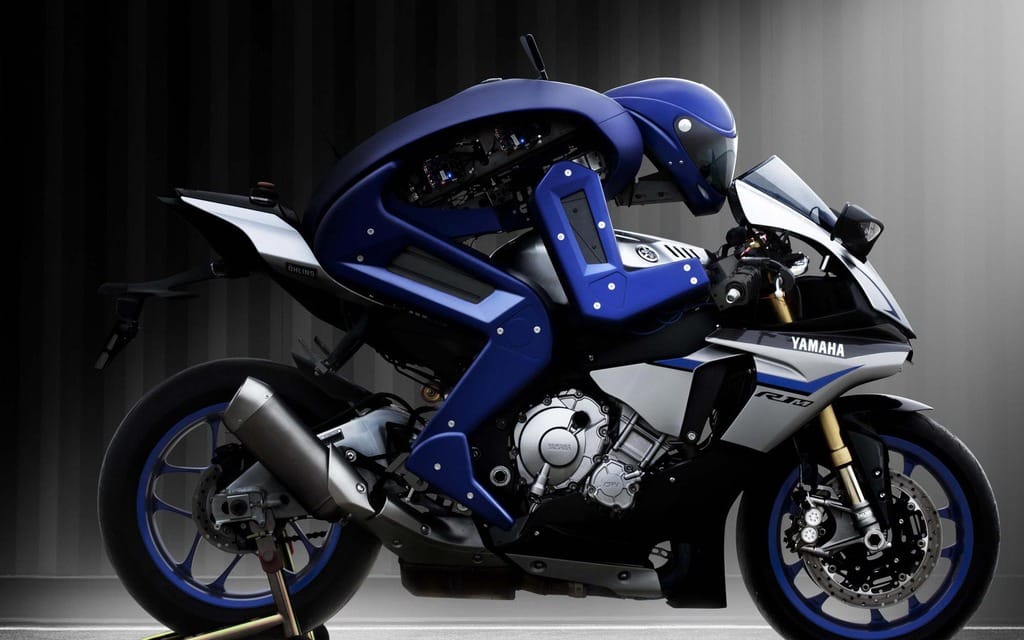 Yamaha plots Rossi’s replacement
Valentino Rossi may be the greatest motorcycle racer of all time. His questionable on- and off-track behaviour at the end of the 2015 MotoGP season reinforced his humanity (and proved that, aside from Taylor Swift, no one is perfect). But considering his body of work—nine world titles, seven in the premiere class—you could be forgiven for thinking him an otherworldly being. The Doctor, however, is nearing 40, and Yamaha will need to replace him—but with whom, or by what?

By engineering something inhuman. Witness Yamaha’s Motobot, unveiled at the Tokyo Motor Show. Accompanying the unveiling, a video (find it on YouTube) in which Motobot recites an open letter to Rossi. “I was created to surpass you,” the Bot begins, but then admits it’s not sure it could match even a five-year-old Rossi. “Perhaps if I learn everything about you, I can catch up,” it says in the language of a stalker. A riding demonstration follows, Motobot twisting the throttle, making steering inputs, engaging the clutch and shifting a gear. The Bot’s R1M (a sublime machine surely wasted on . . . a machine) is outfitted with outriggers and surpasses 100 km/h in a straight line.

The claim that Motobot has been created to surpass Rossi is tongue-in-cheek, and the result an insanely expensive RC toy. (We’d like to see Motobot in a to-the-death match with Honda’s 15-year-old ASIMO robot—it can walk, push a cart, open a door, flick a switch but, like every drunk we’ve known, has trouble with stairs.) That Motobot can already ride a motorcycle as well as half the cruiser riders on the road is impressive—or terrifying, or a bit of both.

Motobot has other implications. And we don’t mean autonomous motorcycles—though with continuing advances in related technology, that day isn’t far off. (Google and Tesla are openly working on autonomous cars, and Apple is rumoured to be in the mix.) If Yamaha were simply making an autonomous R1M, the goofy (and heavy) robot affixed atop it wouldn’t be necessary. Servos could more easily manipulate the controls; in essence, the bike would be the robot. The important point is that Motobot is humanoid and hence must ride like a human. To make a robot ride like us, Yamaha must understand how we ride.

Telemetry tells us precisely what the motorcycle is doing, as well as the forces acting upon it, but exactly what the rider is doing is still mysterious. Simple tasks like twisting the throttle, engaging the clutch and shifting a gear while straight up and down are, well, simple—Motobot has already mastered that. Super slow-motion cameras and motion capture suits aren’t needed to understand those movements. But exactly how does Rossi rail a corner with his knee down, or rise up for a wheelie? Exactly how does he save a front-end tuck? If Motobot is to ever emulate a human’s sinuous movements in controlling a motorcycle, Yamaha’s understanding of rider dynamics must advance a long way.

Before we’re elbowed out of our saddles by thrill-seeking robots, we’ll reap the benefits of that burgeoning understanding. More thorough knowledge of how we move on a motorcycle can improve design and safety technologies. What comes after cornering ABS? Is it some form of “smart ABS” that not only takes into account the bike’s speed and lean angle, but also the rider’s body positioning? Can the same principle be applied to traction control? Yamaha’s project may help answer these questions, as well as reveal ways we can adapt to become better riders, though we suspect Rossi’s sublime capability may forever be impregnable—to robots and club racers alike.