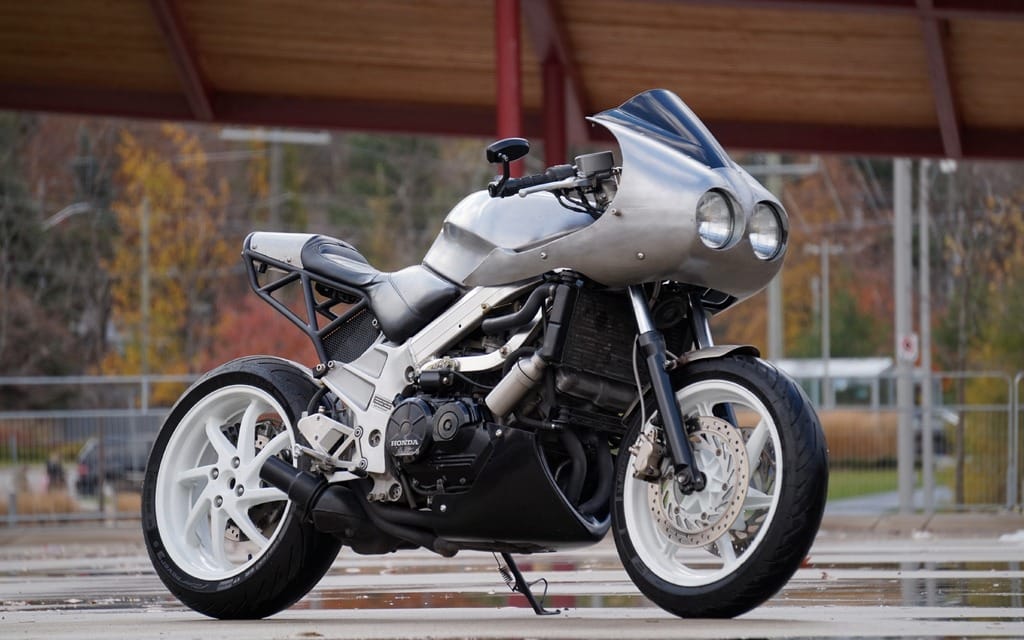 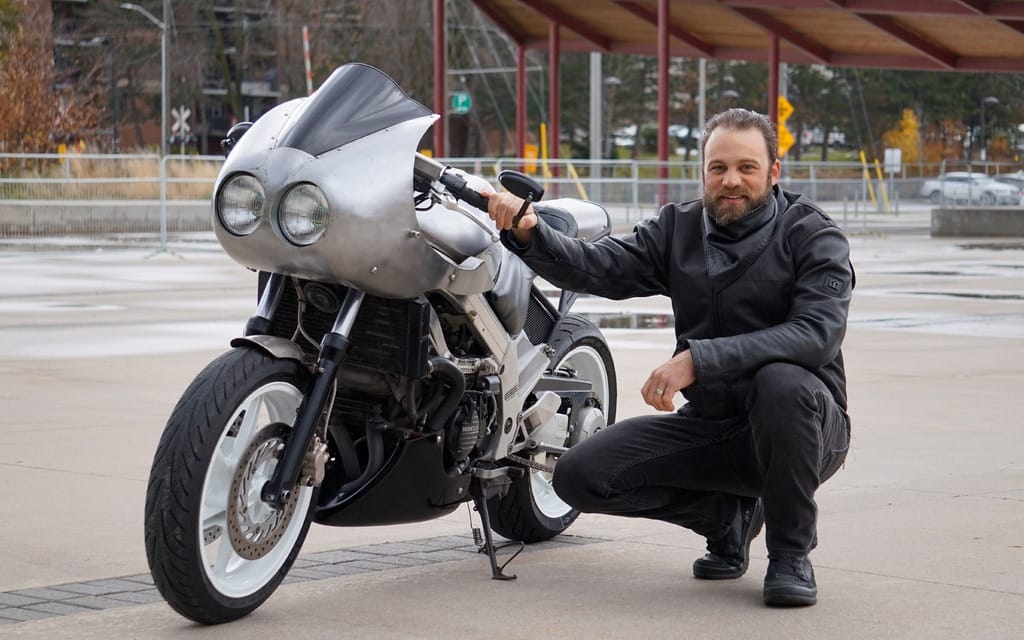 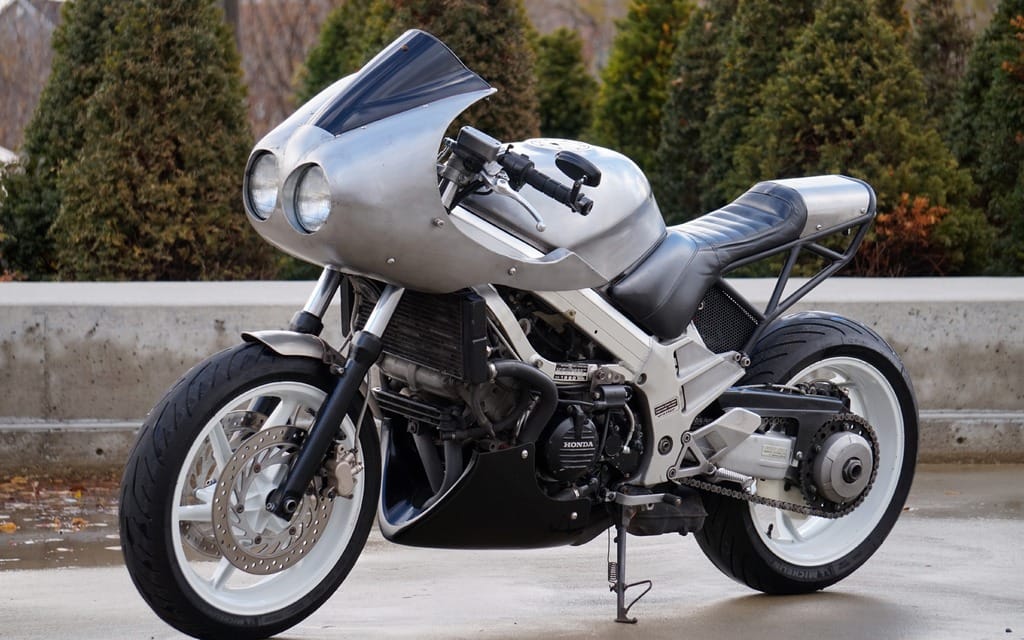 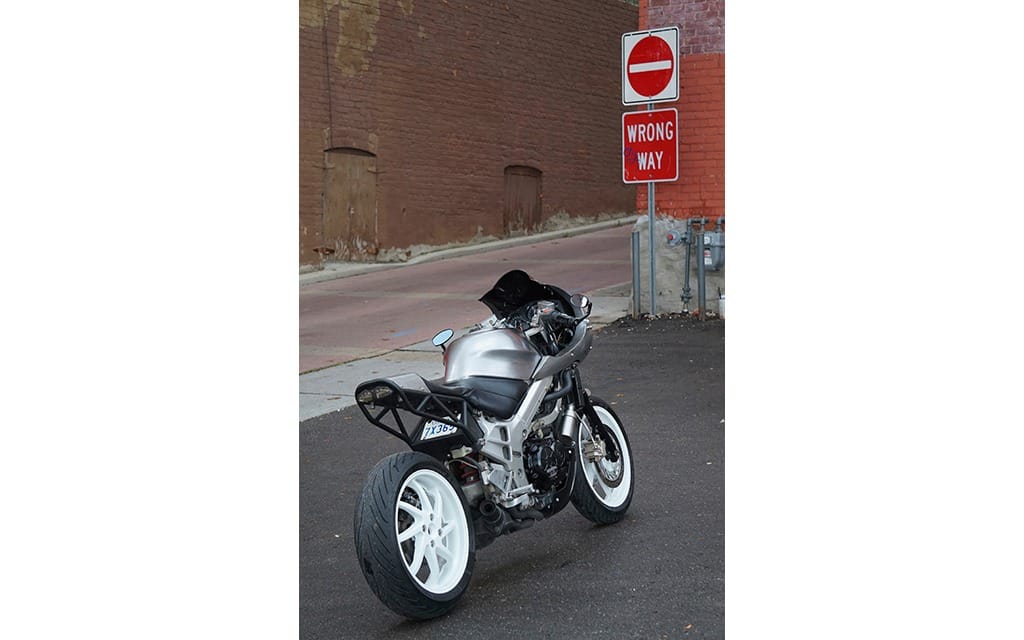 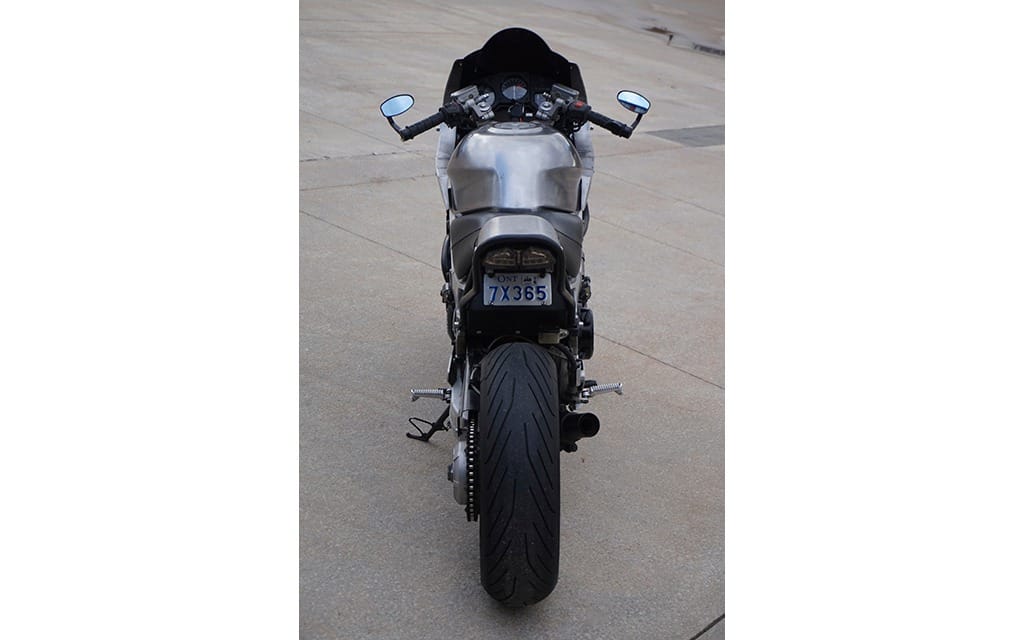 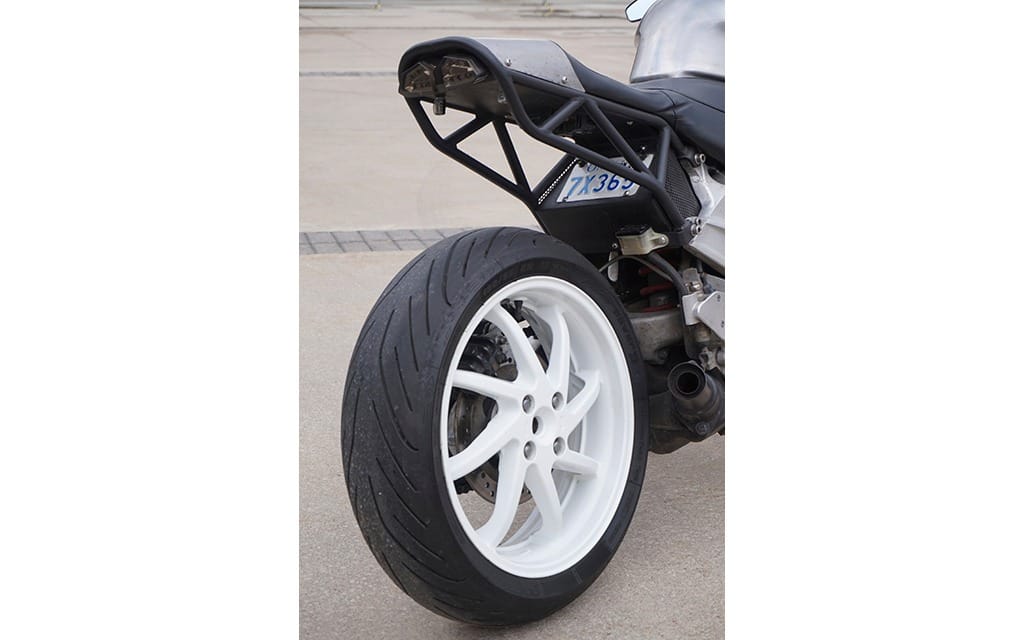 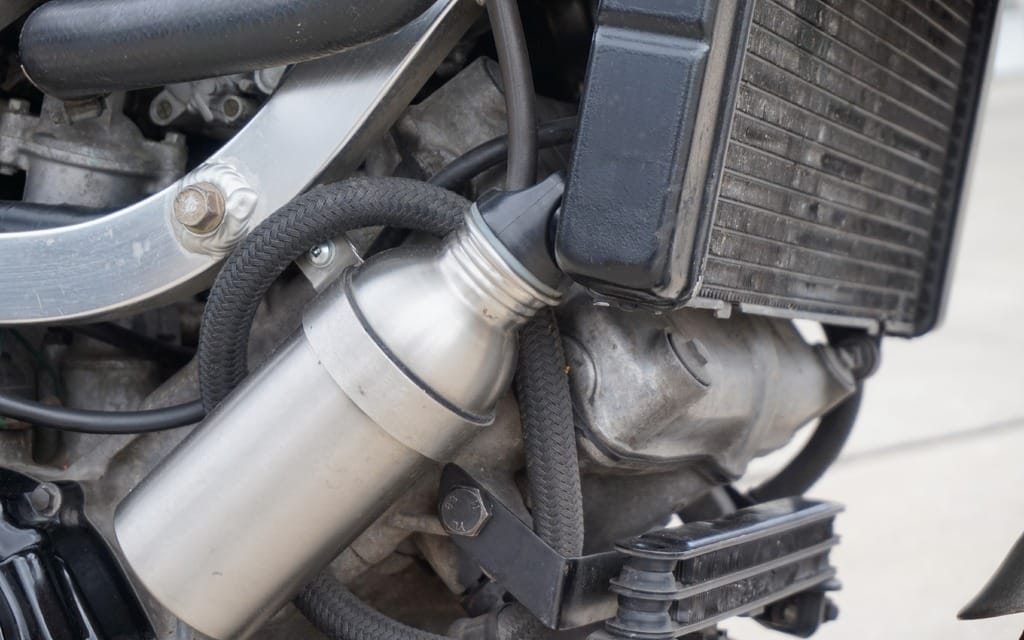 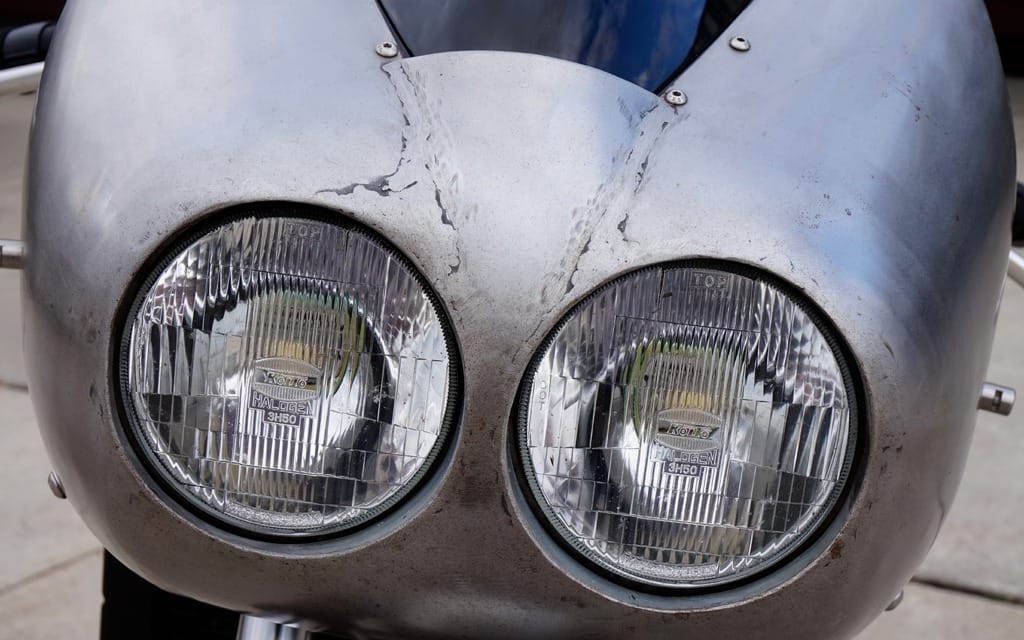 What’s that you say? A Honda café custom that isn’t a CB?
Michael Sanginesi, a 38-year-old electrician with one wife and two kids, was missing something. That something was a motorcycle. He had owned a bunch of them. His first, a Honda XL600, he bought as a teen behind his parents’ backs. Then there was a CB750F Super Sport. And a Harley, an FXR-based beast “hot-rodded inside” to a thunderous 90 horsepower. And then life got in the way. “I had to sell the Harley. I didn’t have a bike for 10 years.” But the itch remained. It was time to get back in the saddle.

That first winter was spent “just fiddling.” The VFR’s tail section was “huge,” Sanginesi says. “I wanted something smaller and slimmer, to make the rear wheel the focal point.” He mocked up and welded a svelte tubular steel trellis subframe. Next up was the seat. He grafted a fibreglass seat pan onto the trimmed stock pan and had Marlee Auto Interiors of Toronto cover it with leather donated by a friend. The tidy all-in-one LED taillight was an eBay find. Though the stock fairing was in rough shape, the spring riding season was fast approaching, so he cleaned it up and hit it with black paint.

Sanginesi is quick to admit he’s not much of a mechanic, which is why he left the VFR’s twin-spar aluminum frame and V-4 alone. “Honda knows what it’s doing,” he says. With over 84,000 kilometres, the bike has a past, but it runs well, Sanginesi says, so he just gave it a tune-up. The addition of braided steel brake lines, new fork seals, and fresh tires made the VFR roadworthy.

But the first summer was just the beginning. In homage to the RC30, Sanginesi replaced the VFR’s stock rectangular headlight with a pair of round lights salvaged from an ’89 Yamaha FZR400 and supported by homemade mounting brackets. Next up was the fairing. With a sheet of 20-gauge steel, an English wheel from Princess Auto, and a sandbag and a mallet, he got to work cutting, shaping, and spot welding. “It went better than expected,” he says. All told there are 10 individual pieces of metal cobbled together.

“I’ve never done anything like this before, fabricating my own fairing. When I started I watched a lot of YouTube videos. I had something in my mind but didn’t have the experience, but I tried it anyway. I don’t just go to the store and buy things. I try to recycle and repurpose. It keeps the budget down, but I also enjoy being resourceful, using what I have.”

The previous owner had fit a lengthy Yoshimura silencer that had a nice tone, Sanginesi says, but was too quiet. “My buddies’ bikes were all louder than mine.” In addition to wanting volume, he wanted the rear wheel to be displayed prominently. He shortened the muffler six inches but wasn’t satisfied. He even considered fabricating an entire exhaust system, but, in the end, he bought a three-inch-to-two-inch adapter from Canadian Tire, welded on a mounting flange, and bolted it up. “It was so loud it sounded like a stock car on the banks at Daytona,” he says. Which was “awesome. For a day.” He considered buying a baffle until a friend challenged him to make one, which he did, by drilling holes in a length of electrical conduit.

The VFR’s radiator reservoir “looked like it came from a car.” He wanted something smaller, shapelier. “I’d seen one made from an energy drink can, but I’m not big on advertising and don’t touch those drinks.” But it got him thinking. In the fridge he spotted an insulated aluminum water bottle from Costco. “It wasn’t used, so I used it,” he says.

As before, the arrival of riding season halted work on his work-in-progress—but now that winter is again upon us, what’s the next step for his VFR? “I’ve got to clean up the fairing,” Sanginesi says. “There are some dodgy welds that need to be tidied up and filled in. I want to make it smoother, iron out the rough edges. I’d also like to elongate the chin spoiler into a true belly pan.” He plans on giving the chassis a proper powder coating, but is torn about painting. “It would finish it off, but it might look too clean. I like the rougher, handmade quality of raw metal. I’m on the fence.”

Total cost of the project thus far (not including the English wheel) is under $3,000. “My budget’s pretty feeble,” says Sanginesi. “I have a family to take care of, bills to pay. In order to customize a bike, I had to do it myself. On Friday and Saturday nights, after the kids had gone to bed, I’d be in the garage until three or four in the morning. I’ve kept a log of how many hours I’ve worked, but I’m afraid to add it up. My wife says I’m obsessed.”