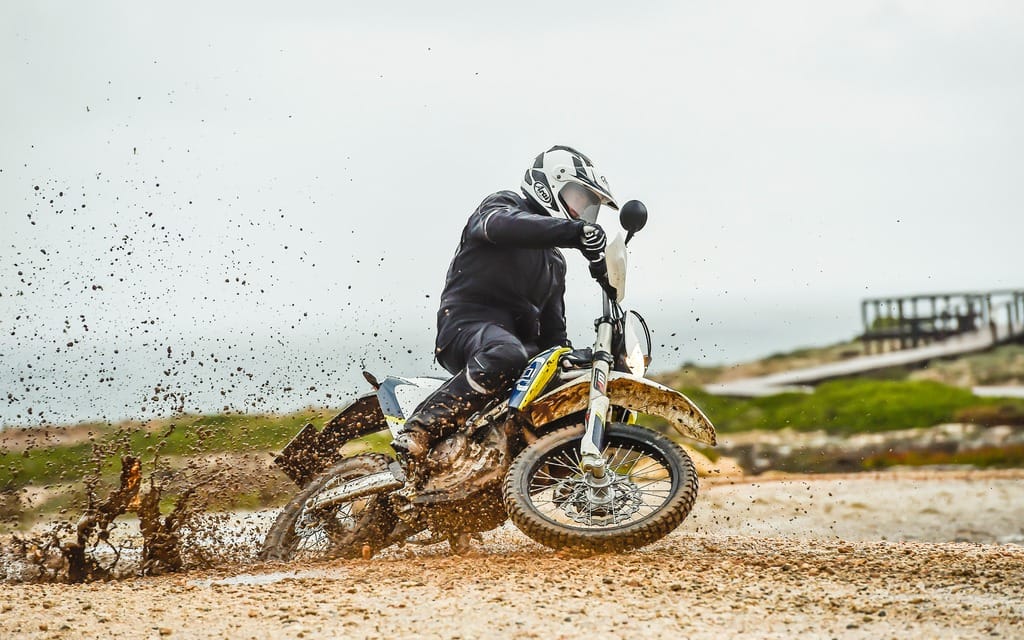 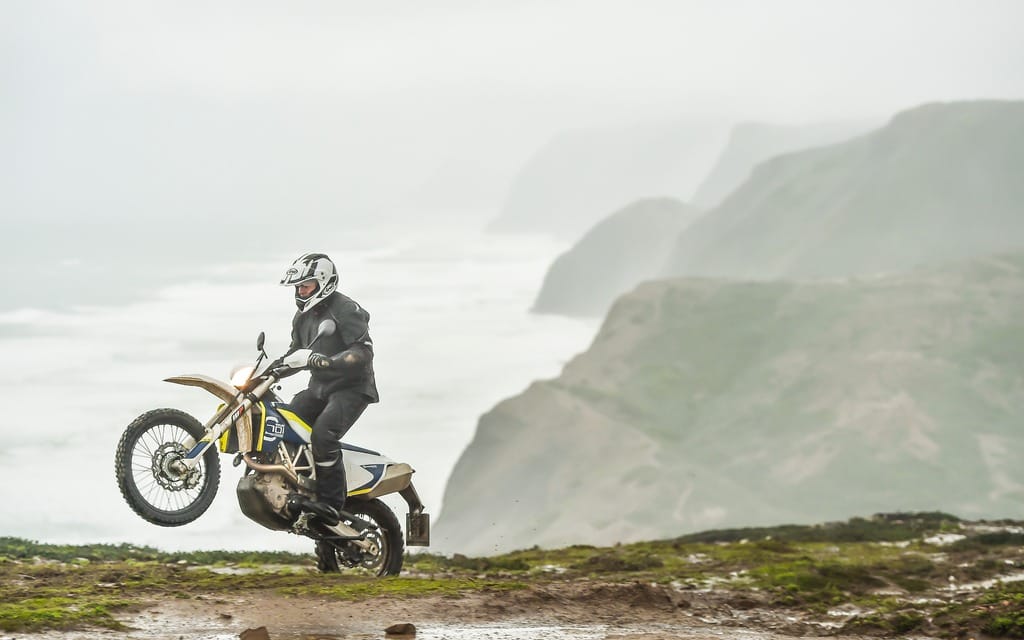 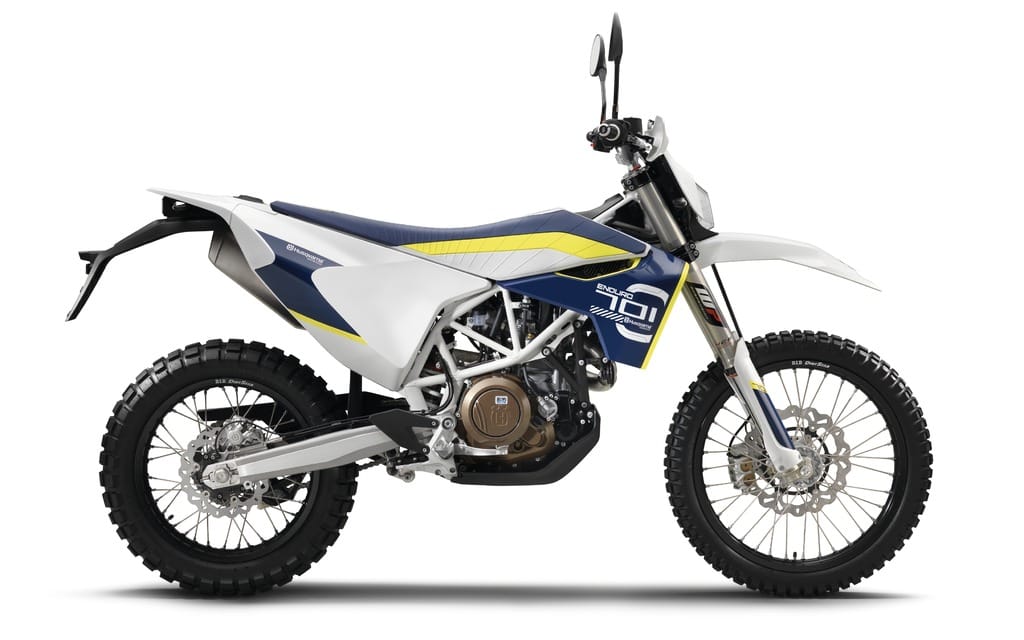 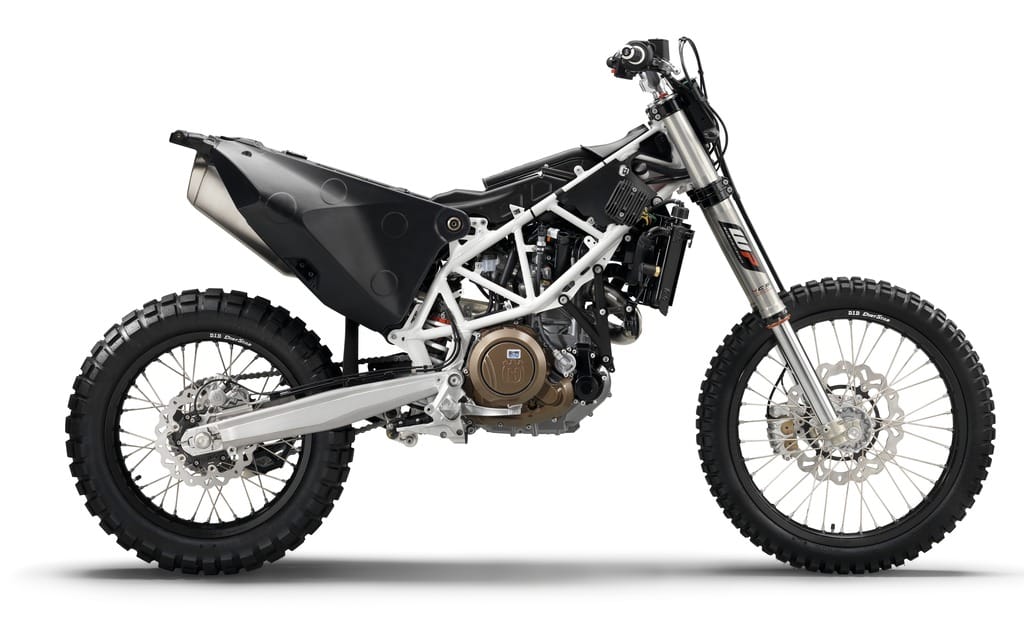 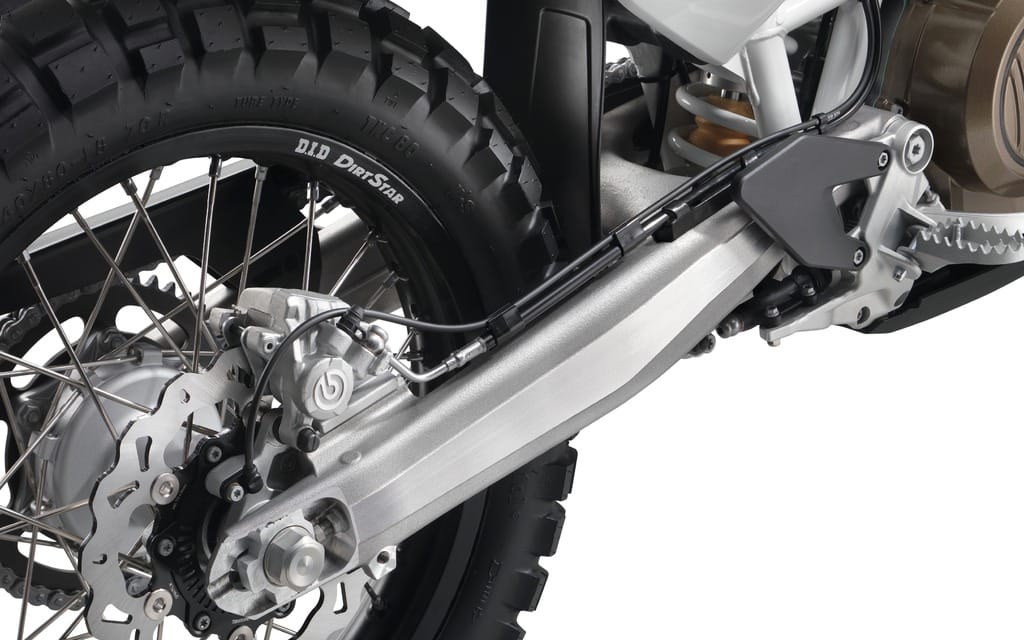 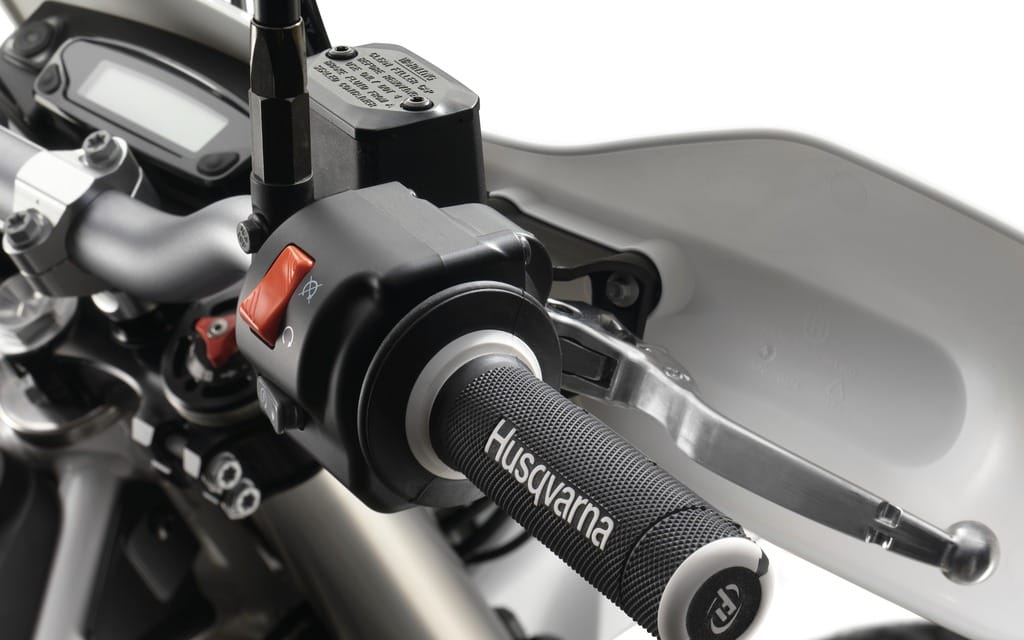 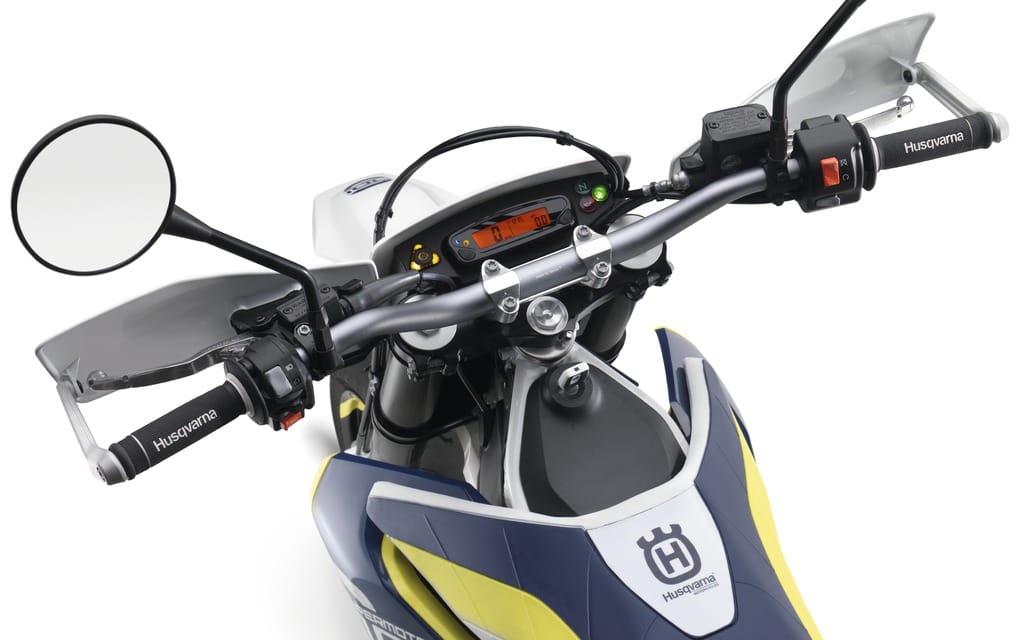 I’m cozy and warm in my Alpinestars suit, and the rain runs in rivulets from the centre of my visor to the edges to be carried away in the wind. I feel like I’m in my kitchen in a rainstorm, looking out the window to the garage, which makes me think of the end-of-season tasks that await—oil changes, fuel stabilization, the fitment of winter tires and a dozen more tasks that bring me practical pleasure. But hold on. Our leader is waving his arm and flashing his signal and intentionally veering into the ditch.

Compromise. We all have to do it. None of us are happy about it. But compromise isn’t limited to our interaction with wives past or present. Invest that money or buy those skis? Take that trip or finish—finally—that renovation? Motorcycles—and the people who design them—struggle as we do. Power means weight and a corresponding loss of agility. A bike that’s nimble through a city’s core is boxed about the ears by a highway’s buffeting. In motorcycling, there is no greater compromise than the motorcycle that sets out to be an on-road and off-road machine.

One-by-one the riders in queue ahead of me stand on the pegs of our matched Husqvarna 701 Enduros and plunge down off the road following our leader. The pace, as is press launch tradition, is quick. A guttural grunt as I hammer my way up a rocky incline fogs my visor and the world transforms into a soft-focus dreamland. As I skitter from side-to-side on the trail I raise my left hand to flip open my visor just in time to note that the path cuts hard to the right and hugs the edge of a hill. I brake (with just a single finger—the mud is as dense as rhubarb pie filling) then lower the right end of the handlebar down past my knee and slide—with uncharacteristic grace—around the corner, with a fist-of-throttle mud-flinging flourish.

A summer of flat tracking has made me much more comfortable on the dirt than in seasons past. Unlike pavement riding, where a rider can precisely choose a line, riding on dirt—especially dirt that’s been drenched with 24 hours of rain—is more a process of suggesting a direction to the bike than of insisting upon one. And while my knowledge of the intricacies of dirt bikes doesn’t rival my knowledge of street bikes, it’s instantly apparent that the 701 Enduro is a very competent machine. I’d even venture a guess that it’s at least the equal of any other serious enduro machine. As good, even, as a KTM. What’s that you say? It is a KTM?

It’s coming back to me now. When BMW shed Husqvarna to KTM, Husky had a rail-thin product line. But KTM, with everything from high-tech MX-ers for kids to the 1190 Adventure, has a fulsome product line. The 701 Enduro on these pages is essentially a KTM 690 Enduro R with revised bodywork. But don’t tell a Husky staffer (as I did) that his bike is identical to the KTM. It’s the nascent stages of the new company, he said, and, in the future, the differences between the two companies’ products will be more substantial. Whether that means that platforms will continue to be shared with KTM (in the Chevrolet and Oldsmobile way) or that Husky will develop machines entirely on their own is as yet unknown, but a marketer would likely tell me that it doesn’t matter—a different brand identity is as good as a different brand. Period.

KTM has accomplished the unprecedented: a European brand that has, in the off-road world, become a mainstream brand. European motorcycles have an aura that transcends their sales volume. As of just a few years ago, in the U.S. market, Suzuki sold as many Hayabusas as did Ducati motorcycles. And Ducati is doing well and the U.S. is their largest market. KTM is mainstream because of sales volume. The risk of such success, of course, is that it’s hard to tout exclusivity to prospective owners if you’re as common as McDonald’s franchises. That’s where Husqvarna comes in. Husky’s marketers tell me that their buying demographic is older than KTM’s, and by touting Husqvarna’s past they have steered their machines’ appeal toward the single-malt-sipping dirt-bike connoisseur—if there is such a person. (Husqvarna, at the very least, offers an alternative to the orange-averse.)

A rider’s reaction to an unfamiliar machine has much to do with what they’re familiar with. Over the years, I’ve logged thousands of miles on big BMW GSs and V-twin KTM Adventures, so to me the 701 Enduro is as light as wispy as a glass of Chablis. The compactness and lightness of single-cylinder engines make them the only viable powerplants for serious (as in seriously agile) dirt bikes, but the downside has often been the coarseness and the vibration that come along with it. But our stint on tarmac reveals the counterbalanced single in the 701 to be a gem—it’s easily among the most refined singles I’ve ridden. The exhaust note is uninspiring in that single-cylinder way, but it neither punishes the ears nor whistles like a lawnmower, so we’ll deem it a success.

Despite the 701 moniker, the single-cam four-valve engine is of 690 cc displacement. Claimed horsepower is 67. A slipper clutch is standard, as are three (standard, soft, advanced) riding modes. Oddly, to adjust the modes it’s necessary to root about under the seat, or, if you’d prefer a more civilized approach, to purchase the option that allows you to adjust them from the handlebar. Another peculiar (though fairly common) option is that it’s necessary to purchase a dongle that plugs into the electrical system to permit the Bosch ABS to function on the front wheel while allowing the rear wheel to lock. Antilock braking is an essential component to modern motorcycling, and though grizzled off-roaders claim it’s a hindrance in the dirt, the ability to lock the rear wheel on a slippery decline allied with the promise of not inadvertently catapulting oneself over the handlebar with a locked front wheel is a perfect compromise. Compromise, that word again.

On our ride along Portugal’s southern coast we hop from dirt roads to paved roads to rocky trails. Nothing could be classified as technical single-track, but some of it’s particularly gnarly. This on-road to off-road transition allows the 701’s merits to come to the fore. On road the smoothness of the engine and the relative plushness of the WP suspension (KTM’s house brand) make a mockery of potholes and curbs and just about any other obstruction short of razor wire. (Though, commendably, the bike doesn’t wallow in fast, paved corners.) And though the rider’s legs and torso are exposed to the vagaries of weather, the wide bar and supportive seat are accommodating and allow easy fore-and-aft movement. (Given the average thickness of a reasonably fit family, you could squeeze mom, dad, and a pair of kids onto the lengthy seat—though you’ll all be fighting for the same pair of footpegs.)

As soon as I venture off road the generous suspension travel (275 mm at either end) allows even the most treacherous terrain to be vaulted. The Continental TKC 80 tires are pretty good off road and pretty good on road—more traction in the dirt would come at the expense of good manners on pavement, and a better street tire would make the Portuguese mud all but impassable.

If you’re accustomed to street bikes, dirt bikes can appear crude and rudimentary in both design and execution. Off-road plastics with moulded-in colour, in particular, often have the elegance of a hockey player’s shin pad. But the Husky elevates itself above the norm with body panels that boast a lustrous finish with richly coloured graphics. The seat also shows fine detailing, with embossed ridges that slash along either side from stem to stern. (A statement that’s not an alliterative indulgence, as the seat extends from the top triple clamp to just shy of the rear axle.) Facilitating the seat’s reach is the repositioning of the fuel tank from its conventional place overtop the engine to underneath the rear of the seat in a polyamide cell that doubles as the rear subframe. Just don’t think that the repositioning of the fuel tank has allowed the seat to be placed in a more democratic location for shorter riders—it’s a lofty 910 mm up from the ground.

The past decade has seen astounding advancement in the sophistication of fuel-injection systems. The 701’s Keihin 46 mm throttle body is allied to a ride-by-wire throttle that allows remarkably smooth throttle transitions. As a test rider you learn much about the nature of a motorcycle doing U-turns for a photographer’s lens, and the 701’s fuelling is brilliantly mapped. (I mention this to a Husky staffer, and the conspiratorial answer is that Husky fuelling maps are “updated” compared to what KTM is using on the 690 Enduro R.)

That Husqvarna—and by extension KTM—can build a capable off roader isn’t in question. Where the 701 surprises is in the sophisticated manner in which it bends to the opposing requirements of street and dirt use. The only underwhelming aspect of the bike is that Husqvarna haven’t exploited the merits of the machine further. Fitting it with a more substantial rally-style fairing in place of the traditional dirt-bike plastics wouldn’t compromise its off-road chops but would elevate its effectiveness as an on-road machine. With panniers affixed it would come close to a middleweight ideal for the roads and non-roads that criss-cross our land. As much as the 701 is a good bike right now, it might just be the start to something greater.