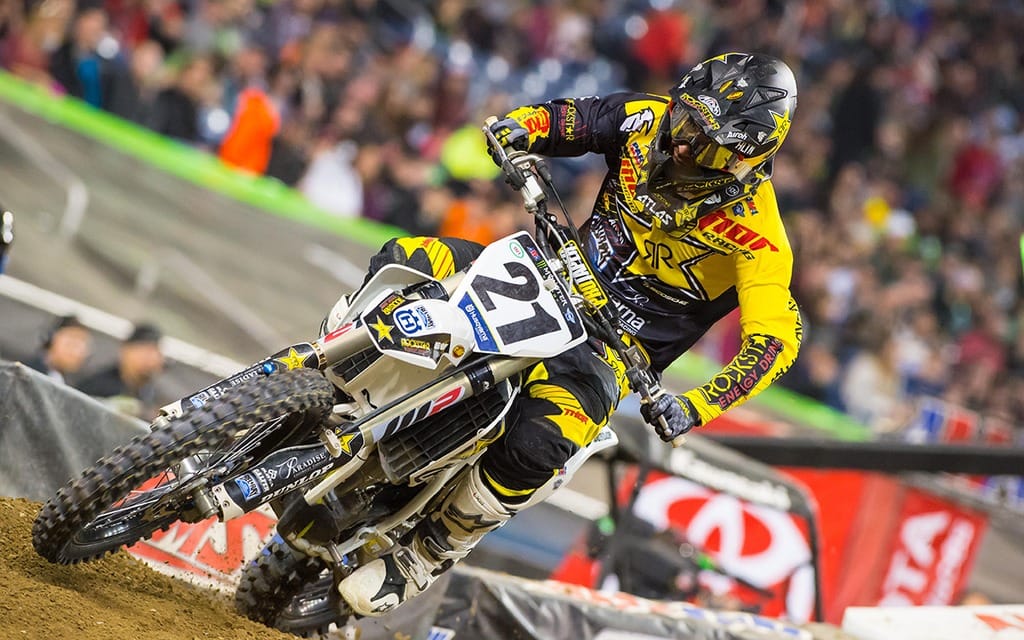 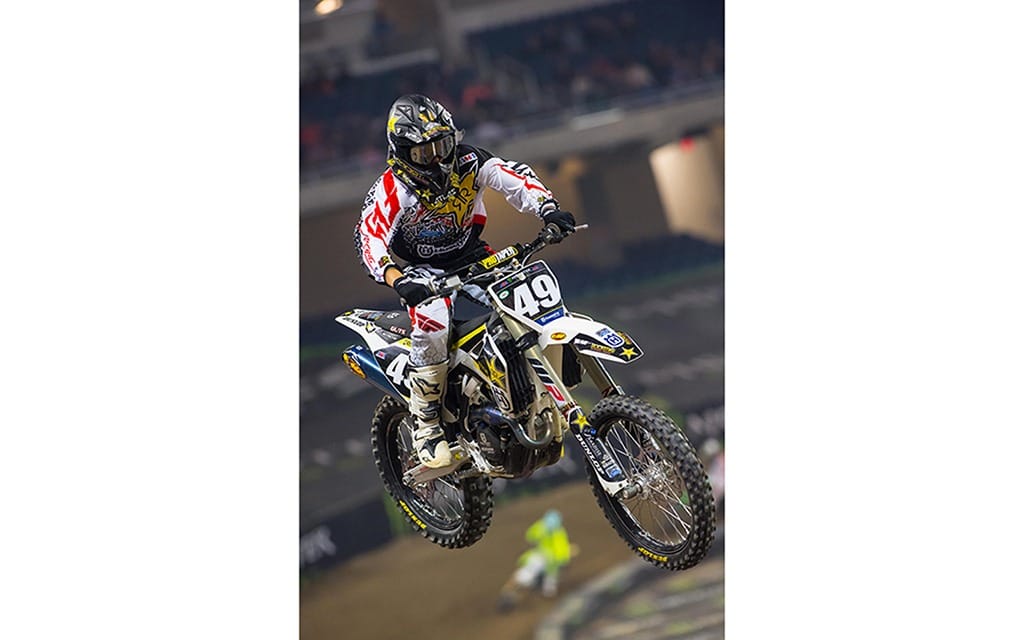 Davalos Finishes 5th in 250
Rockstar Energy Husqvarna Factory Racing’s Jason Anderson had an excellent night at the Detroit SX on Saturday, held at Ford Field in Detroit, Mich. After posting the second-fastest qualifying time in 450, he earned a valuable second-place podium finish in the main, before being handed the win after Ryan Dungey was docked two positions for jumping on a red cross flag. Anderson heads to Santa Clara after the series takes a weekend off for Easter, sitting third overall in 450 rider point standings, and two main event wins on the season. In the 250 class, teammate Martin Davalos finished fifth after skipping last week’s race for personal reasons. 450 rider Christophe Pourcel was unable to race due to injury.

Jason Anderson showed once again how well suited his Husqvarna FC 450 is for the tight and technical confines of professional supercross by posting the second-fastest time of the day. After a mid-pack start in his heat race, he quickly closed on the top five by lap three. He made an impressive pass for fifth with a great run through the very tough whoop section, followed by a pass for the transfer position in the final lap to finish fourth. In the main, Anderson and his powerful Husqvarna FC 450 were right in the mix after the ultra long start straight and forged ahead logging some blistering opening laps. He was approaching the podium by lap three, and made the pass for third in lap five. Never one to quit, he finished strong by climbing into 2nd position on the last lap before the checkered flag flew for the grueling 20 lap main event. After the race concluded, race officials determined that Ryan Dungey, the winner of the race, would be penalized and docked two positions for jumping on a red-cross flag. This moved Anderson from second to first and gave him the win in Detroit. He is currently third overall in 450 rider point standings.

“I had a great day of practice,” said Anderson. “My day went really well. In the heat race I came out, got to fourth and stayed there to qualify. When I got to the main I got a pretty good start based on where my gate was. For the most part I just kind of stayed behind Marvin, and he ended up falling so he kind of gave me second. It felt good to see the leader the whole time and know I was on-pace. I mean I always knew I had the speed, but I’m finally starting to show it.”

Martin Davalos was looking to salvage valuable championship points after missing last week’s race in Toronto due to personal reasons. He was second on the start in his heat and held his position to the finish. After a small first turn altercation in the main event, he made some great moves early in the race and was in the top 10 by the second lap. After a slight dip into 15th in lap four, he regained focus and navigated his Husqvarna FC 250 back into the top 10 by lap six. He was up to 6th with his sights set on 5th with three laps to go, and made the pass for fifth shortly thereafter. His fifth-place finish puts him at fifth overall in 250SX East rider point standings, just 19 points down of the series leader with 5 rounds to go.

“I felt like I rode with a lot of heart,” said Davalos, “but I was still a little disappointed. I didn’t get good starts. I couldn’t find traction and, unfortunately, it got me caught up in the back of the pack. I fought my way back through the pack and got up to around fourth, but then got caught up with a rider and crashed and was put back to almost last. I was able to fight back to fifth, though. This definitely isn’t over yet. I’m excited to go back home, work hard, and come back swinging in the next round.”