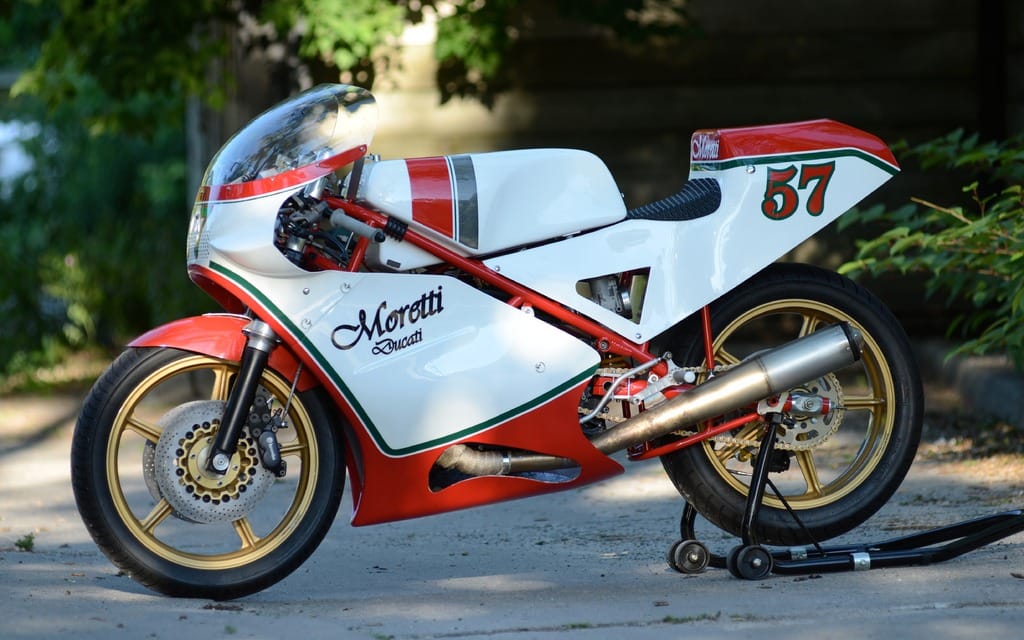 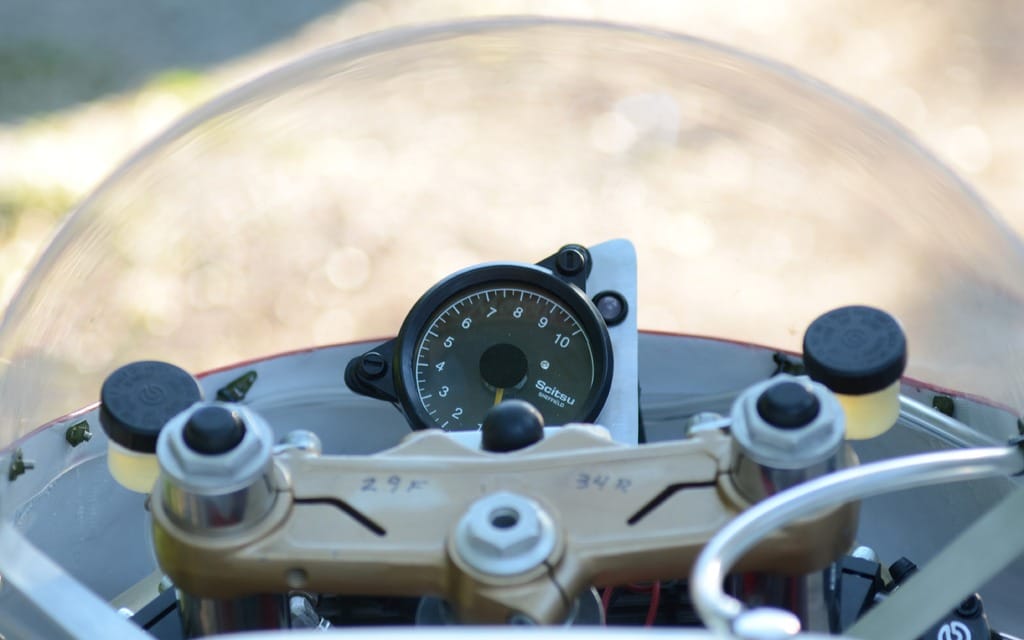 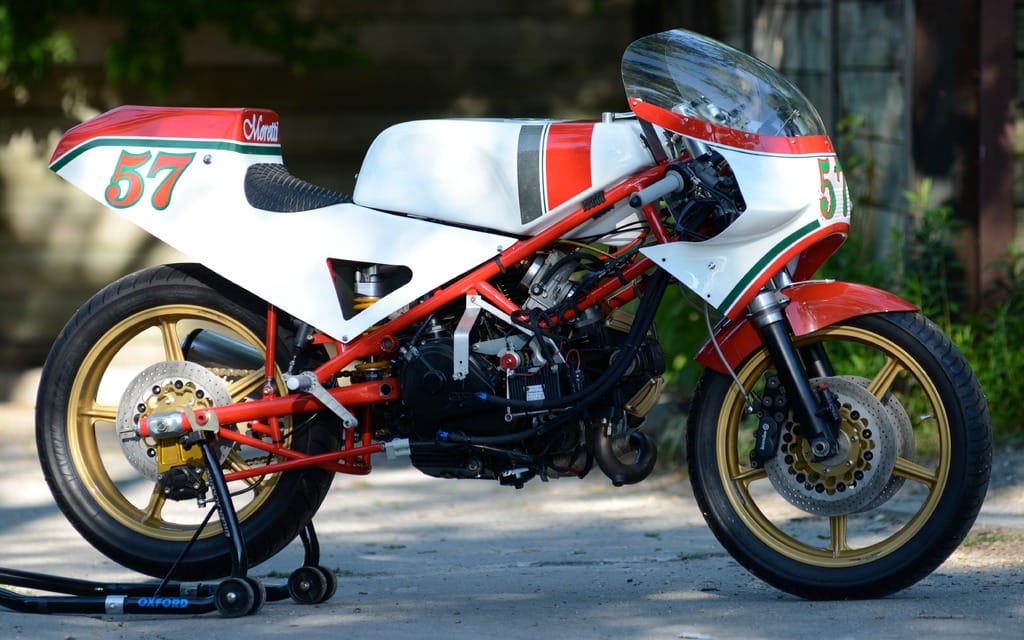 When the rarefied is too common, only the obscure will satisfy

The present – back when it was still the future – was not a forgone conclusion. It’s a mistake we all make, thinking of where we are today as an inevitable outcome of what was. Last July Welshman Chaz Davies won a pair of World Superbike races at California’s Laguna Seca raceway on a Panigale, and that’s how we think of Ducati today: as a brand steeped in racing and as a low-volume manufacturer of Monsters, Multistradas, and Scramblers.

But there was a time when Ducati was a dysfunctional, state-owned company in perpetual receivership — much like the Italian government itself. A 1970s Ducati motorcycle was a bevel-drive-to-the-valves air-cooled engine in a long-wheelbase chassis. The engines were beautiful, but they were insanely labour-intensive to assemble. And whereas the Japanese were about to embrace liquid-cooling and four-valve cylinder heads, Ducati’s lead engineer, Fabio Taglioni, believed in the twin virtues of simplicity and lightness above all.

But history has proven Taglioni wrong. Not that his motorcycles weren’t desirable — many of them were, some insanely so — but motorcycles aren’t theoretical constructs, they’re manufactured objects that must sell amidst intense competition. When it came time to design a new engine to replace the bevel twin, Taglioni maintained the 90-degree angle between the two cylinders, stayed true to air-cooling, and kept to one intake and one exhaust valve per cylinder. His nod to modernity — and to lowering manufacturing cost — was to ditch the elegant bevel shafts in lieu of automotive-style toothed belts to drive the overhead cams. Taglioni also proved to be the ultimate company man. His adoption, in his early years at Ducati, of the desmodromic system — which dispenses with traditional valve springs for the expensive-to-maintain system that positively closes and opens valves — became the gift that keeps on giving for Ducati service departments the world over.

Taglioni’s new engine first found a home in the 1979 500 cc Pantah, which was a reasonably powerful, reasonably sporty motorcycle, but it appeared to signal the end to Ducati’s interest in creating a high performance alternative to stand against the Japanese juggernaut.

Amid this environment it was easy to see the race department’s development of the 600 cc TT2 (which eventually grew to 750 cc in the TT1) as the swan song for racing Ducatis. Using the Pantah engine as the starting point, the TT2 overcame the engine’s moderate horsepower output (on the shy side of 70) by wrapping the engine in a steel trellis frame and little else. The result was a machine that weighed a little over 300 pounds. (For comparison, a Honda CBR300R — that makes horsepower in the mid-20s — claims 357 pounds.) The TT1 cornered like pure thought: imagine a line through a corner and you’re there. In the hands of rider Tony Rutter, the TT2 was a four-time world champion in the obscure European-only F2 class from ’81 thru ’84.

The passing of time has allowed us to see that Taglioni got it half right. The Pantah engine was the foundation for every Ducati mill of the past 35 years (excepting the clean-sheet design of the Panigale’s engine). The engine in the air-cooled Scrambler of 2015 is so similar to the 1979 Pantah’s that it’s eerie. But it took Taglioni’s retirement and the ascension within the company of a young engineer named Massimo Bordi to complete what Taglioni’s constitution wouldn’t allow him to swallow. On top of the Pantah, Taglioni created the liquid-cooled, double-overhead cam, four-valve-per-cylinder, fuel-injected engine that landed in the 851 Superbike. More than just an engine, Bordi’s masterpiece signalled that Ducati was dissatisfied with merely making motorcycles for the cognoscenti. The 851, and its mechanically related successors (888, 916, 996, 998, 999, 1098 and 1198) became world title–winning machines that halted the Japanese domination of road racing. Massimo Bordi’s engine is the reason that Ducati survived to thrive.

(Lest we appear cheerleaders for the brand, it must be stated that Ducati has — as have other Italian motorcycles — been given very favourable terms in World Superbike competition. Ducati ran its 916-series against 750 cc Japanese fours, and then, when the limit for Japanese fours was boosted to 1,000 cc, Ducati had a fit of pique until it was allowed to run its 1,199 cc engine. Similar stunts have been pulled by Aprilia, which outfitted Max Biaggi’s RSV4 with gear-driven camshafts when the production bike made do with a chain. And, just this year, MV Agusta’s competition F4 was spotted with an engine clasped by billet-aluminum side covers. This in a series officially moving toward a more “production” based formula.)

Paul Hewitt, the owner and builder of the machine illustrated here, has had a long, obsessive relationship with Ducati motorcycles. Hewitt flirted with early four-valve Ducatis — he had an 851 currently owned by ace vintage racer Don Gosen — but has reached back in Ducati’s history as far as bevel-drive twins. In the summer, Hewitt, who is in his 60s but has the legs of a packhorse, pounds out the kilometres on his carbon fibre Cervello or his titanium Bianchi, but in the winter he slips down the stairs to the cramped basement in his west Toronto home and works on motorcycles. Ducati motorcycles.

Hewitt was on his way to building a Pantah-based streetbike when he stumbled across a post on a TT1- and TT2-focused forum. (The Internet: the single best and worst invention to the motorcycle obsessed. So many distractions just a Google search away.) On the forum was a note from a man named Carlo Leoncini, who runs a motorcycle shop in Italy. Leoncini was embarking on a run of 10 frame and body kits in honour of a machine built in 1982 by a man named Domenico Moretti for the Italian domestic racing series. The machine used a TT2 engine supplied by Ducati. (After Tony Rutter’s success, there was demand for complete bikes as well as for engines. As Hewitt notes, “there wasn’t anything wrong with the frame that came with the bike from Ducati, but, just like Moto2 today, everyone has their idea of what works.”)

Soon, the package arrived in the mail, with a tig-welded, chrome-moly frame, a swingarm, footpegs and bodywork. Ducati Pantahs are rare and becoming valuable, but, fortunately for Hewitt, the Cagiva Alazzurra (built by Ducati’s then-parent company) is mechanically identical to the Pantah. Hewitt’s donor 1985 Alazzurra was increased from its original 650 cc to 750 cc, and J Precision in Montreal performed extensive headwork.

Hewitt could have built a conservative engine befitting a man of his years, but that’s not the way he rolls. Big enough to suck a cat off the sidewalk, the 41 mm Dell’Orto carburetors have been modified by Italian company Malossi, who have done so since the TTs inception. What’s the difference between a Malossi and a stock Dell’Orto? “They become more expensive,” quipped Hewitt, though machine work involves reshaping the carb’s bellmouth for increased airflow.

The engine also received new bearings, Carillo connecting rods, and had its external flywheel removed for snappier throttle response (by old Ducati standards, that is). Just about everything in the engine that spins was lightened and balanced, and a pair of 900SS camshafts were tasked with opening and closing the valves.

The build took six months, and though the bike was a kit, it required a multitude of brackets and additional machining to make it whole. Of the run of 10 replicas, Hewitt’s was the first to be completed, which, he says, “Gave me licence to complete it however I wanted.” He had considered painting it celeste green — Bianchi’s signature colour — to match his beloved bicycle. Hewitt’s painter suggested that a colour so intense, given the Moretti’s vast expanse of bodywork, would be unwise. Hewitt heeded his advice. Good thing. In lieu of celeste, Hewitt settled on a subdued metallic white, reminiscent of what Ducati employs today.

Hewitt, when it comes to the details, doesn’t spare the chequebook, and the Marvic magnesium wheels are built to resemble period Campagnolos. Keeping the front wheel from straying is a fork from an early (1989) 851. Out back is an Öhlins TTX shock that would, if you required it to, slot perfectly into a Honda CBR600RR.

And then it was on to the track. But not for long. On the first day out in the third session the timing belt skipped a tooth and the valves hit the piston, with disastrous results. (The head of the exhaust valve — once it was torn from its stem — was spit out the exhaust pipe and never found.) But Hewitt had learned enough in a short time riding to be smitten. “It felt sorted from the beginning,” he says. “You point it anywhere and it’ll go there. And considering how small it is, you get on it and it isn’t that bad.” A downside is that it makes Hewitt’s other bike, a magnesium-everything Ducati 748SP, feel like a bit of a pig. As of this writing the engine has been rebuilt and the Moretti is again ready to go. But what happened to the engine? “Builder error,” says Hewitt. “I squeezed it a little too tight. But I didn’t crash, I stayed upright.”