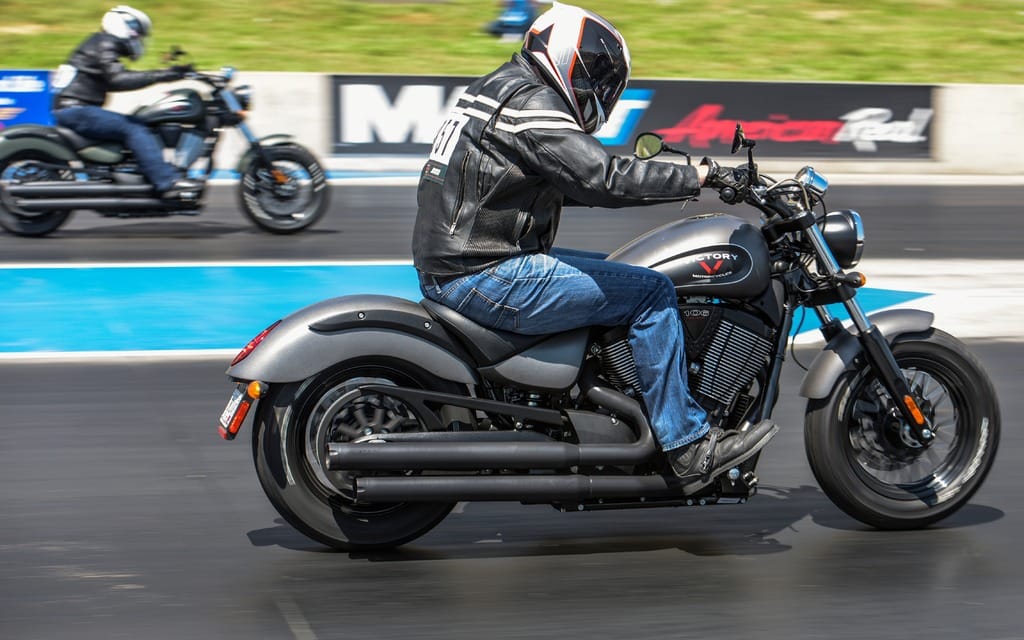 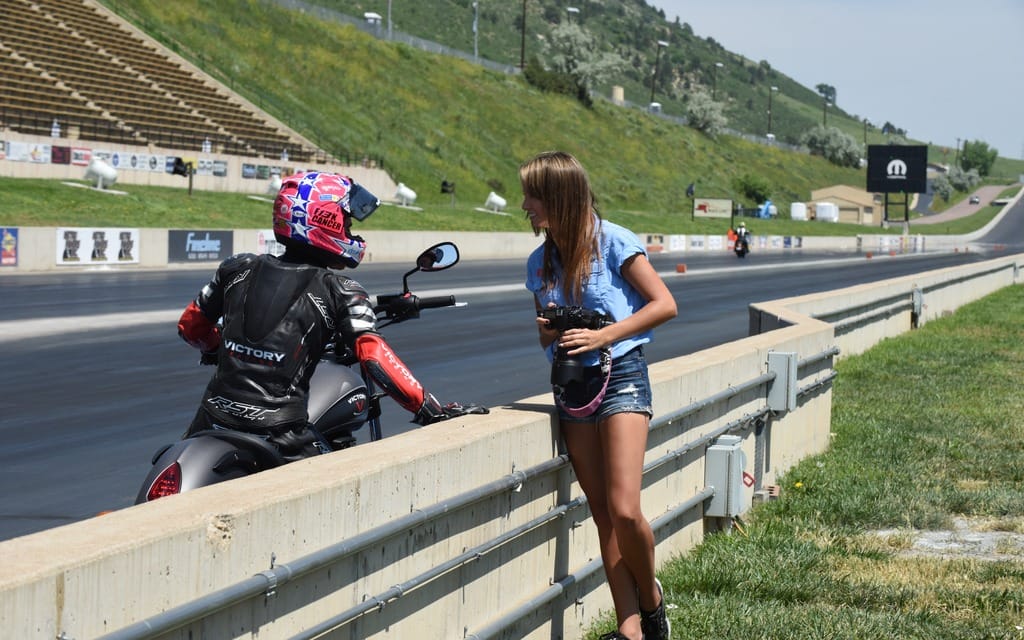 The last time I heard the word drag I’d been asked to slip into a dress and ride an MV Agusta. I fared better this time. At Colorado’s Bandimere Speedway journalists are duking it out in a drag racing competition on stock Victory Gunners.

It’s my first run on a Gunner ($15,499) — and my first drag strip run period. Though I’m calm as I settle into the low single saddle, I can’t help but feel anxious while easing the 16-inch front wheel into the staging area. It takes some effort to hold the Gunner’s beefy clutch lever in, but the biggest strain is mental; I’m completely focused on the starting lights, my mind itching to dump the clutch and twist the throttle to the stop.

My reaction time is quicker than my opponent’s by a tenth of a second, the Gunner surging off the line with the plentiful oomph of Victory’s powerful Freedom 106 V-twin. Acceleration is swift and strong, shifting solid and sure, and I scooch back on the seat and press my chest to the tank trying to become as aerodynamic as possible. Despite my best efforts, a glance to the left reveals my opponent is just ahead. His time and top speed: 14.270 seconds and 150.36 km/h. Mine: 14.555 seconds and 146.98 km/h. Not bad for a first attempt, and not the slowest run of the day.

The winning journalist (who goes a quarter of a second faster than my opponent) is rewarded with a run against Lee Johnston, fresh from his third-place finish at the Isle of Man TT Zero. You’d think a common hack would stand no chance against a pro racer, but you’d be wrong. Johnston proves racing is as much mental as physical when he becomes distracted by a pretty blonde snapping photos trackside. When the lights go green and the eager journalist takes off, Johnston coasts to the barrier for a chat. He loses the race, but wins her phone number.

But he isn’t off the hook. In an unscheduled match, he and his electric race prototype will run against a supercharged Victory Magnum. Now Johnston is all business, the electric bike smoking the bagger off the line and laying down a time of 10.1 seconds with a top speed of 227 km/h (compared to 13 seconds and 165 km/h for the Magnum). In two more runs Johnston’s figures are almost identical, not surprising given the electric racer is simply twist-and-go.

Point proven: the electric bike can perform — but Victory staffers aren’t satisfied. “How about a run against our NHRA Pro Stock bike?” says the man on the microphone. Johnston shakes his head, and for good reason; the result is a forgone conclusion. The Pro Stock bike produces at least double the horsepower (in excess of 300); the electric racer doesn’t stand a chance. Though Johnston’s run is consistent with his earlier times, he’s slaughtered by Angie Smith, who pilots the Pro Stock Gunner to a time of 7.9 seconds at 288 km/h.

Lost in the high-performance hoopla is the fact that bone-stock Gunners performed passably well at the strip — in fact, not far off the pace of the supercharged Magnum. Should you base your decision to buy on the strength of one drag run? I wouldn’t. Better to start with a demo ride and take it from there.