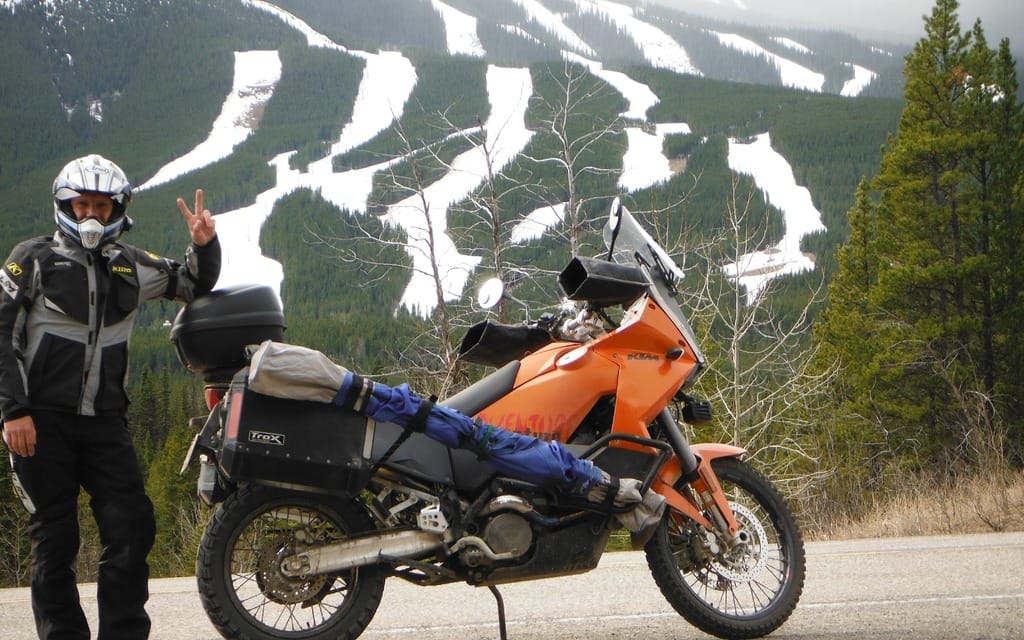 When I moved to Calgary (I’m originally from Toronto), I discovered that there are only two seasons: winter and mosquitos. The winters are long and the mosquitos are large. Were it not for skiing and chinooks, I’d have cracked years ago.

In late March the ski season was winding down and I’d only been out twice. The forecast for the month’s final weekend was for temperatures in the mid-to-high teens; I was torn between a day of spring skiing or throwing the battery into my KTM 990 Adventure and blasting out the cobwebs in the foothills — but how to choose between the two?

Then I remembered the ’80s and my Honda XR250. My parents’ garage was full of junk, including a futuristic living room chair. My teenaged brain decided it would be a good — no, a great — idea to mount the chair on the XR with tie-downs. (The ride was comfortable, but having my feet hovering near the top of the engine made mounting and dismounting difficult.) That experience inspired me to strap my skis to my KTM and ride to Nakiska for some late-season skiing.

A digression: after a decade of upgrading my riding gear at a glacial pace, I was due for a major update. I’d recently picked up new Klim adventure gear for my birthday as a gift to myself. The experience was like walking into Best Buy intending to buy a 42-inch TV, but for only a bit more you can get a 50-inch, but for only a bit more … I’d started at the lower level Klim Overland, and then convinced myself that the Latitude line was warranted, and then ended up with Badlands Pro gear. I reasoned that the fancy new Gore-Tex gear would be ideal for both riding and skiing—which, really, would save me money.

The night before departure I tested options for securing my skis and poles. I reasoned that using a ski bag would be a good idea to mitigate the risk of carnage on the Trans-Canada Highway. I tried perpendicular to the bike against the rear top box, but was concerned it would catch the wind or clip a car. So I mounted them with the grain, wedging the rear lip of the skis through the front crash bar and the other end to the outside of the pannier, which left room between the skis and bike for my leg and enough space to touch down at stops.

In the morning I geared up and left my home on the secondary roads south of Calgary and squeezed in a few speed runs to test the integrity of the attachment setup before hitting the main highway. At 130 km/h all seemed safe and secure.

Here’s the thing about chinooks: they’re warm, but windy. The temperature was 12 degrees, but I was heading into 75 km/h blasts. (The return ride, with the wind, was sublime serenity in chaos, like riding in the eye of a hurricane.)

Within two hours I was standing in the parking lot of Nakiska, changing boots and helmets. Skiing was full spring mode, with dry, granular snow on the hill and sticky spots at the base. My gear was ideal and made me feel heroic on the hill. Vents were open, I had music pumping, and the sun was shining. On the last run (things always seem to happen on the last run) my legs were quivering like jelly and I low-sided on a steep section. The hip, back, elbow, and shoulder protection in the Klim suit meant no bruises. However, there’s a chink in the armour; sliding downhill forced several pounds of sugary snow through my open vents and into the inner lining of my pants where it slowly melted. It was a small price to pay for the adventure on my Adventure.