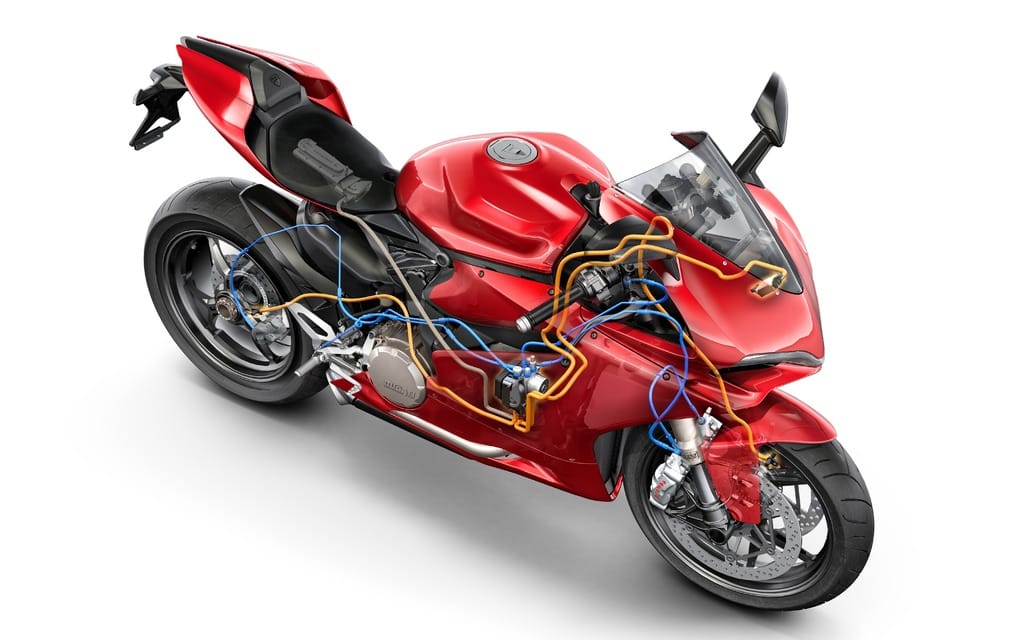 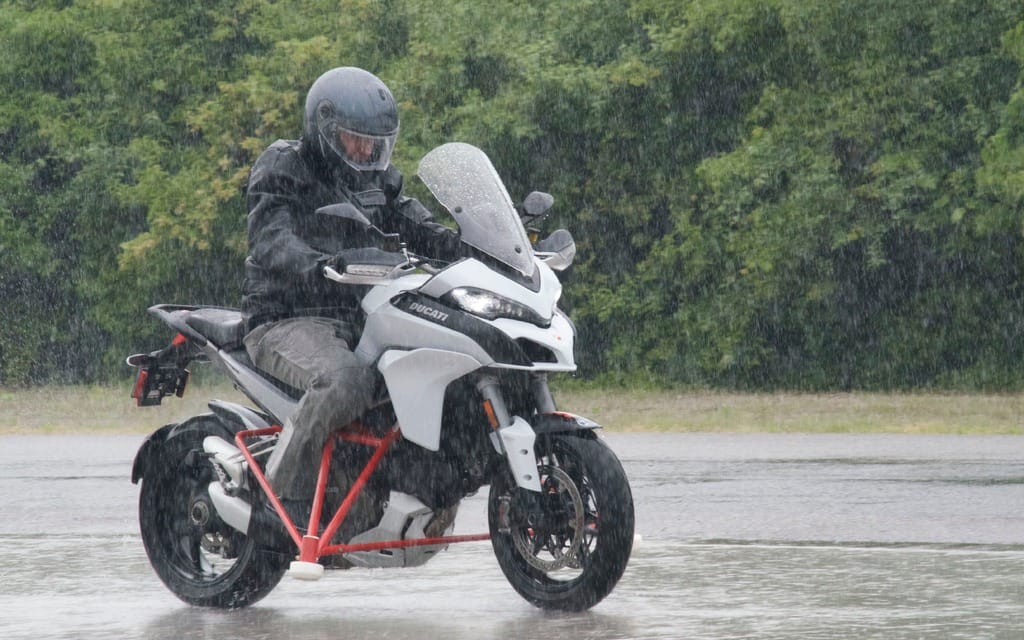 “Don’t put your feet down,” a Bosch test rider warns me. “If you get tangled with the outriggers you could break something.” I assume he’s referring to my bones, not the sturdy steel structures bolted like training wheels to either side of the Ducati Multistrada. I’m to test ABS by barreling towards a strip of slick basalt tile — which has roughly the same grip characteristics as snow-packed pavement — and then hammering the brakes. Sounds easy, though first I have to get the bike off this glorified sidestand without using my feet.

Four stations are set up at the Bosch proving grounds in Flat Rock, Michigan, to test various safety features (wheelie and stoppie control, stability control — aka cornering ABS — and traction control) of the latest Multistrada, though it could just as easily be the Panigale 1299. Or the KTM 1190 Adventure. Or BMW K1600GTL. Or any number of models from a variety of makes. Numerous manufacturers use Bosch systems tailored to OEM requirements.

Bosch began as the whimsically named Workshop for Precision Mechanics and Electrical Engineering, founded in Stuttgart, Germany, by Robert Bosch in 1886. In 1995 the company introduced its first motorcycle-specific ABS, a chunky unit that weighed 4.5 kg. Now they’re the size of handheld cameras. The ABS 9.1ME unit on the Multistrada is 1.6 kg.

Features like wheelie control (regulating engine torque to mitigate front wheel lift during acceleration), stoppie control (bleeding front brake pressure to keep the rear wheel on the ground during braking), traction control (modulating power delivery to facilitate traction while accelerating), and linked brakes (applying the appropriate amount of rear brake pressure when only the front brake is engaged, or vice versa) are commonplace. However, the difference between ABS (modulating brake pressure to prevent wheel lock-up) and cornering ABS (doing the same while scraping a footpeg) is murky. Since regular ABS is comparing front and rear wheel speeds, shouldn’t it accomplish the same thing as cornering ABS, regardless of lean angle? I ask the technical wizards assembled in a Bosch boardroom to explain standard vs. cornering ABS in laymen’s terms. They do their best.

“Within a bike’s contact patch there’s a total amount of force the tire can handle, which changes based on the conditions,” say Bosch. “If you’re going through a turn, all that force is available for turning. If you’re braking while straight up and down, all that force is available for braking. But if you’re braking and turning, now you’re dividing the forces. If you enter a turn and grab a handful of front brake — with standard ABS — you may exceed the force available for the contact patch in those conditions, resulting in a crash. The standard ABS algorithm cannot guarantee cornering stability. Cornering ABS takes into account degree of lean, speed, pitch, and manages the amount of brake force applied so the total force approaches but doesn’t exceed what the tires can handle.” (For example, at a 33-degree lean angle on dry pavement, only 85 percent of the total brake force can be applied. The slipperier the surface, the less force can be applied at the same angle.)

Basically, the more information available to the system, the more quickly and intelligently it can function. Bosch’s MM5.10 sensor makes it all possible by monitoring acceleration, deceleration, roll, yaw, and pitch, updating every hundredth of a second. Not only does this open the door for lean-angle dependent ABS and combined braking, but also lean-angle dependent traction control, as well as optimizing the effectiveness of wheelie and stoppie control.

After watching Bosch test-rider demos, we’re let loose to sample the systems ourselves — well, not quite. This is Bosch, a company preoccupied with safety, and with six journalists and only four bikes, there’s a strict schedule to follow. That means I sit for half an hour before being ferried to the skid pad. Normally sprinklers are used to wet the surface, but they’re not needed today; it’s pissing down rain.

The first pass is panic braking with ABS off, which immediately cocks the front wheel and brings the Multi skidding to a halt on the outrigger’s slider. After exiting the pad and doing an about face (a deliberate action with outriggers attached), I complete the second pass — threshold braking — with ABS still off. The bike eventually comes to a stop, though keeping it upright is difficult and stopping distance is considerable. The same manoeuvres are then completed with ABS on and chattering away like two squirrels tussling on a tin roof. The Multistrada is much easier to handle and stopping distance improves considerably. But you already knew that would happen.

Next it’s wheelie and stoppie control, where, having acclimatized to outriggers, I must remind myself to put a foot down at stops. Bosch — unsurprisingly — forbids us from disabling the systems, though during the demo a test rider proved that the Multistrada willingly hoists the front and rear wheels when unhindered. In Touring mode, with wheelie control at the most intrusive level eight, I dump the clutch, give it full throttle, and the result is … nothing. While the Multistrada springs forth at a very fast rate, it feels smooth and incredibly controlled — exactly as it should. Dialing wheelie control back to level two, the difference is immediate. Under hard acceleration the front wheel lightens and lifts off the ground — though not much — and is set back down as softly as a Victorian governess placing a cup in a saucer, all with the bike charging headlong toward the horizon. Stoppie control is similarly predictable, keeping the rear wheel planted on the pavement during hard stops.

Next is cornering ABS, the system I’m most excited to test — but first a break. As I twiddle my thumbs in the hospitality area, the walkie-talkies of our Bosch handlers crackle. “Ambulance needed at the gravel strip.” A journalist has crashed during his traction control runs and the program is cut short.

It’s one thing to read about what cornering ABS does, another to watch a video, but it’s truly astounding to see how the bike keeps its line and the front doesn’t tuck when the front brake is spiked mid corner. The next step, of course, is personal experience. I’m extremely disappointed I don’t get to test the system today, but heartened at having seen it demonstrated in front of me. Though it goes against an experienced motorcyclist’s instincts, I now have the chutzpah to try it on my own.

As cruel as it sounds, the journalist’s crash is helpful in highlighting the most common cause of crashes: the rider. (He’s OK, by the way, and escapes with a broken collarbone.) Old-schoolers might be suspicious of a system malfunction, but in this instance the rider admits it was his fault. “I was testing traction control while coming out of a gravel corner,” he says, “and didn’t get on the gas soon enough to pick the bike up and the front washed out. It was 100 percent my fault.” He isn’t on the throttle or brakes when he goes down; there’s no way for the system to intervene. The Bosch system doesn’t make the bike impossible to crash, it simply mitigates the risks as much as possible. ABS can help you stop, but it can’t stop you from riding into a brick wall if you don’t hit the brakes.

While critics of such technology claim it’s removing the humanity from motorcycling, Bosch insists its systems are meant to enhance your riding experience, not hinder it; it’s a safety net to catch you in an emergency — when you death-grip the brake lever mid-corner after a kid stumbles into the street — and not a crutch to hold you back. ABS has helped me avoid serious injury — maybe death — more than once. With such high stakes, once is more than enough. I’m firmly in Mr. Bosch’s corner.