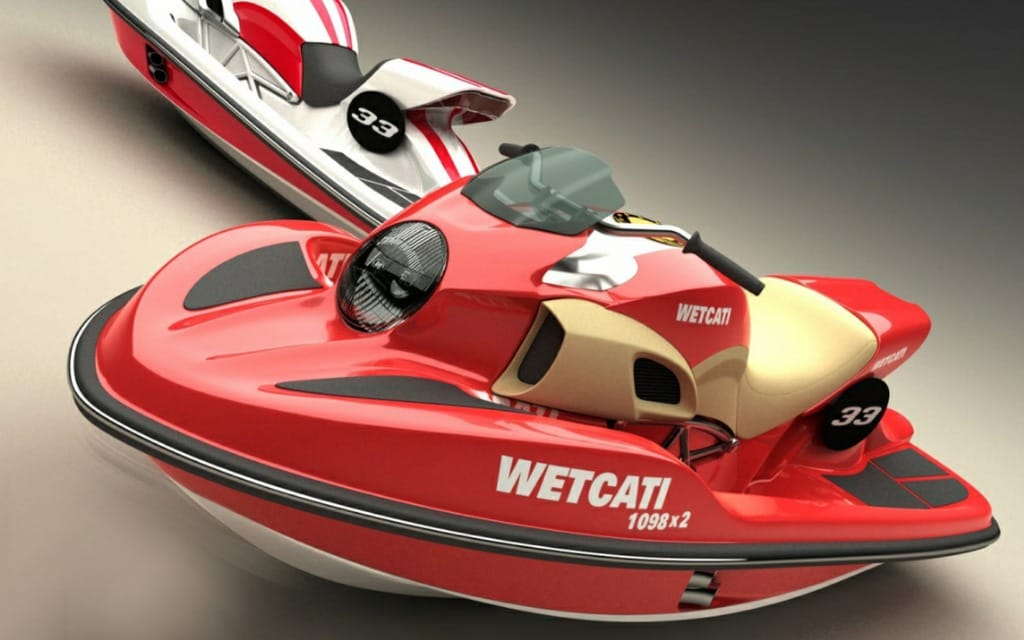 Ducati Diavel taking to the waves, or a burial at sea?

Witness the Wetcati, a wretchedly named personal watercraft concept by Swedish design firm Zolland Design AB. The company was founded by Bo Zolland in 2002 and produces 3D renderings, primarily of boats and cars, and specializes in retro designs (a few … how to put this … interesting takes on the BMW R nineT can be seen at www.zollanddesign.se). Here they’ve defiled Ducati’s don’t-call-me-a-cruiser Diavel — something hardcore Ducatisti won’t be upset about. But even dyed-in-the-wool Ducati sportbike fanatics will feel nauseated after seeing the brand sullied so.

The sloping lines, from tank to seat to tail section, are undeniably Diavel, so too the faux trellis frame and air scoops flanking an ellipsoid headlight unit. And what powers the beast? Two — yes, two — 1,098 cc Testastretta V-twins. Hypothetically (if Ducati’s claims can be believed) that’s 324 horsepower — enough to easily outrun Ogopogo. The inclusion of number plates suggests would-be owners will be racing their Wetcatis. (Last to the yacht club buys the caviar!)

That the Wetcati exists — even as a rendering — is cringe-worthy. Thankfully, according to Ducati’s Nathon Verdugo, we needn’t fear it will take physical form (at least with official backing). “Anyone with a computer can produce renderings,” he says. “The Wetcati has no connection with Ducati whatsoever.”