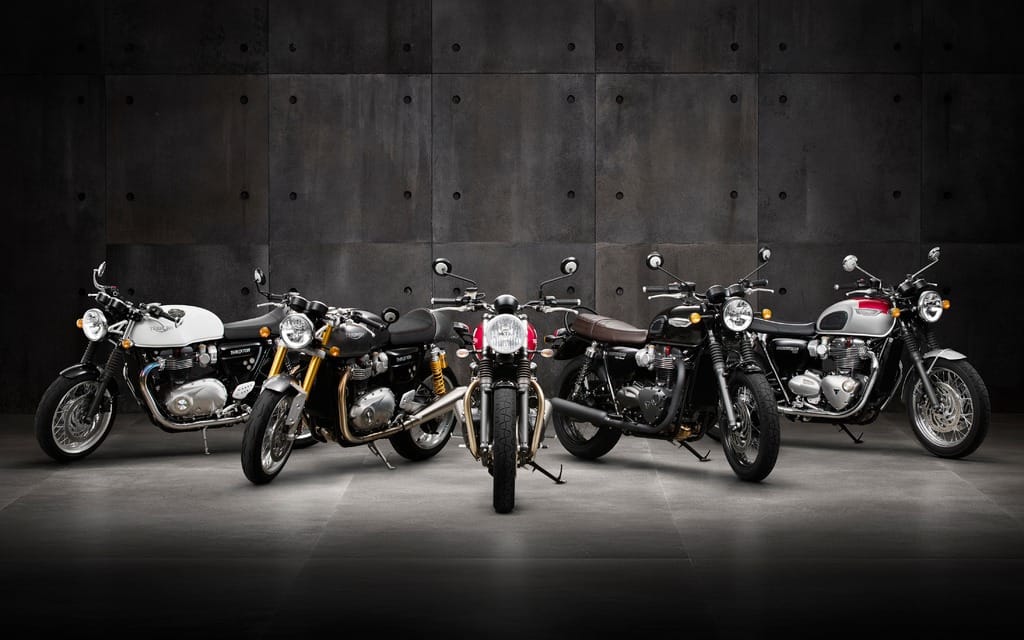 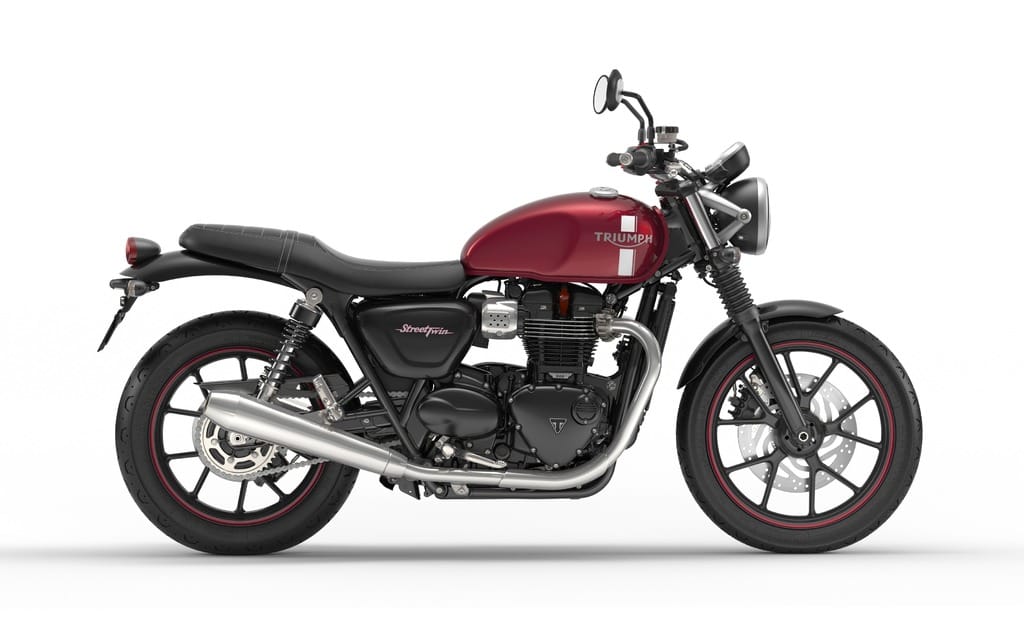 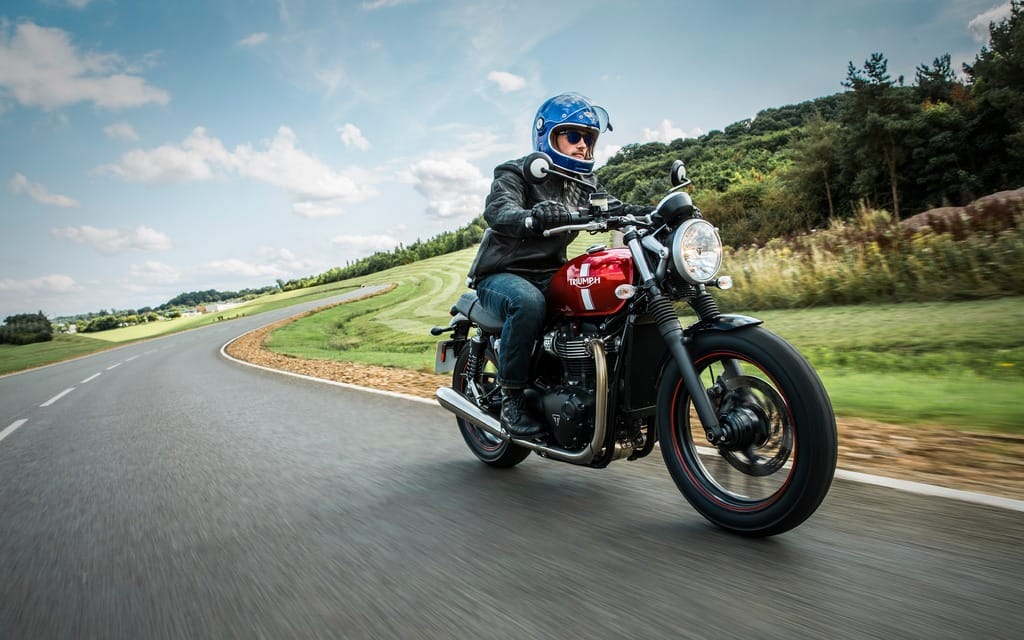 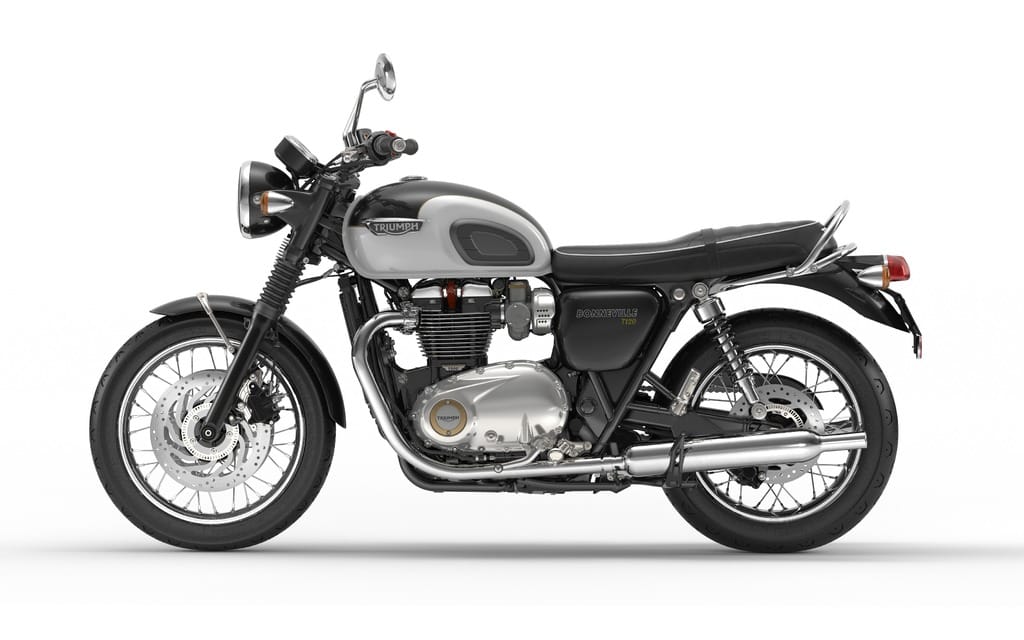 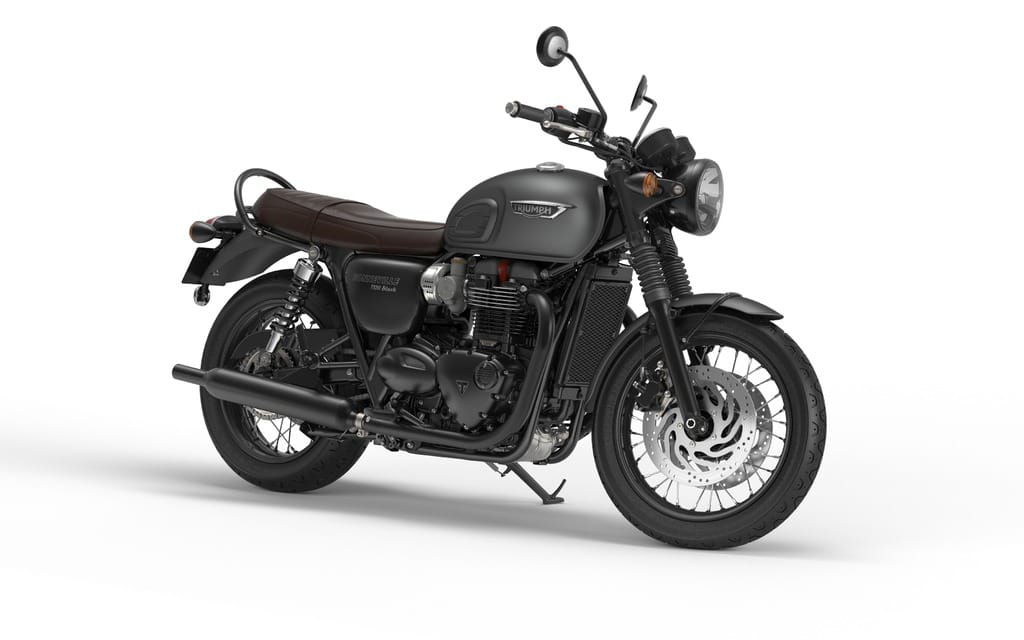 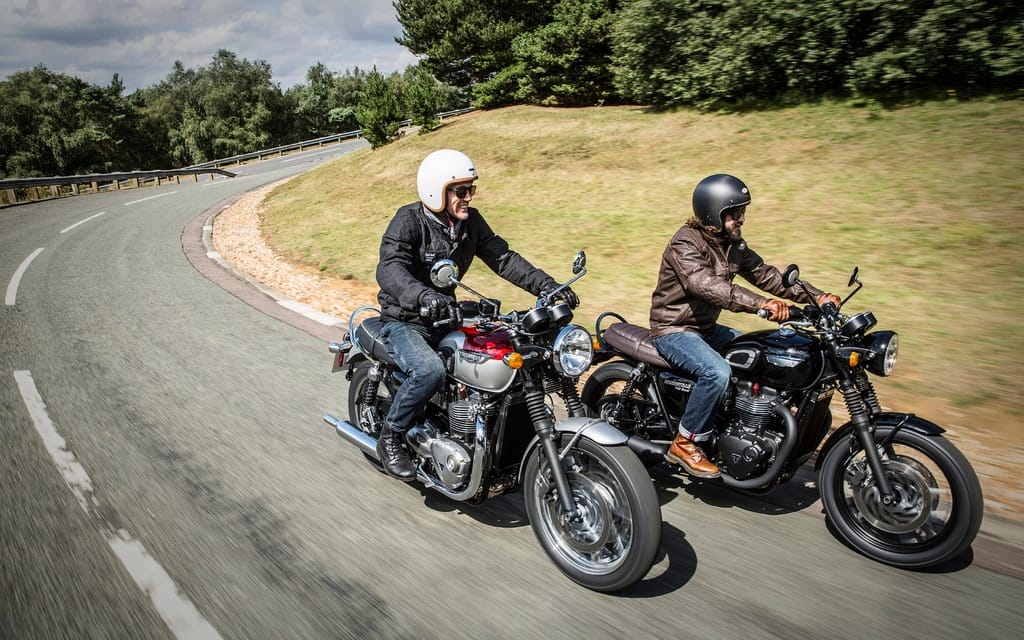 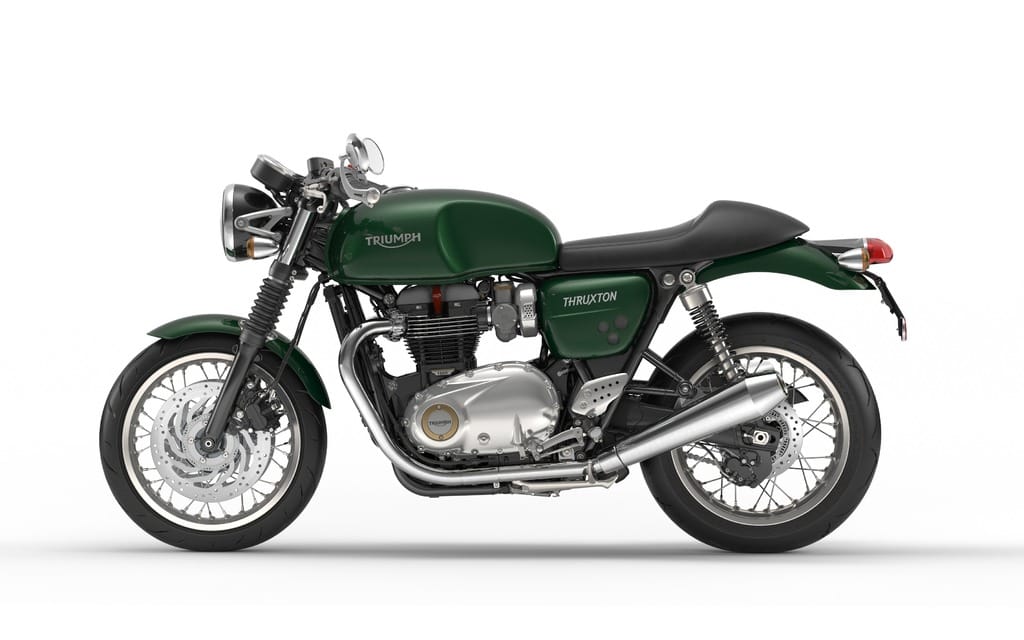 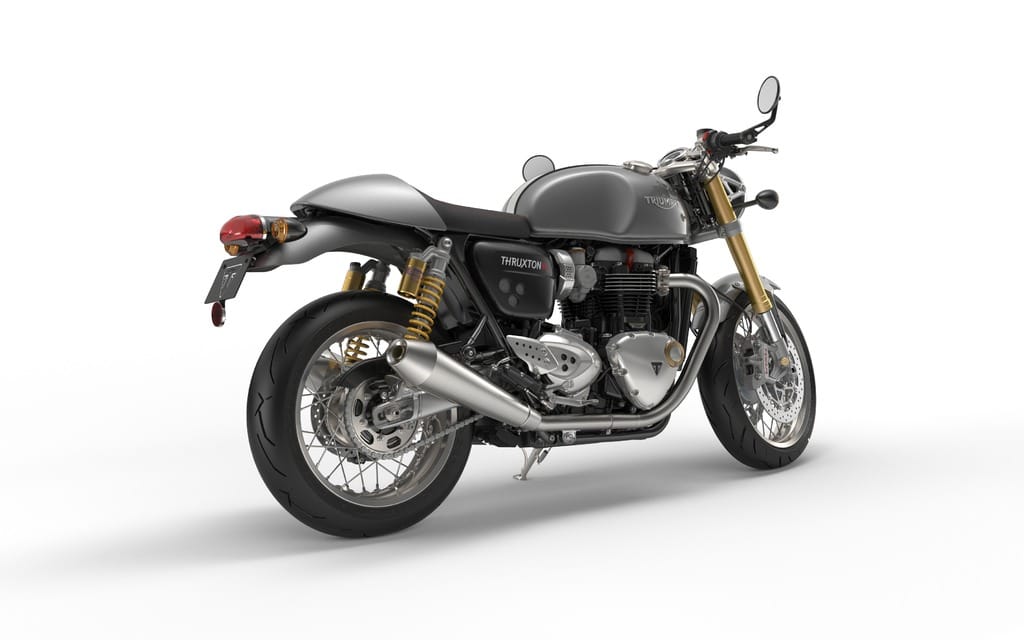 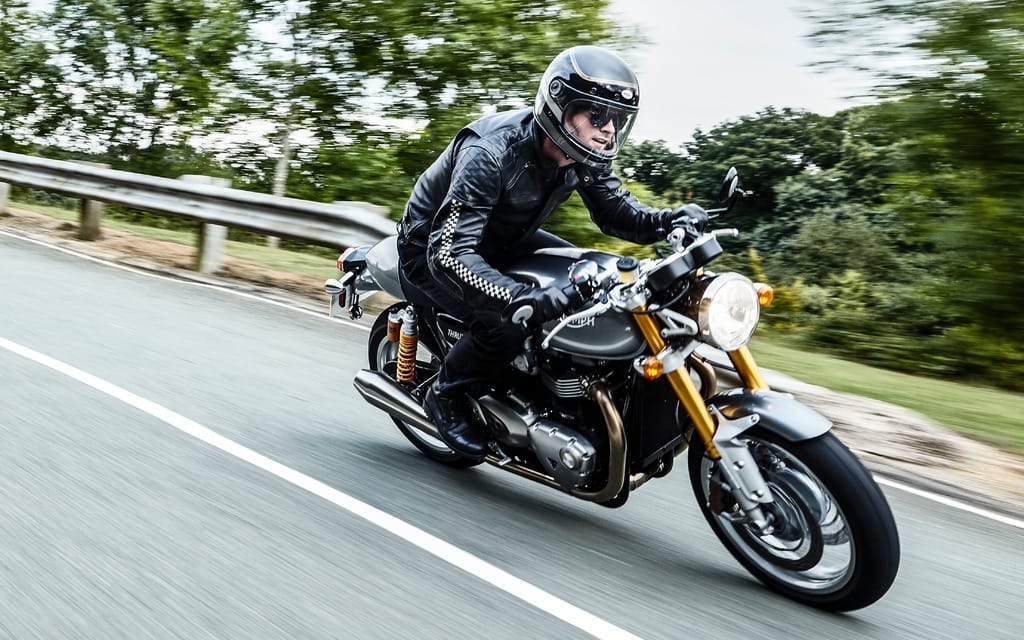 A bevy of bonny Bonnies
Spy shots of a liquid-cooled Bonneville prototype have been circulating the Internet for some time, followed more recently by a Triumph teaser campaign – you know the type, all shadowy shots and dark silhouettes. (We find such campaigns intriguing and maddening in equal measure.) But now – finally – the wraps are off, revealing not one new Bonnie but an entirely new “modern classics” lineup.

Five bikes – the Street Twin, T120, T120 Black, Thruxton and Thruxton R – rolled into a dimly lit event hall at London’s Bike Shed Motorcycle Club on a dusky English day in late October. We were there to see, touch, sit on and consider (but sadly, not ride) the latest iteration of Triumph’s Bonneville line and came away enthused about the evolution of the brand’s bread and butter bikes. (Full specs and pricing for these new, made-in-Thailand Bonnevilles have not yet been released, but can be expected closer to their international press launch dates – December for the Street Twin, February for the T120s and Thruxtons.)

The new T120 was the Bonneville we expected – not least because it was pounced upon by paparazzi months before the official introduction, but also because Triumph is unabashedly fond of its brand heritage, the roots of which can be traced back to 1902. The T120 was the original Bonneville. First introduced in 1959, it was powered by a 649 cc air-cooled pushrod twin producing around 45 hp, the same engine that set land speed records on the Utah salt flats where the bike earned its name. Isle of Man TT wins and AMA championships followed, among other racing accolades, giving credence to the claim that the first generation Bonneville was the British superbike of its time.

After a production hiatus, the Bonneville was reintroduced 15 years ago. It stayed stylistically true to its roots and a punched up engine provided more wallop, but since then it’s remained largely unchanged. While undoubtedly one of Triumph’s most popular models, the previous generation Bonneville gave off a clunky, chunky vibe (the pot-belly-hanging-over-a-belt kink in the exhaust cannot be forgiven) and was, in general, growing long in the tooth – hence the need for a ground-up redesign (one which took four years). The result is three entirely new (i.e. no shared components with outgoing models) “flavours” of Bonneville, each with its own engine and dedicated chassis and suspension setup.

Not surprisingly, those engines are all liquid-cooled. (To the stoic Englishmen out there who’ve just expressed outrage by removing a monocle, raising an eyebrow and uttering an “I say,” fear not; the old-gen 865 cc air-cooled engine is still available in the America, Speedmaster and Scrambler for 2016.) And we don’t mean partial liquid cooling, as in the liquid-cooled heads of BMW’s wet-box, but full liquid cooling for the heads and cylinders. “We’ve embraced liquid cooling,” says Stuart Wood, chief engineer for concepts at Triumph.

Some will scorn the new liquid-cooled Bonnevilles because of their break with tradition (why do we resist change so?), but, in truth, the design is clean and well packaged – better packaged than the outgoing model’s integration of the oil cooler, we think. The radiator is relatively slim and hoses have been cleverly routed to keep the look uncluttered. Some will say those engine fins are now just for show, but, says Wood, they still play an important role in cooling – and in retaining the look of the original.

Amazingly, despite being liquid-cooled and almost twice the capacity, the new Bonneville’s mill somehow manages to better capture the essence of the ’50s and ’60s engines than last year’s model. The key element isn’t necessarily size, but proportion; smaller fins (thank liquid-cooling for that) and a meatier cylinder mean the engine doesn’t need to be gargantuan to reach a given capacity. And everything is tucked in so neatly (Mary Poppins must’ve been involved in the design process) that the bike retains – arguably even improves – the sense of negative space so prized by old-school enthusiasts. In that vein, styling the throttle bodies on the T120 and Thruxton to resemble old Amal carbs is a stroke of subtle genius. Purists may cry foul about a liquid-cooled British twin, but many will change their tune if improved performance claims prove true.

The Street Twin gets a 900 cc “high-torque” twin good for, says Triumph, 59 lb-ft at 3,200 rpm – an 18 percent increase from the previous generation engine. The new mill is also said to improve fuel consumption by 36 percent. Transmission is five-speed, the clutch is a slip-assist unit and cast rims have ten spokes. Modern touches include a ride-by-wire throttle system, ABS, traction control, LED taillight, and a USB socket integrated into the headstock. The Street Twin’s stripped-back styling, says Triumph, is a “contemporary take on the original Bonneville silhouette,” and its upswept pipes emit a “rich, fruity note to match its lively character.” (Are we talking about a motorcycle or a glass of merlot?) Comes in red, silver, and three shades of black. This will undoubtedly be the most affordable of the new Bonnies and is already being labeled as “entry-level” by some publications, but dismissing it as a beginner bike would be a gross underestimation.

The T120 – and T120 Black, a brooding version with blacked-out engine cases, rims and exhaust – ups the ante with a 1,200 cc twin, also “high-torque,” claiming a peak of 77 lb-ft at 3,100 rpm (54 percent more than the outgoing model). In addition to the Street Twin’s niceties, the T120 gets two riding modes (Road and Rain) and heated grips. It also gets a six-speed gearbox, spoked rims and classically styled peashooter pipes. The exhaust is a clever “twin skin” design, disguising the header pipes’ routing through the cat box to achieve a “straight line run” look from front to back. The T120 will be available in red/silver, black/white, red, and black, while the T120 Black comes in black (obviously) and graphite. “The timeless style and iconic character of the original Bonneville is reborn in the classy T120,” says Triumph. In a side-by-side comparison of the T120 with older Bonnies – the 1968 model in particular – we’re inclined to agree.

The Thruxton gets its name from the well-known Thruxton 500 endurance race series of the ’50s,’60s and ’70s. While the previous generation Thruxton was basically a café racer-styled Bonneville, Triumph is attempting to return to its high-performance roots with the new model. At its core, a “high-power Thruxton spec” version of the 1,200 cc twin producing around 83 lb-ft of torque at 4,950 rpm – a whopping 62 percent more than last year’s model. The “low inertia” engine has a lighter crank, higher compression ratio, and freer-flowing airbox and exhaust system compared to the T120’s. The inclusion of a Sport riding mode sweetens the already sweet suite of features on offer – and if that’s not enough, opt for the Thruxton R. It adds fully adjustable suspension (inverted Showa fork, dual Öhlins shocks), Brembo brakes and Pirelli Diablo Rosso Corsa tires to the package. Both have beautifully sculpted tanks with flip-top Monza-style filler caps. Look closely at the R and you’ll see some particularly fetching details – the gorgeously finished top yoke, aluminum tank strap-cum-racing stripe and anodized aluminum swingarm. Considering its high-spec components and extremely high level of fit and finish, the Thruxton R will command a premium price. The standard comes in black, white, or green, the R in red or silver (echoes of the Ducati Sport Classic there).

As you’d expect, accompanying these motorcycles to market is an all-new – and expansive – parts and accessory range. (Triumph says 470 are available between the five bikes. We declined to do an inventory.) Additionally, Triumph is offering dealer-installed “inspiration kits” for each model. You can get the “Prestige” package for your T120, turn your Thruxton into a café racer or your Street Twin into a Scrambler. (Wait a tick; doesn’t Triumph already make a Scrambler?) Accessory exhausts are by Vance & Hines – though, in all honesty, the bikes have a thoroughly throaty note as is, each distinct from the others. A Factory Race Kit, developed specifically for competition use, will also be available for the Thruxton R.

Triumph is hailing its new “modern classics” line as the Bonneville reborn, the future of the Bonneville, not a futuristic Bonneville – and what’s astonishing is that they may actually be right. OEMs often try (and often fail) to recapture and reintroduce the essence of successes from previous eras. The results can be products that are outdated before they make it to market, or clumsily made pastiches of the past. Yet Triumph, it seems, has managed to modernize the Bonneville while at the same time making it more akin to the much-loved bikes of a bygone age. “We wanted to make the new Bonnevilles more powerful, more capable and more beautiful,” Wood says. While the previous generation seems a bit stodgy, the new Bonnies exude sophistication and style, even at a standstill. “Our new Bonneville family takes the legendary story to the next chapter,” Triumph says, “with a major injection of performance and real riding capability, without losing the original character of the iconic Bonneville.” On the surface, it seems a success – though we’ll have to ride them to be sure.