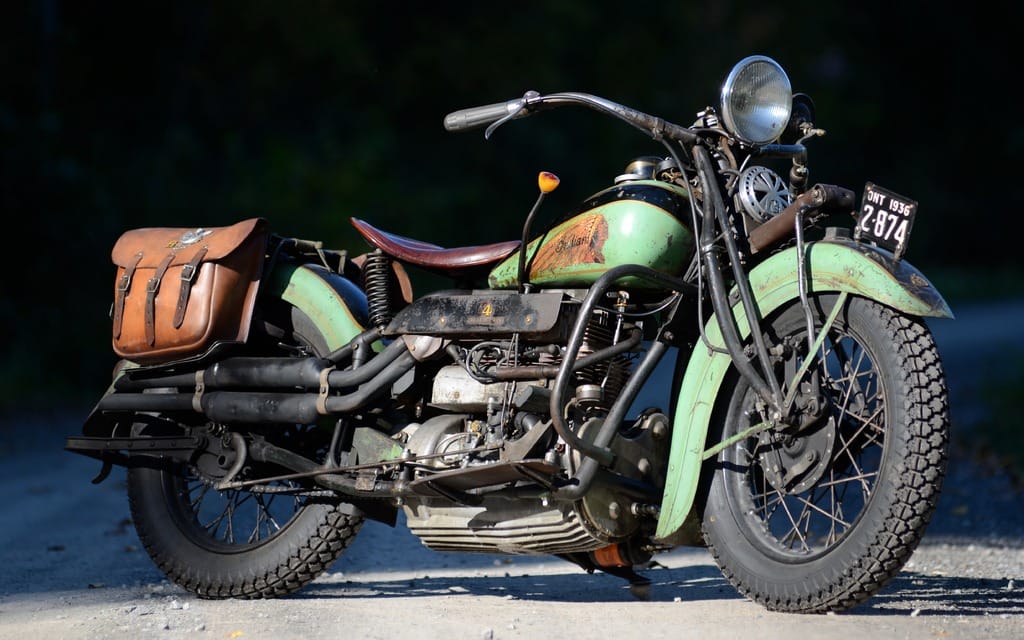 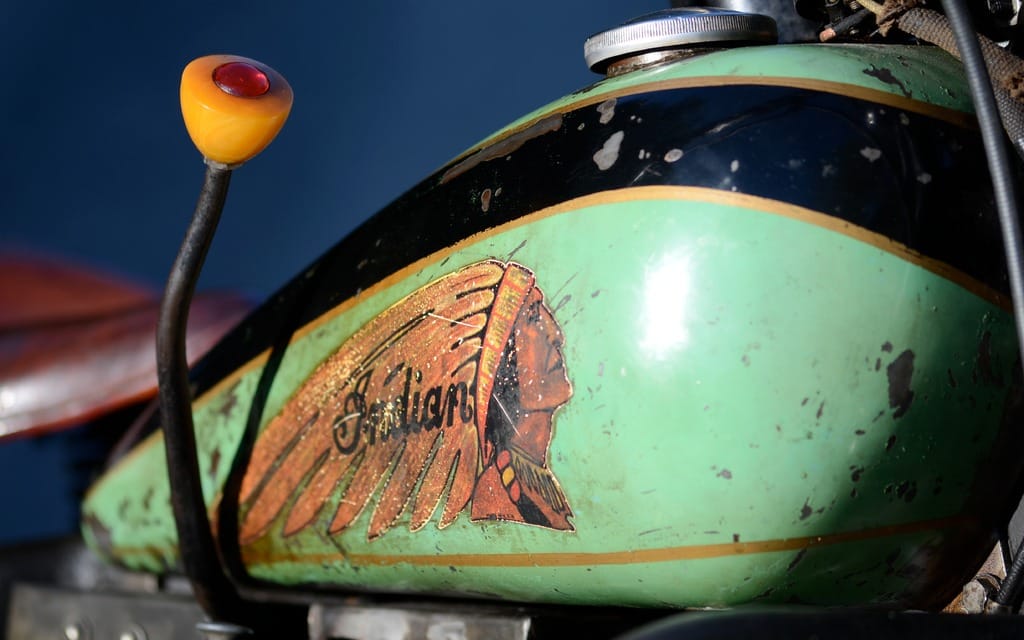 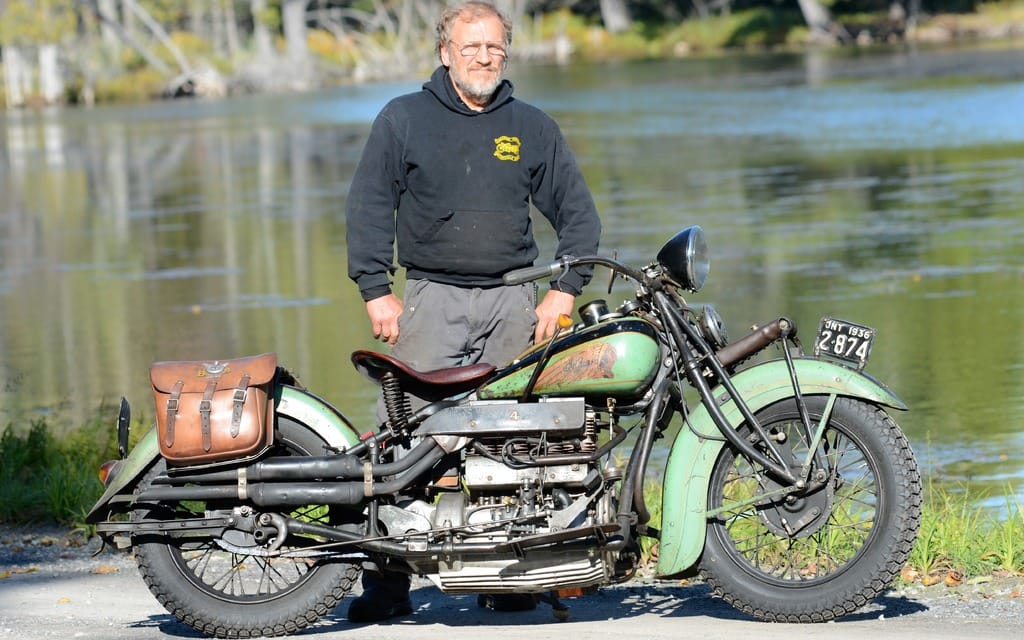 Neil Graham can’t wait to ride The Four, but first he’s got to lose The Jitters

If you’re going to do it, you just have to do it. Procrastinating isn’t going to make it any easier. This is what I’ve been muttering in my helmet for the past half hour as I ride behind Barry Brown and his 1936 Indian Four. Barry has offered to let me ride this bike. I could have ridden it away from the old mill where he lives, but I concocted a story about wanting to watch it glide down the road. And it is a thing to witness. It’s a perfect, early summer day, the air beneath the shadows of trees has just a hint of coolness, like the chill from an opened fridge door felt from across the room. Up ahead, Barry rows through the gearbox with vigour, disappearing around bends and reappearing at the crest of hills. Of all of Barry’s bikes, this is the one that I’ve admired most. And now it’s my turn.

We fuel up at a gas station in the hamlet of Delta, north of Kingston, Ontario. I go to the washroom but I can’t wash the clammy sensation from my hands. I walk back to the fuel pumps and my eyes meet Barry’s. It’s time.

It isn’t the left-handed throttle that intimidates me (with my late father I put many miles on a 1947 Indian Chief); it’s the clutch I fear. Most old hand-shift motorcycles have foot clutches, but most of them have a rocker pedal, similar in appearance to the heel-and-toe shifter on a present-day cruiser. On the old Chief, you’d rock the pedal forward to disengage the clutch and back to engage. A friction plate would (more or less) hold the clutch pedal in the desired position. (It would slowly creep into engagement if you left it disengaged for any length of time, but it mostly held.)

But Barry’s Four has an automotive-style spring-loaded clutch, regarded in folklore as the suicide clutch. Here’s the drill: saddle up, kick-start the engine, roll the left-grip throttle (that does not have a return spring) closed to select a low idle, push the left foot clutch down, firmly (but not forcefully) select low gear with the lever to the right of the fuel tank, and then add throttle while slowly releasing the clutch. Simple. But it’s not. If, when you’re releasing the clutch, your weight inadvertently shifts to the left side of the bike, you can’t put your foot down to stabilize the machine. Doing so will cause the clutch to fully release, the bike to lunge into the gas pumps, the ensuing fire to jump to neighbouring buildings, and the picturesque village of Delta to burn to the ground. (Visit me in prison. Please.)

You can screw up a lot of things in life and recover. But this is not one of those things. I become unnaturally calm, straddle the Four (I confess that I had Barry start it for me), push the clutch down, select first gear, and crawl to the edge of the parking lot. I stop again, check for traffic, and pull out onto the road. I hear a scraping, and look down to see a sidestand not fully retracted. With my toe I pop it up and round the curve onto Main Street, then another curve and the road out of town. I’m in top gear of the three-speed gearbox now, and all I have to do is steer. And breathe. Deeply.

The inline 77 cubic-inch (1,262 cc) four-cylinder engine, because of its longitudinal configuration, is no wider between the knees than a single. And its seat is as low to the ground as a Sportster’s. But my feet aren’t jammed forward on awkward highway pegs or tucked back behind me, they’re down low on footboards. And yet cornering clearance is ample, and the handlebar is just where you’d like it to be. And, due to narrow tires — and despite the Four’s long wheelbase and conservative steering geometry — it’s no more machine to muscle around than a 500 Honda. And that seat. No wonder farmers appear so tranquil in those old photographs. Unfortunately, excess wear in the front pivot joint where the seat mount intersects the frame causes unwanted side-to-side movement.

In the eight decades since the Four was built the interpretation of the word “performance” has changed. Now we want engines that rev vigorously to jump away from stoplights and jolt us to the head of the traffic queue. But in the midst of the Great Depression, when this machine was built, roads were likely worse than they are now. Fewer were paved, certainly, and what was of value to the enthusiast of the day was momentum. I’ve seen the flywheel of an Indian Four, and, by modern standards, it’s laughably huge, like a millstone. But once the engine is spinning, that flywheel preserves energy and shifting down from top gear to do anything other than stop is unnecessary. (It’s the reason that old bikes and cars can get away with three- (and in some instances two-) speed transmissions. If the Four is running, it’s in its powerband.

Barry is the Four’s third owner, and I think about the other two. The first was a man named Chesterfield Wilson, the son of the operator of a Wilmington, Delaware, cruise ship line. The second was Milby Jones, who got the machine from Wilson in exchange for rebuilding two Cadillac automatic transmissions. Barry owned it for more than 25 years before rebuilding it and getting it back on the road.

The Four is smooth even by today’s standards, but 80 years ago when it was new? It must have been otherworldly, next to the singles and twins that dominated motorcycling on the eve of the Second World War. Enthusiasts — all of us, down through the years — have collectively made decisions about what we want motorcycles to be. The process mirrors our own evolution: a popular feature on a motorcycle that sells is improved upon and incorporated into the next iteration. Unloved features wither and die. Arguing against this process — this progress — is useless, and that modern motorcycles are superior to older machines is indisputable. But riding the Four opens a window into what was valued at the time of its manufacture.

Compared to heavyweight cruisers of today, the motorcycle segment that the Four most naturally slots into, the Four is notable for its lack of ostentation. There isn’t a drop of bling on it. The flourishes — and it has them — are understated. The Indian head horn façade is gorgeous, and easy to miss if you don’t take the time to look. And its mechanical bits aren’t styled in the way that modern cruiser engines are. The engine is visually busy, and the brass and aluminum and steel were expected to gain the patina of age.

From the saddle the sensation is one of stateliness and durability. Today we want travel to be rapid, and comfortable, and efficient. In 1936 the buyer of this motorcycle would have been familiar with the age before the horseless carriage. And what is more regal than a man upon a horse? A man upon the Four, gliding down a road in 1936, or in 2015, under a clear sky and with the engine softly humming while the gears of the world slowly churn.