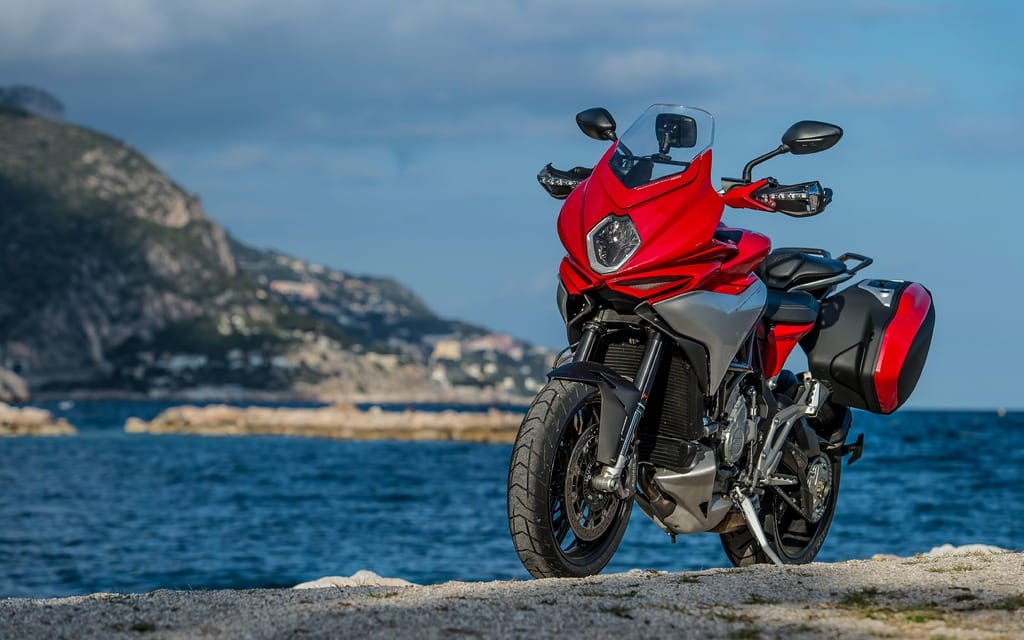 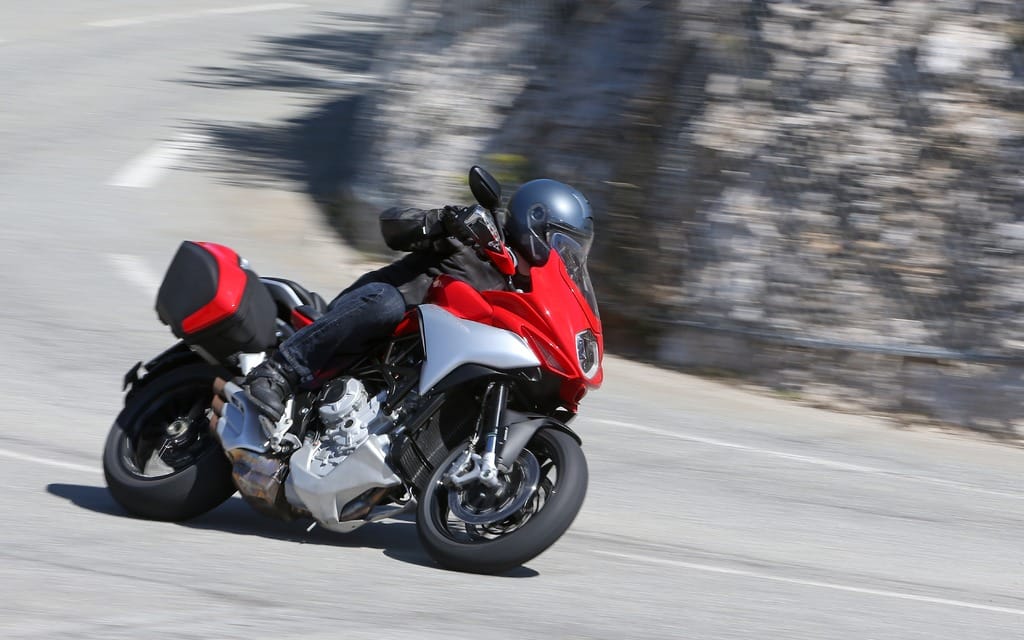 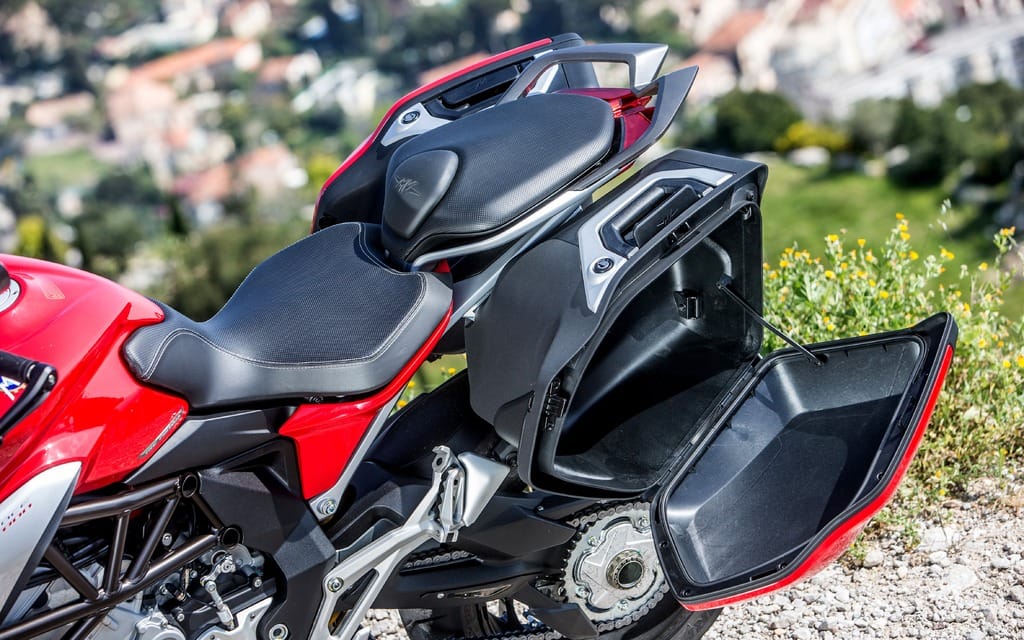 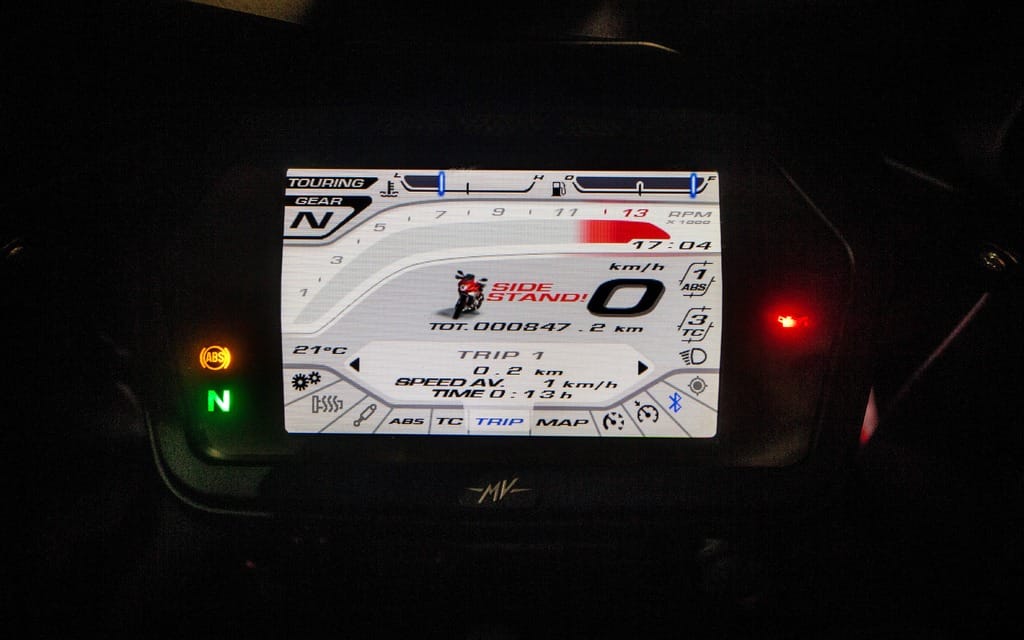 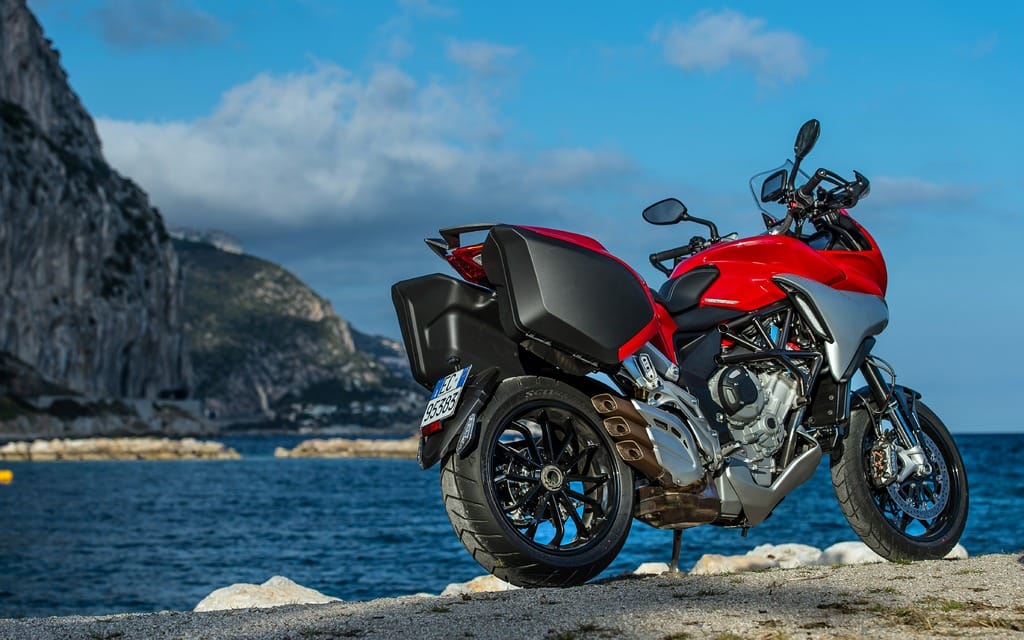 Turismo Veloce is not a knee-dragger’s machine, says world’s most handsome man
“The Turismo Veloce is the bravest bike we’ve made,” says MV Agusta CEO Giovanni Castiglioni, who with his precisely tailored suit, coiffed hair, and ample beard — it’s grown from neatly trimmed to untrammeled since I last saw him — looks like an Italian lumberjack from the Renaissance. (Easy to imagine him felling trees one-handed while making love to a maiden.) “For the first time we did not take inspiration from our titles, legendary riders, or from trying to set speed or power records. We are race guys; to make an MV Agusta touring bike is a great challenge.” And a very time-consuming challenge.

The Turismo Veloce was unveiled at EICMA in 2013. Brian Gillen, MV’s three- and four-cylinder platform manager, claims the initial design was scrapped. “Our goal has always been performance,” says Gillen. “With a new bike, the first conversations we have are about horsepower. For the Turismo Veloce, we’ve completely changed our mentality. The first version had over 125 horsepower. Then we realized we needed to focus on making this bike as user-friendly as possible.”

The Turismo Veloce is powered by MV’s familiar triple, except it’s not; inside are new pistons, camshafts, a different combustion chamber, and a transmission with taller gear ratios that reduce revs by about 2,000 at cruising speeds. But that didn’t mean pulling teeth from the Turismo Veloce’s 798 cc triple. “We didn’t focus on decreasing horsepower (though horsepower has dropped to a claimed 110 at the crankshaft), but increasing torque throughout the rpm range,” Gillen says, pointing out that 90 percent of available torque is on tap from 3,500 to 10,300 rpm. It’s also up 18 percent in the low- and mid-revs compared to MV’s 800 other triples — sorry, that’s other 800 triples — with the claimed torque peak (61.2 lb-ft) now at 8,000 rpm. Making the mill milder-mannered also lowers fuel consumption by 20 percent and reduces vibration — both pluses for a tourer.

There’s more. The steel trellis frame, elegant and airy subframe, swingarm, and wheels were all “developed from zero,” according to Adrian Morton, MV’s chief designer. “The rear wheel has been developed specifically for this vehicle to take into account the increase in weight while touring with passenger and luggage,” he says.

Still not convinced the Turismo Veloce is sufficiently different from MV’s other triples? Don’t tell Gillen. “The Turismo Veloce is not something we’ve turned into a touring bike,” he says. “The carryover content is about six percent — basically the rear sprocket, front brake calipers, the crankshaft, and the engine cases. Everything else was designed and tailored to our vision of what a sport touring motorcycle should be.” That vision is finally coming to fruition — but the first step in deciding whether the Turismo Veloce is a sport touring contender or pretender is a press launch in the French Riviera.

Firing up in front of the Grand-Hotel du Cap-Ferrat, the Turismo Veloce’s pipe emits a sound that’s mellower than its fellows, though still throaty and unmistakably MV. The exhaust system’s capacity is increased, according to Morton, to prepare for future European homologation requirements and to lower noise levels. “You’ll be spending more hours on a touring bike,” he says, “so for comfort reasons, it’s quieter.”

The Turismo Veloce receives new switchgear, with the starter/killswitch (also used to select the engine maps — Sport, Touring, Rain, or custom), cruise control (functions only in sixth gear above 50 km/h), and ABS button on the right, while the horn, turn signals, menu toggle switch, and high beam are on the left. Lighting is full LED and the five-inch instrument screen is a colour TFT unit. The amount of information displayed is extensive, and the layout is busy — though speed, rpm, and gear indicator are displayed prominently. The bike comes with Bluetooth and can be paired with up to nine devices, though during a demonstration an MV staffer is unable to exit the “incoming call” screen and has to turn the ignition off and back on, suggesting there may be a ghost in the machine. Also, switching between engine maps is inconsistent, sometimes changing on the first press of the button, sometimes taking two or three attempts. There are two 12-volt sockets, as well as two USB outlets, to power electronic paraphernalia. I (eventually) select Sport, release the hydraulic clutch — a first for MV — and set off.

That Sport is sporty is immediately apparent — but that’s no surprise; this is an MV. Acceleration is strong and swift, shifting is sharp — especially with the standard quick shifter, which allows clutchless shifting up and down the gearbox, and the front wheel gets light in a hurry when the throttle is twisted. Front brakes are dual 320 mm rotors with Brembo four-piston radial calipers, and the bite is smooth and powerful. Traction control and ABS with rear wheel lift-up mitigation come standard. (In the Rain map, which flattens the torque curve and limits the engine to a claimed 80 horsepower, ABS intervenes early and insistently.)

At 191 kg (claimed dry), the Turismo Veloce is very light, and its compact dimensions and relatively wide handlebar make it a joy to thrash through the twisties around Tourette-Levens. Initially I find the suspension too soft, the bike tending to wallow in corners. Cranking up preload on the Sachs shock improves but doesn’t solve the issue. During our lunch stop a technician increases the shock’s rebound damping using a flathead screwdriver (not included in the spartan underseat tool kit), as well as firming compression and rebound damping on the Marzocchi fork. Handling is much improved, with a flawless descent through first-gear switchbacks as proof.

Before the Turismo Veloce’s launch I’m given a mandate from my editor: try to make it misbehave. We know an MV will go like snot at full stick, but that’s not the way most touring bikes — even sport touring bikes — are ridden. After confirming that it’s fast and can handle, I select the Touring map (claimed peak horsepower reduced to 90) and get comfortable. This comes naturally given the bike’s relaxed riding position. The bike puts you in an upright posture, with knees moderately bent and with ample room for the legs. The grips feel far apart, but the bike is comparatively narrow (900 mm). The seat feels firm enough (though at a little over 200 km, our ride is too short to gauge long-term comfort), but its 850 mm height could be problematic for shorter riders. The windscreen is easily adjusted through three positions using one hand (or would be, if an accessory GPS unit wasn’t in the way). At its lowest setting the windshield sends air to my chest, at its highest to my forehead, and buffeting is minimal.

As for misbehavior, there isn’t much. Release the clutch and roll the throttle on slowly and the Turismo Veloce responds with a shudder, as though it’s disgusted you’d ride in such a restrained manner, but it doesn’t cough or sputter as we’ve found with some MVs. At 80 km/h the engine ticks along smoothly at just over 3,000 rpm in sixth gear. But where it really shines is in that supple, ample midrange, which makes easy work of the Riviera’s ribbon-like roads when rolling on and off the throttle in third and fourth gears. The Turismo Veloce is easily the most well-behaved MV yet.

And what about the panniers, the all-important element of a true touring bike? (They’re an added option on this, the standard Turismo Veloce.) I open and close them each time we stop, which causes some colleagues to question whether I have obsessive-compulsive disorder. Although they take two hands to operate, they function without issue, and, despite their odd-yet-stylish shape, each swallows my XL helmet — but only just. Capacity isn’t really the issue; there’s enough space to cover weekend getaways and short tours. It’s weight that worries me, as each bag attaches to the tail section at just two mounting points. Pack light.

Conspicuous by its absence – not yet available during the press launch — is the upscale Lusso variant of the Turismo Veloce, which adds Sachs semi-active electronic suspension, heated grips, and a centrestand to the standard package. It also gains a built-in GPS module that can log routes and connect with the app — because these days a motorcycle isn’t complete without an app. The Lusso also comes with the pannier system. Well, maybe. “We’re still lacking clarity on whether the North American version will come with bags,” says Tim Massarelli of MV Canada. “The standard should be $18,995 and the Lusso $22,995,” says Massarelli. Both versions should arrive by mid- to late-summer, certainly by early fall — just in time to be broken in and put away for winter.

“I’m not a touring guy; I like supersport bikes,” says Castiglioni. “The first time I rode the Turismo Veloce I didn’t have any experience of a touring bike. I have to say, it’s the most fun bike I’ve ridden. If you want to tour, you can go touring. If you want to go fast, you can go very fast. Let me know if I’ve said a lot of bullshit.” No, not a lot, Giovanni — though a short stint at a press launch isn’t enough to fully evaluate a lot of bullshit — or a touring bike. We’ll need a good long summer tour for that.