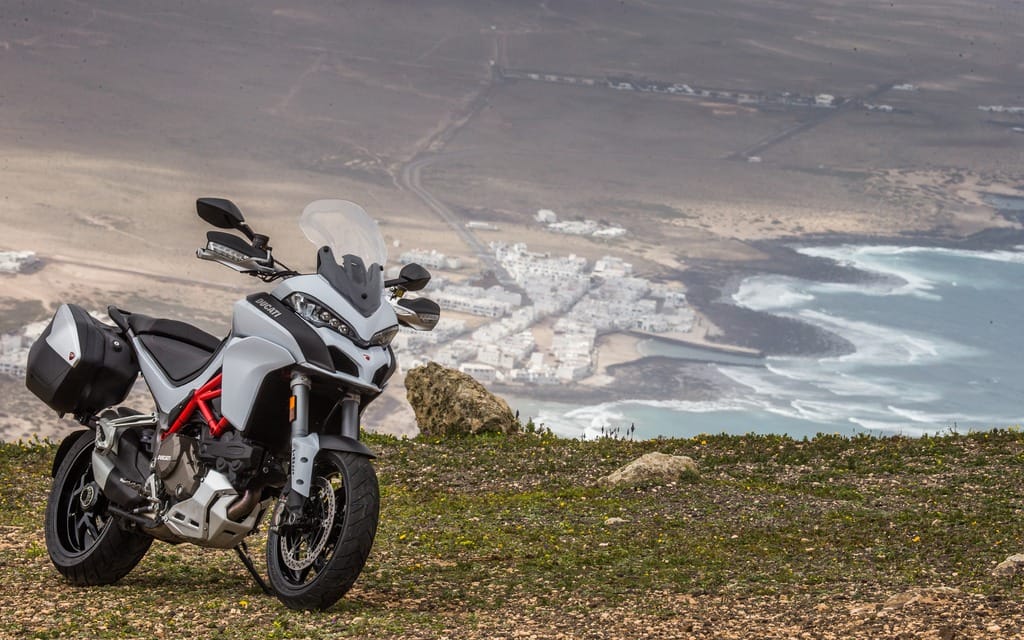 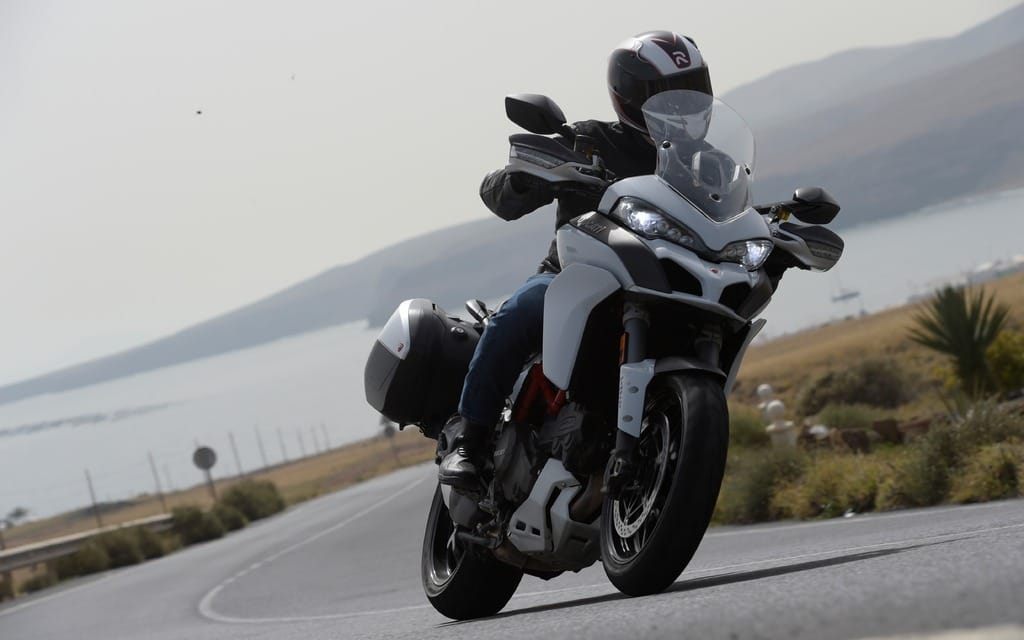 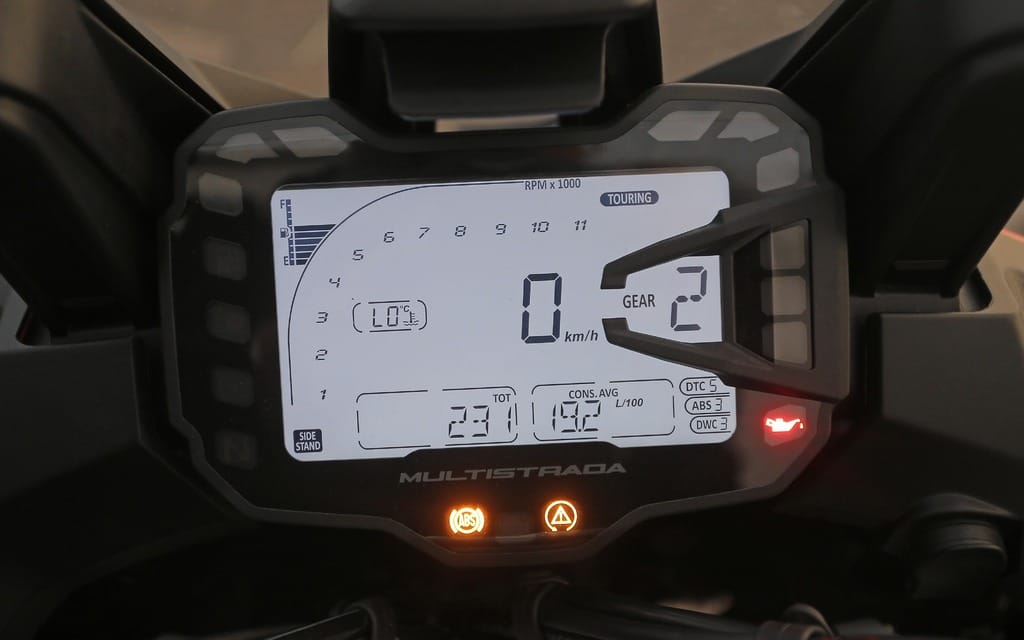 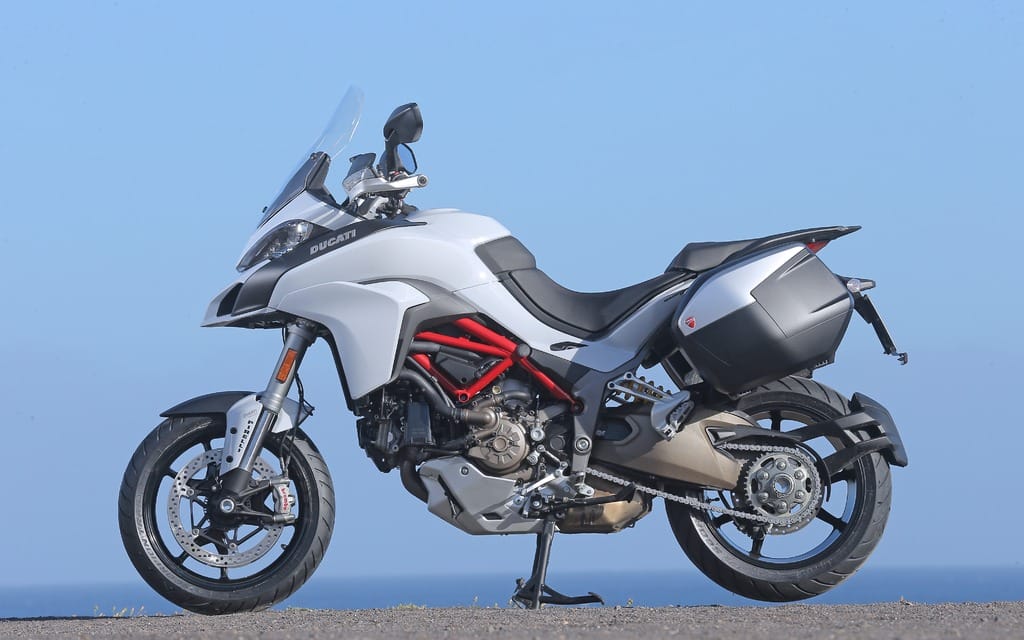 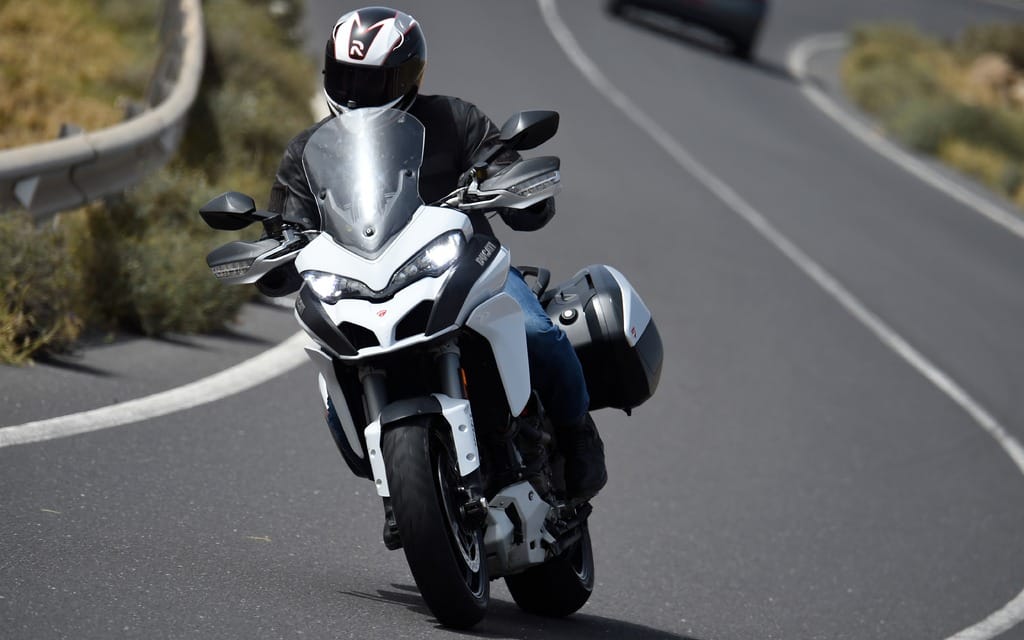 The Multistrada can do it all, quickly, but has it finally gained the civility that has often eluded it?
Ducati says the Multistrada 1200, launched in 2010, “revolutionized the motorcycling world by offering nothing less than four bikes in one.” (Ah, the humility of the corporate copywriter.) This, they say, was accomplished through its four riding modes: Sport, Touring, Urban, and Enduro. Now, following a bevy of refinements to the model, they’re proclaiming the new Multistrada 1200 is “the ‘multibike’ par excellence.” Say what?

One knock on older Multi 1200s was that they were too high-strung for touring and commuting. “Tall gearing and a superbike-derived engine made for a machine that was more go than slow,” wrote Neil Graham in 2012. Those issues were addressed, and by 2013, Graham reported, “The Multistrada can be lugged without complaint.”

But Ducati mustn’t have been content — because engineers were tasked with making a good bike better. They started with the engine, and cooked up the Desmodromic Variable Timing (DVT) system, which is incorporated into the Multi’s 1,198 cc Testastretta V-twin. DVT is a variable valve timing system, with independent control of both the intake and exhaust camshafts. “This optimizes engine performance throughout the power range in all riding conditions,” says Ducati, providing “a continuous sweep from a super-stable tourer to a hypersport engine.” The Testastretta DVT, says Marco Sairu, head of engine project management, is Ducati’s most advanced engine. It claims 160 horsepower (100 in Urban and Enduro modes) and 100.3 (every tenth matters) lb-ft of torque.

The airbox and throttle bodies are also new, as are the headers and silencer chamber in the exhaust system. The Multi now has an Inertial Measurement Unit (IMUs are all the rage right now), and is 20 mm wider at the rad shrouds and 40 mm wider across the fairing. The LCD screen has a sharp new layout, cruise control comes standard, and new switchgear is backlit (fingers, fear not the night!). Ground clearance is up 20 mm to 180, rider and pillion perches offer more “longitudinal roominess,” and the seat is 40 mm narrower at the knees. Seat height is now adjustable between 825 and 845 mm (an even lower accessory seat, switchable between 800 and 820 mm, is also available). Rubber is Pirelli Scorpion Trail II, said to yield higher mileage than plain old Scorpion Trails. Yes, yes, that all sounds great. Can I ride now, please?

Funny thing about riding: it requires riding gear. Mine, save my helmet, is in my suitcase, which was misplaced somewhere between Toronto and Lanzarote, one of Spain’s Canary Islands. (Aer Lingus — which, as I understand it, is also the term for engaging in cunnilingus at altitude — is the airline at fault.) I remove the insoles from the biggest boots Ducati can muster and cram my feet inside. I try to squeeze into a too-small textile jacket — the largest they have on hand — but the zipper grits its teeth and refuses to seal. Then a phone call from the airline; my luggage should arrive this morning, but I must pick it up in person. While other hacks mount their Multis, I’m ferried to the airport in an Audi.

The gamble pays off; my suitcase is waiting beside a surly attendant whose attitude says she’s being inconvenienced by my inconvenience. As we race back to the hotel I fish out my gloves and squirm into my jacket in the backseat. There’s not much time — I’m well behind the group — so jeans (the same I arrived in two days ago) and borrowed boots will have to do. A guide rider is waiting, his bike already idling beneath him. I spring into the saddle of the bike beside him (the $18,995 standard version, only available in red), smile at the familiar and oh-so-comfortable adventure-style seating position, thumb the idiot-proof starter/kill combo switch, snap into first gear, and we’re gone. Lost luggage is never fun, but when life gives you lemons, make Limonata on a Multistrada.

And we do. One thing’s for sure: the Multi’s makers have absolutely nailed Sport mode. We deviate from the itinerary, crisscrossing the countryside at an astonishingly fast pace to gain time on the group, and the bike bombs along with aplomb. Shifting is sure, and the powerband is buttery smooth between 3,000 and 6,500 rpm. Below that range there’s some mild chugging, though nothing untoward for a Ducati, and above it some vibration creeps through the seat, but that’s excused because acceleration is so exhilarating. DVT operates as such a system should: seamlessly and beyond my perception.

Touring mode tames throttle response, but not overly so, and Urban turns this fire-breathing dragon into a composed Italian courtier when the pace calms through villages. Fuelling is spot on, except when it’s not — which is twice, the engine unaccountably shuddering as though running dry of fuel, each time in a different gear and at a different rpm. I replicate the scenarios where the problems happened, but cannot provoke the symptoms of poor fuelling again. (Turns out these are pre-production bikes, and Nathon Verdugo of Ducati North America assures that such glitches will be worked out for production models.)

Sure, you can go fast, but high speeds and a substantial bike (232 kg claimed wet) necessitate strong brakes. Not to worry; stopping power from dual front 320 mm rotors with monobloc Brembos is formidable, and the Multi now has lean-angle-sensitive ABS (Ducati calls it “cornering ABS”). It also has traction control and wheelie control. (Enduro mode limits ABS to the front brake — but without the cornering function — and disables lift-up prevention and wheelie control. Basically, it’s a free-for-all; have at it.) Hammering the front brake, however, sends the Multi’s Lois Griffin-like nose sharply toward the pavement. I find factory presets on the 48 mm fork and Sachs shock too soft. Still, the Multistrada is smooth and composed in corners, and the fork and shock are both fully adjustable — but who has time to fiddle with suspension settings when you’re hurtling through Lanzarote’s languid landscape trying to catch your riding group?

And why bother when there’s a Multistrada 1200S ($20,795, in red or white) waiting for you? The additional $1,800 adds, most notably, a fully adjustable Sachs semi-active electronic suspension system, which automatically adjusts compression and rebound settings on the fly. I catch the group at a rest stop and hop on an S, and now I find no tendency to bow like an English butler, the bike instead squatting predictably under heavy braking. The system provides a plusher ride over rough pavement without sacrificing sure handling in tight corners — truly, its ability to react to rapidly changing road conditions is uncanny, and the bike’s agility belies its size.

The S sweetens the deal further with an up-spec front stopper from the Panigale (a lovely piece of overkill, that), LED headlights with cornering capability, TFT colour instrument display, and the Ducati Multimedia System (fancy-speak for Bluetooth connectivity allowing you to answer or ignore calls and shuffle through Taylor Swift songs using handlebar controls).

As always, there’s an app for that — but it’ll cost you. The panniers pictured (total capacity claimed to be 58 litres) will also cost you — $1,126.20, give or take — as will the centrestand ($310.27), though Ducati offers for both models four accessory packages (Sport, Touring, Urban, and Enduro) that your dealer will happily talk you into purchasing. And if you’re at all interested in a Multi (I don’t blame you), talk yourself into the upscale S version. The electronic suspension system alone is worth the extra cost, and its other features seal the deal.

The Multistrada 1200 is a masterful motorcycle, but is it really four bikes in one? To say it’s sporty is an understatement, and with DVT technology its touring and commuting capabilities are better than ever. As for being an enduro (aka adventure bike), well, that’s the rubber; tight-fitting fenders forestall the fitment of knobby tires, hampering its off-road abilities. If anything, the Multistrada is an honest adventurer — you can certainly blast it down a gravel road, which is about as adventurous as most ADV owners get. Still, three-and-a-half out of four ain’t bad; the Multistrada 1200 proves it’s actually very, very good.