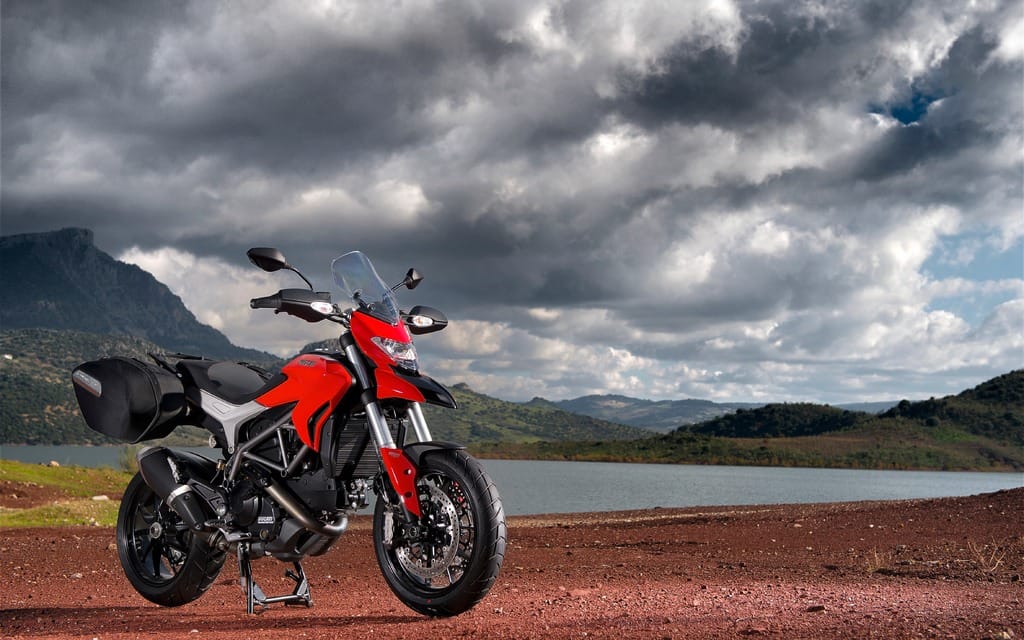 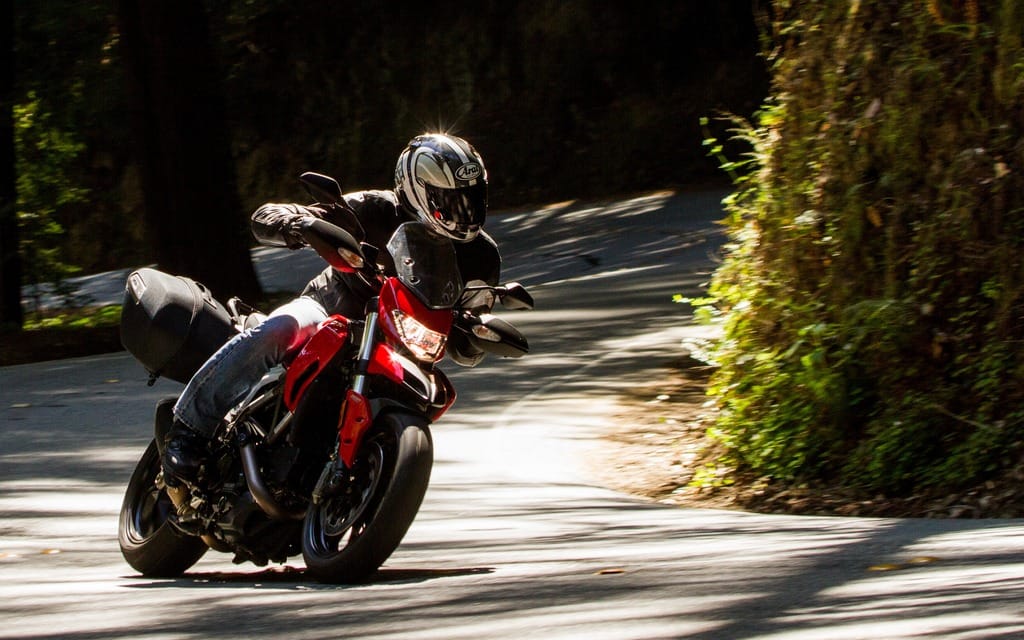 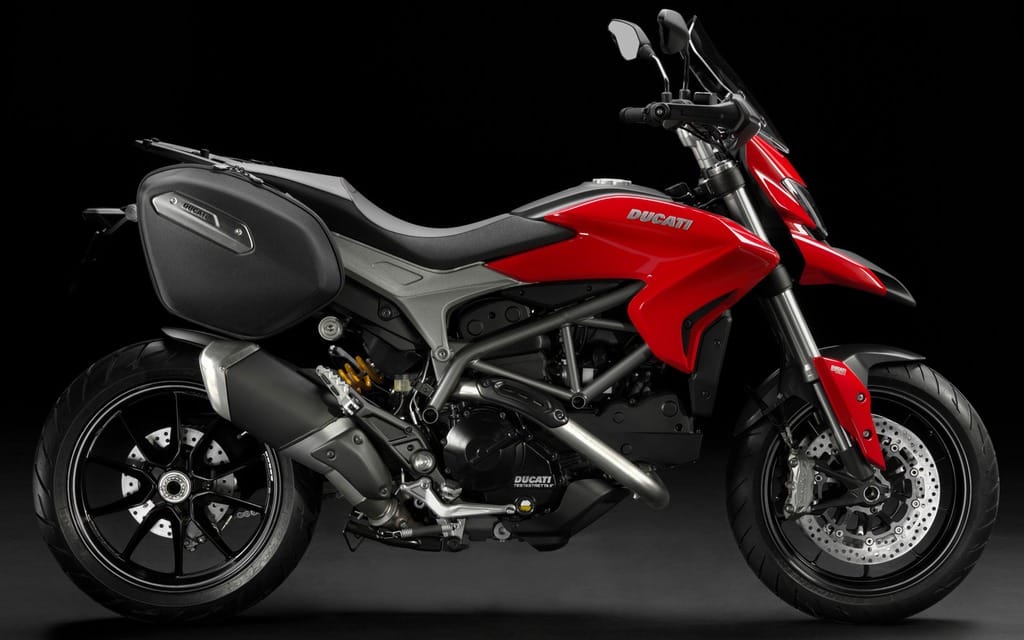 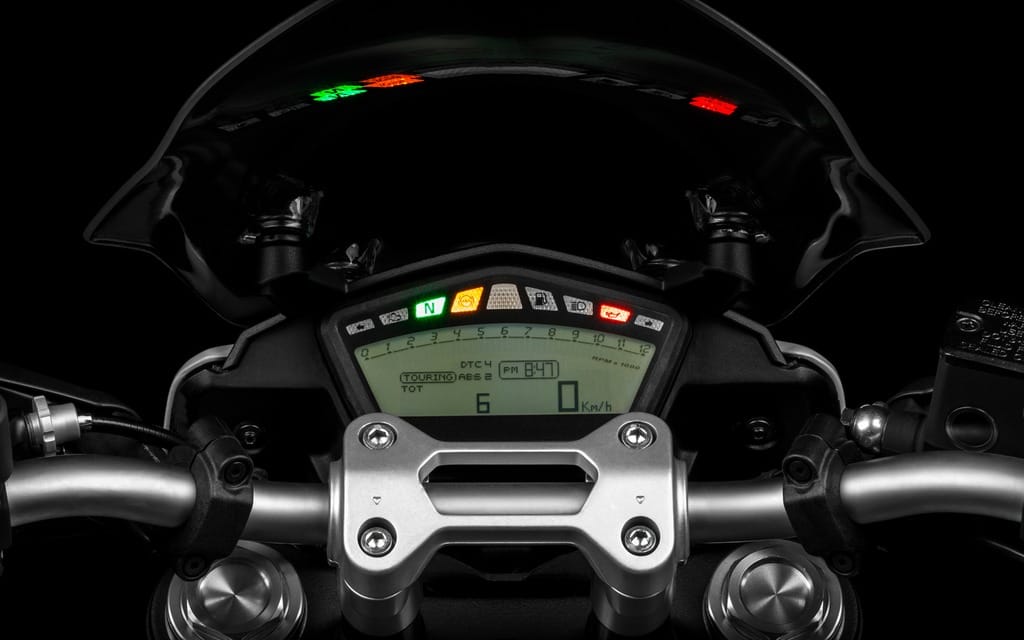 A motard in sensible shoes?

Bologna be praised! The Hyperstrada adds some sense to Ducati’s Hypermotard platform. Because, you know, people have been clamouring for a friendlier, touring-oriented (bags and a windscreen) motard for some time. They haven’t? Well I have, for a few months, at least. Ever since I rode the Hypermotard SP. On paper the Hyperstrada delivers. I sample one between stints on the Scrambler in California to see if it’s the flip side of the SP’s hard-edged coin.

How does the Hyperstrada differ from the Hypermotard SP? The Hyperstrada’s fork and shock are of lower spec, the fork is non-adjustable, the shock preload and rebound damping adjustable only. Its seat is lower (830 mm), wider, and more distinctly sculpted into rider and passenger perches. It has a shorter wheelbase (1,490 mm vs. 1,505 mm) and the triangle of seat-handlebar-footpegs is more condensed, though the Hyperstrada is still upright, roomy, and comfortable. It’s slightly heavier (204 kg claimed wet), and gains an engine sump guard, larger front and rear fenders, a centrestand, and two 12 V power outlets. The tires are Pirelli Scorpion Trail rubber. Oh, and the windscreen and panniers, of course. And at $14,295, it costs nearly $2,000 less than the Hypermotard SP.

But the biggest difference is the Hyperstrada’s attitude, and its effect on yours. It’s powered by the same Testastretta engine as the SP, and produces the same peak performance figures (claimed at 110 hp and 65.8 lb-ft of torque), but Ducati has massaged the mill, made it mellower. The Hypermotard SP is the guy that flies off the handle and gets in a fight; the Hyperstrada the guy that almost gets in a fight, but is sensible enough to be talked down by his girlfriend. Its riding modes (Sport, Touring, and Urban) provide smoother, more refined engine response vs. the Hypermotard SP, resulting in a more relaxed riding experience.

Despite its calmed nature, the Hyperstrada doesn’t disappoint on California’s curves. The clutch is light, shifting is slick, and fuelling well sorted (but it’s still best to keep the revs up). Braking is on par with the SP, and ABS and traction control are standard. And though it doesn’t feel as nervous as the SP (smoother throttle response calms it), it makes me nervous when hustling through the twisties. Its softer suspension has a tendency to squat, lessening cornering clearance, and making sparks fly from the centrestand; a big enough bump could hoist the rear tire off the ground. (I’d make do with just a sidestand.)

Does the Hyperstrada have what it takes to be a serious, sensible tourer? Not really. The bags are smallish, as is the screen — though it does a decent job of keeping the wind off my chest. And the seat, while cushier than the SP’s, locks you in one position. But does it have better touring chops than its Hypermotard hermanos? Absolutely.