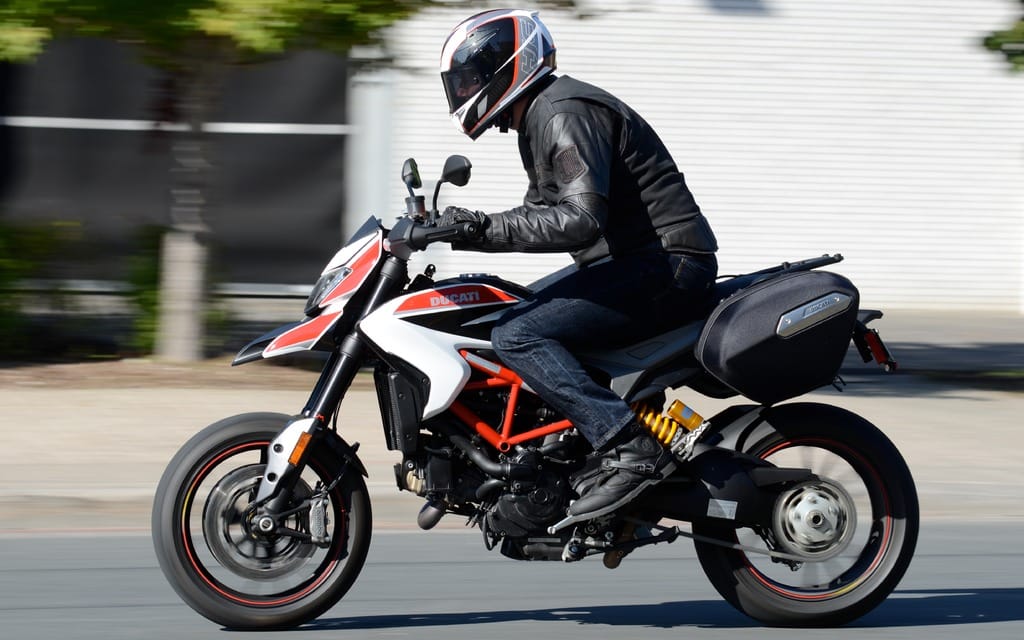 Ducati Hypermotard SP  You got it? We’ll take it

We’re supposed to get a Ducati Hyperstrada — you know, the one with panniers and a windscreen? The mini-Multistrada. We’re to pick it up on Friday, do some photos, and then I’m free, off to a fall fair three hours outside town. It’s a tradition. Every year. I can’t wait.

Then the phone rings. It’s Neil Graham. “There’s been a mix-up. We’re getting a Hypermotard SP.” (Turns out a short-legged journalist snaked the Hyperstrada because its seat is closer to the ground.) But Neil, the SP is without bags; where will I put my stuffed animal? Neil is no longer on the line.

We pull into the parking lot to fetch the bike and find an SP kitted up with semi-rigid side panniers. They add about a grand to the bike’s $16,195, which is $3,000 more than the base Hypermotard. The SP sweetens the deal with spiffy paintwork, an Öhlins shock (the fork is by Marzocchi), 25 mm more suspension travel than the base machine, Marchesini forged rims, Pirelli Diablo Supercorsa SP tires (the standard has Rosso II rubber), a higher seat, and an aluminum handlebar and carbon fibre components that slim it to a claimed wet weight of 194 kg (four kilos less than the standard version). That’s great, but can we get going? The fairgrounds close at 10 p.m.

Climbing aboard — and I mean climbing — I get it why that thieving journalist jumped ship to the Hyperstrada. The SP’s seat is a skyscraping 890 mm — that’s the same height as a BMW R1200GS Adventure’s saddle (the standard’s is adjustable between 850/870 mm). I’m tall, and I just get both feet on the ground.

I turn the key, consider the SP’s small LCD screen (hard to read at speed), and select Sport mode (it’s not raining, and I’m not at Misano, so I pass on Wet, and Race). The 821 cc Testastretta V-twin gurgles to life with a touch of my thumb — but something feels off.

Ducatis don’t like lugging at low engine speeds, but at idle this tester sounds like it’s starving for fuel. I pull in the light clutch, snick the bike into first, and boot it. It sputters and coughs like a bucolic nag, feels sluggish while trolling around at anything less than 3,000 rpm, but smooths out as the engine clears its throat above 5,000 rpm. (The symptoms of improper fuelling persist throughout the test, regardless of mode. A subsequent ride on another SP convinces me the problem was with this particular test bike, though the second SP still protested mildly in the lower rev range.) The SP’s seating position is upright and roomy, like an adventure bike’s. Photographs complete, I’m off to the fair.

And what a riotous ride to get there. The SP summons my inner hooligan whenever the back roads kink, though the front end feels nervous when the curves come in quick succession. It’s a twitchy machine, and riding it is like straddling the hummingbird in Honey, I Shrunk the Kids. The wide handlebar provides lots of leverage, but judicious throttle and brake application is necessary to maintain complete control. Front brakes are powerful monobloc Brembos, and if you’re overzealous with the lever they’ll send the duckbill ducking (though firming up the fork lessens this). You also might invoke the antilock brakes and the traction control — but that’s OK, it’s why they’re there.

The SP’s flightiness is forgiven, however, each time I crack the throttle. Acceleration is crisp — provided I keep the revs up — and 110 claimed horses provide a swift surge of speed. The SP will readily loft the front wheel when given stick, and the exhaust note from that chunky can is positively raucous. Such attributes result in rapture for some, revulsion for others. On a crisp autumn day in late-afternoon light, I’m enraptured.

The ride is enjoyable, but taxing. The seat is unforgiving and my jacket is encrusted with dead bugs when I arrive at the fair. And given the riding style the SP inspires, I fear for my licence on the return journey. As I fill the panniers with as much sweet, sticky loot as I can (which isn’t much), I long for Ducati to make a more accommodating, slightly subdued version of this bike. Maybe something with a windscreen.