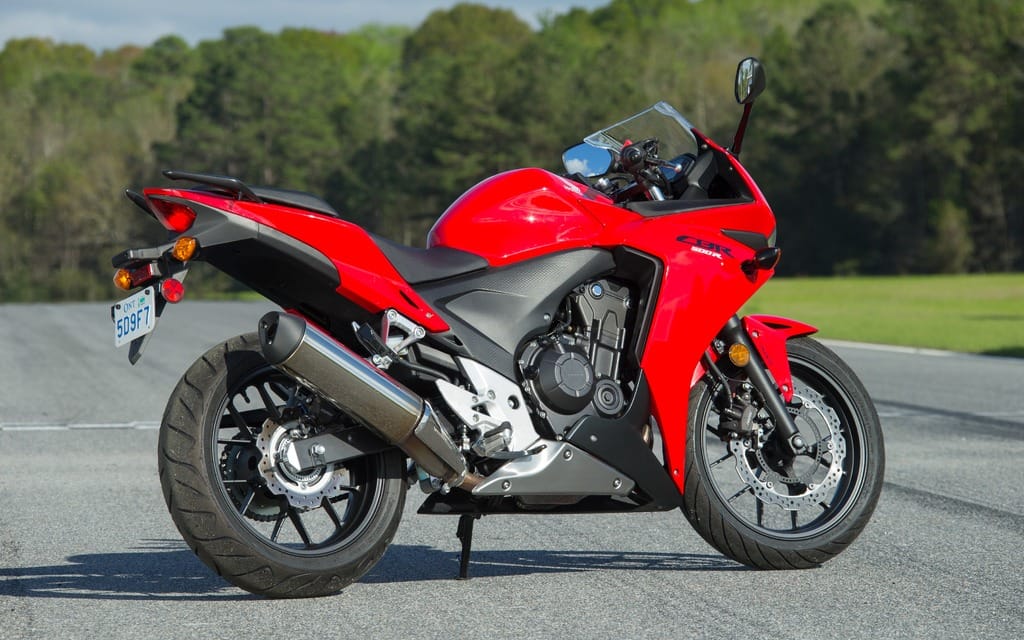 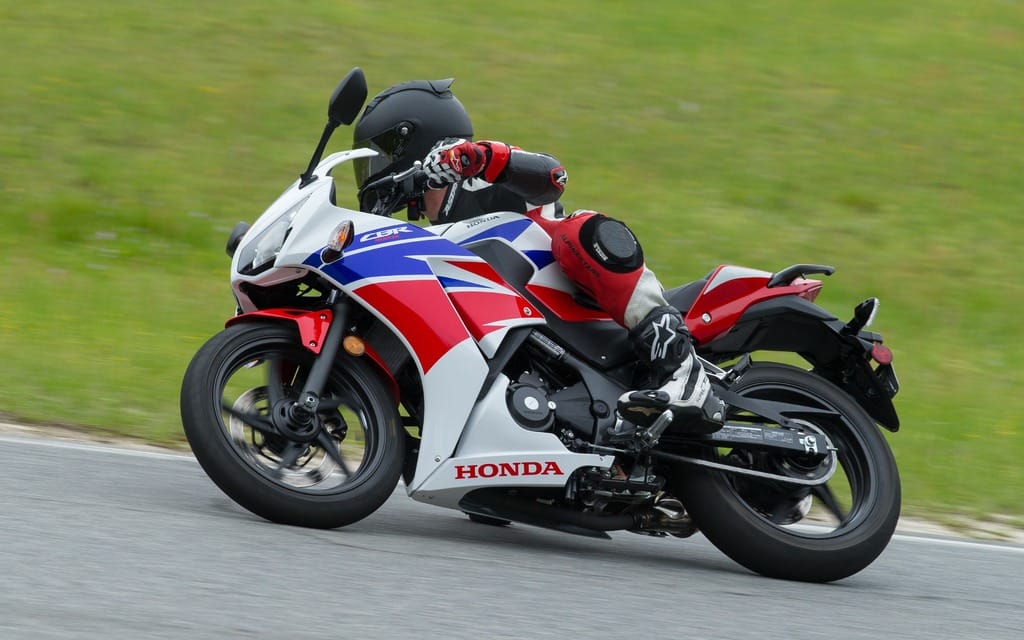 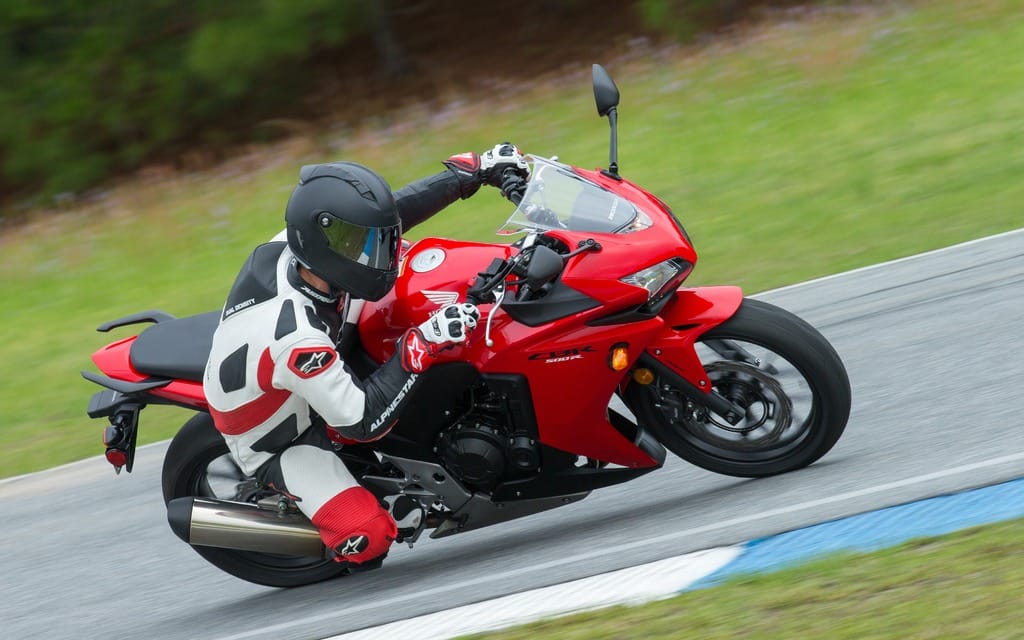 All motorcycles are large. Each and every one. The first time I straddled a bike — a Yamaha Twin Jet 100 — I lifted it off its sidestand and it threw me into the wall of a neighbour’s shed. I clanged my face off a shovel, straightened the bike back up, and was berated by my neighbour for being an idiot. I went home, had my mother dig the bits of gravel out of my face, and spent the next two weeks explaining the deep gouge on my cheek. Size, when it comes to motorcycles, matters.

It’s impossible for those of us with experience to unlearn it. (Until, of course, senility — or worse — sets in and we can’t even recognize our own reflection in the mirror. But let’s be optimistic.) The experienced taunt beginners with things like “Well, now, by-gum, you don’t want to buy that little (insert diminutive motorcycle name here) because you won’t be able to strap a moose to the rear fender and haul it out of the hunting camp on logging roads.” The beginners, baffled by such a statement (they work in IT, live in the suburbs, have never seen a moose, and are vegans anyway), nevertheless defer to the crusty veteran and buy a motorcycle too large and awkward for their nascent skillset. And then one day they lose their footing while wiggling their bike out of their condo’s parking garage and leave a long bloodstained streak on the wall when the topped-up-with-gas machine catches them unaware and whacks their head into the cinderblocks.

Honda’s CBR300R wouldn’t do such a thing. (It could, but it’s unlikely.) Growing out of the now-discontinued CBR250R, the 300 (actually 286 cc) differs from most of its budget sportbike competition in that it’s a single-cylinder and not a twin-cylinder like the Ninja 300 or the new-for-’15 320 cc Yamaha R3. But what does that difference mean to you, the novice rider? Single-cylinder engines tend to make their power at lower engine revolutions, so, for example, when you’re squirting away from a stoplight, you don’t have to wring the twistgrip quite so far to be rewarded with sufficient thrust. The downside? Singles, for the equivalent engine displacement, can’t match the outright performance of multi-cylinder engines. But let us not perpetuate the stereotype and suggest that the Ninja 300 (et al) is a rocket ship and the Honda is a slug. Even with a full-bodied male adult in the saddle the CBR300R will keep up with the flow of traffic on multi-lane highways. It’s a bonus (and not a hindrance) that to duke it out with the psychopathic speed of highways at off-peak hours you’re required to twist the throttle hard to the stop. Flat-out is fun on anything, not just superbikes.

The $5,199 CBR300R can be bought for less if you decide against anti-lock brakes. But, unless you’re an idiot (if you are an idiot seek guidance from a less idiotic family member), don’t even think of buying this bike without ABS. Don’t. If you’re wavering, write me. I’ll talk you out of it. Seriously. When we’re panicking you won’t modulate your brakes. And, believe me, if a truck pulls out in front of you, you’ll panic. I do. We all do. Economize somewhere else — less red meat is a good place to start, and keep away from white bread, too.

The 300s are even useful track bikes. (Remember, there was a CBR250R spec series not long ago.) Keep off those brakes and you’ll be the king of corner speed. In fact, it might be fun to ride one of these to a track day and then ride home again. And, finally, before I move on, a young woman with a formidable inseam asked me at a motorcycle show if lightweight sportbikes (of all brands) were too small for regular-sized people. Although our James Nixon is circus-sideshow-sized (and has dated the woman with the body of a snake) even he can fit on a CBR300R. The sportbike styling is just a ruse, they’re really standards clad in plastic so that your friends think you’re riding a 600 sportbike.

A confession: I believe the parallel-twin 500s (actually 471 cc) from Honda are among the best motorcycles available today. They come in three variants, the fully faired $6,999 CBR500R discussed here as well as in pseudo-adventure and partially naked versions. “Middleweight parallel twin” in the lexicon of Japanese motorcycles has traditionally meant exceedingly pedestrian motorcycles. But the CBR500R is not that bike. Beneath its (admittedly conservative) visage it’s a motorcycle that oozes subtle refinement. From its faultless fuel-injection response to its light-but-not-nervous handling to its rational seating position, it’s a gem. I struggled to name its doppelganger and then it struck me. In temperament and refinement it’s like a two-thirds-scale version of Honda’s wonderful V-4 powered VFR800F. That’s saying something.

Last season we piled the miles onto a CB500X outfitted with knobby tires and metal bags, and it was supremely capable, even if the knobbies were overkill. But if knobbies can be (marginally) justified, then why not sticky race tires? At Honda’s early-spring launch of the ’15 range in Savannah, Georgia, our friends from Pro 6 Cycle levered on a set of race-spec Dunlops, et voilà! Track day bike. Aside from the footpegs grinding at the least provocation, the 500 accounted for itself capably. But the track is not this bike’s milieu.

On the street it’s a smooth, refined motorcycle. I’m tempted to call it — especially in its grey finish — a gentleman’s machine, but what would I know about gentlemanly behaviour? The engine can be lugged from low revs and has a useful, stirring surge of torque as the revs build. The power could be described as abundant, without an overabundance of power that isn’t accessible in normal street use. And that’s not a backhanded compliment — dig hard into the throttle and it’ll march straight up to 160 km/h with ease, with more to give.

Balance in a motorcycle is more difficult to achieve than you might suspect. An athletic motorcycle sampled on clear roads in the South of France doesn’t always translate to a machine that’s enjoyable to roll in and out of your garage. Practicality is rarely a sentiment that instills affection. Honda’s 500s are exceptions to the rule.