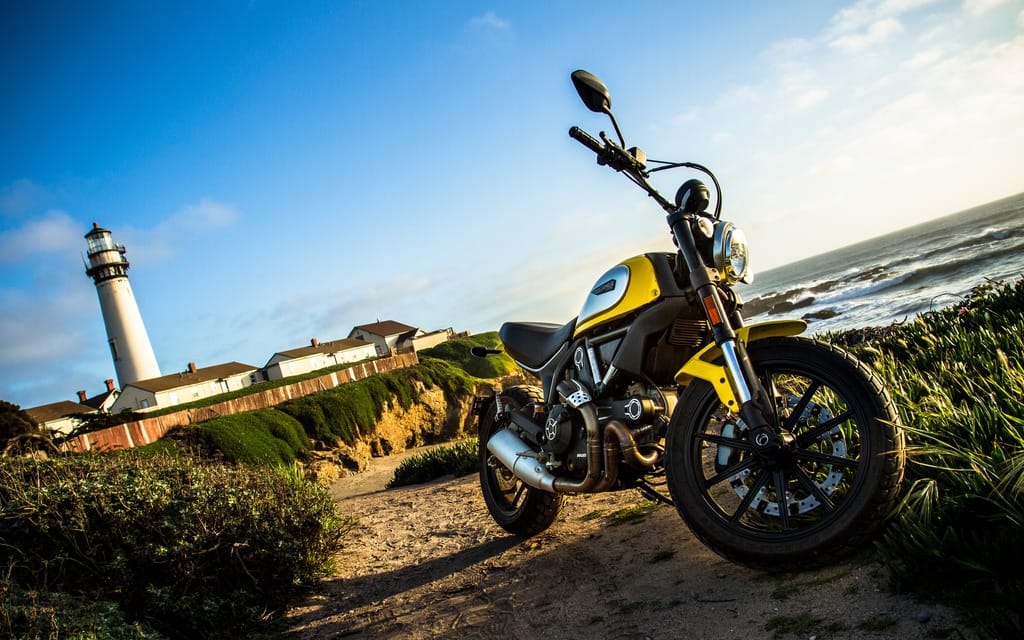 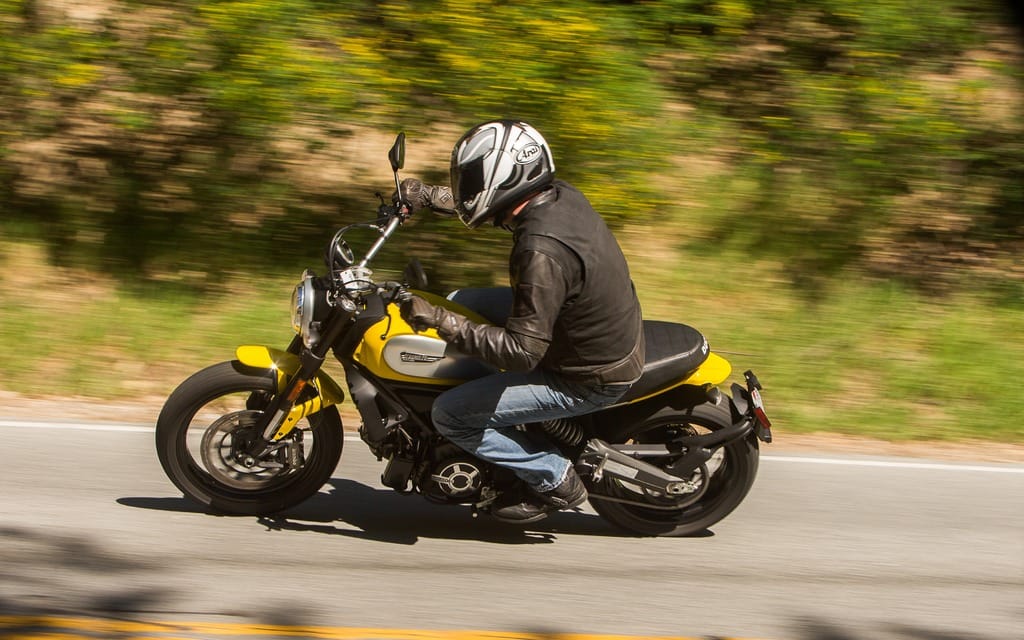 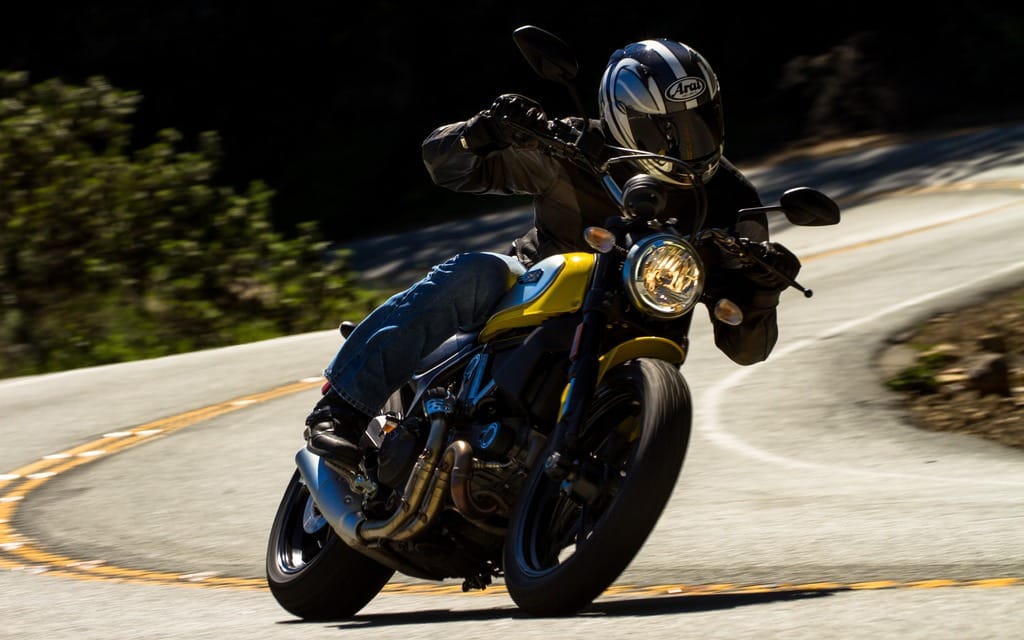 Forget the hype. Forget the absurd pre-launch buildup (which included a no-cameras-allowed viewing for Ducati’s Bologna staff inside a shipping container). Forget the social media buzz and the cheerfully cheesy marketing campaign. Beneath the prefabbed culture and Instagram account, the Ducati Scrambler is a motorcycle — simple, but far from plain.

At least the woman stomping toward us with deadly purpose wouldn’t describe it as plain. “The noise,” she screams. We’ve pulled into what looks like a layby (turns out it’s the mouth of her driveway) to stage for photo passes. I notice the gate in the shadows behind her, and the sign that reads, “Do not even think about parking here.” Too late; we’ve thought about it.

She begins a near incomprehensible tirade — something about how we’re ruining her peace and quiet. I consider the Scrambler idling beside me. The sound from its low-slung single canister is melodious, not odious, and not so loud, really — at least not compared to the Panigale 899 our leader is riding. Sure enough, she surges toward him and sticks a finger so close to his nose she could pick it. “Get out of here! I’m calling the cops!” She disappears into the house and emerges with a phone — not a gun, thankfully. (This is America, after all.) I guess we’re doing photographs elsewhere.

And with the Scrambler — trust me — there will be photos. The bike turns heads everywhere we stop during our two days of travelling in Northern California. As it should: it’s a pretty machine, its simplicity a big part of its understated charm. (The eye-catching yellow paint scheme of the Scrambler Icon — one of four Scrambler variants — makes it impossible to miss.) The design, and the name, hearkens back to Ducati’s single-pot scrambler of the ’60s (“Born Free 1962” is embossed on the gas cap). Ducati describes the Scrambler as “post-heritage,” the idea being that this is what the old models would’ve become had they remained in production.

Its air-cooled engine — the last air-cooled lump in Ducati’s lineup — gives credence to the concept. It’s based on the mill from the old Monster 796, an 803 cc V-twin with two desmodromically operated valves per cylinder that produces, according to Ducati, 75 horsepower and 50 lb-ft of torque. The numbers aren’t remarkable, but — on paper — not much of the Scrambler is remarkable. Steel trellis frame, inverted Kayaba fork, single Kayaba shock, single front brake disc, ABS — nothing fancy here. (Oh, under the seat there’s a USB socket for juicing up your iDevice. So there’s that, I guess.) Sure, it’s a smart-looking bike, but technologically, it’s unimpressive.

Then I sit on it. At 186 kg, the Scrambler is light, and at 790 mm, the seat is low. I’d like more room between the perch and the pegs — something I say about everything besides adventure bikes — but most people will find the fit ideal. The wide handlebar sweeps back for an upright riding posture, and the seat is just the right amount of stiff. But something more than having an ergonomic fit and being easy to handle makes sitting on the Scrambler appealing; somehow, even at a standstill, it feels fun.

Fire it up and the feeling grows. Controls are as straightforward as they come, and there are no modes or traction control settings to select, leaving such things in the hands and feet of riders. The round LCD instrument nacelle is sharp and more legible than most, showing all the usual information (time, odometer or trip meters, speed, rpm), though, unusually, the digital tach swings from right to left along the lower portion of the screen (an homage to the speedos of old Scramblers, which did the same). The unit is offset to the right as if to downplay its importance, placing the road ahead — the ride — prominently in the rider’s view.

The engine burbles in a characteristically Ducati way, but it isn’t overbearing. From the saddle the bike exudes simplicity; amid the technological hubbub of daily life, that’s a good thing. At first I feel like the handlebar swoops up too high, giving my forearms the slightly skyward slant more common to cruisers. But then, when I stand on the pegs to steal a glance at Alcatraz as we cross San Francisco’s Golden Gate Bridge, I get it: the wide bar facilitates a near perfect stand-up riding stance. Couple that with aggressively-treaded Pirelli MT 60 RS tires (18-inch front, 17-inch rear, developed specifically for the Scrambler) and this bike is damn near begging to be ridden off-road, or at least skated around on gravel. Need more proof? ABS can be flipped off.

Clutch pull is light-to-moderate and shifting sure as we stream south along the Pacific Coast Highway. Fuelling is good, and though initially I find the throttle response overly sensitive — I blame this on a just-ridden Monster 821, which rolls on as smoothly as deodorant — once I adjust and become more judicious, the Scrambler’s response smoothens. The sun is setting, the mood is mellow, and while cruising at 75 mph the bike is as easygoing as a SoCal surfer. Sure, the mill has to work for it a bit, but like most Ducati engines it appreciates the revs being kept up.

And that’s where the Scrambler really surprises. When the curves tighten and the pace quickens, I expect our leader’s Panigale to slither off into the distance — but it simply doesn’t happen. Wring the Scrambler to its 9,000-rpm redline and it springs forward with urgency, the pull hard and steady, never peaky. Stock suspension settings are on the soft side (the fork isn’t adjustable, the shock for preload only), but this only serves to illustrate how remarkable the bike’s handling is. It moves around a bit mid-corner during spirited sections, but it’s never unruly or unforgiving. For the majority of riding situations, the suspension setup is more than adequate. Likewise, while a single front brake may seem underwhelming, the Scrambler stops with surety (the four-piston radial caliper is a Brembo, after all). And the level of grip from those Pirellis is simply astounding — but fair warning: there are no peg feelers, and the exhaust will touch down before you run out of tire.

Because of its affability and affordability, both of which put it within reach of newer and smaller-statured riders, this entry-level Ducati is notable. But the Scrambler is much more than that. Newbies won’t soon outgrow it, and seasoned riders won’t tire of it. You can cruise comfortably, or you can absolutely cut loose — the beauty of the Scrambler is that it matches your mood. It’s simple, versatile, and soulful.

The marketing circus surrounding the Scrambler can’t drown out the motorcycle itself. And, in this case, that’s saying something. Ducati says the Scrambler offers an ideal blend of tradition and modernity, and “marks a return to the pure essence of motorcycling: two wheels, a wide handlebar, a simple engine and a huge amount of fun.” For once the copywriters got it right.