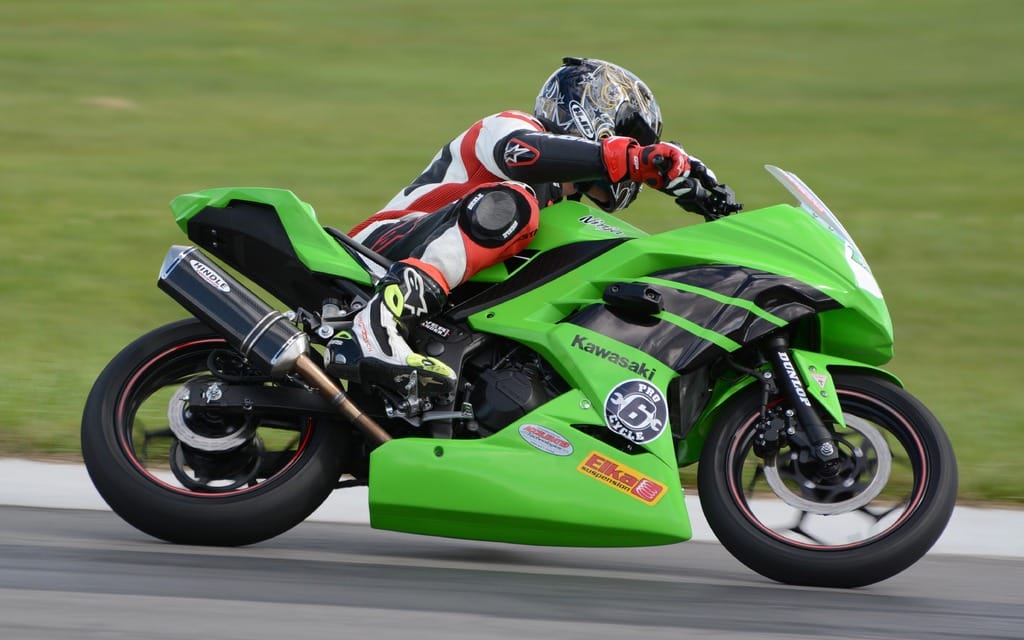 The Mopar Canadian Superbike Series has a new spec series for 2016 that will debut at the season-ending 2015 Mosport round. Honda’s long-time participation as a spec class sponsor — initially with the CBR125R and later with the CBR250R — has ended, allowing Kawasaki to stick its toe back into road racing in Canada.

Last fall I had the opportunity to ride a Ninja 300 mule that tuner John Sharrard of Accelerated Technologies was using to test suspension components. But first I started out on a bone-stock Ninja 300 to get a feel for Mosport’s development track. It reminded me why we’d said such good things about the bike in the past. The Ninja is peppy, handles well, and fits a full-sized rider comfortably — and the eight to 10 horsepower advantage that it has over a similarly stock CBR250R makes you feel like you’re on a real sportbike and not just a sporty bike.

Then it was on to the modified bike. The Hindle pipe adds a throatiness that the stocker lacks, but the biggest difference was the fitment of sticky Dunlop tires. The bike had already been outfitted with a Quebec-made Elka shock and work on the fork was ongoing. Since the stock bike handled so well, I asked Sharrard if the cost of upgrading the suspension was justified. “At street speeds the components are fine,” Sharrard says, then goes on to explain that the rigours of racing can overheat the stock rear shock and lead to a sharp performance falloff. As for the fork, the last inch of travel on a street bike is reserved to deal with unexpected jolts, like potholes. But “road race bikes live in that last inch of travel,” says Sharrard. At the time, fork components had yet to be confirmed, with Sharrard hoping that budget could be liberated to purchase K-Tech (not to be confused with the “as seen on TV” K-tel brand) fork cartridges.

Add it all up: race bodywork, Hindle pipe, Elka shock, a fortified fork, and you’re nearing $3,000 worth of upgrades to a stock bike. Starting with a used bike is one way to save money, but the best approach is to contact CSBK.ca and get your name down for one of the 25-or-so machines that will be built for the demonstration race at Mosport this summer and then sold off afterwards for around $6,000.

Spec series racing lasts only as long as the manufacturer stays interested. That’s usually three or four years. In time, Kawasaki, too, will become distracted and pursue other marketing initiatives. The CSBK’s Colin Fraser has anticipated this and suggests that the burgeoning lightweight sportbike class (Honda CBR300R, KTM RC390, Yamaha R3 et al) could eventually be mixed together to form a horsepower-regulated class that would become a CSBK staple — because a race bike without a class to race in is of no use to anyone.