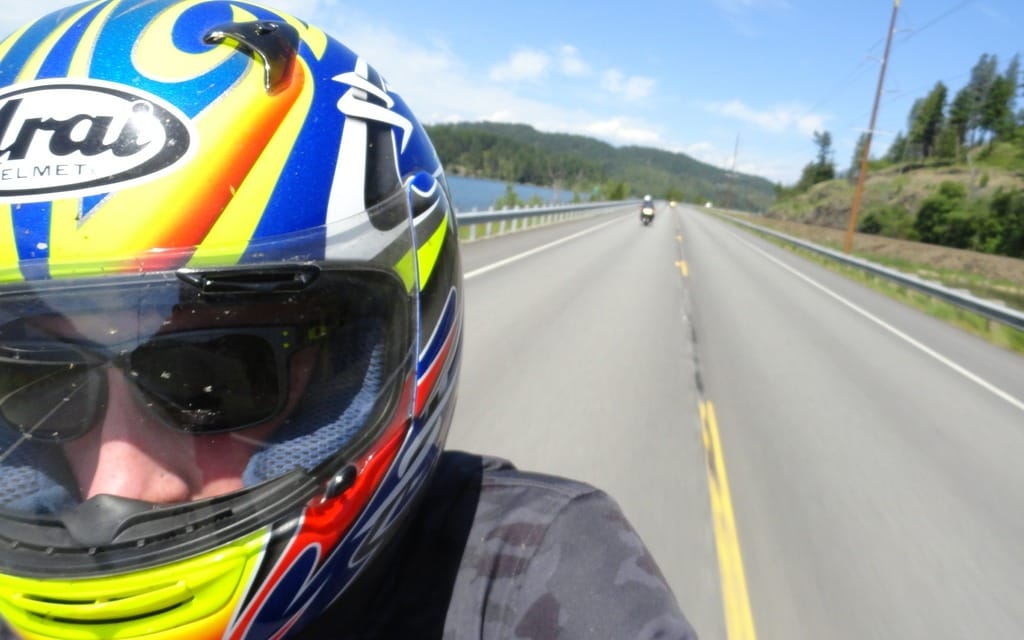 A few years back I shared a story here that could be called the Ballad of Jimmy Bolin, a man who burned brightly in the lives of those he loved when he was with us. He was killed on his bike while returning from Daytona about 10 years ago, though the memory of him still glows.

Jimmy hosted a pig roast (forever immortalized for those who attended as the Pig Roast) at his home in Forks, Washington, the summer before he died. While planning a recent trip with my sons I realized I wanted to commemorate that event. (That wasn’t my intention at first, but that’s how it ended up. Sometimes things work out that way.)

Our route sent us from Alberta into B.C. for the Kootenays, Montana for the Lolo Pass, Oregon to visit friends in Baker City, Portland to explore craft brews, up the Pacific Coast Highway — through Forks, of course — and finally, the back way home through Whistler and Cache Creek. But the route, as always, was only part of the story.

Throughout the trip I’d been talking about when Jimmy and I did this, or pointing out where Jimmy and I did that. Often these comments would cause my youngest son to chuckle, roll his eyes and gently mock me for “going on again.” But in Baker City, he saw it from another side.

The folks we were staying with had also attended the Pig Roast, along with other events involving Jimmy; it wasn’t long before we started in on his oral history. One of the centrepieces of the Pig Roast was an inflatable pig I’d added to the antics. I mentioned that I get asked about it by people who hadn’t even attended. My son was just about to offer a smart remark about my oft-repeated tales when our hosts laughed and weighed in — apparently they get asked about the same thing in their travels. My son paused and the stories continued, some that he’d heard before, some that were new to him, but all about the people, the trips, and the laughs, all the experiences that grew from that one event.

Later that night my sons and I talked about what had happened, how we were guests at a house belonging to people I’d shared something with 10 years ago, how my sons were now part of that experience by extension. They saw it then, that they were being accepted, as I had been many years before, simply by being willing participants in a scene.

When we rolled through Forks a week later we found ourselves with two full days of clear skies. We’d had rain coming up the coast, and we got rained on when we left, but for two days we basked in sunshine, explored the roads and revisited the spots where the stories started. (I have a theory of how we got two days of glorious sunshine in a rain forest, but that will have to wait for another day.) We could have pushed through in a day, but we took our time. We headed out to Cape Flattery and were rewarded with great roads and stunning scenery, went out to Joyce to see some old roads I’d travelled, and took in the views at La Push. We even went by the site of the Pig Roast — not much to see there after all these years, but isn’t that always the way with such stories? The most memorable parts are the ones you can never see.

In the big picture our trip was mostly uneventful — there were no breakdowns and a mild amount of on-road drama from oblivious drivers — but you wouldn’t know that by our satisfied smiles. We’d had an absolute blast.

I had another reason to smile: I’d closed a loop, connected one family to another. It didn’t matter that some were gone and they’d never actually meet; my sons had looked into the eyes of people that had been there, seen for themselves the tears, laughed at the stories. They’d walked the ground, ridden the roads. They had their own stories to tell, and now they had their own part of a bigger picture: the ongoing Ballad of Jimmy Bolin.