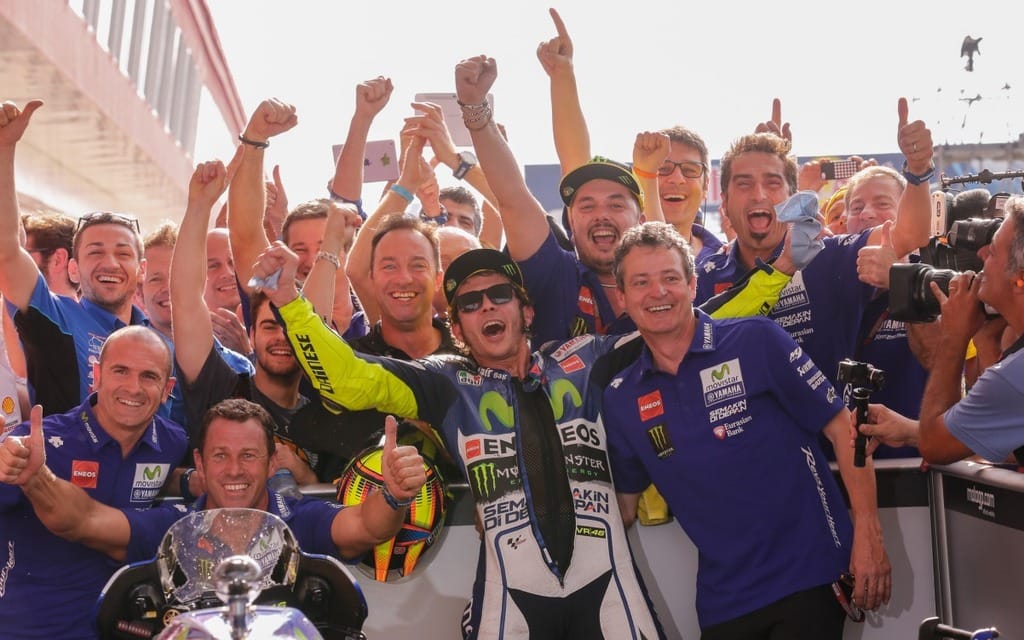 Movistar Yamaha rider Valentino Rossi’s decision to go with the extra-hard tire option paid off with a victory at Argentina’s Termas de Rio Hondo circuit on Sunday. The win is Rossi’s 84th in MotoGP’s top tier.

Marc Marquez (Repsol Honda) started from pole position and pulled a four-second lead early, while Rossi started from eighth and had to pick his way through the pack. The Doctor passed Ducati’s Andrea Dovizioso for second place with 15 laps to go, then steadily ate away at Marquez’s lead. Rossi caught up with two laps remaining. The pair exchanged the lead several times before Marquez got caught up in Rossi’s rear wheel and crashed out of the race. Dovizioso finished second, 5.685 seconds back, while Cal Crutchlow (CWM LCR Honda) pipped Andrea Iannone (Ducati) for third, 8.298 seconds behind. For full results from Argentina, click here.

Rossi, speaking of Marquez, said, “He is a rider who is all or nothing, he touched me in the corner, then he touched me again as I was accelerating, I think he made a mistake and he crashed. It’s a shame because it could have been a great fight on the last lap.”

Rossi remains atop the overall standings with 66 points. Dovizioso’s strong early season form sees him second overall with 60 points, while Iannone is third with 40. No points in Argentina means Marquez drops to fifth.

The next round of MotoGP goes May third at Spain’s Jerez circuit.