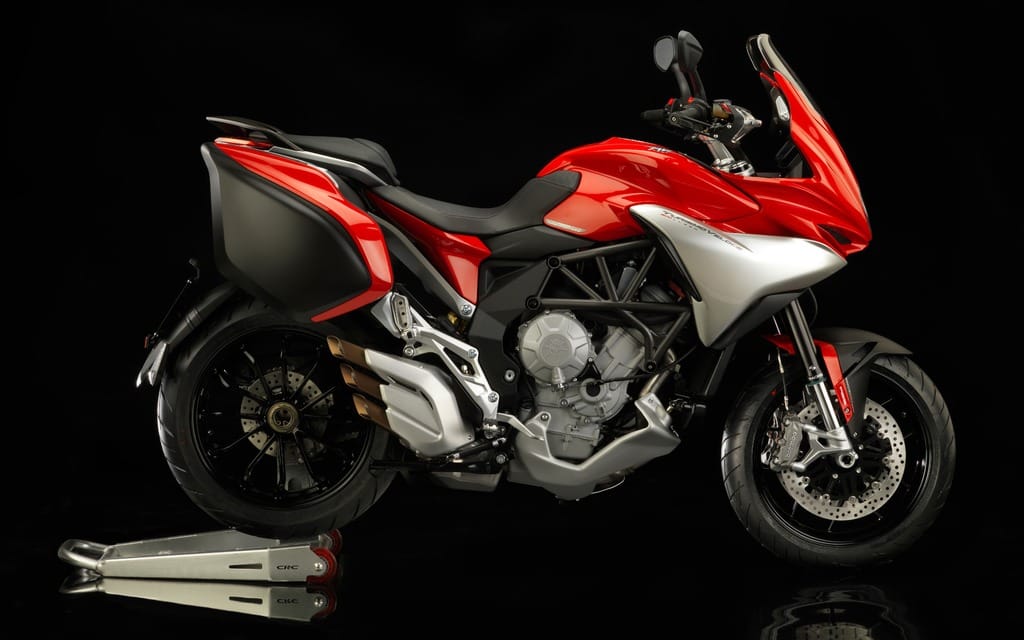 The Stradale 800, with its windscreen and saddlebags, adds versatility to MV Agusta’s lineup. But let’s be honest, the screen is small and the bags are smaller. Serious sport touring requires decent weather protection and sensible luggage capacity.

While no one outside MV has ridden the new bikes, we’re very familiar with the feisty 798 cc triple propelling it (MV has nine models powered by the mill). The engine is now more fuel efficient, says MV, and gearing ratios are “optimized for this specific model.” A quickshifter is standard, as is traction control and ABS. The base Turismo Veloce has a Marzocchi fork and a Sachs shock while the Lusso ups the ante with semi-active, electronically controlled Sachs suspension. It also adds integrated GPS to its five-inch TFT colour display.

A substantial windscreen and sizeable fairing suggest improved weather protection compared to other MVs, and radiator shrouds should help shed wind and water. Front turn signals do double duty as handguards, and the Lusso includes heated grips. Sizeable colour-matched panniers — said to hold 30-litres apiece — are standard on the Lusso (and add-ons for the base bike).

MV unveiled the Turismo Veloce at EICMA in 2013, but production did not follow. At EICMA 2014 it was again on an illuminated dais, and this time, we’re told, it’s on the way. “It’ll be a 2016 model, but could be here by as early as July,” says Tim Massarelli of MV Canada. That’s if you pre-order, mind you, as regular shipments likely won’t start arriving until mid-August or later, and as yet no prices have been set.

Why such a long delay from unveiling to availability? Flooding in November of 2014 at the factory has pushed back production, says Massarelli. Fair enough, but the factory hasn’t been flooded for two years. Whatever the reasons for the Turismo Veloce’s delay, its arrival is welcome.