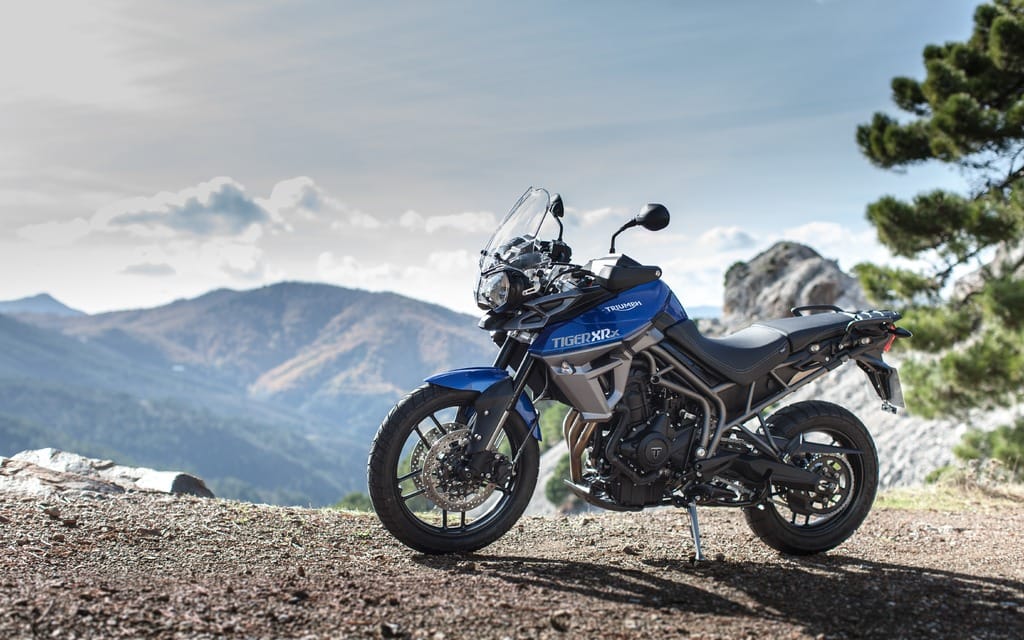 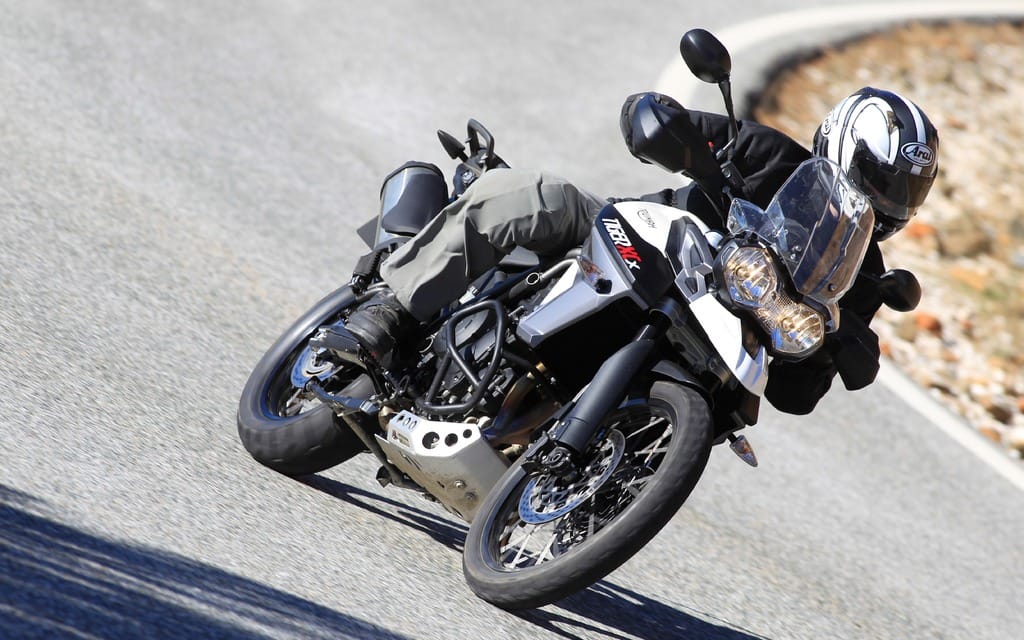 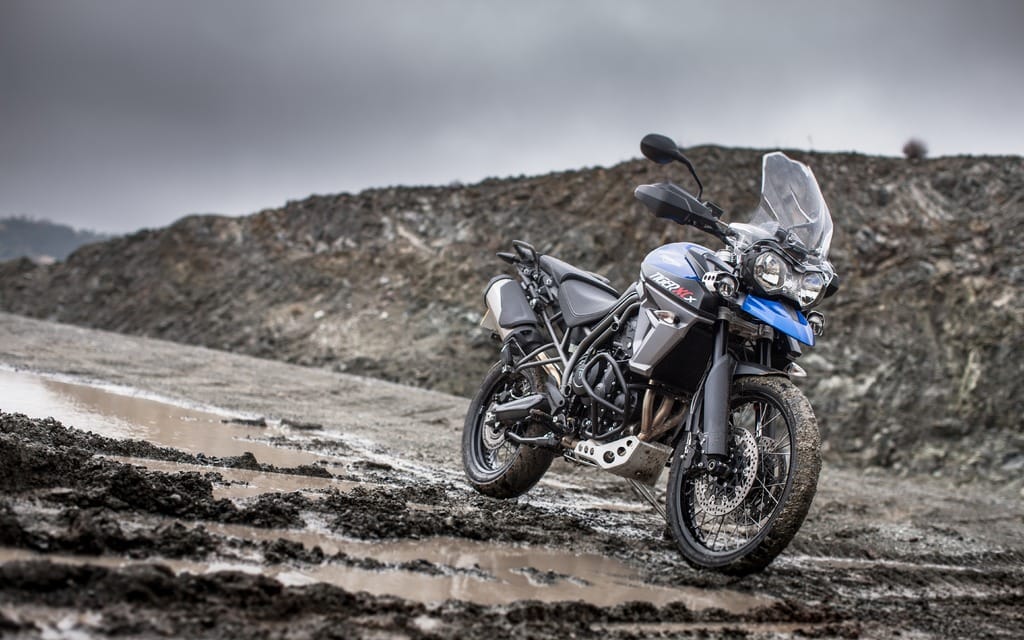 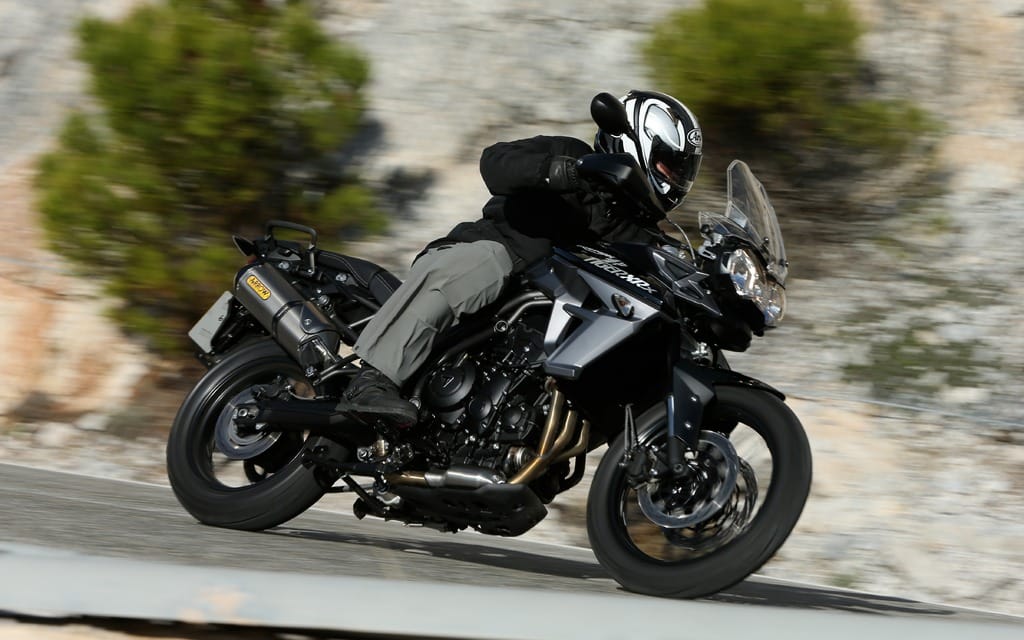 They say you can’t teach an old dog new tricks. (I always wonder who the “they” is in sayings like that. Am I part of “they” now, because I just said it? Are you, because you just read it?) Thankfully for Triumph, Tigers are much easier to train — or, more accurately, to revise and refashion.

The adventure-touring segment, I’m told, and am telling you, is the fastest growing in motorcycling. In such a competitive environment manufacturers either adapt, or see their offspring die slow deaths gathering dust at dealerships. Triumph’s design and engineering departments have been busy with the brand’s cuddly kittens; the revamped Tiger Explorer XC impressed CC editorial staff (both of us) on the 2014 Fall Tour, and the firm is introducing a completely renovated series of middleweight Tigers for 2015.

The new Triumph Tiger 800 range is split in two: the XR, more focused on road riding; and the XC, more inclined toward off-road pursuits. There’s also a kitted out version of each model — Triumph refers to them as “range toppers”—the XRx and XCx, for a grand total of four Tiger 800s to choose from. The new names look a bit like math formulas, but before we solve for X we should probably solve for why — as in, why change the Tiger 800 at all?

Because if you’re not improving, you’re risking stagnation. The old Tiger 800 was a successful model, but true satisfaction (and profit) comes from building on success — taking something good and making it better — and not hoping it holds out for another year.

Of course they overhauled the engine. The new mid-weight Tigers retain the 800 cc DOHC inline three-cylinder format of the old, though Triumph says a host of internal changes reduce mechanical noise and make the mill more efficient. According to David Lopez, chassis development engineer at Triumph, most of that efficiency is gained through the adoption of a ride-by-wire throttle system. Triumph claims fuel consumption is improved by 17 percent — though OEM fuel consumption claims are generally a little optimistic. Also, the six-speed gearbox now incorporates components from the sharp-shifting Daytona 675, which, says Triumph, makes for “lighter and more precise gear change action.”

The suspension system has also been upgraded — on both XC models, at least. While older models had suspension components from Showa, the off-road oriented XC and XCx now receive a 43 mm WP fork (adjustable for compression and rebound) and remote-oil-reservoir WP monoshock (adjustable for preload and rebound), though wheel travel is unchanged at 220 and 215 mm front and rear, respectively. The switch isn’t, says Lopez, because Showa suspenders aren’t good enough, but because Triumph’s expectations have changed. “Our standards for off-road performance [of the XC and XCx] are higher,” he says.

The Tiger 800s also get a facelift, with new radiator shrouds and tank side panels, which look more taut, muscular, and are more stylistically similar to the bigger Tiger Explorer. It’s not just for show, though; Triumph says the new bodywork does a better job of channeling hot air from the engine away from the rider’s legs. The windscreen is also redesigned, and changes in rider triangle geometry are said to reduce weight on the wrists and increase legroom (two issues that I didn’t think were issues on the old Tiger 800, though more of a good thing is still a good thing).

That’s the difference between old and new, but what about new and new? The road-focused XR has a 19-inch front cast wheel; the XC a 21-inch spoked front rim. As mentioned earlier, the XC has WP suspension, while the XR retains Showa units — a 43 mm fork and preload-adjustable monoshock — with less travel (although they still allow a healthy amount of movement, 180 and 170 mm front and rear, respectively). The seats of both bikes are two-position adjustable, though their heights differ: the XR’s an accommodating 810/830 mm; the XC’s a roomier 840/860 mm. Wet weights also differ slightly, 213 kg for the XR, 218 kg for the XC. They share a 19-litre tank, both come with two riding modes (on and off-road), disengageable traction control and ABS, and both are available in black or white.

At the Tiger 800 press launch in southern Spain, Triumph puts its best tread forward. No base model testers for moto-journalists of the world, we’re riding the higher-spec XRx and XCx. What do they add to the base package? Aside from another 3 kg, both receive an additional user-programmable riding mode, as well as four selectable throttle maps (rain, road, sport, and off-road). ABS and TC come with a third off-road setting, and cruise control and self-cancelling signals are standard. They also receive handguards and a centrestand. To increase on-road comfort the XRx has an adjustable windscreen, and what Triumph refers to as rider and passenger “comfort” seats. For improved off-road protection the XCx gains an aluminum sump guard and engine protection bars. In addition to the base colours, both up-spec bikes are available in blue.

I know, that’s a lot of information to plough through — which is exactly what I’m thinking as I fend off fatigue during Triumph’s technical presentation. Imagine my relief, then, to actually be riding a motorcycle the following day. My first ride is on the XCx, the itinerary promising an abbreviated off-road section followed by a longer on-road ride. Mounting up, the bike feels roomy; the clutch pull is light, shifting sharp, fuelling very good, and throttle response smooth and immediate on the short stint to the quarry that serves as our off-road playground.

I switch to off-road mode — which allows a sane amount of slip and rear wheel spin — and spend the next 20 minutes skating the XCx around a short loop. It’s good fun, and with its comparatively light weight and linear throttle, the XCx is confidence inspiring in the dirt. Photo passes complete, we take a tighter and hillier public trail up to a lookout spot. (One woman walking her dog is definitely not happy to see eight motorcycles coming toward her.) While, admittedly, we don’t spend much time off-road, the XCx is competent in the dirt and would be doubly so with knobbies — and its suspension setup is more than adequate for the off-roading most owners will get into.

After the off-road tease, the XCx provides a display of its on-road ease. Riding to Ronda on the A-397, the bike’s torque-laden, 94-hp triple impresses with its tractability. Switching to the sport throttle map sharpens acceleration, though the bike remains solidly planted while screaming out of third-gear corners. It’s still early, and once we reach higher altitudes (we hit 4,000 feet on the day) I notice condensation in shady corners (and on shady characters). I switch to the Rain throttle map using the Tiger’s info/toggle switch setup on the left switchblock, which smooths throttle response without making it too tame. While its performance won’t blow your stripes off, the XCx delivers a sporty ride.

The sight of a dozen vultures circling overheard is a sobering reminder to stay alert (stray over the cliff and you’ll become carrion). Sizable rotors — twin 308 mm front, 225 mm rear — and Nissin calipers help maintain control. Granted, they’re not of the highest spec, but braking performance is good and doesn’t fade. I feel some mild front-end dive under heavy braking, but after firming up the fork the XCx becomes extremely composed while stopping.

While the XCx has excellent road manners, the following day’s ride on the XRx is an example of Tiger 800 road riding refined. The route is all on-road, a 200 km loop that includes the same segment of the A-397 up to Ronda, though I’m not complaining; it’s a brilliant piece of well-kept, snaky pavement, and riding the same road allows direct comparison of the twin Tigers. Brakes and engine parameters are identical, so the difference in their performance is negligible.

That the XRx is more compact is immediately apparent, and not just because of its lower seat height and lesser ground clearance. Its handlebar is narrower (829 mm, vs. 851 for the XCx), and its wheelbase shorter (1,530 mm, vs. 1,545 for the XCx). Also, rake and trail are tighter (23.9o/92.4 mm, vs. 24.3o/95.3 mm). But enough with numbers — how does it feel? The seating position is slightly tighter, yet still very comfortable. But more importantly, the XRx is more responsive, its handling sharper, and turn-in from the smaller 19-inch front wheel quicker and easier. The Showa fork and shock soak up bumps and hold the road as they should. Covering the same stretch of road as the day before, the difference in the ride isn’t huge, but on-road the XRx is noticeably better than its brother.

I also notice a different exhaust note — not below 5,000 rpm, where the new Tiger 800 whirrs less than the old but still sounds like a cicada, but at full howl, where the XRx seems angrier than the XCx. The culprit is an accessory ($854.97) Arrow slip-on exhaust (odd how Arrow exhausts are always sneaking onto Triumphs we test) without which the bikes sound the same. Putting the XRx’s adjustable windscreen in its highest position keeps windblast off my chest and causes no buffeting and a minimal amount of wind noise. And while the XRx’s comfort seat is more comfortable, the difference from the XCx’s standard perch isn’t drastic.

Though the Tiger 800 line can’t compete with other middleweight triples in terms of outright performance — the Yamaha FZ-09 for example, or any one of MV’s endless string of triple-based bikes — Triumph edges the competition for comfort and everyday usability. The Tiger 800 may be more docile, but it’s got more than enough power for most people. But with four models, which pussy do you pick? The base XR is $12,599, the base XC $13,699. Up-spec little-x versions of each are $1,200 more, which seems like a bargain considering the added features. How do you choose among the herd?

The final stretch of the XRx test ride seals my decision. The road streams south from the Sierra de las Nieves like a waterslide, winding its way through fields awash in reds and pinks and mauves. Second-gear corners come in such swift succession and the XRx is so dialed in that I enter into a trance-like state, turns blending together to become a continuous, sinuous dance towards the shore. This, and not the dust and the dirt, is what speaks to me. But you’re not me. Thankfully, Triumph’s Tiger 800 line offers plenty of options.