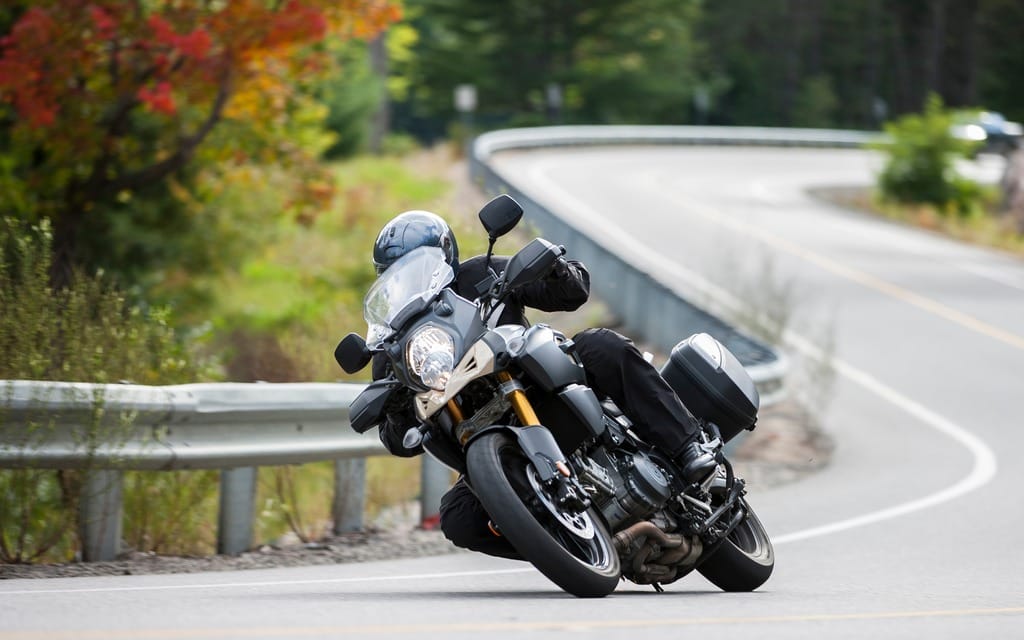 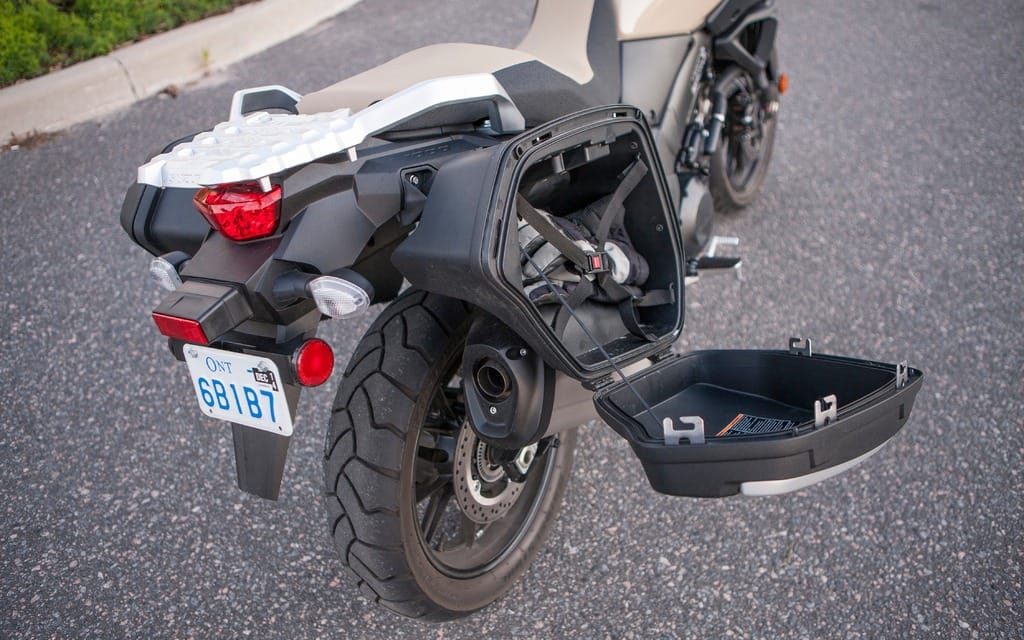 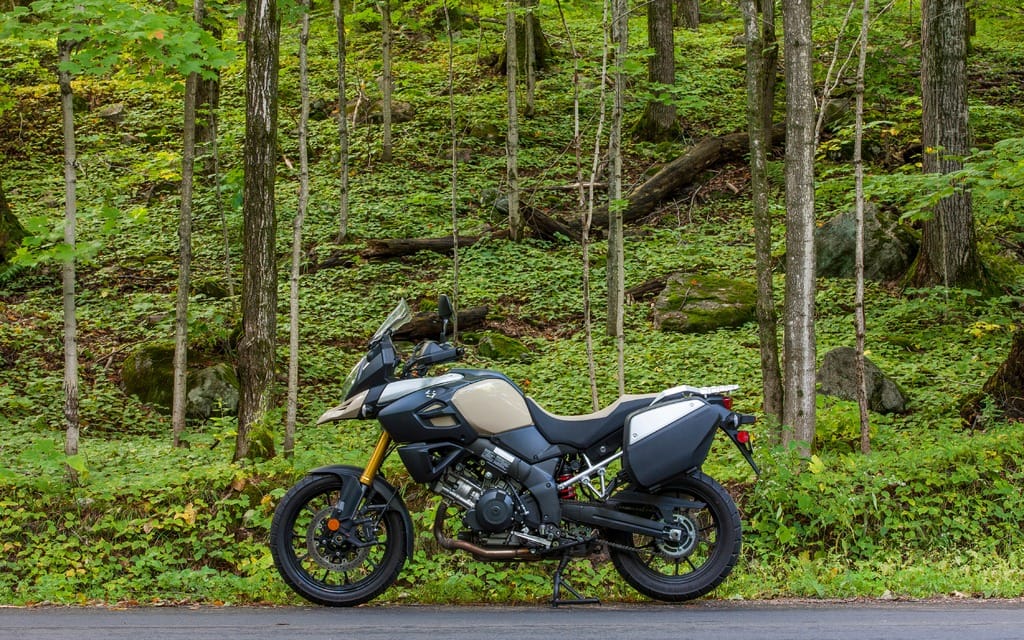 Chapter One: The Invisible Machine

I’m too discrete to name names, but I have a friend whose initials are Colin Fraser. You probably know him, too, he runs the Mopar Canadian Superbike Series. Colin owns a V-Strom 1000. It’s an older model, and it’s yellow. Very yellow. Colin also has a minivan, a Chrysler minivan, and he has accessory floor mats so effectively designed that you could gut a horse overtop the stow-n-go seats and not spill a drop of blood on the carpet. Colin is a practical man, and I worry that the V-Strom 1000 is too frivolous for him.

First of all, the looks of the thing. Someone paid attention to the looks of the thing. Whereas Colin’s decade-old V-Strom has body panels that bulge grotesquely like a morbidly obese inner thigh, the new bike is taut, trim, and slightly self-conscious. Look at its colour. When it came to spraying the old bike someone in production got on the ringer and requested a gallon or two of red or yellow. But this V-Strom is bathed in a coat of what they call Desert Khaki. Except it’s a little too pastel, which gives the impression that it’s too-thickly-laid foundation on the cheeks of a 60-something woman seen driving a convertible on the streets of Palm Springs, California.

And those saddlebags, too, are barely sufficient in their capacity to house the liquids and gels of the woman in that convertible. You can’t get a full-face helmet in the larger of the two, and the right side bag (with a generous cut-out to clear the muffler) is smaller still. The SE variant tested ($13,499) includes the bags, a centrestand, and hand guards. If you’re a light packer — you don’t travel with a hair dryer, for instance — the SE model is the way to go, as the premium over the base V-Strom 1000 ($12,399) is just $1,100. (The bags, on their own, with mounting hardware, are $1,530.85.) A way to increase useful capacity by 35 L is by adding Suzuki’s accessory top case ($1,086.05 with mounting hardware). Were I a prospective customer, I’d buy the bike without bags, then source a pair of rugged voluminous capacity top-load aluminum panniers from the aftermarket. (Oddly, Suzuki’s V-Strom 650X ABS EXP model is fitted as stock with a pair of BMW-GS-lookalike metal bags, but none are listed as an option for the V-Strom 1000.)

If the V-Strom’s visage and luggage hint at concessions to style, the riding experience is classic usefulness-first practicality. As Michael Uhlarik has noted in the past, the V-Strom’s 90-degree 1,037 cc V-twin was created for use in the TL-1000 sport bike, which was Suzuki’s version of Ducati’s all conquering 90-degree V-twin. As the owner of a pair of cold-blooded, high-strung, tempestuous 1990s Ducati superbikes, the idea that the ultra-refined V-Strom’s engine originated merely as competition for Ducati is a head-scratcher. I sure wish my 916 fuelled like a V-Strom.

The drawback to a 90-degree V-twin (or V-four) is the difficulty in packaging such a long engine into a modern, compact chassis. The advantages, however, are significant, first among them perfect primary balance, which negates the requirement for a counterbalancer. As James Nixon and I thrum down the highway, the V-Strom purrs with civility at (should the mood strike) ultra-illegal speeds. And the riding position is rational and more comfortable, even, than the BMW K1600GTL that accompanies us on our journey. If the bend in your leg makes your knees hurt after an hour in the saddle of the V-Strom, book an appointment with a surgeon to have your knees replaced.

Part of the V-Strom’s cult appeal is that it’s a simple motorcycle for riders who believe that the fax machine’s death was premature. (I’m one of them.) This new variant, however, dips into Satan’s mixed bag of goodies and withdraws traction control. Suzuki — cleverly — kept it simple. How simple? Two positions on and one position off. Position one has less intrusion than position two, but I can’t confirm this because when I ride a V-Strom I never pay attention to the machine. Because a V-Strom requires so little from me, I’m unable to muster the gumption to pay attention to it. It’s the motorcycle equivalent of driving a Toyota Camry or a Honda Civic. The controls are intuitively placed, the power is sufficient and easily controlled, and the handing is neutral and benign. You say there’s traction control? OK, I believe you. All I care about is the next bathroom stop and whether the café in the little town up the road still serves decent espresso. And that is the genius of the V-Strom.

I have never owned a motorcycle like a V-Strom. My motorcycles have had shoddy electrics, weak charging systems, clattery clutches, and uneven fuelling. For better or for worse (usually the latter) I require a motorcycle that requires something back from me. I wrote once that the V-Strom is the motorcycle that you forget all about — while you’re actually riding it. And there is no one more qualified than me to understand the merits of this approach to motorcycling. Instead of fidgeting on an uncomfortable seat or thinking about the quality of the pavement (or worrying if there’s pavement at all) a V-Strom rider is free to go. Just go. And tell me, what’s wrong with that?

Chapter Two: I Am That Man (Confessions of a V-Strom Owner)

Editor Graham, smitten as he is with elderly Ducatis, has never understood my affection for V-Stroms. Over the years he’s made smirking comments about my DL650’s looks, its modest power, its basic suspension and — blasphemy! — the fact that it requires virtually no maintenance. I’ve come to realize that we look for completely different qualities in our two-wheeled companions. Neil wants a thoroughbred while I want a Labrador: a bike that’s cheerful, relaxed, and utterly dependable, but with enough athleticism to get me swiftly down the road.

Suzuki’s second-generation DL650 is an evolution of the much-loved V-Strom platform. But the new 1000 is a very different animal, with a revamped power plant, much-improved suspension and traction control. The bike’s lines are now lean and sharp, with a raptor’s beak in place of the old pug nose. The faithful lump of a bike has become a thoroughly modern motorcycle, inside and out. But is that a good thing?

Curious, I begged off work one warm September morning, and rode the V-Strom up the 400 toward Port Carling in Muskoka. On the highway, the V-Strom immediately impressed with its comfort and stability. It’s equipped with one of the best stock saddles I’ve experienced: broad, supportive and firmly padded. Wind buffeting is far less problematic than with previous models. The windscreen features a brilliantly simple mechanism that allows you to adjust its lean angle on the fly. Just push the screen forward again and again and it will click through progressively steeper settings.

Although its main competitor, the BMW R1200GS, has the edge on power, I found I preferred the V-Strom’s engine for highway miles. It’s responsive, but also smooth and relaxed, spinning a velvety 4,700 rpm in sixth gear at 130 km/h. The motor coarsens above 6,000 rpm, but you’ll find more torque than you could ever need in the bottom half of the rev range.

Later that day, I turned south at Gooderham onto bendy Highway 507. The lowering sun shone through the trees in staccato bursts, creating an odd, slow-motion effect, like dancing in a nightclub under strobe lights. The V-Strom responded well to a more aggressive pace, turning in quickly and holding lines well, the suspension easily soaking up the road’s bumps and frost heaves. But the overly sensitive front brakes were problematic. Hard braking before a corner would send the V-Strom’s beak diving toward the pavement like a toy drinking bird, upsetting the bike’s suspension and my composure. I found it easier to modulate the brakes with one finger on the lever, but it remained an annoying flaw in the Strom’s road manners.

I rode for as long as the light held out. In the end, I clocked more than 600 km, every one of them a pleasure. The V-Strom proved to be well balanced and comfortable, with a wonderfully burly motor that inspires fast, confident riding. But I can’t help but feel that it’s a bike in search of an identity. It’s billed as an adventure tourer, but its flashy bodywork, road-oriented tires and need for premium gas put it more in line with adventure sports like the Ducati Multistrada, or, on the low end, the Honda CB500X.

It’s a competitive category with increasingly blurred lines. If it’s not careful, Suzuki may find itself flogging a motorcycle that is neither the fastest, nor the most technologically advanced, nor the cheapest among its competitors. And that’s a tricky place to be in a dog-eat-dog motorcycle market.

On a fine fall day I ride the a Suzuki V-Strom 1000 to the bewitching abode of Barry Brown (Neil Graham has described the property in detail in a previous editorial). The leaves are vibrant, the air a perfect mix of dreamily warm in the sun, deliciously cool in the shade, and the roads smooth and undulating. Altogether, it makes for an unforgettable day on an utterly forgettable bike.

Don’t get me wrong; the Strom is a fine motorcycle. Its 90-degree V-twin is engaging when ridden in earnest — twist the throttle to the stop and the bike responds with a deep thrum and a steady, stalwart surge of power. Short-shift and the feel becomes infinitely more refined (and oh-so Japanese). Clutch pull is moderate and fuelling well sorted, making the bike as pleasant to ride in the city as it is on the open road.

Its suspension is suitably sprung (and fine-tunable) and a wide (but not too wide) handlebar makes handling light and comfortable. Braking performance is strong and sure — though I find the initial bite of the Tokico four-piston monobloc front brake calipers abrupt. ABS is standard and functions flawlessly. And — a first for the V-Strom — traction control is standard and modulates power smoothly.

The V-Strom is tall but not top-heavy, which enhances its maneuverability. The seat is firm but comfortable, and the upright and roomy adventure-touring riding position is unmatched for all-day comfort. A nine-way adjustable windscreen (movable on the fly between three angles) provides decent wind protection while causing minimal buffeting to my six-foot-two frame. Instruments are clean and legible, controls simple and intuitive.

When you ride the V-Strom 1000 it comes across as a spec sheet made manifest, a collection of facts and figures given two-wheel form. It’s cool, clinical, and completely competent. And that’s OK. Because what a motorcycle is isn’t necessarily what makes it desirable — sometimes it’s more about what you do with it. The Strom may lack soul, but it makes up for that in its facilitation of soulful experiences. And — let’s face it — experiences cost money. Which brings us to the most appealing aspect of the V-Strom 1000 ABS SE: its shockingly low price. For $13,499 you’re getting a sharp, sophisticated, well-appointed motorcycle. That’s almost $6,000 less than the base 2014 BMW R1200GS. Think of all the places you could go with six grand in your pocket.