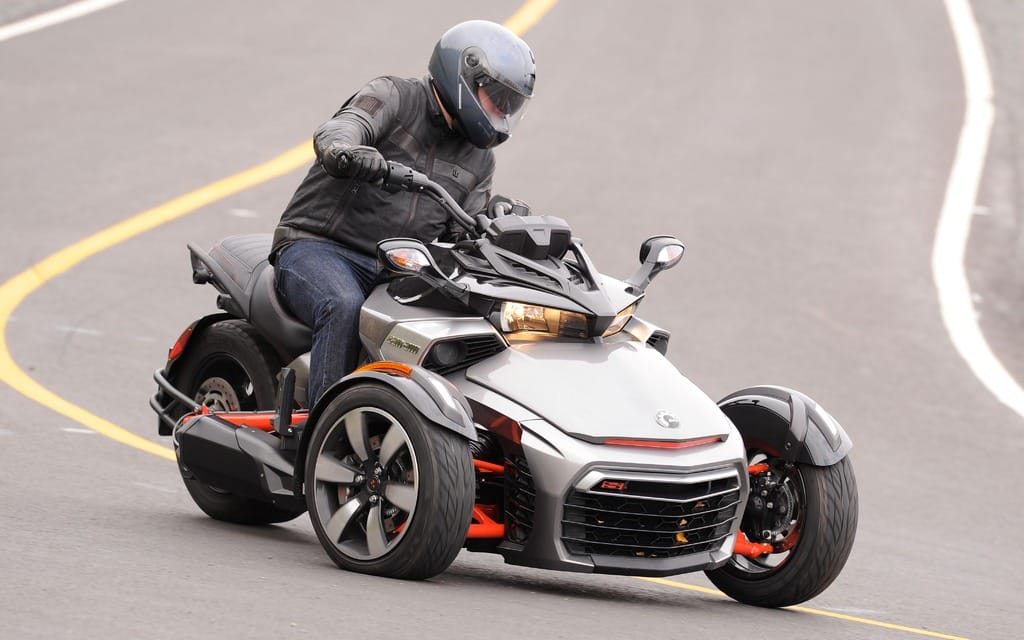 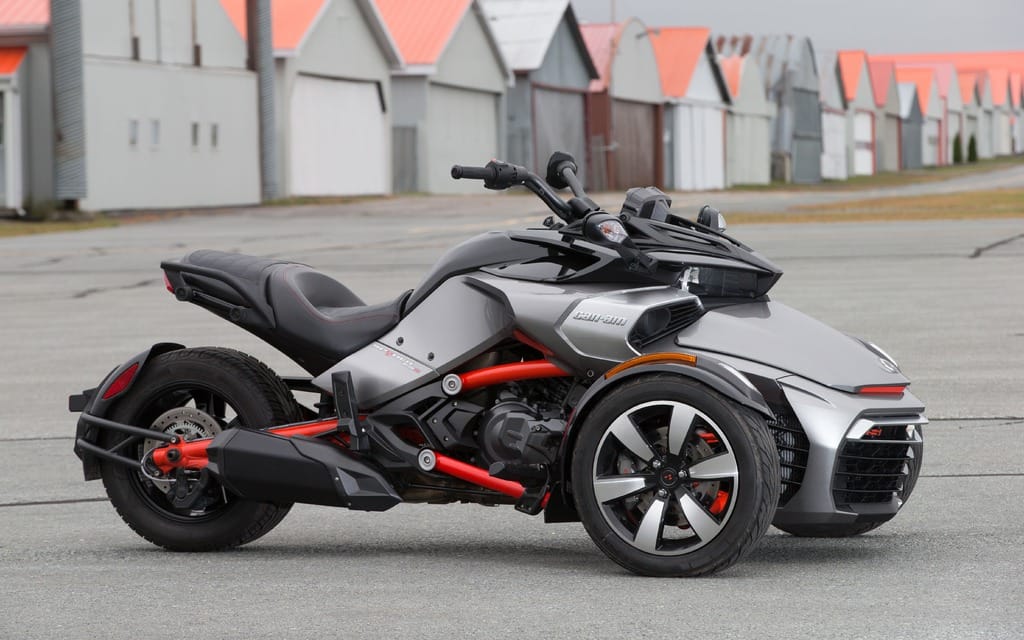 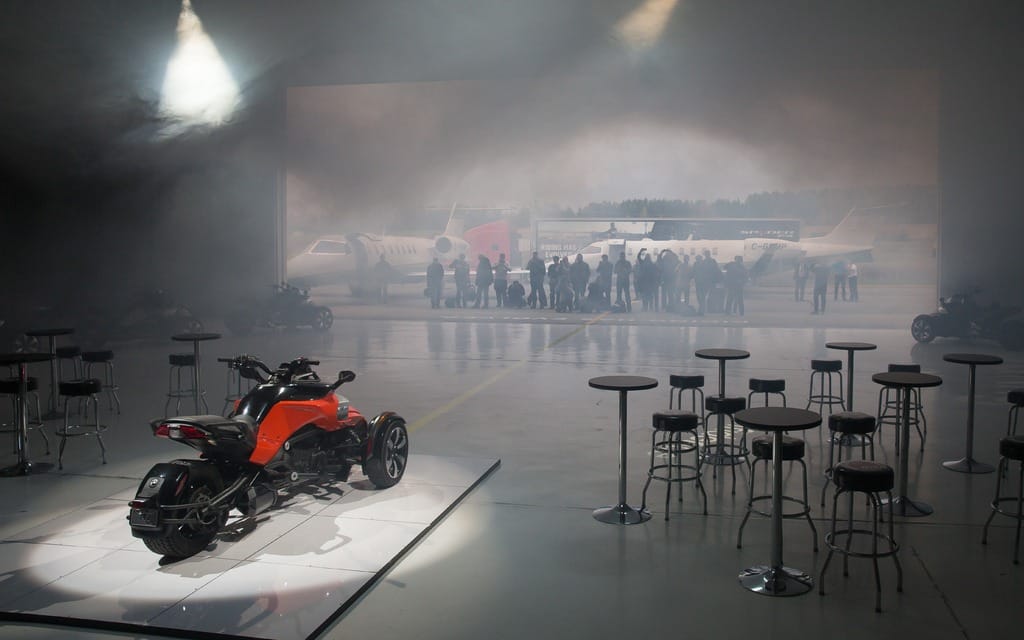 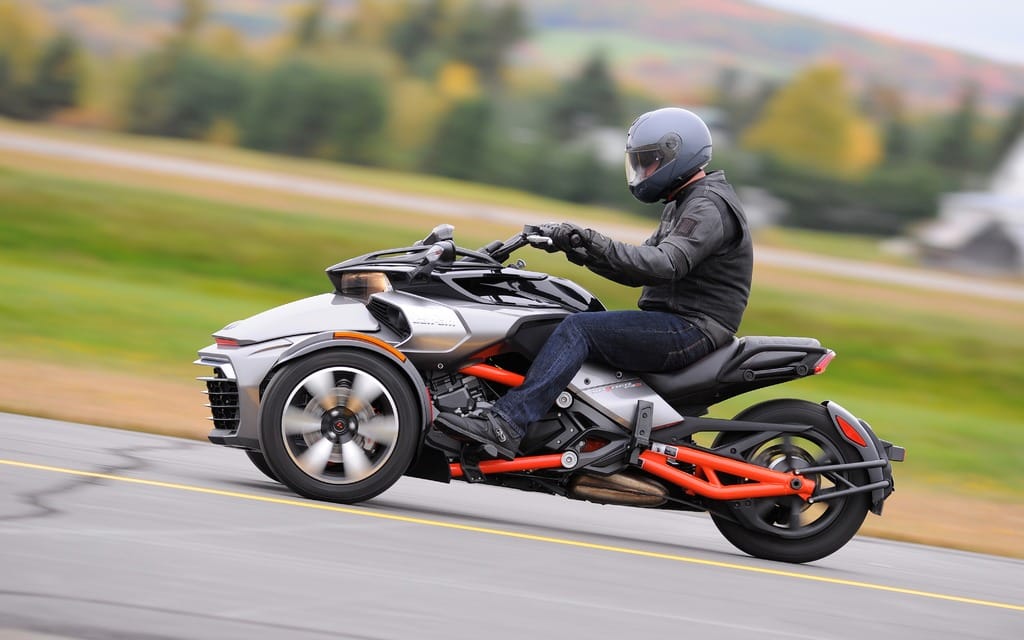 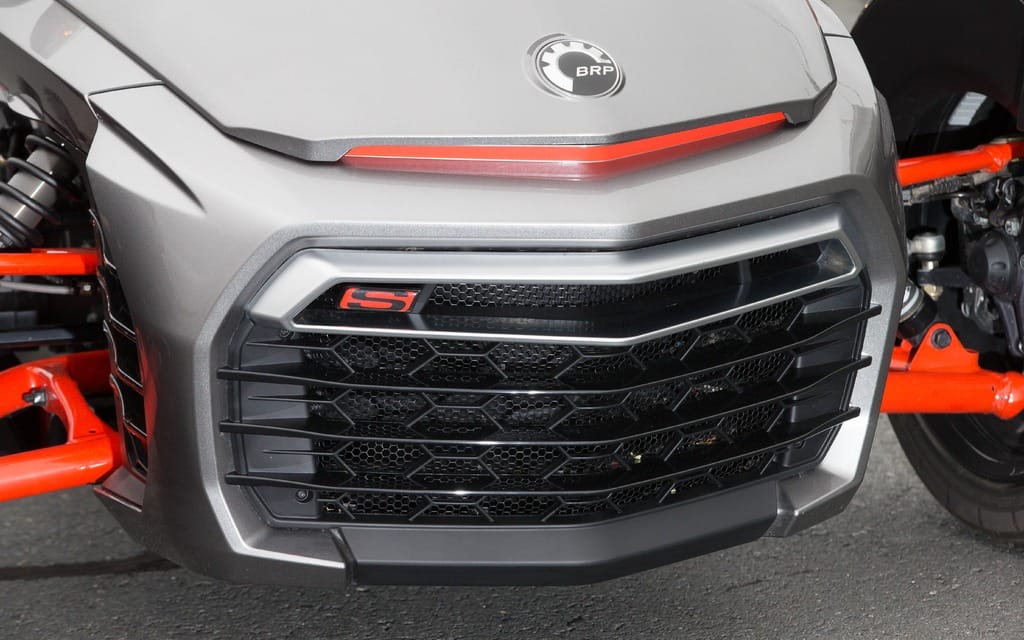 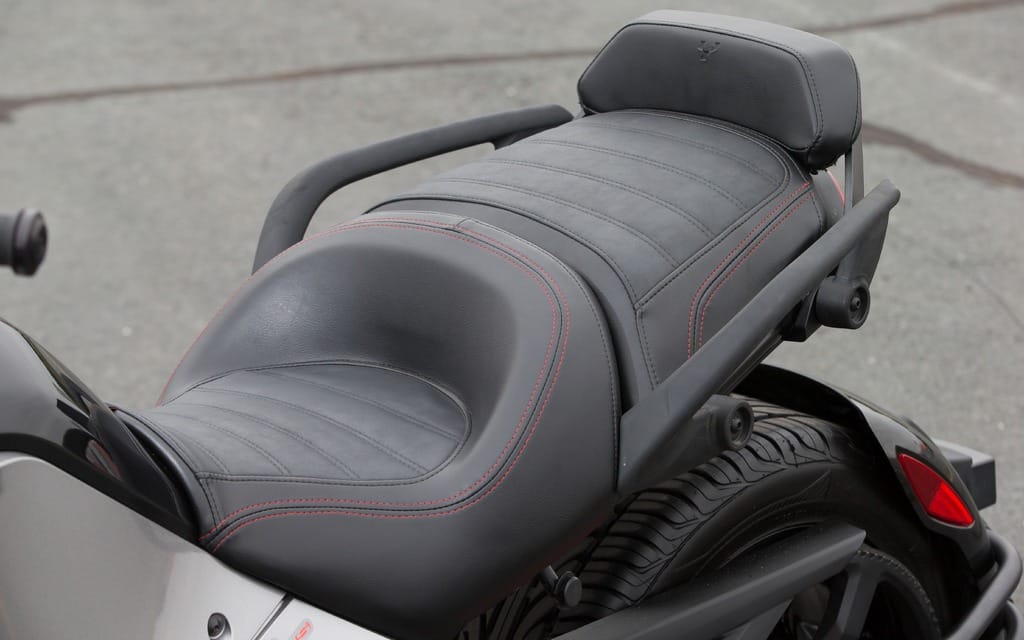 We know what the Spyder isn’t – a motorcycle – but what is it? The F3 is for a more enthusiastic enthusiast

I’m aware that it’s the press launch of the Can-Am Spyder F3, but it feels more like an episode of “The Amazing Race.” After a short flight from Toronto and a few hours’ sleep, I board a bus outside a Montreal hotel. The itinerary is deliberately vague, and asking for details only elicits an evasive smile from PR staff. Later, I arrive at a small, private airport. Scanning the tarmac, the only vehicles I see that are remotely reminiscent of three-wheelers are the Learjets lined up by the runway. Where are the Spyders? Just a brief flight away, I’m told. Taking a sleek eight-seat business jet for a short flight en route to a jaunt on a Spyder smacks of rock-star-level extravagance.

After touching down somewhere in the Eastern Townships, hacks are herded to the closed doors of a hangar. The buzz of conversation calms once the sound of a robust engine begins blaring from speakers within. Cameras are readied. The doors slowly open, though at first what’s inside is indistinct. Then, once the smoke-machine fog dissipates and the swirling lasers stop dazzling my eyes, I see the Spyder F3, front and centre on an illuminated dais.

More accurately, I see the up-spec version of the base F3, the F3-S. Even more striking than the exuberant, over-the-top introduction — which has a flamboyantly French-Canadian flavour — is how dramatically different the F3 is from the other Spyders. It’s so different, in fact, that BRP has created an entirely new “sport cruising” category to house it. It looks less like a snowmobile and more like a mix of motorcycle and muscle car. The front fairing is smaller than on other Spyders, due in part to a reduction of front-end overhang and the 90-degree rotation of its twin radiators. This exposes more of the double A-arm front suspension system, complete with anti-roll bar and dual shocks (a swingarm and single shock suspend the rear). Less plastic also offers a glimpse of the F3’s tubular steel frame and parts of its 1,330 cc Rotax triple. However, a smaller front fairing means less capacity in its lockable watertight storage compartment (24.4 litres, compared to 44 litres on the Spyder ST).

Initially, I’m skeptical of the word “sport” in “sport cruising” — especially considering the F3’s bulk. It weighs in at an elephantine 386 kg, and that’s without a drop of fuel in its 27-litre tank. But there’s no danger of a tipover in the parking lot (because of that third wheel) and both six-speed transmission options (manual and semi-automatic) come equipped with reverse, which helps make the F3 less intimidating to maneuver at slow speeds than many comparably sized cruisers. And, to put things into perspective within the Spyder lineup, the F3 is actually six kg lighter than its ST counterpart, in addition to having 15 more horsepower (a claimed 115) and 16 more lb-ft of torque (a claimed 96).

As for “cruising,” I’m convinced almost as soon as I swing a leg over the low saddle — or stand on a footpeg and step across (I’m still not sure how to mount a Spyder). Settling into the deeply dished, comfortably cushioned seat, placing my feet on the forward-mounted footpegs and taking the wide handlebar in hand, it’s clear the F3 has impeccably replicated the cruiser seating position. And with the slick new UFit system, the fit is customizable. UFit offers five different footpeg positions, which can be quickly changed by a dealer at minimal cost (staffers say the linkages run about $30 and the swap takes 10 minutes), as well as a variety of handlebars with varying degrees of length and rise. My F3-S has its pegs in position five, the farthest forward, and the fit is roomy and comfortable. The stock handlebar, however, feels a little too high and close. But the beauty of UFit is that riders of wildly varied body proportions — or ergonomic preferences — can fine-tune an F3 to suit them.

The string of subtlety continues when I see BRP has repurposed a runway as a drag strip for our first ride on the F3-S. It’s my first-ever ride on any Spyder, and what better way to feel out an unfamiliar three-wheeler than going from dead stop to full bore and then clobbering the brakes? Clutch pull on the manual is noticeably stiff as I sit at the line. I’m eager to dump it. The squat 15-inch rear tire squeals when I grab a fistful of throttle. I smile as I take off down the tarmac.

The F3, as with all Spyders, comes equipped with stability control and traction control systems (SCS, TCS), which allow ample straight-line rear wheel spin, but intervene once tilt and yaw is detected. Upshifts are sharp and solid, the Rotax is torquey and robust, and the angular exhaust emits a throaty growl as the F3-S surges toward the braking zone. One run is enough to pique my interest in this Spyder’s sporting potential; I’m already considering the possibilities as I reach for the brake.

Except there is no brake — not where I’m used to it, anyway. My right fingers grasp the air and my eyes widen as I recall that the vehicle’s hydraulic three-wheel braking system (with standard ABS) is foot-operated. I press my right boot firmly on the pedal and feel powerful Brembo calipers bite into three 270 mm discs. The F3-S feels a bit squirrelly under hard braking (like a kid in a candy aisle taking alternating half steps between the lollipops on the left and the Rolos on the right). But the seating position allows the rider to brace through the legs, leaving a light grip on the bar for minor corrective steering measures. Considering the machine’s mass, stopping performance is impressive.

The feet-forward seating position is also ideal for hustling the F3 through corners. Shifting my weight to the inside while bracing my outside foot and pushing on the outside grip brings it through bends at a pace that could outmatch many cruisers. (But don’t get caught counter steering, as this will send you in the opposite direction of where you want to go.) And on a tight hairpin, just at the point you feel you’d start tipping, SCS modulates power smoothly to keep things under control without cutting all the fun. Give the F3 some gas on exit and you’ll hear chirps from the rear tire — even feel it step out at times, but it’s never alarming.

Some journalists complained of SCS and TCS being too invasive, and bemoaned the lack of selectable levels of intervention or the ability to turn the systems off. While it may seem like BRP is being a buzzkill by not offering these options, keep in mind the inherent instability of the three-wheel format. Without electronic aids, riding these vehicles at speed on tight, technical roads would require tremendous skill. As well, the loss of stability and traction are more exponential than linear — without electronic aids the risk would be far too great.

The left thumb is used to upshift on the semi-automatic version, with the option of either downshifting using the left index finger or allowing the F3 to downshift automatically. Upshifts are brisk and sharp, allowing for full exploitation of the torquey triple. When downshifting manually, even with the throttle completely closed, I find the semi-auto system overruns the engine more than I’d like. The transitions smooth when the F3 downshifts automatically.

On the F3-S, cruise control is engaged using a switch on the right switchblock, while the left houses the turn signal, high beam, horn, parking brake, and reverse button. It’s also home to the thumb pad used for navigating the wealth of information on the clear, centrally located LCD gauge, which is flanked by analogue speedo and tach. Instrumentation is tidy and low, allowing a clear view of the road ahead.

And in Québec’s Eastern Townships those roads are scenic, but can be pockmarked, frost-heaved and potholed (they’re Canadian roads, after all). The F3’s suspension keeps things comfortable while cruising the long straights and sweepers, soaking up bumps in a manner that reminds me of my mother’s Mustang convertible (some flex felt through the chassis, depending on which wheel passes over the imperfection). Though it still has character, the engine spins along smoothly at highway speeds — with the exception of a slight rough spot around 4,000 rpm that has me thinking I’ve strayed onto a rumble strip. It’s easy to eat up miles on this machine, and after a full day in the saddle all I feel is some mild discomfort in my lower back.

The F3 ($21,799) comes in either black or white, while the F3-S ($23,299) is available in black, black and red, magnesium and black, or white and black (the last two combinations feature red frames). Springing for the S gets you cruise control, machined front wheels, LED running lights, a suede seat with red stitching and other “signature elements.” Appropriately, for a courtier of the cruiser crowd, the F3 comes to market with a long list of OEM accessories already available (windshields, saddlebags, backrests, spoilers, seat cowls, Akrapovic silencers — the list goes on).

We all know the Can-Am Spyder F3 is not a motorcycle. BRP knows this too, and makes no attempt to hide the fact from prospective purchasers (the first item would-be riders initial at the top of any Spyder test ride waiver reads: “I acknowledge that this is not a motorcycle”). And for a large chunk of the Spyder customer base, its reminiscence (or lack thereof) to a motorcycle is meaningless; BRP says 25 percent of current owners had zero motorcycle experience prior to purchase. For the rest of us, whether we like it or not, the Spyder has created its own niche in the powersports portfolio. And that niche is expanding.

“We are happy with our growth so far,” says José Boisjoli, president and CEO of BRP, “but we are also frustrated.” Pockets of popularity are why he’s perturbed. As an example, he discusses two dealers in Florida, both in locations with similar demographics. One sells 100 Spyders a year, the other only three. While it’s difficult to influence the diligence with which a dealer will flog your offerings, it’s easy to influence the offerings. Enter the F3.

Before the F3, the Spyder lineup’s models were undeniably similar (cloaked in plastic, riders perched on top). And if a quarter of BRP’s Spyder customers have no two-wheel experience, then 75 percent have at least some. How many prospective buyers familiar with motorcycles have shied away because a Spyder seemed too alien?

The F3 is a refreshing departure from the Spyder norm. It’s the most motorcycle-like machine BRP makes, and the class of motorcycle it most resembles — the cruiser — happens to be the largest segment in North America (what a happy coincidence). The F3 is long, low, smooth and comfortable. It’s an engaging, evocative vehicle that is thus far BRP’s best chance of enticing motorcycle enthusiasts away from two wheels.