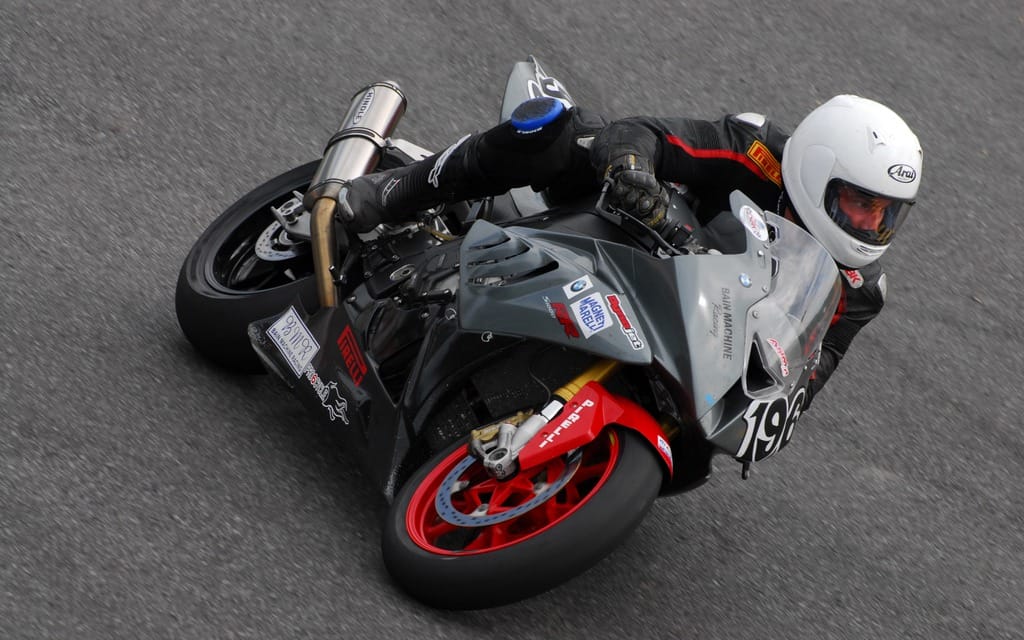 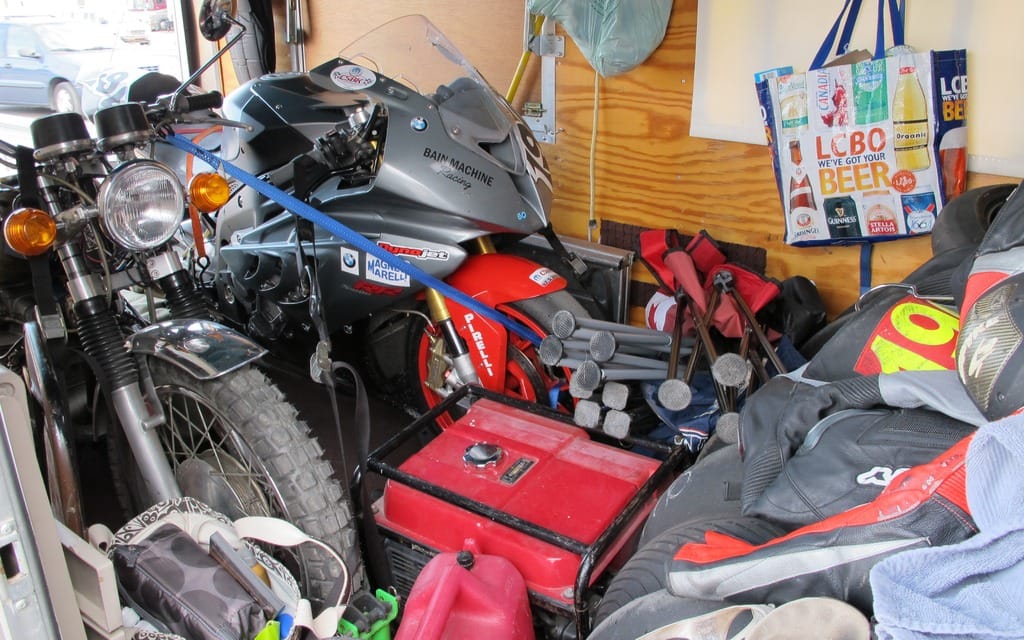 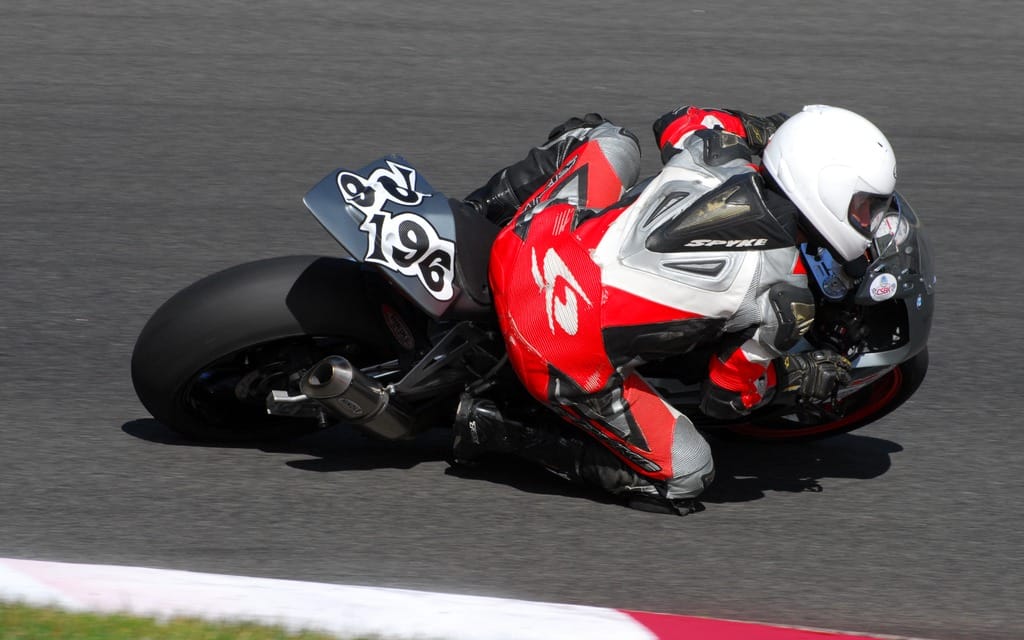 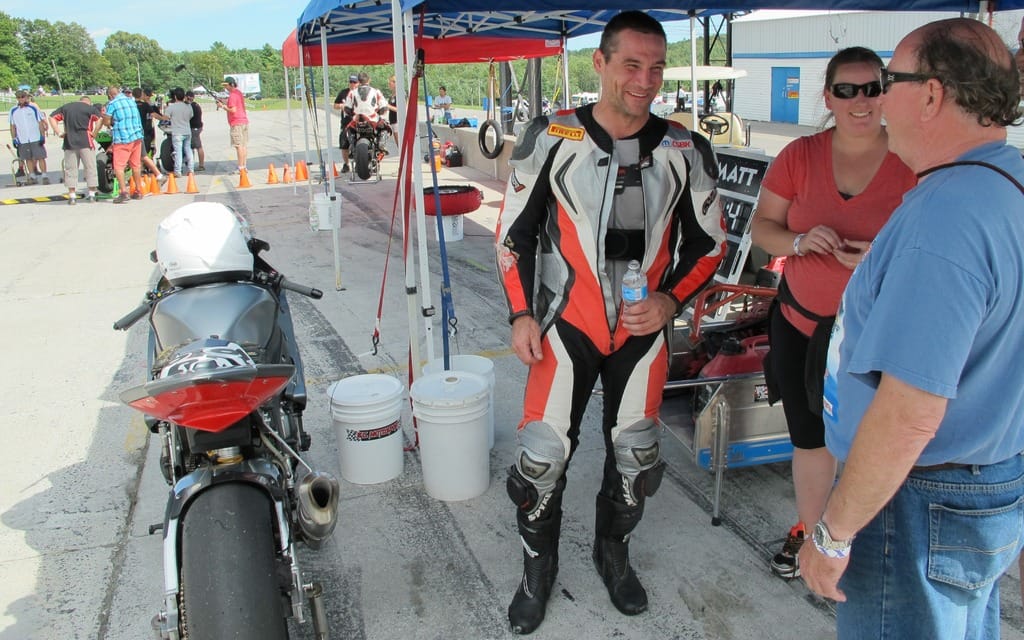 The Private Life of a Privateer

Standing against Mosport’s pit wall I hear the leaders approach before I see them. Then they round the final corner into view. But I don’t turn my head to follow as they dart past—I keep my eyes fixed on that last corner. Eight bikes pass before I see what I’m waiting for. Then, in borrowed leathers and a blank white Arai without a sponsor’s name in sight, Matt Cooper hits the front straight on his BMW superbike.

Cooper will never win a pro Canadian Superbike race. He’s fast—very fast—but others are faster. And he’s not being paid to do this. Cooper is a privateer, as is everyone else in Canadian road racing these days. He may win a few hundred dollars on a weekend, but the cost of competing will run into the thousands. Every weekend. There are travel expenses, race fees, fuel, parts and tires—this weekend at Mosport costs him $1,200 in tires alone—and he’s out-of-pocket for all of it. “I try not to think about that,” he says. When there’s work to be done there’s no official pit crew, just Cooper, his girlfriend Michelle, and friends or family who show up. This weekend help comes from longtime friend Scott Bain of Bain Machine Limited, where Matt works part time as a machinist when he’s not on contract as a mechanical engineering technologist.

Originally from Kincardine, Ontario, but now living in Guelph, Cooper began his racing career in 2004 at age 26. After several years of success in 125 and 250 cc classes, he moved up to superbike in 2007 on a Yamaha R1. A broken collarbone shortened his first season on the R1, and the following year the bike was plagued with mechanical problems. Then Yamaha withdrew from road racing, and the other brands that continued to support the series insisted that Yamahas be banned from the superbike class.

“It was frustrating,” Cooper says. “I had no affiliation with Yamaha, and yet I couldn’t race.” So he did what any red-blooded racer would do. “I wrote a letter,” he says with a smile. “A real letter, too, not just an email. I got a lot of signatures, but it didn’t do anything. The ban was a political thing, and in the end I don’t think it punished Yamaha, but it kept me from racing.” Though the ban was lifted for the 2011 season, work commitments limited his participation. But the purchase of a BMW S1000RR put him back on the grid for 2013.

Gaining comfort and confidence on a new machine is never easy, with a crash during qualifying for the season opener in Shannonville underscoring this. “I think the tires were a little cold and I lost the front end,” he says. Damage to both Cooper and the bike were cosmetic, and despite the crash he qualified 10th and finished the race in the same position. In round two, at St-Eustache, Quebec, Cooper again finished in mid-pack, that time in 12th. “That wasn’t a great result,” he says. “But it was my first time there and I was still learning the bike.” Round three was at Atlantic Motorsports Park in Shubenacadie, Nova Scotia. We didn’t go. It’s just too far. I can’t take that much time off, and it’s too expensive anyway.” In Friday’s qualifying for the two races at Mosport he ended up ninth—mid-pack again.

Prep starts early Saturday morning. Cooper works on the bike while Michelle makes oatmeal using a camp stove perched on the bed of the pickup. The setup is simple: the truck tows a small trailer, and between the racing bike and an old Honda 350 that they use for a pit bike they stuff everything needed for the weekend (chairs, coolers, food, tools, tires, and leathers). Once everything is removed a mattress is tossed on the floor and the trailer doubles as a camper. The lifestyle isn’t for everyone. But it’s nothing new for Michelle. “My dad raced sidecars and I’ve done some racing. We met at a track,” she says, gesturing to Matt. “I’m a track rat, so I’m used to it.”

After Saturday’s practice Cooper talks about two of the fast teenagers—Bodhi Edie and Mitch Card. “They’re a little more fearless,” he says. “I mean, I push, but I know I’ve got work on Monday. I’ve got to pay the mortgage.” But there’s no time for rumination—he’s got to get ready for the race. That means fresh tires, an oil change, and suspension maintenance. In an effort to make the S1000RR’s handling more like his old R1, Cooper has disabled the BMW’s traction control and ABS. For Cooper, it comes down to comfort and familiarity. “I feel I can get a better drive without it,” he says. “The traction control is a bit intrusive, cutting the power as soon as the rear wheel starts sliding. When I want to get a good drive a little bit of slide is OK.” Having finished prepping the bike he retires to the trailer for his pre-race nap.

Saturday’s race is a thrilling battle between Bodhi Edie, Jordan Szoke, and Alex Welsh for the top three spots. After a great start Cooper hangs tight with a group of riders battling for spots five through eight, and he eventually finishes ninth. Though he hasn’t improved from his qualifying position he has improved his time, his fastest lap of the day a 1:23.825. Afterwards he’s optimistic about Sunday’s race. “The bike seems to be pretty good,” he says. “I just need to pick up some time on some lines and braking and I should be better tomorrow.”

There’s no lack of help on Sunday as more friends and family stop by to lend a hand. After lining up on the grid Cooper has another good start, and much as in Saturday’s race, he keeps close to the mid-pack mêlée. After some hard-fought laps holding eighth, he finishes Sunday’s round, again in ninth. Cooper is beaming when he dismounts the BMW, and for good reason. He’s set a new personal best at Mosport with a lap of 1:22.929.

“I’m happy with the results,” says Cooper as they pack up to head home. “I got progressively better each time out. Of course you want to catch those guys ahead of you, but I’ll only push to a point I’m comfortable with. I need another race tomorrow to be even better.”

Cooper’s season ends on a low note. At the series final round at Mont-Tremblant, Quebec, he loses the front end and crashes in qualifying. This time the damage is more severe. “The engine case was cracked,” he says, “and the radiator, too.” That was the end of the weekend. But as Cooper flew past the Mosport finish line on that Sunday in August, Scott Bain summed up the allure of racing. “It’s addictive. You can’t snort nothin’ up your nose that’ll compare with this.”