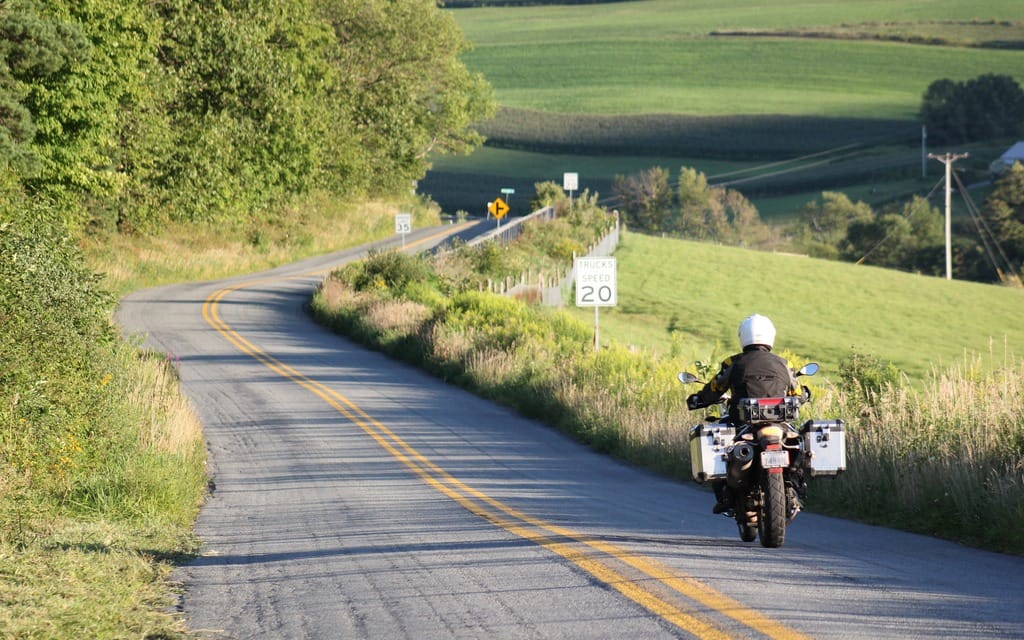 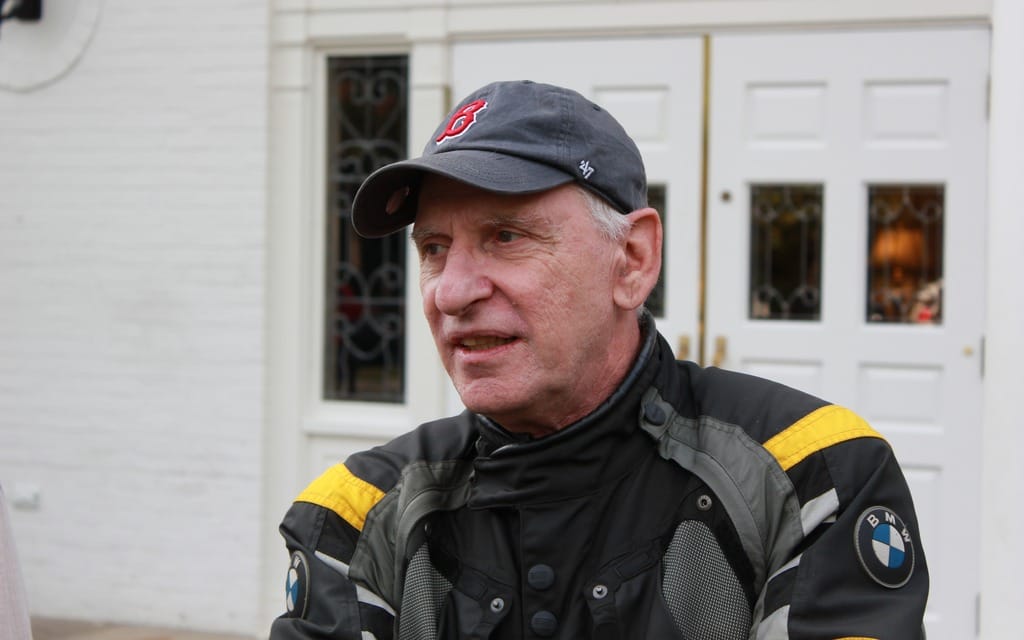 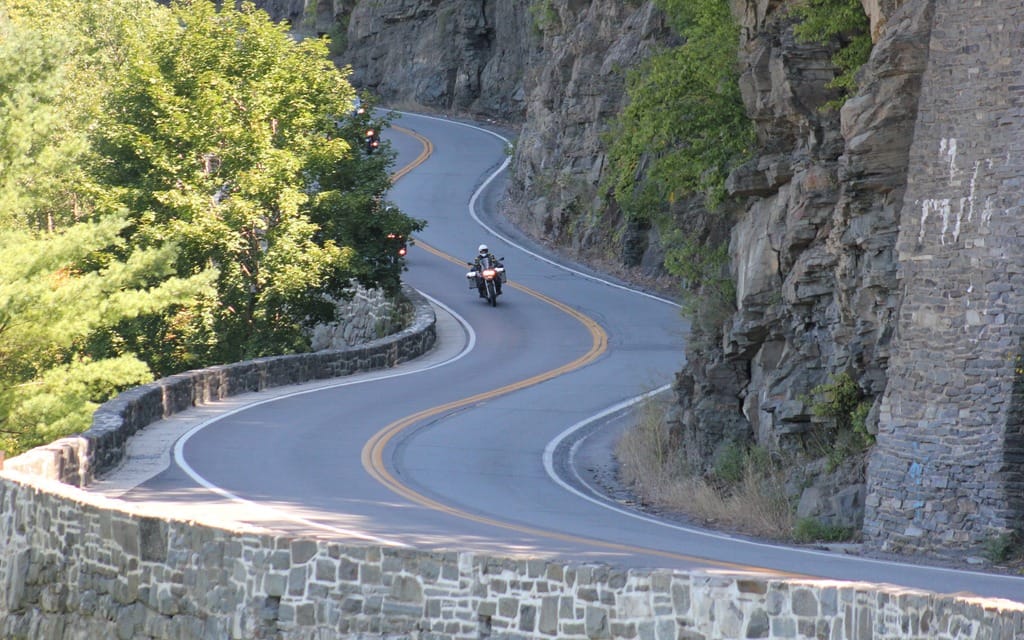 On any given Sunday, legions of adrenalin-starved riders from the Toronto area make the 250 km pilgrimage northeast to Bancroft, Ontario, to ride one or two mildly entertaining (and heavily policed) stretches of road. It’s a pity, considering that just 300 km south of Toronto is one of the finest riding destinations in eastern North America: Pennsylvania.

Unfold a map of Pennsylvania, however, and the possibilities quickly become overwhelming. The northern part of the state is covered in squiggly lines, roads that follow the folds and creases of the Allegheny Mountains. Mapping out a two- or three-day route requires some research.

Unless, that is, you’re lucky enough to ride with Seymour Trachimovsky. Seymour has been leading groups of riders through Pennsylvania since the late 1990s. By his reckoning he’s made more than 100 trips; in a good season he’ll rack up 10 long weekends on Pennsylvania roads. Few riders can equal his grasp of the arcana of the Keystone State.

But to join the fun, you need to make the cut. A hard-nosed lawyer by trade, Seymour has no patience for prima donnas, whiners, and bad riders. As he puts it, “There are no assholes on our rides.” Considering how many riders have followed Seymour south of the border, the formula seems to work. No one has ever gotten a speeding ticket, and no one’s been hurt — at least not seriously.

“If you’re used to riding in Ontario, you need to prepare for mountain roads,” warns Seymour. “We had a guy on one of our trips that destroyed a brand new Gold Wing — crashed it into a tree and blew his bike to smithereens. He got lucky and managed to land in a patch of rotting vegetation. I walked into his hospital room afterwards and said to him, ‘So they tell me you’re going to die.’” Seymour grins. “Well, that’s what I wanted to say.”

After making assurances that I was not, in fact, an asshole, Seymour includes me in a four-day ride with some of his most trusted riding buddies: Darren, on a CBR1000RR, Roy and Bill on late model Gold Wings, Jonny on his FJR1300, and Seymour’s office colleague Dan on a Harley-Davidson Fat Boy. We cross the border at Buffalo and stop for the group’s traditional breakfast at the Three Girls café in Boston, New York, a favourite stop for Pennsylvania-bound riders. Then we snake our way down a series of side roads to cross into Pennsylvania at Genesee.

Our destination is Pennsylvania’s north-central region, the state’s golden zone for riding. A hundred miles wide and 70 to 80 deep, it’s bordered by New York State in the north, the town of Clark Summit in the east, and the ominous State Route 666 in the west.

At the Sylvania Diner in Ulysses, Seymour and company give me the Coles Notes on riding in Pennsylvania. I try to focus, but the restaurant’s weird collection of taxidermy is distracting. Is that a baboon wearing a baseball hat? “Pennsylvania roads are very well marked,” says Seymour. “I look for the ones with the four digit State Road or SR number. The name of the road will change constantly, so you need that number. Google Maps is starting to do that now, which makes it easier.”

Gold Wing Bill pipes in: “The cautionary speed is well posted and consistent. If you can do one corner at 35, you can do the next at 35.” Seymour nods: “And generally you can do them at about double the limit, if you’re going all out. The great thing about Pennsylvania is you can just go from great road to great road … even the connecting roads are good.”

Our route takes us south on PA 287 and then eastward on PA 414, a wide-open series of sweeping bends and steep hills. The road is exhilarating and encourages fast riding, but nearly catches me out a few times with sharp corners on the other side of steep crests.

Deer provide another reason to ease off the throttle. This part of the state is overrun with whitetail. A few miles from our lunch stop Seymour has a close call when two gangly fawns stumble out of a cornfield and directly into his path. One runs into the back wheel of his BMW F800GS, is spun around, and scrambles back into the corn.

Our destination for the night is Clark Summit, a town of 5,000 just north of Scranton, near the northern terminus of the Pennsylvania Turnpike. It’s one of a few possible hubs for riders, perfect for a three-day jaunt, but a bit too far east for a weekend. Seymour recommends either Williamsport or State College for two-day rides, both for their location and the quality of their restaurants and hotels. “A lot of guys go to Coudersport or St. Mary’s, but there aren’t any good restaurants,” he says. If you’re late getting across the border, another option is the Royal Inn at Ridgeway, Seymour says; it’s just two hours south of Buffalo on the 219, at the southeast end of the Allegheny National Forest.

On day two we venture outside of what the guys refer to as the Seymour Positioning System. Although several members of the group are GPS enthusiasts, Seymour prefers to navigate by memory, and he’s seldom wrong. His knowledge of the local roads is impressive, and he backstops it with the most detailed set of maps I’ve ever seen. “Way before Google, the Pennsylvania Department of Transportation was putting out these incredibly detailed road maps. Each one is as big as a dining room table. They’re unwieldy, but they’re the best way to discover the teeny little roads. I always keep a set in my saddlebags.”

On this morning we head south, then northeast on PA 507 to the Delaware River. We follow PA 590 eastward, crossing into New York state over Roebling’s Bridge. Designed and built in 1847 by John A. Roebling, the designer of the Brooklyn Bridge, it’s a former canal aqueduct that is now recognized as the oldest wire suspension bridge in the United States.

River roads generally make for pleasant riding, and NY 97 is no exception. But the real thrills come near the end, just a few miles outside Port Jervis, on the New Jersey border. The Hawk’s Nest is a tightly winding series of curves cut into a rock face high above the Delaware. It isn’t technically challenging, but it’s a gorgeous piece of road that has been featured in dozens of movies and automotive ads.

Another night in Clark Summit and it’s time for the main event. State Route 125 is a road that carries a reputation almost as weighty as The Dragon in North Carolina. Operating on memory alone, Seymour leads us southwest through a maze of four-digit state roads that bring us to 125’s southernmost point, just west of the crossroads of Interstate 81 and US Route 209.

This is Northumberland County, the heart of Pennsylvania’s massive coalfields. The road switchbacks up and over undulating ridges stuffed with anthracite, down into forested basins, and back up again. Sharp Mountain, Broad Mountain, Mahantango Mountain, Line Mountain, Mahanoy Mountain — each rises up and falls away beneath our wheels. It’s about as good as riding a motorcycle ever gets.

By now the dynamics of our group riding have been established. Seymour takes the lead until we hit the curves. Then, with a wave of his hand, he unleashes Darren on the CBR1000R. I take second place, thanks to the brutally powerful BMW K1600GTL I’m riding. Jonny’s next on the FJR, followed by Seymour and the Wing riders, with the big touring bikes maintaining an impressive pace despite 15 mph curves. Dan brings up the rear on his Harley, the sound of scraping footboards echoing through the hills.

With the exception of Dan and me, the guys in this group ride together frequently. They don’t socialize much otherwise; motorcycling is the glue. They’ve all met Seymour through riding friends, or riding friends of riding friends. As Darren says, it’s six degrees of Seymour. Wing rider Roy is another long-time riding companion, and as he cheerfully tells it, he was a long-time employee of an Ontario nuclear facility, eventually absorbing a potentially lethal dose of radiation. He was granted retirement at 50 with a full pension. More than a dozen years later Roy is still as healthy as a horse, and spends his free time racking up miles all over North America.

Our group spends the night in State College, home of Penn State University, then saddles up to take the long way home. We follow Seymour’s nose for great roads west, then loop north to hit the Wykoff Run, a stunning nine-mile sprint that follows a trout stream through a pristine forest valley. A herd of more than 600 elk roams these woods, adding an extra frisson to every corner. Although the Wykoff Run lacks the elevation changes of SR 125, its corners have a more predictable arc and camber. It’s fast and smooth, and never catches you off guard.

Like most of the roads we’ve ridden, there’s very little local traffic on Wykoff Run. Seymour says his riding groups know these mountain roads better than many locals, and sometimes they end up giving advice to area riders.

“The Clarion River Road [at the southern end of the Allegheny National Forest] is very well known to locals,” says Seymour. “But what they don’t seem to know is that there’s a piece of that road east of Route 899 that’s three times as long and a much better road because there’s no one on it. The west side is always crowded with campers and bikes just cruising through. But the east side goes along the river all the way, without trees to block the view.”

I write a note to remind myself, in case I return without the benefit of the Seymour Positioning System. I pause for a moment, and then ask him the question that’s been on my mind for days. Doesn’t he mind that Cycle Canada is going to publicize some of his favourite roads? Seymour brushes off the question. “I’m not shy about sharing roads,” he says. “Who cares? Enjoy yourself!”