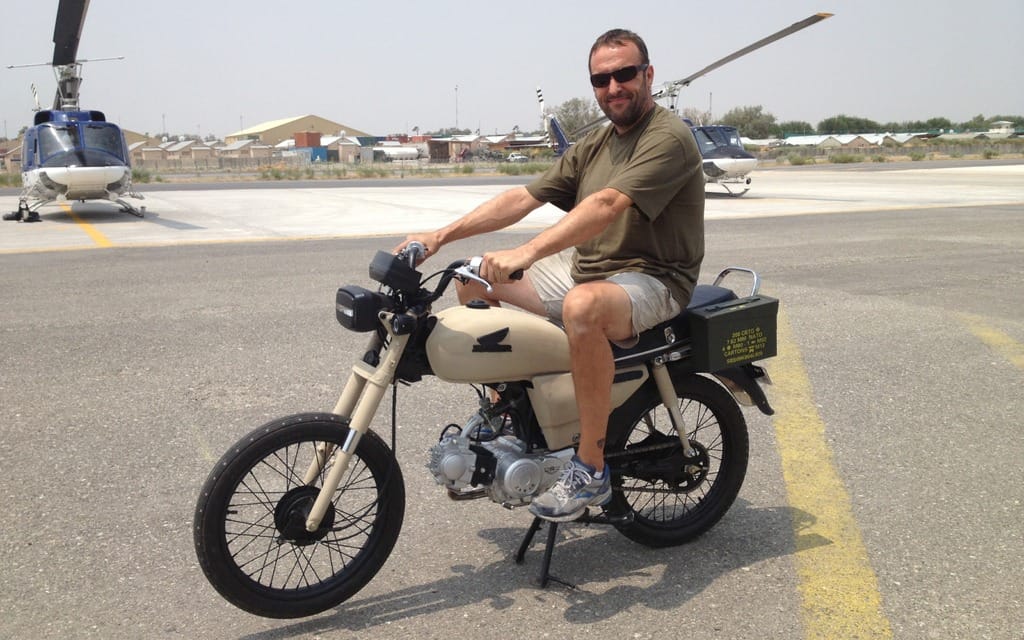 Worst feature: gravel in the carburetor

The perimeter of FOB Fenty, the American forward operating base at Jalalabad, is neither a pleasant place for a stroll, nor a good place to get careless, but that didn’t matter when Mike Hume, a B.C. boy, started working there as an A.M.E., an aircraft maintenance engineer. When Mike’s at home in Rossland, he rides a new Moto Guzzi Stelvio NTX and an old Guzzi T3 (his wife rides a Monza, and their son rides with them in a sidecar). Tyler Strachan (pictured above) lives in an aircraft hangar that he built in Wetaskiwin, Alberta, with his girlfriend. He rides a Speed Triple R (she rides a CBR600RR). The unpleasant aspects of a walk around FOB Fenty weren’t of consequence to him, either, when he started working there as an A.M.E.

Tyler: “But then the base commander closed the crosswalk that we used to get across the runway from our barracks to the dining facility, and it became a three-mile walk around the perimeter to go have a meal. So while our co-workers were busy buying the shops out of $100 bicycles, we decided on a more entertaining solution.”

Mike and Tyler became good friends, and since both were jonesing for their bikes back home, the nature of Tyler’s “entertaining solution” was clear: get a haircut.

Mike: “Three or four Afghanis are given passes to come on base and they have a barbershop there. When they put a curtain on you it’s got camouflage.”

One of these barbers was an amateur bodybuilder. It’s not easy to get sports equipment in Afghanistan, but Tyler would bring him some equipment from home after a leave. “It was easy for me and it ensured I never waited in line for a haircut.”

Tyler: “He owed me a debt and he asked me how he could pay it. ‘You can get me a motorcycle!’ He said, ‘No problem. How big?’ I asked him how much he thought it would cost, and he said, ‘For you? Good price. No corruption.’”

Tyler and Mike would split the cost, and since their month-on, month-off tours were staggered, they’d each have good use of the bike.

Mike: “It was $400, and I thought we got ripped off, but it turns out we didn’t. The guy dropped it off at the gate for us and when I sat on it, I said what the hell’s going on here? All the bikes there, they put the mirrors so they face your chest, they turn them in.”

They didn’t have to repair much, says Mike. “We disassembled it in the hangar and cleaned it up, rebuilt the carb and changed some electronic ignition parts.”

“After Mike removed the gravel from the carb,” says Tyler, “and I cleaned the air filter and spark plug, we put gasoline in it and had it idling properly. We removed all unnecessary components, like signal lights, mirrors, passenger pegs.”

For a while, they used it on the base, and one day it left Tyler stranded far from the barracks. “No spark. So Mike ordered parts, but then we had to wait two weeks for them.”

Tyler: “Two weeks of down time was just the opportunity I needed to do some customization. I disassembled it completely and went through all the components to achieve maximum performance and reliability, then painted it.”

They got the paint from a U.S. military crew that looks after Chinooks, says Mike. “We painted the whole thing U.S. military desert brown. And then Tyler got his hands on some ammunition cans and he made panniers out of them. And he put some HID lighting on it. It’s this hokey little bike and you turn on these lights and it lights up a mile in front of you.”

The Zamir runs well now, but getting it to that point involved some unorthodox procedures. “We drilled holes in the muffler until we reached optimum tuning,” says Tyler. The panniers came from an army friend, “so that we could haul food back from the kitchen.” They’ve put about 700 km on it, without much to complain about, and it’s been fun. Tyler: “On a nice evening after our maintenance on the helicopters was complete, we’d both end up doing a few extra laps before parking it in its concrete bunker.”

Things went on like that for a while, but now Mike’s home, and he plans to stay that way. Still, Afghanistan was an adventure to remember.

“Tyler and I and a bunch of great guys, all A.M.E.s and avid motorcyclists almost to a person, worked for a Canadian company that won a contract in Afghanistan with the U.S. D.O.D. back in 2009. It was to transport whatever was necessary for them from a base in Jalalabad. We had a number of aircraft to look after there and sometimes it could get pretty anxious. Tyler and I were two of six-to-eight maintenance guys there. The U.S. was so impressed with the service that was provided in those conditions by a Canadian company that we were given the pet name ‘Molson Air.’ We were enclosed in a compound around the airport by walls and razor wire and made our home there for the duration. As you would expect it was quite busy and noisy all the time and you were a captive within the walls. The Zamir was a welcome project.”

It was just a Pakistani copy of an ordinary Japanese motorcycle, and a small one at that, but Tyler says it could be exciting to ride. “Anyone who thinks a 70 cc bike is not thrilling would change their view after doing one lap around an airbase in a war zone with razor wire, speed bumps, and tactical vehicles to negotiate.”

Although Mike’s home, Tyler is still shuttling back and forth on his rotations, and he plans to keep using the little Zamir, even as things slow down. “The contracts are winding up, and we’ve been cutting back our operation since last summer. I’ve had several opportunities to sell the bike and make a profit, but it’s become more than a mode of transportation for me. So I’ve packed it up along with our helicopters to move to a different FOB to finish out the remaining term of our reduced contract. I’m not sure yet what the future holds for our Afghan motorcycle, but I’m still on the job and the bike still starts on the first kick.”