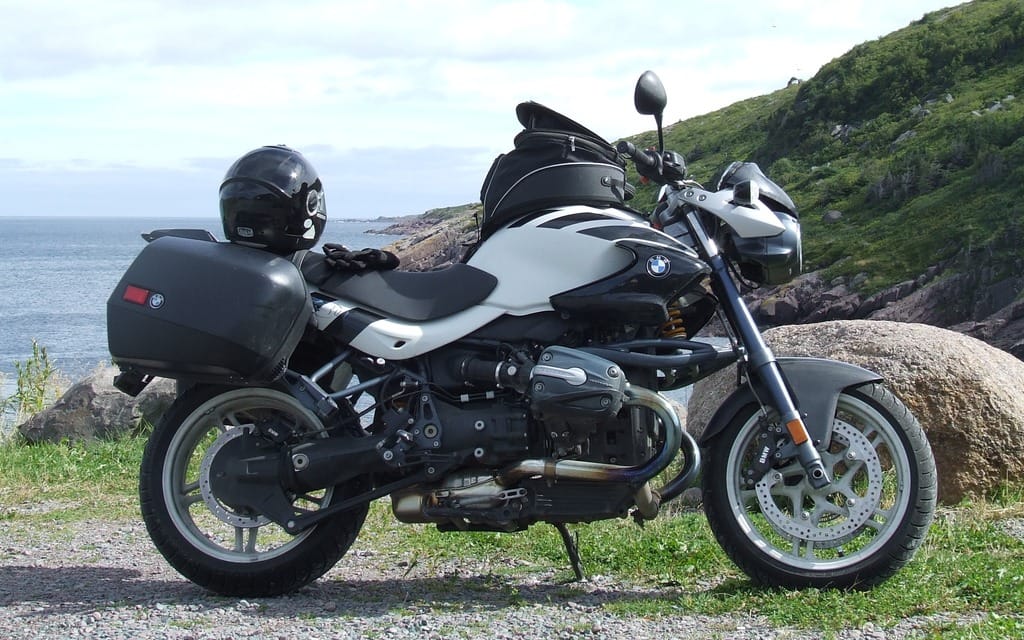 Eccentric. Idiosyncratic. Asymmetric. And that applies to his motorcycle as well.

James Nixon, though he’s been with Cycle Canada for over a year, is still an enigma. It takes time for personal tidbits from our writers’ lives to trickle into CC pages, but invariably they do. We thought we’d speed up the process. Nixon is 28, has blue eyes, is an Aries, and enjoys long, moonlit rides on his BMW R1150R Rockster.

You may be familiar with the R1150R — the derivative R1200R is still in BMW’s lineup — but the Rockster is a little different. As a concept bike at Munich’s Intermot show in 2002 it generated enough interest to enter production, but not enough interest to remain in production. The Rockster kept many of the R’s components, including its 1,130 cc air-cooled boxer engine. But what sets the Rockster apart is its oddball styling, with squinty headlights and mismatched gauges (black speedo, white tach). Nixon’s is the white/black “Edition 80” model, built in honour of BMW’s 80th anniversary.

How did you end up with the bike?

We got it in 2005. My brother was working at a BMW dealer in Newmarket, ontario, at the time, so we visited often, and I fell in love with the bike the first time I saw it. I was riding a BMW F650CS back then, and the Rockster made that bike look like a plaything. It was January when we traded in the CS and got the Rockster, but it was sunny and the roads were clear and dry. I took it for a spin and have been smitten ever since.

Do you always use the majestic plural, or does “we” refer to someone else?

“We” refers to my father, who bankrolled my formative years in motorcycling. When we got the bike I was an 18-year-old high school student working part-time as a line cook at a Chinese restaurant, so there’s no way I could’ve afforded it. He had just got an R1150RT and I think he wanted me to be able to keep up. I have him to thank for the Rockster. And I do, often.

I love naked bikes, and this one actually fits me. When you’re six-foot-two it can be a challenge to find sporty nakeds that accommodate you comfortably. The Rockster’s seat is taller than the R’s, and its handlebar is wider and flatter. While someone smaller might feel like they’re hugging a big plastic exercise ball, for me it’s ideal.

I was drawn to the bike’s look, which I know doesn’t appeal to everyone. You don’t see many of them — I’ve only ever seen five. The other colour variations — copper and citrus — are hideous; they still have the blue frame, fork, cylinder head covers and headlight nacelle. But I think the white and black version looks great.

And I love the engine. Some deride it for its lack of character, but it has a certain understated charm. Sure, it’s a bit fluttery at idle, and a little buzzy over 7,000 rpm, but what a lovely midrange — resonant and buttery smooth, like a purring cougar.

There’s nothing I out-and-out dislike, but some things I’ve had to learn to live with. White rims look sharp, but only when they’re clean. And they’re impossible to keep clean. The brakes, while very good, take some getting used to. They’re servo-assisted, so modulation is key. If you’re overzealous they can be grabby, though I never really had any issues with that until I started working here, switching between bikes constantly. The first time I got back on my bike after testing others it was like learning how to brake all over again.

Have you modified it?

The only thing that’s been altered is the suspension. The front shock, part of the Telelever front end, failed on a run to parry Sound one summer. I noticed the ride becoming harsher, then the smell of burning oil that was leaking down onto the exhaust pipe. It now has Öhlins shocks front and rear. other than that, it’s bone stock.

How does it handle?

Surprisingly well, given its size. It weighs around 220 kg, I think, but, as with many BMWs, it carries its weight well. I’ve ridden with guys on sportbikes who were shocked to see how well it handled twisties.

Absolutely. It’s roomy, and though the seating position has a slight forward lean, there’s enough wind to the chest at speed that there’s very little weight on the wrists. The stock seat is very comfortable. I’ve never had any desire to change it, and I’ve put in some long days on the bike.

When we got it the odometer read 2 km, and I’ve ridden almost every one of the subsequent 53,000. I took the summer off after graduating from university in 2010 and travelled across Canada for two months, from Tofino in the west to Cape Spear in the east, logging over 19,000 km. All that on two pairs of underwear.

Any future plans for it?

I get to try all kinds of bikes, and my eyes have been opened in a lot of ways. There are other motorcycles — many others — that are lighter, handle better, and are faster and more powerful. But there’s just something about the Rockster. I’ve spent so much time on it, and it’s so much a part of what motorcycling means to me, that I can’t imagine parting with it. If in the distant future it finally quits, I’ll stick it in my living room.