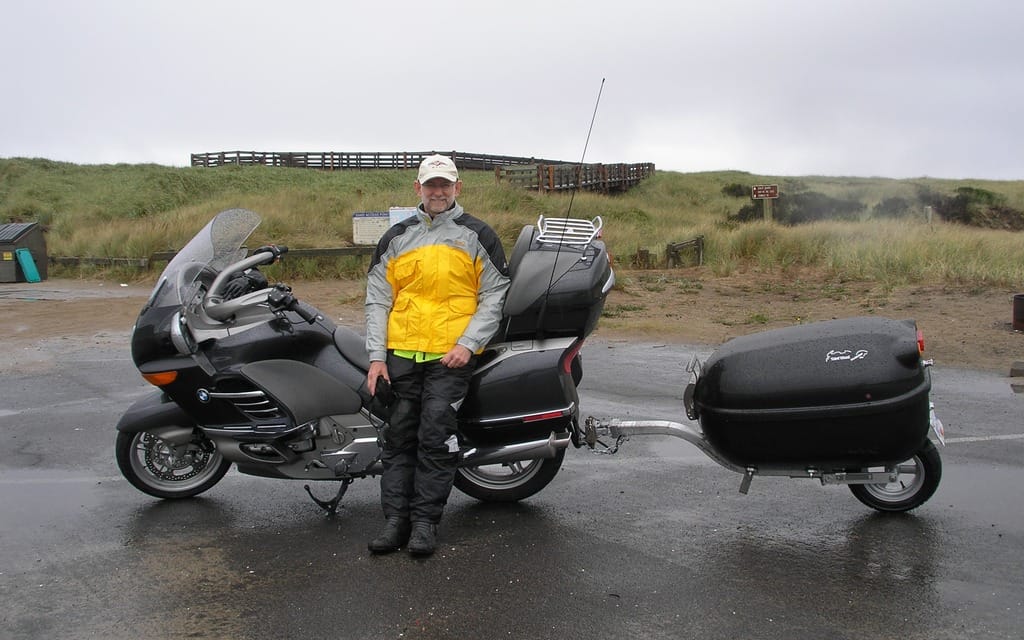 In May of 1989 my wife Chelle and I had our first son, and it was time to decide what to do with our 1983 Suzuki GS850G. It was a sad day when its new owner trailered it away in the spring of 1990. Then and there we promised ourselves that one day, when our sons (we were expecting our second son at that time) were grown, we would buy another bike.

In January of 2012 my sons and I attended the motorcycle show in Abbotsford, B.C. Surround an ex-rider with gleaming new motorcycles and you can imagine that it got me thinking about riding again. Chelle and I did a lot of research on what bike would suit us best, settling on a 2005 or newer BMW K1200LT. We spent a few weeks searching, eventually making a deal on a 2005 model that we located at a BMW dealer in Fife, Washington.

We rode the BMW for six months that year and enjoyed every minute of it. We made a number of weekend trips, in addition to day rides to our favorite destinations of Whistler, Kelowna, and Harrison Hot Springs. We managed to put on 10,000 km and started thinking about making an extended trip in 2013. For years we’d dreamed of doing a trip down the Pacific Coast Highway to California. The more we talked about it, the more determined we became. In January of last year we booked vacation time for the first two weeks of September.

The BMW has generous luggage space, but not nearly enough to accommodate two weeks’ worth of gear. We looked into cargo trailers and settled on a single-wheeled model built by Third Wheel Trailers in Ontario. We ordered one and timed its delivery to coincide with the start of riding season here on the West Coast.

We set out from Pitt Meadows, B.C., on September 3 in heavy rain, the first moisture in almost two months. We wanted to get on Highway 101 as quickly as possible, so we took the ferry from Whidbey Island to Port Townsend on the Olympic Peninsula. Our first night we camped in a beautiful temperate rain forest in South Bend, Washington. Fortunately, the rain had stopped and didn’t start again until we were back on the road the next day.

We crossed the Columbia River to Astoria on the Oregon Coast, then spent two fabulous riding days among scenic wonders on the best motorcycling roads we had ever ridden. Over the following two days we rode through the shade of magnificent redwood forests and alongside sun-drenched beaches of Northern California. The views are stunning, and if you haven’t satisfied your thirst for twisties you’re insatiable.

We crossed the Golden Gate Bridge in morning fog and spent a day in downtown San Francisco, taking in Fisherman’s Wharf, riding the cable car and catching the first day of the Americas Cup sailing race. Then, for the first time in our trip, we turned east, heading for Yosemite National Park. Both sides of Highway 120 were scorched by wildfire on our way into Yosemite, but, despite the smoke and closures of many areas, the park did not disappoint.

Riding north and east through the Sierras the following day we enjoyed the stunning circle route around Lake Tahoe. Our destination for the night was Reno, where we did a little gambling at a casino hotel, but not before passing through Virginia City and making the obligatory visit to the Bucket of Blood Saloon.

Choosing Highways 395, 44 and 139 north from Reno takes you through a mix of desert, alpine forests and lava beds all the way into Oregon. Our next must-see spot was Crater Lake National Park. Words don’t do justice to this amazing place. If you ever find yourself in south-central Oregon, do not miss it.

Getting on to Highway 97 north, we looked for Highway 26 that would take us to our final national park destination, Mount Hood. On the way we took in another must-see, the Newberry National Volcanic Monument near Bend, Oregon. We hurried up the I5 on our final day to make it home in time to return to work. We’re so happy we got back into motorcycling and are already planning next year’s trip.