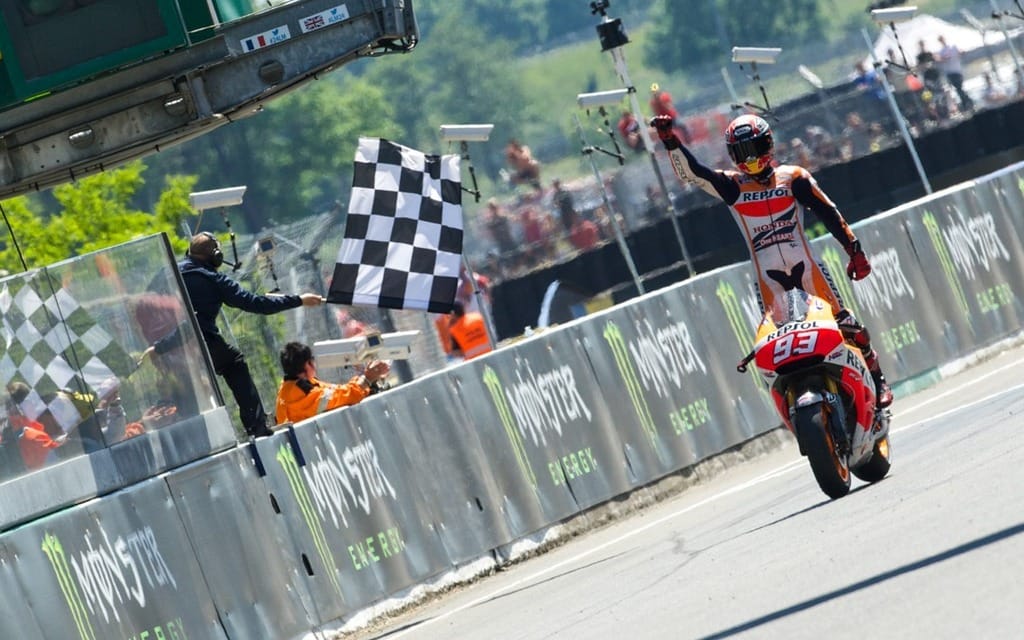 Marquez the Man in Le Mans

The young Spaniard took pole position on Saturday with a 1:32.042, a new lap record at the Le Mans Bugatti Grand Prix circuit. Despite garnering his fifth consecutive pole Marquez had a tough time in the early stages of Sunday’s race, dropping as low as 10th on the opening lap.

While Marc worked his way up through the ranks Valentino Rossi (Movistar Yamaha), Andrea Dovizioso (Ducati Team), Stefan Bradl (LCR Honda) and Pol Espargaro (Monster Yamaha Tech 3) were glued together at the front, with Rossi and Dovizioso exchanging the lead several times on the first few laps. But then the field spread out, Marquez slicing them apart like a maestro cortador, and with Rossi running a corner wide Marquez took the lead with 15 laps remaining.

Marquez went unchallenged after taking the lead, continuing his perfect season with a fifth straight win (and dethroning Mike Hailwood as the youngest ever rider to win five successive races in the premier class). Rossi took second, 1.486 seconds behind, his second runner-up result in as many races. An excellent ride by Alvaro Bautista (GO&FUN Honda Gresini) was good enough for third, 3.144 seconds back. For full race results, click here.

Marquez’s victory adds to his commanding lead in the overall MotoGP championship standings with a perfect 125 points. His Repsol Honda teammate Dani Pedrosa is second overall with 83. Valentino Rossi isn’t far behind in third with 81 points.

The next MotoGP race is at Mugello, Italy, on June 1.