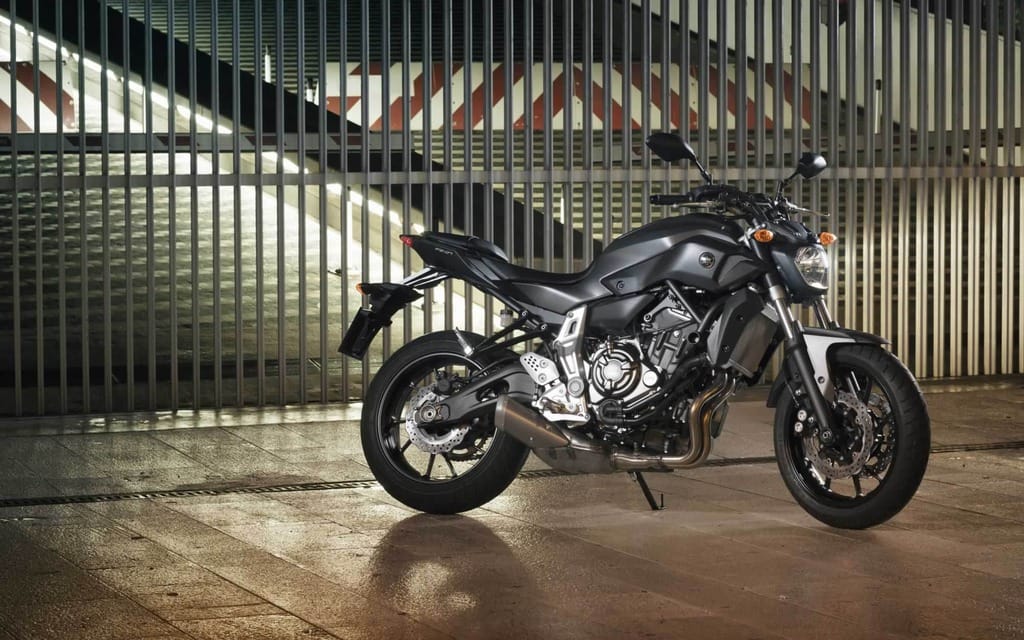 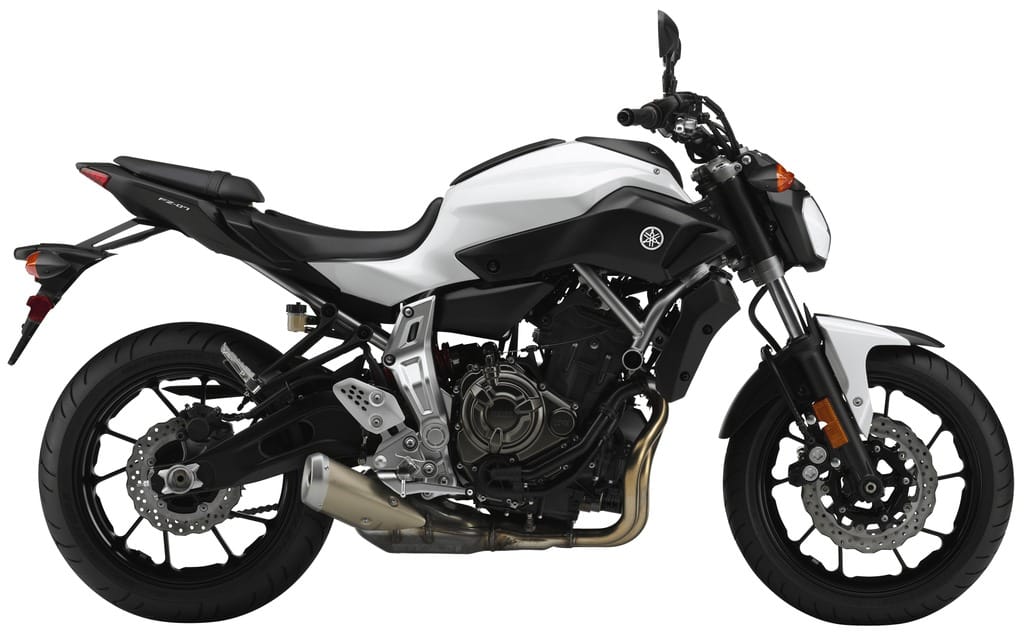 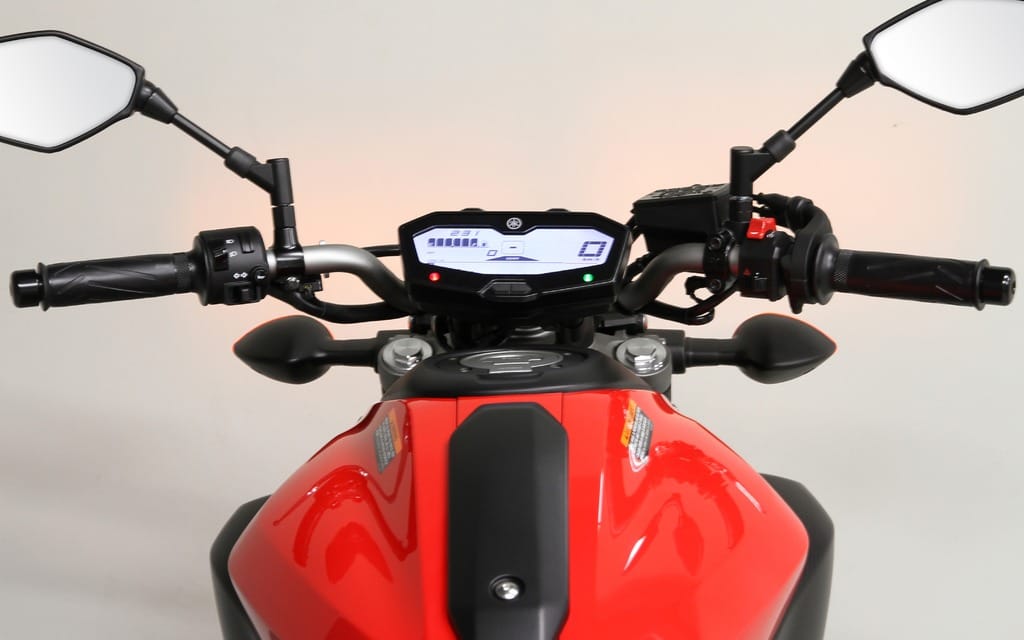 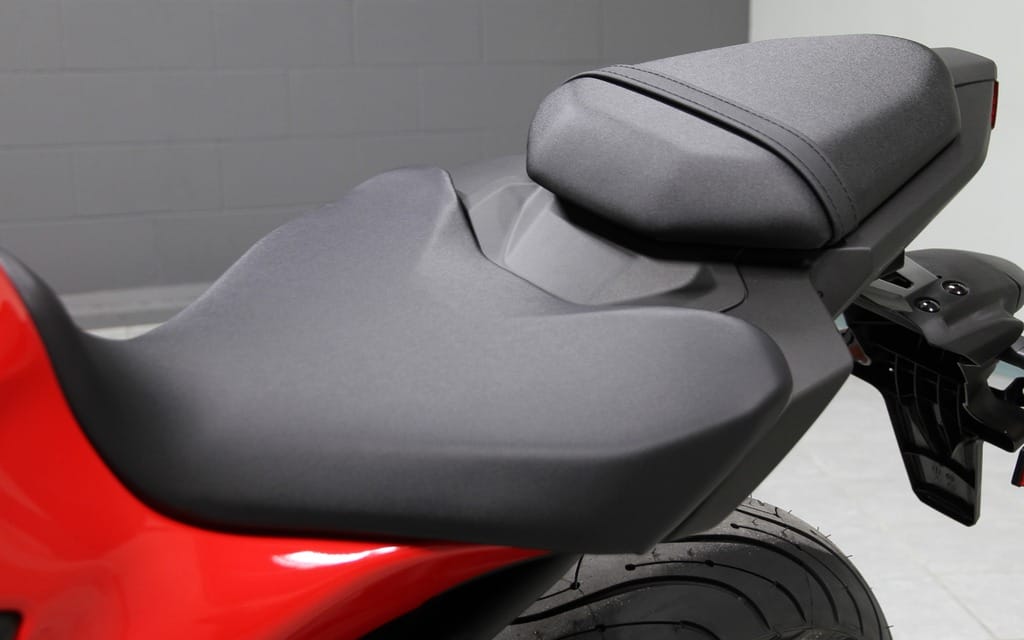 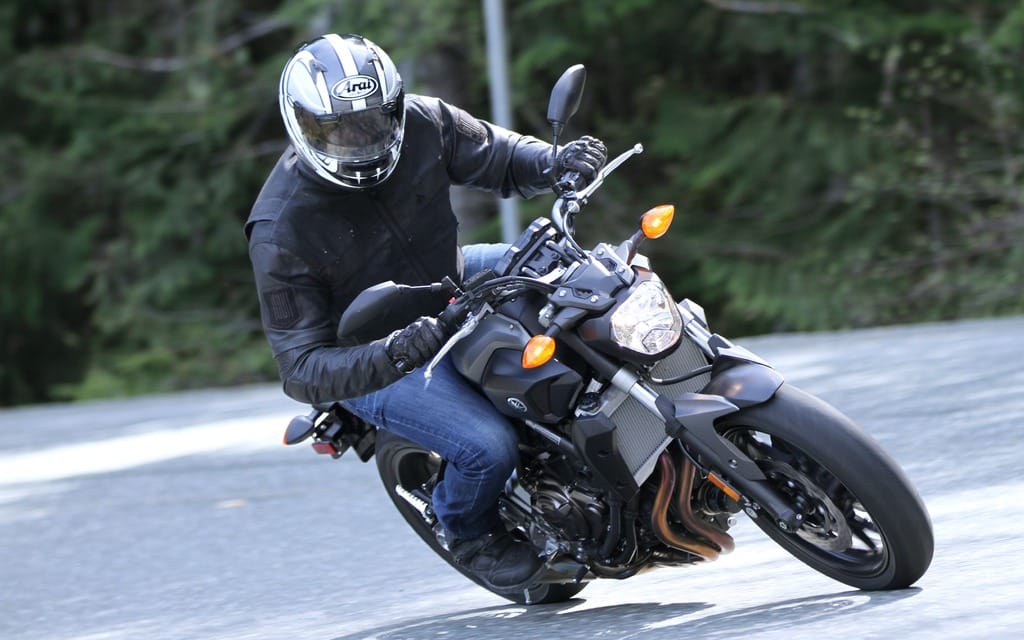 The FZ-09, Yamaha’s recently launched and beautifully beastly 890 cc inline triple, caused a genuine stir among motorcycle journalists. It’s raw, visceral, abundantly powerful and a blast to ride. However, it caused some trepidation as well; it’s a lot of bike, and in the hands of inexperienced riders it could be dangerous. But its price point ($8,999) places it within reach of the masses, while glowing reviews cause it to be coveted – especially by the impressionable and uninitiated.

Yamaha allays our fears of youthful FZ-09 follies with its new 2015 FZ-07, a smaller, more manageable sibling that nonetheless maintains the family resemblance and appeal – and at $7,299, it’s even more affordable. I sample the FZ-07 at a recent press launch in British Columbia and find that, although small, this little brother packs a powerful punch.

The FZ-07 has an all-new engine, a liquid-cooled, DOHC, 689 cc parallel twin with four valves per cylinder. Yamaha says it produces 75 horsepower and 50 lb-ft of torque. They also say it only requires regular fuel (87 octane), so filling its 14-litre fuel tank won’t break the bank. (At least, it won’t break the bank as much – gas prices aren’t what they used to be.) The bike has a six-speed transmission, with sixth gear an overdrive for smoother cruising.

The FZ-07’s steel frame is a diamond-type design. The swingarm is asymmetrical, with a “gull wing design” on the right side to provide clearance for the stubby single muffler. The 41 mm conventional fork is not adjustable, while the horizontal single shock has nine settings of preload adjustability and mounts directly to the crankcase.

Brakes are dual 282 mm discs with four-piston calipers up front, a 245 mm disc with single-piston caliper at the rear. Sadly, ABS is not available in Canada (it is in Europe) – Yamaha had to meet its price point somehow. (Still, why not offer it as an option?) Rims are 17-inchers, wearing a 120/70 tire at the front and a healthy 180/55 boot at the back.

In terms of size, the FZ-07 is svelte. It’s narrow and compact, with a flat seat that won’t shunt you forward into the tank (gents, your genitals will thank you). A seat height of 805 mm should be manageable for most riders. Adding to that manageability is the FZ-07’s incredibly light curb weight of only 180 kg.

Controls are simple and straightforward; there are no riding modes or traction control settings to select, no electronic suspension adjustments to make. The digital display is clear and easy to read – though it’s quite low, requiring me to drop my chin to see it – with a speedometer, bar-style tachometer, fuel gauge, gear indicator, clock, and ECO indicator. It also shows your choice of odometer, trip meters, fuel consumption figures, air temperature or coolant temperature. The display also has adjustable back lighting.

The FZ-07’s performance, while by no means jaw-dropping, is still impressive. The engine has a great blend of torque and smoothness – more torquey than many twins, smoother than the FZ-09’s triple. Yamaha says the FZ-07’s mill is made for riding in the real world (“fun riding, NOT lap records”), with the meatiest part of its powerband situated in the midrange. Things get a bit buzzy approaching redline – though with such great pull through the midrange there’s no need to rev that high anyway. Despite its toned-down nature, the FZ-07 still sounds great – not the same howl as the FZ-09, but enough character to elevate your pulse. Clutch pull is light, fueling well sorted, and shifting precise and positive.

I found the suspension to be a touch on the soft side, though that probably has more to do with my size than the bike’s shortcomings (smaller riders had no complaints). For me, adding some rear preload would likely have helped firm up the ride. The FZ-07 holds the road well regardless, and easily absorbs all but the worst bumps B.C. has to offer.

The braking setup provides plenty of stopping power, though the initial bite of the front brake is less than I expected – perhaps an unfair comparison to the ferociously good front brake of the FZ-09. Still, steady pressure results in smooth, solid stops, and the brakes are entirely adequate.

There’s no denying the FZ-07 is a small motorcycle – it feels more like a 500, even a 300 cc bike when you’re straddling it. Although for me it’s snug, it’s also surprisingly comfortable. After 300-plus kilometers traversing Vancouver Island I only experience some mild discomfort from its somewhat firm seat. The riding position is mostly upright (just a hint of forward lean), pegs place your feet under your hips, and narrow grips fall readily to hand. Steering is light, and the bike is quick and agile, making it a joy to throw around on B.C.’s beautifully flowing roads.

The FZ-07 is a well-balanced bike that’s a bargain to boot. It’s ideal for riders stepping up from something smaller, and is a bike that initiates won’t soon outgrow. It provides an unintimidating platform to hone riding skills, bridging the gap between entry-level bikes and larger, more sport-focused machines. But it’s not just for newer motorcyclists; I’ve been riding for over a decade and genuinely enjoyed the FZ-07.

Want one? It’ll be in Canadian dealerships by late June. Want more information? Watch the pages of our print publication for full coverage of the FZ-07 press launch.