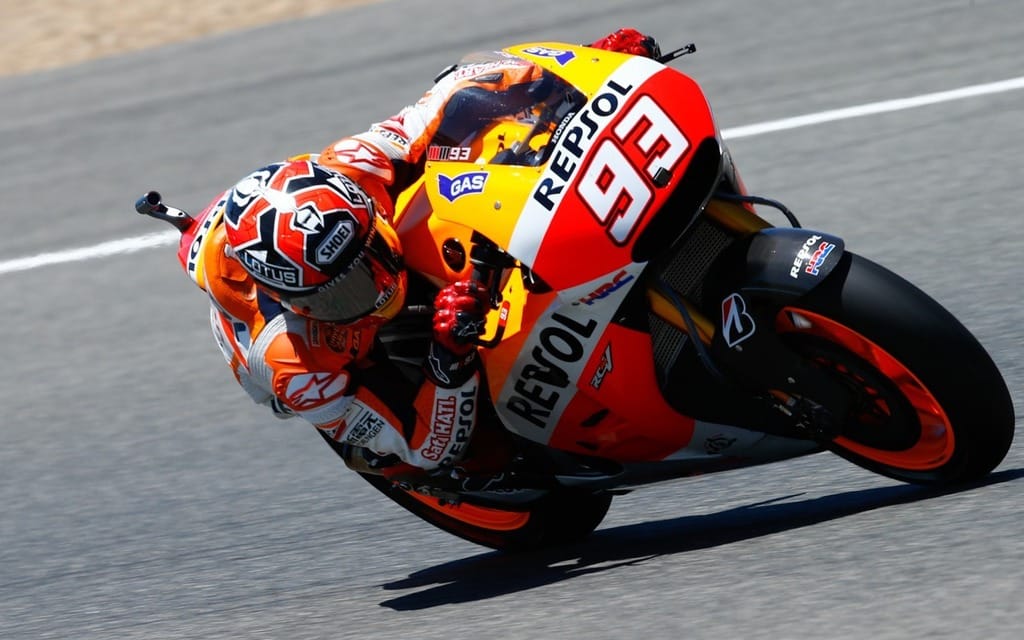 The young Spaniard took pole on Saturday with a time of 1:38.120, beating Jorge Lorenzo’s six-year-old “best lap” record in the process.

After scrapping with Valentino Rossi (Movistar Yamaha) on the first lap Marquez then settled into an incredible rhythm, putting in successive fastest laps to open up a gap that would prove insurmountable.

Meanwhile Rossi, Jorge Lorenzo (Movistar Yamaha) and Dani Pedrosa (Repsol Honda) were glued together for much of the race. Despite their proximity, no one was able to make a move until Pedrosa passed Lorenzo for third with six laps remaining. Pedrosa then made a push to catch Rossi and came close on the last lap, though The Doctor closed the door through the final few corners.

Marquez’s victory was his first ever at Jerez, coming in his 100th Grand Prix appearance. Rossi put in a fabulous ride to claim second position, finishing 1.431 seconds behind. Pedrosa took third 1.529 seconds back and continues his string of podium finishes this season. For full race results, click here.

“I’m really happy, it’s a different kind of victory,” said Marquez. “I struggled a little bit this weekend and the level is so high with Pedrosa, Jorge and Valentino who are all very strong. In the beginning I was able to open a gap and push. I know that Dani and Valentino are so strong at the end of the race and with new tires I felt better than on old tires so I pushed very hard at the start.”

Marc Marquez now leads the overall championship with a perfect score of 100 points, while his teammate Dani Pedrosa is second with 72. The veteran Valentino Rossi is third overall with 61 points.

The next round of MotoGP is on May 18 in Le Mans, France.