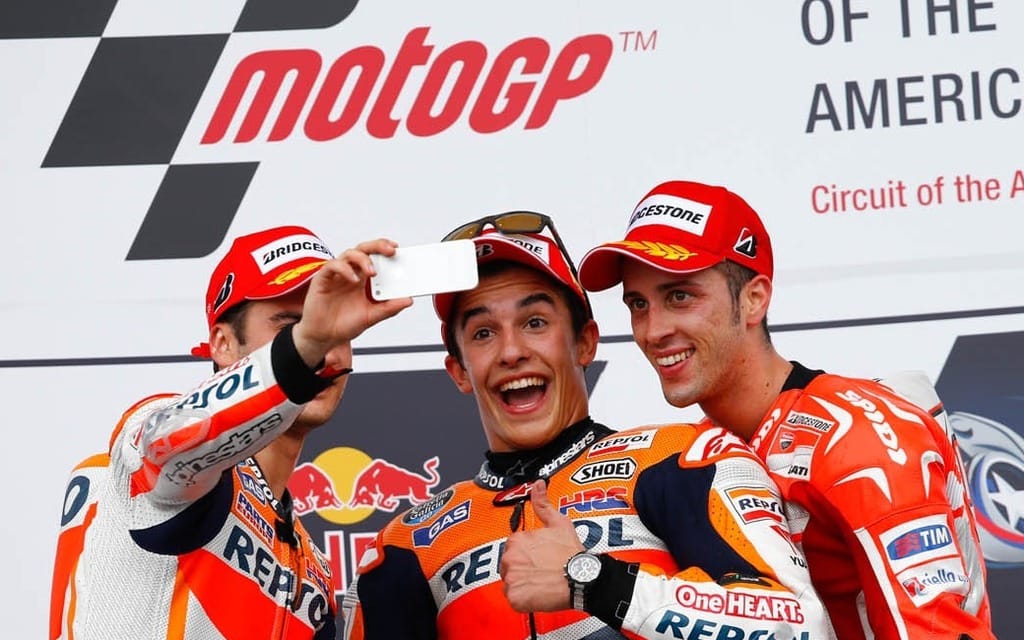 Repsol Honda’s Marc Marquez claimed his second straight victory on Sunday at the Circuit of the Americas in Austin, Texas. MotoGP’s defending champion started from pole position and put together an utterly dominant ride, gapping most of the field by 20 seconds or more.

The race was not so good for Jorge Lorenzo (Movistar Yamaha). Last year’s championship runner-up had a disastrous jump start and incurred a ride through penalty, forcing him back to last place. Lorenzo worked his way up through the field and salvaged six championship points by finishing 10th.

Marquez and fellow Repsol Honda rider Dani Pedrosa got out front early and opened up a wide gap from the pack. Though Pedrosa kept his teammate in sight, he was unable to challenge for the lead and settled for second place, finishing 4.124 seconds behind Marquez. Ducati’s Andrea Dovizioso placed third after starting from 10th on the grid, finishing 20.976 seconds back of the leader.

Dovizioso’s third-place finish was his first podium as a Ducati Team rider. It was also Ducati’s first podium since Valentino Rossi left the team in 2012.

Nicky Hayden (Drive M7 Aspar) finished in 11th position, while fellow American Colin Edwards (NGM Forward Racing) was forced to retire due to a technical problem–truly a shame, as the 40-year-old was unable to finish his home race after announcing last week that he will retire at the end of the season.

A pair of wins gives Marquez the lead in the championship standings with 50 points, while teammate Pedrosa is second with 36. Valentino Rossi (Movistar Yamaha) is third overall with 28 points.

The third round of the season takes place April 27 at the Autódromo Termas de Rio Hondo in Argentina.