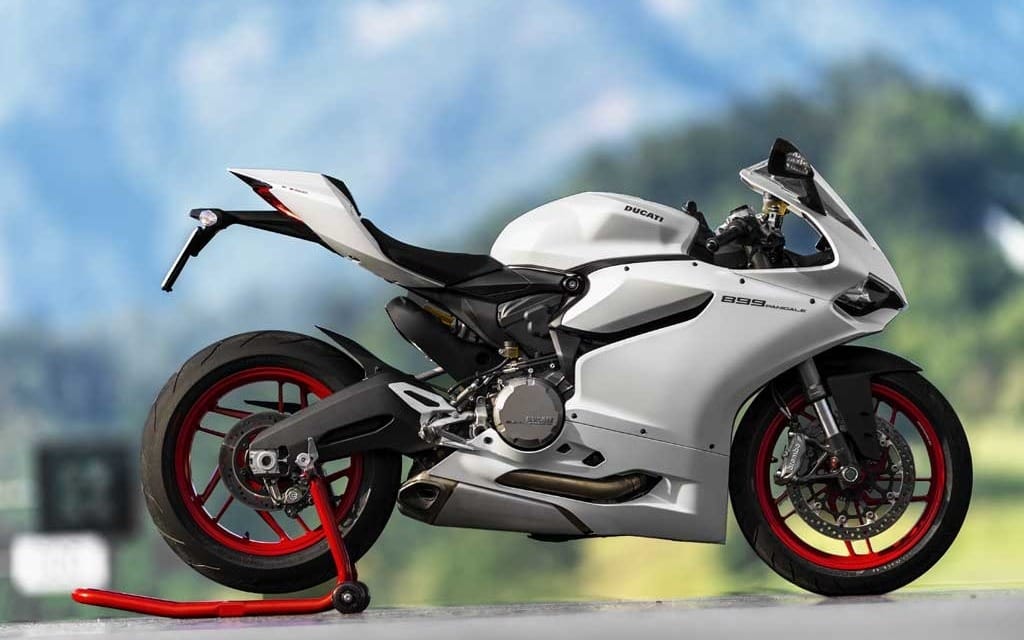 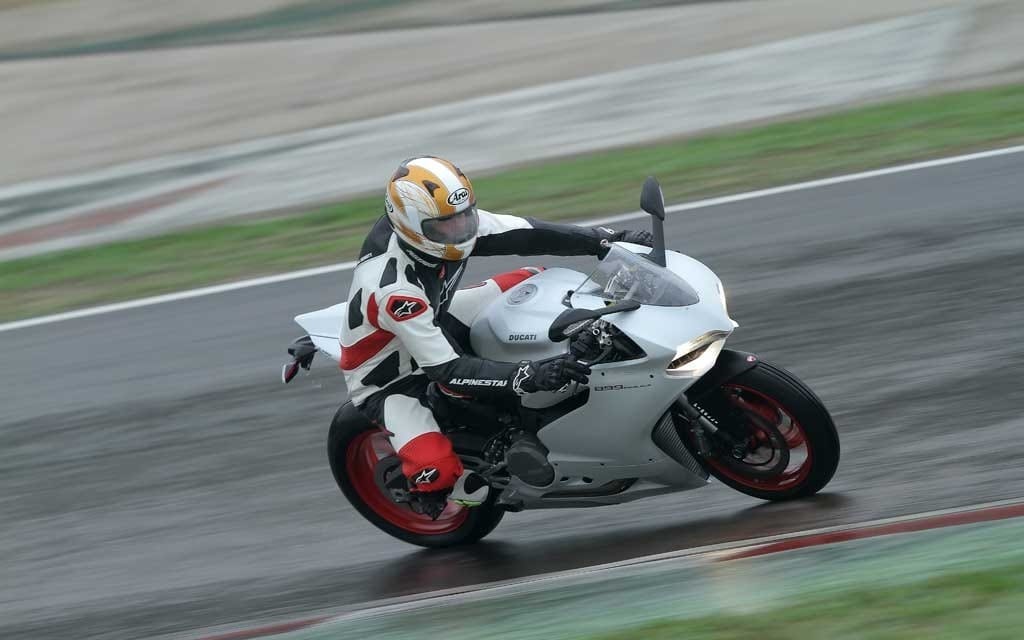 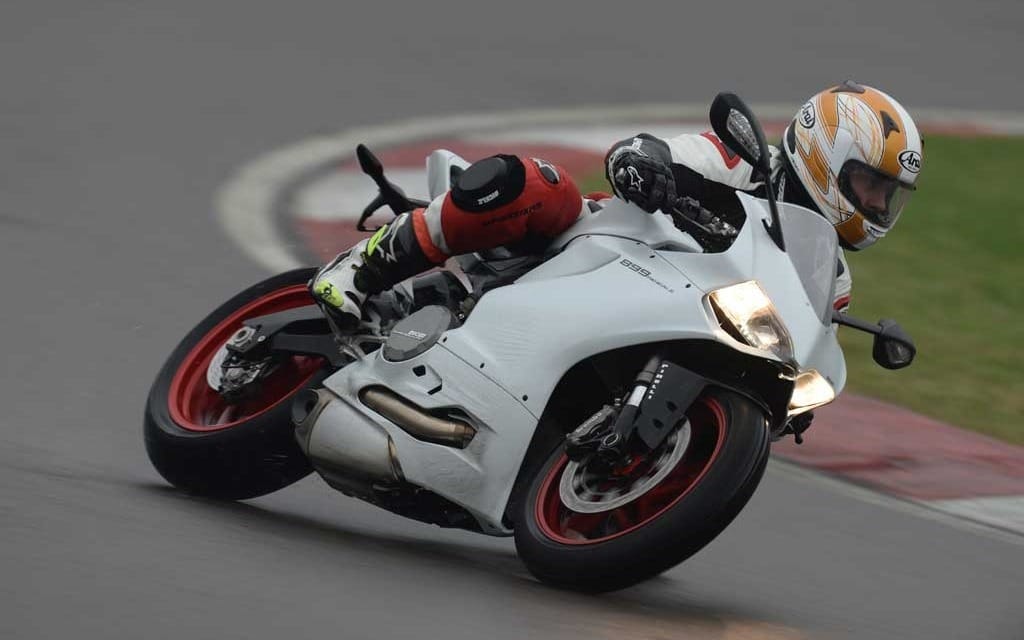 With the introduction of the 899, Ducati tames the Panigale platform just enough to make it a bike for all reasons

By Neil Graham
Knowledge is peculiar. The more you have the more you realize that you’ll live your life never really understanding much of anything. I sat in a room once with magazine hacks and reps from a tire company listening to a tire engineer explain, on a molecular level, how a tire is constructed and how it works. The engineer was patient, articulate, and did her best to use non-scientific language. When she retook her seat the only sound was the howling of the fluorescent lighting. None of us understood what she had said. (It was an absurdly funny scene, which, of course, elicited not a peep of laughter—a roomful of men in the motorcycle business had just been laid low by a five-foot-nothing middle-aged woman.) How reassuring it was when the tire reps retook the microphone and returned to the marketing jargon of earlier in the presentation.

I am standing in the paddock of one of the most famous racetracks in the world: Imola. I don’t know how it’s supposed to be pronounced, but it’s fun to bend the vowels around my tongue. Eee-mow-lah I say out loud and my breath hangs in the air. It is raining hard, and it will rain all day. It will not clear. Nobody checks the weather on the phone. And it’s dark. It’s as if a leaky tarp has been dragged over the city of Bologna and securely fixed with bungee cords that will not give. As I stand in the paddock I’m stirring up my brain trying to remember something useful that the tire engineer said. My mind is blank.

Never mind knowledge: tire adhesion is peculiar. I have been astounded by the amount of grip that a tire can give and horrified at how easily they can part ways with what’s below. And now I’m going to ride a sportbike at high speed in the wet. But I’m OK with that. My confidence comes from two things (make that three). First: rain tires. Real racing rain tires from Pirelli. Second: traction control and ABS. And the third reason is the bike itself, Ducati’s just-out-of-the-oven Panigale 899. Before I saddle up and pull onto the track, I jamb my thumb into the surface of the tire. The tire warmer has just been removed and the carcass is toasty like a coffee cup and soft like a jujube.

Wet mode, which I’ve only ever used on a bike with traction control in the dry, (and only to prove to myself and to you, the reader, that I can manipulate the electronics well enough to find rain mode) is selected and off I go. Ducati claims a peak of 148 crankshaft horsepower for the Panigale but wet mode drops it down to a claimed 110. Additionally, selecting wet mode automatically triggers a high degree of traction control intervention and warns the (standard) ABS that it’s likely to get a workout. Even the alterable engine braking characteristics are tailored to suit the low-traction conditions.

An unfamiliar track in a driving rainstorm makes the first session more of an orienteering exercise than a testing one, but a few points come to the fore. Throttle response is remarkably smooth, as in the rain the last thing you want to contend with is twitchy power application. Rolling the throttle on in a higher gear than you’d ever use in the dry on a track results in a smooth, steady haul of power. A few laps in my confidence is high (I’m not sure why—my visor is so fogged I can hardly see where I’m going) and the flashing orange lights on the dash indicate active traction control intervention. In the old days—five or six years ago—traction control worked by cutting the flow of fuel. Now the preferred method is by retarding the ignition. So effective is this strategy that even while the dash is frantically flashing the rider perceives nothing—it’s remarkable.

Rain mode is fine until I’m passed, and then, as a red-blooded male, I immediately crave more power—conditions be dammed. I switch to sport mode and the Panigale jumps to life. The tire adhesion is so remarkable that I have no idea where the limits are, so I keep going faster. I pass a person or two and then decide that I want to drag my knee in a rainstorm. I spot the photographer at the edge of the track and decide that this is the corner that I’m going to attempt it on. If I get my knee down I’ll need proof and if I crash the entire debacle will be captured by the camera. It’s a win-win situation.

I screw my nerve up, put my head down, and lay the 899 into the bend. Scrape goes the knee, to the stop goes the throttle at the exit, and down the straightaway in a fog of happiness I go. And then the rain picks up and the day is called after three sessions. Bummer.

While I can’t give you a definitive racetrack review of the 899, I can give you something much better: useful information. Very few buyers of sport bikes ever take them to a racetrack. Some people just like to ride sportbikes on the street because they like sportbikes. I’m one of those people. And I can tell you that the 899 (by uncompromising sportbike standards, of course) will make a surprisingly useful street bike.

The Panigale 899 is, obviously, a smaller capacity version of the Panigale 1199. But where the big bike is an eyeball flattener of the first order (not a lot of bikes pull that hard on the way past 250 km/h) it is also a handful—as in a handful of throttle will deposit you in the future alarmingly quickly. The 899 has more of what gets me excited—manageable power. It doesn’t matter if it’s a Ninja 300 or a superbike, wringing the neck of a motorcycle is a  joyful experience. But it’s awfully hard to do on a superbike with 180 horsepower. An estimate would place the 899’s rear wheel horsepower in the high 120s, which is enough to go very, very quickly, but not enough to terrify.

In fact the 899 seems an acknowledgement by Ducati that the Panigale 1199 is just too extreme for regular folks who’d like to do a track day or two and ride to work the rest of the time. R&D chief Andrea Forni confessed that the 100 mm bore and 57.2 mm stroke of the 899’s engine is not as “extreme” as the 1199’s and that, as expected, intake and exhaust valve diameters are smaller than on the big bike. By now the more observant among you will have noticed that the 1199’s signature single-sided swingarm has been ditched in favour of a conventional two-sided piece. This choice has been driven by both technical and marketing forces—with less power than the 1199 it was determined that a shorter swingarm was desirable, and, no less importantly, a marketing man at the launch admitted that Ducati wanted to make a visual distinction between the looks of the 899 and the more expensive 1199.

As is commonplace on Ducati’s base-model sportbikes, the fork is by Showa and the shock is by Sachs. To meet the model’s desired retail price ($15,995 in red and $16,295 for white) the bike is without electronic-suspension wizardry, but the shock’s positioning on the left side of the machine make adjustments a breeze.

A welcome change on the 899 is the switch to a narrower 180-mm wide rear tire (the 1199’s is 200 mm), which is a boon for agility. In fact the bike’s composure in the wet is reassuring: handling is light and quick but never nervous. Aiding progress in the wet is a slick quickshifter, a standard feature. And though it is only mentioned in passing at the launch, it’s worth noting that the 899’s seat has more cushioning than the 1199’s. That’s right: Ducati confessed to adding more padding to a seat. The next thing you know they’ll say it isn’t necessary to replace the cam belts every two years. They did that already? As you’ll remember from reading about the 1199, the so-called Superquadro engine uses a gear-and-chain combination to drive the overhead cams, so belts are a thing of the past.

As displacement and power creep ever higher, it’s not really appropriate to call an 899 cc (actually 898 cc) sportbike a mid-size machine anymore. Ducati refers to the 899 as a “supermid” which is as good a description as any I’ve heard for the bikes that bridge the gap between traditional 600-class machines and litre (or litre-plus) superbikes.

As technologies make the transition from novelty to commonplace it’s easy to become blasé about them, but a decade ago a track day in the wet would have meant a dumpster full of plastic body parts and bent wheel rims. That doesn’t happen the way it used to—you can still crash, of course, that won’t change, it just doesn’t happen as often.

The 1199 Panigale is Ducati’s technological tour-de-force. From the frameless monocoque construction to its sophisticated electronics to its all-new engine all the way up to the $70,000 Superleggera (read about it elsewhere in this issue). But for me, and for most of you, the 899 is the bike that does more of what we want a sportbike to do, more often, and the difference between the cost of the 899 and the 1199 will buy a lot of track days.