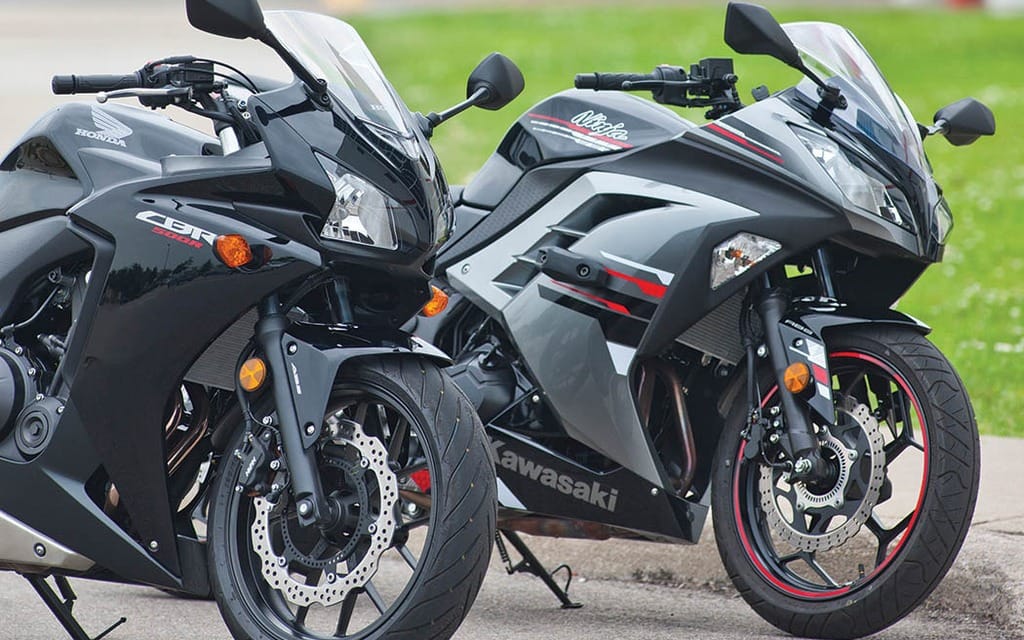 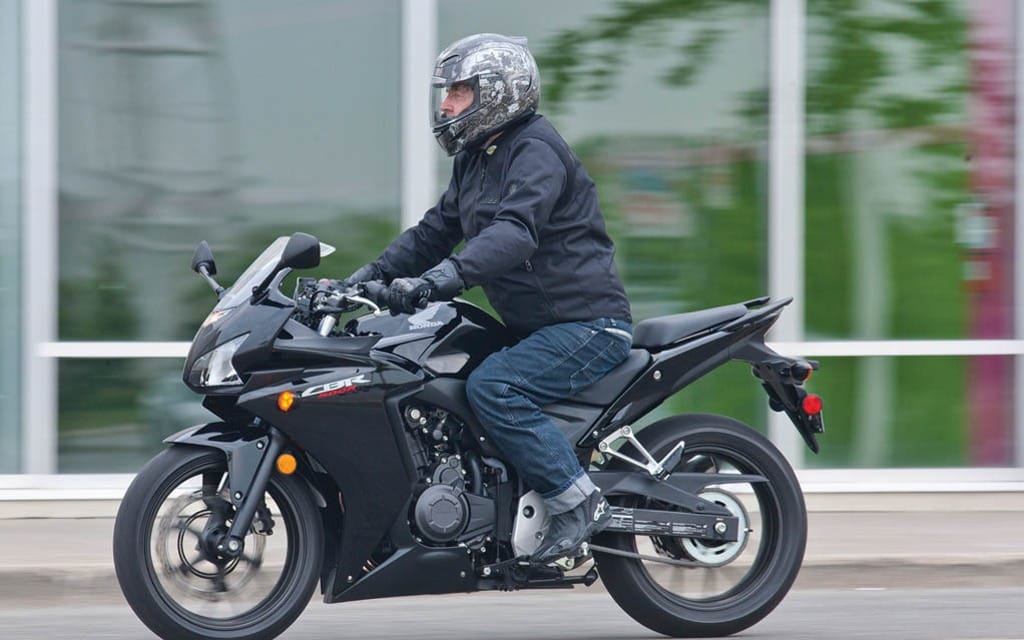 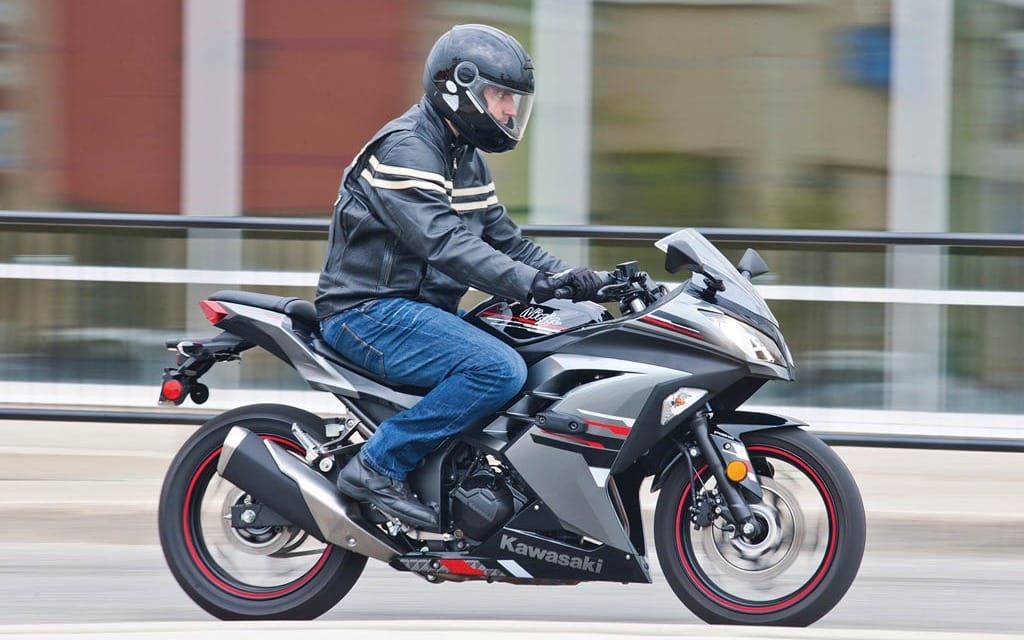 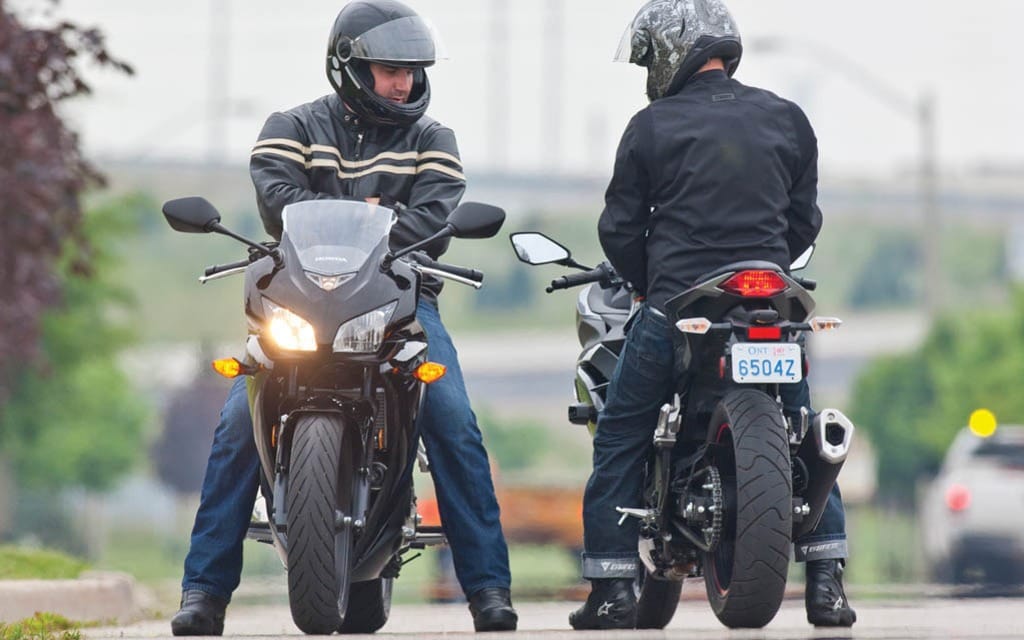 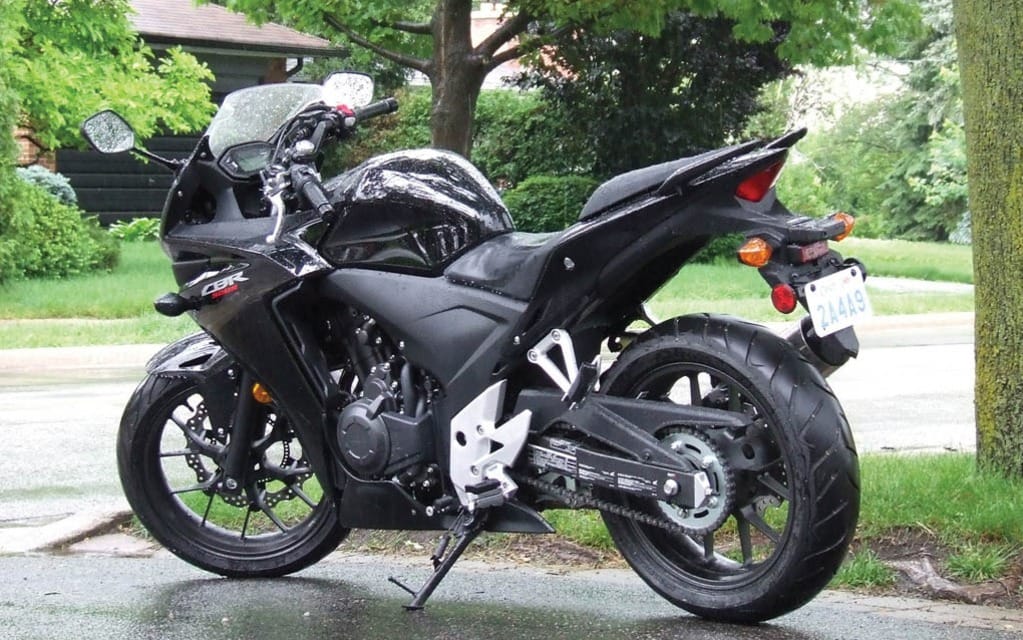 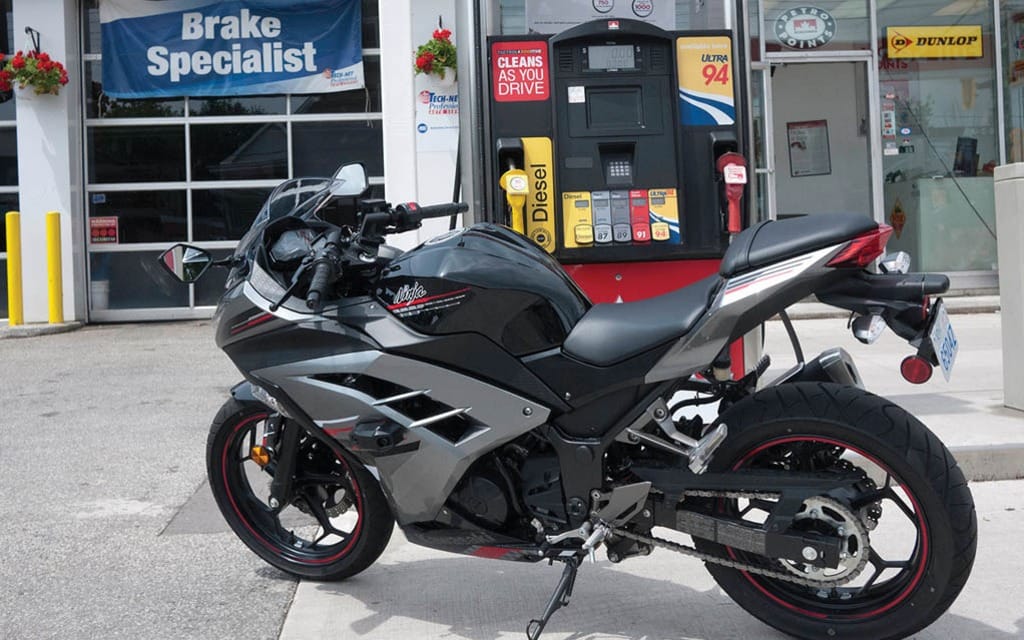 Taking the measure of two small bikes
By Steve Thornton
Photographs by Bill Petro
The idea was simple: ride toward each other, maintain a steady approach, and then exactly at the moment of intersection, turn your head and look directly at the other rider. The result would be a photograph of two motorcyclists in opposition, each reflecting the reverse of the other, only the symmetry of two heads turned face-to-face thwarting that reversal, a meeting of opposites and alikes frozen by the camera.

But photographer Bill Petro wouldn’t let it be simple. “Get closer,” he urged us again and again. And James Nixon and I would repeat the manoeuvre, sidling ever nearer, almost to the point of collision. The risk was slight. Speeds were not high. But as we passed each other, the bikes’ mirrors nearly clashed, and it was just at that point of closest approach that each rider turned his attention away from the motorcycle’s progress, hitting that intersecting moment with eyes focussed not on where we were going, but on the other rider.

For just that moment, it was a very funny sight. James Nixon is not a small guy, and at that distance, close enough to literally thumb each other’s nose, his head in that XX-L Shuberth swung toward me in a kind of momentary staring contest that seemed uncomfortably personal, the kind of interconnection that usually only happens when you’re about to kiss someone. It was almost embarrassing—if we hadn’t been passing each other at 40 km/h I would have had to blink and look away and make some kind of joke. Is that a gun in your pocket, James?

There is a thing that happens when you analyze a motorcycle’s dynamic behaviour for a magazine piece. The first time you sit on the motorcycle, you gather simple impressions: how does the motorcycle fit your body, how does the engine respond to the movement of your throttle hand? You don’t go for specifics so much as for an overall feeling about the bike. The same thing would happen for anyone with years of riding experience in setting out on a test ride.

But over time, you begin to narrow your focus, to specifically consider various aspects of the bike: how well does its fork respond to cracks in the road; how abruptly does the front brake slow the tire’s rotation? And then you try to slice the impression even more finely: does the fork rebound with smooth action after hitting that crack; does the front brake bite in a way that feels crisp? And as you focus ever more tightly on details of the motorcycle’s performance, you begin to lose sight of the whole. The bike becomes a badly damped front fork, or a brake with a soft initial grip.

In a sense, when that happens, you’ve lost your way. You’ve stopped looking at the purpose and character of a motorcycle and begun to fret about its intimate details; it’s the kind of thing that can ruin human relationships, and it can make the experience of motorcycling a kind of nitpicking contest. We can become whiners, or slavish groupies (think Harley Sportster, think Aprilia Tuono). At these moments of closest approach to the truth of the thing, you turn your head away from what’s right in front of you, and your vision restricts to matters that most owners might never become aware of, if they weren’t shouted out in a magazine.

Specifics are necessary, of course. If we forgot to mention that a Harley-Davidson Sportster’s suspension is joltingly crude, a reader who subsequently bought the bike might feel betrayed; if we failed to point out that the Tuono’s engine is the mechanical equivalent of having an exotic dancer in your bedroom, another reader who passed one up might feel cheated. But the whole, as they say, is often greater than the sum of the parts. And if we ride motorcycles for pleasure, surely it’s the emotional impact of a motorcycle on the rider, rather than the specific actions of a bike’s components, that matters more.

Where does that leave us with the Honda CBR500R and the Kawasaki Ninja 300? The overriding impression of each is that these are small bikes, and it qualifies every other impression. Consider the brakes. Each bike is fitted with a single front disc and either a two-piston (Ninja) or a three-piston (CBR) front caliper. Each responds quickly to application of the front brake, displays moderate fork dive, and slows efficiently, but neither displays the kind of bite and ferocity that a larger sportbike fitted with twin discs and four-piston calipers would; they behave as if an anchor has been dropped, not as if they’ve run into a wall.

That braking reaction and feel is a product of their size; they are not heavy, capable of extremely high speeds, or ever likely to require a brake that would perform like a larger sportbike’s. Adequacy, not supremacy, is the hallmark, and given their respective sizes, rightfully so.

When I was eight or nine years old, I could run like the wind. I had a power-to-weight advantage that even superbikes might envy. Not so powerful, mind you, but a real pipsqueak, so when my legs got going, they didn’t have a lot of mass to propel. Unfortunately, I was also a bit of a wiseass, and I had the temerity to think I was funny. I’d see a couple of guys about six inches taller than me and 20 pounds heavier standing around the schoolyard, and I’d walk up to these guys, get right up close to them, and let off a fart of astonishing resonance. Then I’d say, “Hey, you guys stink!” And I would flee, laughing at first, but then screaming in terror as the truth of the matter struck home — guys with six inches on me always had that six inches right in their legs — and about four seconds later I was getting beaten silly.

Whether I deserved the beating or not, the game had some appeal. Whether it’s truly funny or not, playing a joke on the big kids is always fun, when you’re a pipsqueak. And so we come to the Ninja 300. Here, as CC intern James Nixon suggests, we have a case of a small bike pulling a prank on its 600 and 1,000 cc superiors. The 300’s rakish styling and confusing size suggest that it’s capable of running with the big kids. Though it is in fact a pipsqueak (an effect that is immediately apparent when you sit on the 300 after having ridden the Honda), it pretends through visual cues to be more than what it is. It proclaims to the observer that it might just be one hell of a sportbike.

We might hope that nobody’s going to take a Ninja 300 out to the A&W, throw a Pepsi into the face of someone on a Ninja 636, then ride madly away, fully expecting to outrace the other to safety. But the point is, the littlest Ninja hints that you should try that. It might be fun.

While some, Nixon apparently included, might rightly feel that this conceit of sporting ability is a false promise, a letdown even, others might find that it works. Riding in downtown Toronto on a hot day laden with traffic, I felt it. Squirting ahead of cars at a stoplight, slicing between traffic and parked cars (more slowly, of course), and flicking from one lane to another to catch a gap, I felt as if I was on any sportbike, and while I deployed a sensible level of caution, I felt a sense of eagerness, even aggression, and I enjoyed it more than I expected to, given that I was riding a little 300. At some point, the Ninja 300 stops feeling only like a small bike, and starts feeling potent.

It’s limited, of course, by that engine, but while 39 claimed horsepower and 296 cc are modest quantities, the little Ninja really does pull away from traffic at a stoplight with ease, and it winds out in first gear more eagerly than you might expect. But it’s not the engine, it’s the physical attitude of the thing that produces the emotional attitude: you sit on it with your feet up and back, your hands low, your face forward; it’s not exactly like a sportbike (thankfully, for any ride longer than 40 minutes), but it’s enough like a sportbike for a rider to feel some of what the guy on a 636 knows in his heart.

There is no pretence about the Honda CBR500R’s visual impression. To borrow a thing, it’s a WYSIWYG bike. It’s not un-handsome by any means, but it eschews the carnivore’s angles and flits of colour of the Kawasaki: it seems to promise only that it’s a Honda, as if that should be enough. And for some, it will be. The CBR’s pretense, however, is tactile, rather than visual. Get on it: notice that you’re able to stretch out, that your hands on the bar and your feet on the pegs feel connected to a motorcycle that isn’t defined by the term “small.” It doesn’t feel like a small bike; it feels like a bike, just a bike.

Its power output (Honda does not publish the figures) felt more than adequate on that fast-and-slow traffic-clogged highway into Toronto the day I picked up our test model. It was never thrilling, but there is plenty of torque available from that 471 cc engine, and it accelerated briskly in lower gears and steadfastly in higher gears, easily reaching illegal speeds without feeling tapped out.

Wheedling through downtown traffic aboard the Honda, I never did feel a quality of aggression, or boastfulness you might say, as I did on the Kawasaki. That’s okay: if the Ninja is a prankster, the Honda is a more mature article, the simple paint and clean lines are suave rather than boastful, and the roomy seating and unexpected torque impart a sense of mechanical confidence.

I don’t really know what it’s like to be suave and confident (perhaps that’s Nixon’s role), but the What You See Is What You Get appeal of the Honda should not be under-rated. The CBR500R is precisely what it claims to be in visual terms: quiet, smooth, and efficient. If its engine feels stronger than it is and if its accommodations feel larger than they are, that’s part of its tactile trickery. That, too, is a good thing.

This story was not meant to compare or contrast the two small bikes in the CC garage, but rather to consider them as individuals. I’m not going to pick a favourite, and to be honest, if I intended to buy one, I’m not sure which it would be. For me, it’s enough to know that each brings to the game the full measure of itself. They’re bikes, they don’t lie about themselves as much as most humans do, and the lies they do tell are good lies. The kind you’d tell to someone you like.