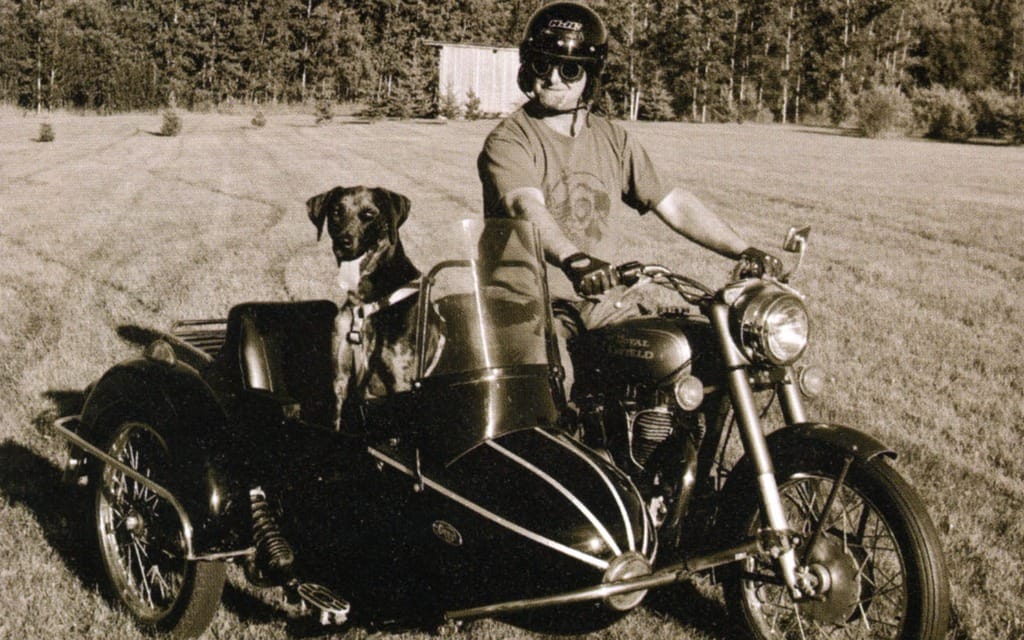 Young Me wouldn’t like to ride with Old Me. We both love riding, but we’re very different riders. For one thing, I’ve become way too uncool in my choice of riding gear. I used to wear a leather jacket, leather pants, and steel-toed work boots. My current look could be compared to that of a comic book villain. While riding in Central America a few years ago, my wife and I took a break in a small town. As we walked around in our futuristic outfits and helmets with tinted visors, my wife turned to me and said, “The kids are all staring at us.” “That’s because they think we’re from outer space,” I said.

I stopped caring about how cool I looked a bunch of years ago. Now my riding gear is chosen for comfort, utility, and durability—very unsexy. In the past I’d ridden in freezing rain for so long and become so cold that I couldn’t undo my helmet at the end of a ride. So cold that, while trying to warm up after another long wet ride in ineffective gear, I had to ease the shower’s hot water on gradually, as I was unable to gauge the temperature of the water for several minutes. That kind of thing doesn’t happen anymore.

As a young man I spent an incredible summer playing guitar in a rock band, touring dive bars all over Western Canada, travelling from gig to gig on my motorcycle. I would pack my guitars and amps into the truck after the show, then kill a couple of hours waiting for the sun to come up. At dawn I would set off for the next town, the crisp morning air sharpening my senses as I chased the ever-diminishing illumination of my headlight down the deserted highway. I vividly remember those sensations, and I still love to set out just before sunrise, but I’m not really into staying up all night anymore.

Nowadays I’m also a much more open-minded motorcycle enthusiast. I used to know of only two styles of bikes: dirt bikes and cruisers (today we call them cruisers, but back then we just called them motorcycles). When I was old enough to ride on the streets I sold my dirt bike and bought a cruiser, never even considering another style of bike. My idea of a rare motorcycle back then was an Indian Chief. The passing years have given me a greater appreciation for the myriad varieties of motorcycles, and I love them all.

These days, I hardly ever see a motorcycle I wouldn’t like to own, regardless of the name on the tank or what style it is. I don’t understand why someone would have a collection of bikes from the same manufacturer. It’s like eating steak every night. Sure, it’s good, but don’t you want to try some chicken, or maybe a pizza? I still have a soft spot for pre-1954 Indians, but I’d also have a Manx Norton and a Ducati 1199 Panigale in the garage of my dreams. They’d be right beside the Vincent Black Shadow and the Brough Superior.

Old Me is undeniably superior to Young Me in one aspect: I now have enough money to buy gas. I dreamed of epic rides in my youth, but was financially limited to my own province. As an adult I have touched two wheels to the four points of the North American cross: Victoria to St John’s, the Arctic Circle to the Panama Canal. I still love speed, but I’m not in as much of a hurry anymore. Though that’s not to say that 500 km is an all-day ride for me; once I’m on the bike and in the zone, I rarely stop for anything but fuel and a fast bite. I still love to ride fast, and I still love to ride all day, but I’ve stopped riding fast all day. I have learned that all-day rides are best done alone, and have accepted that speed—real speed—is a young man’s game. Though I’ve grown older, my passion for motorcycles has not aged. I love to ride. Always have and always will. At least Young Me and Old Me can agree on that.