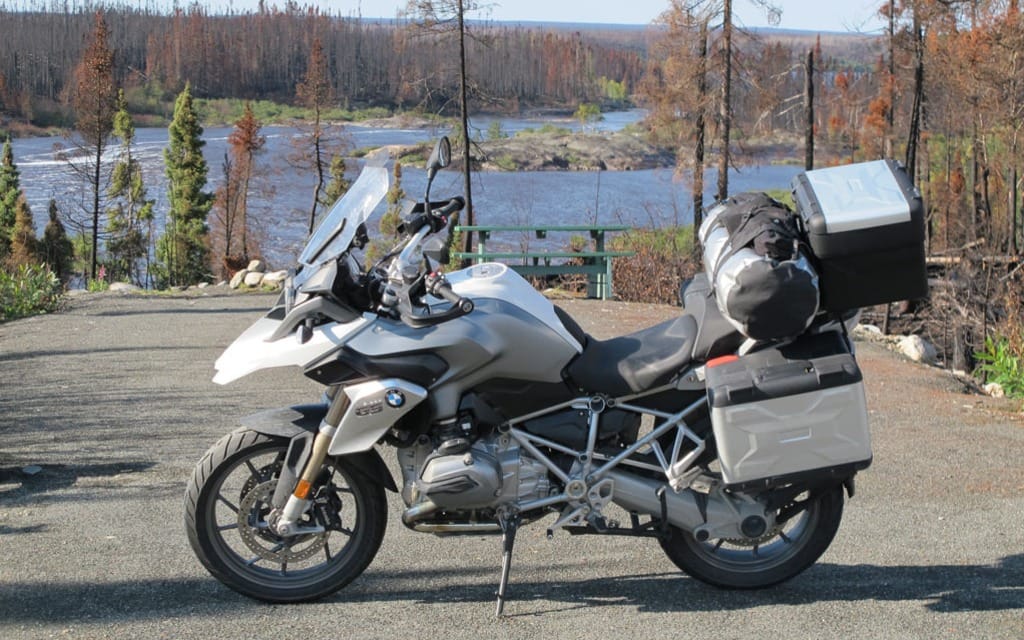 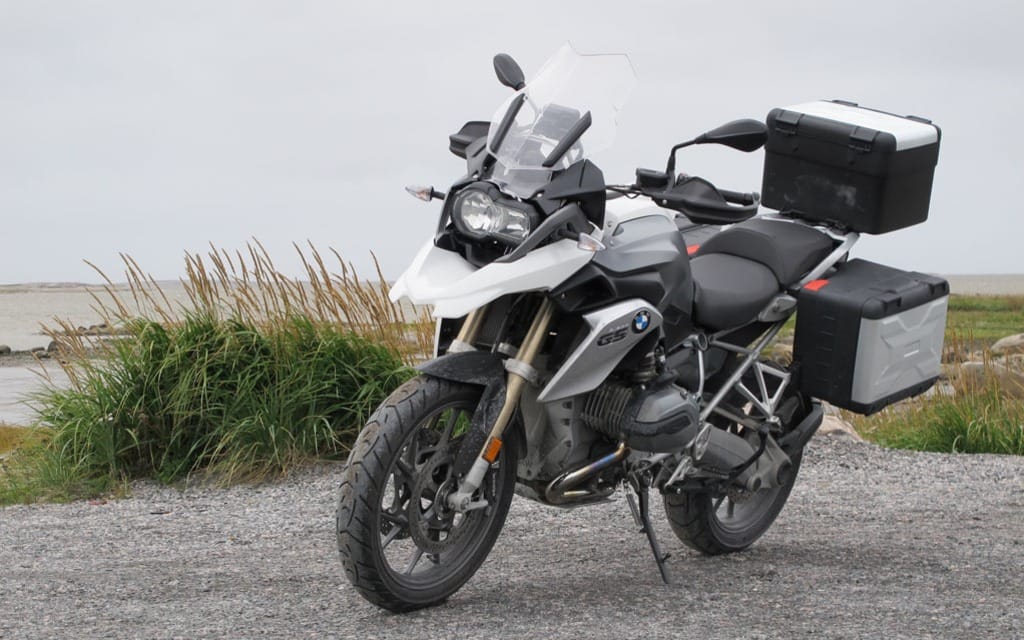 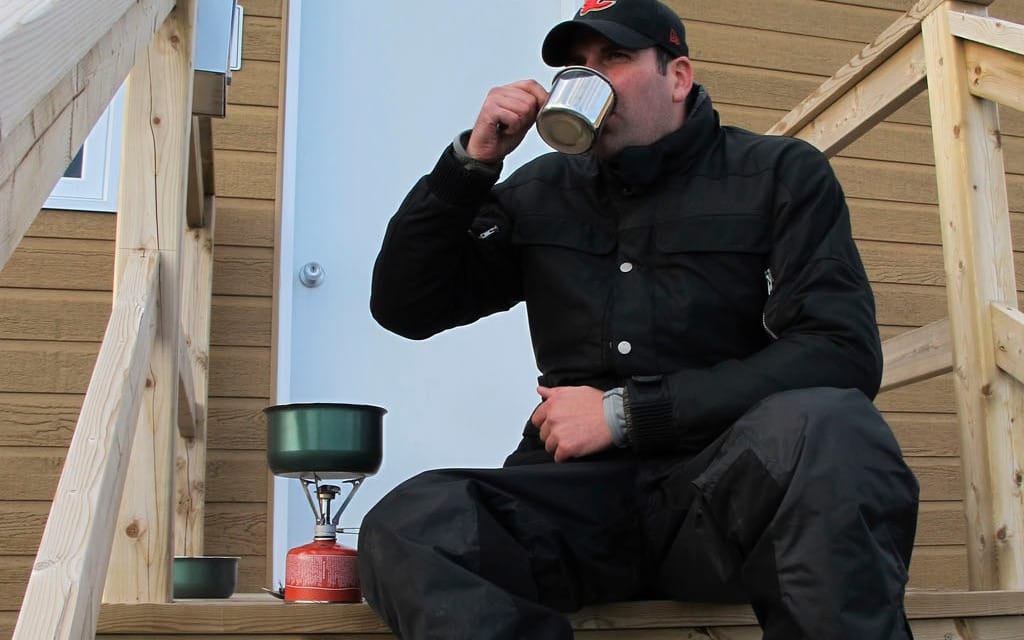 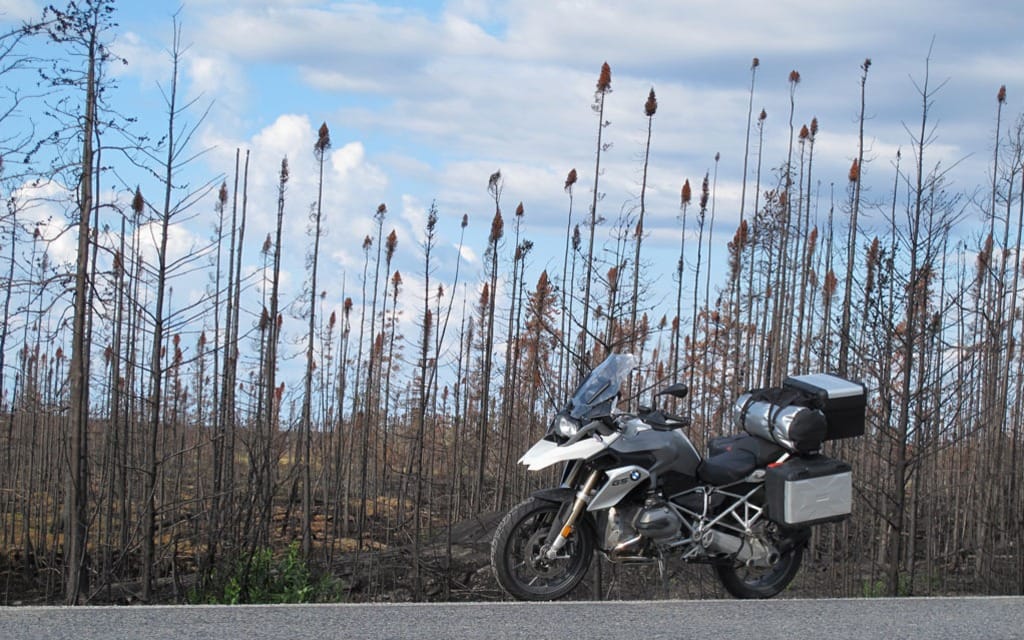 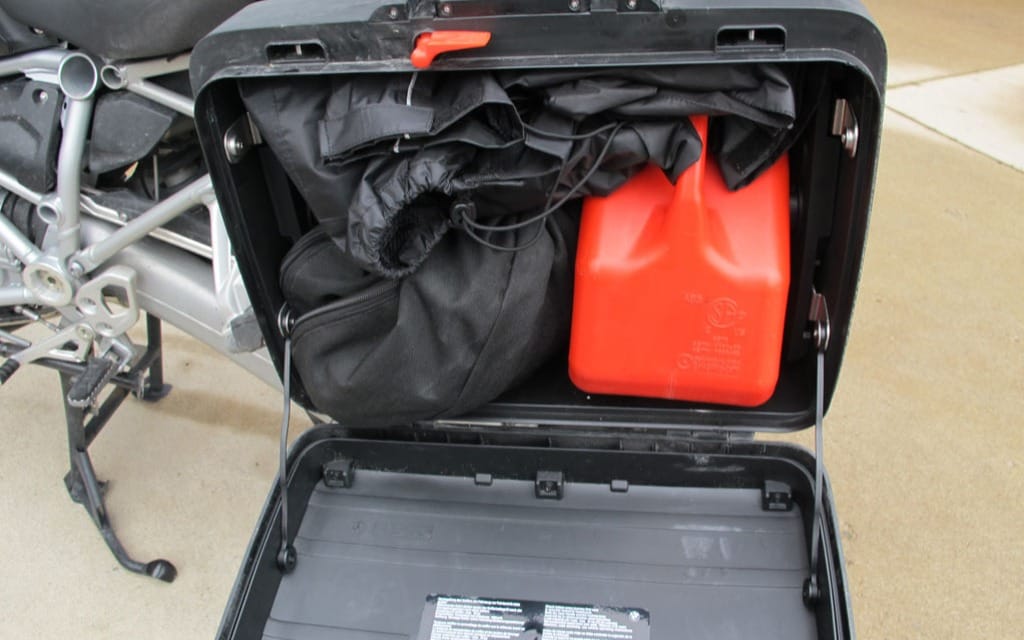 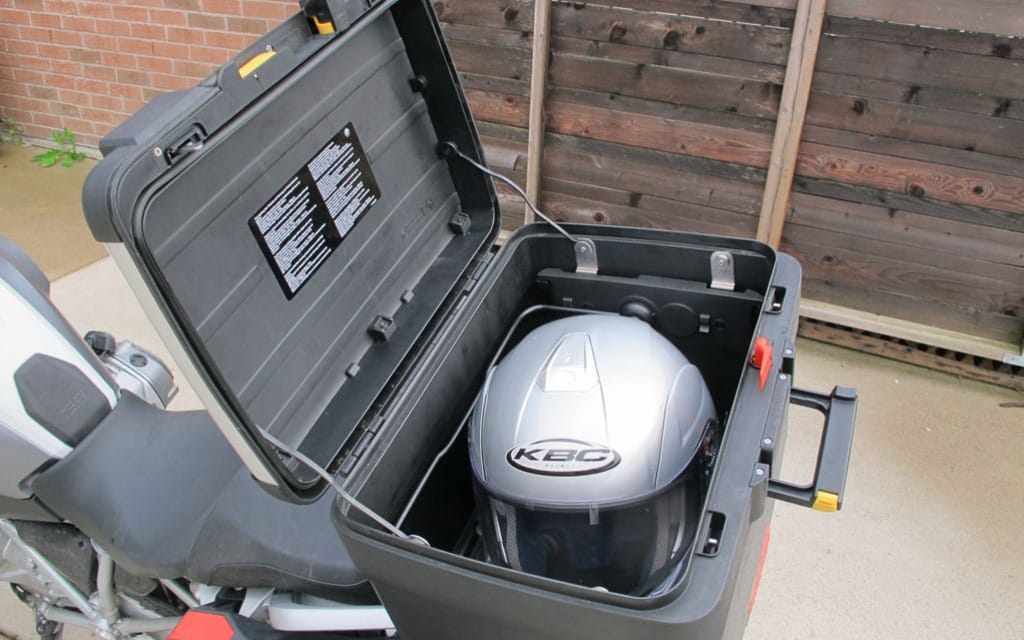 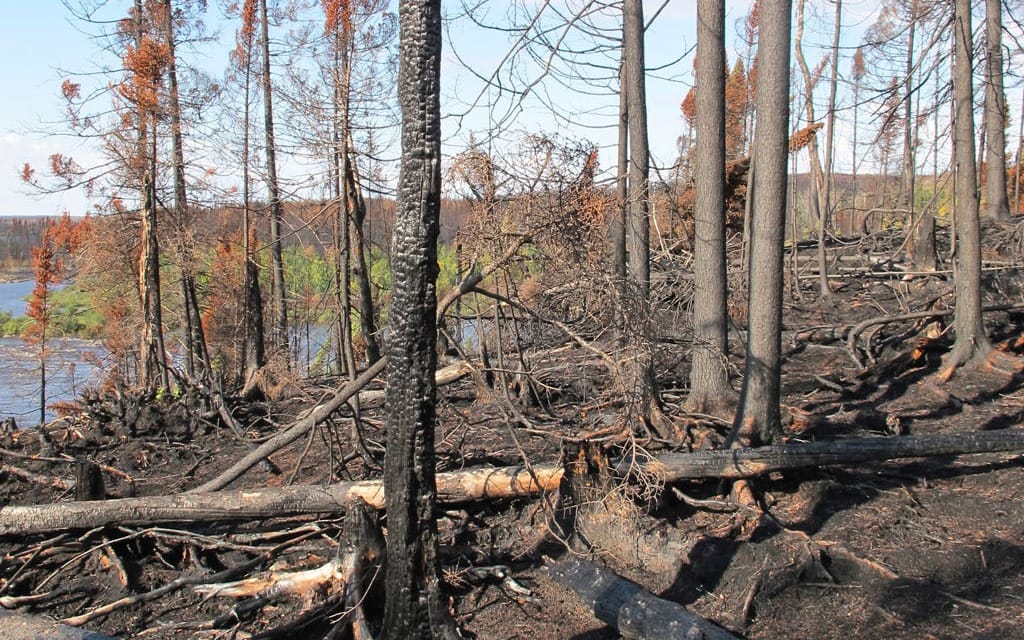 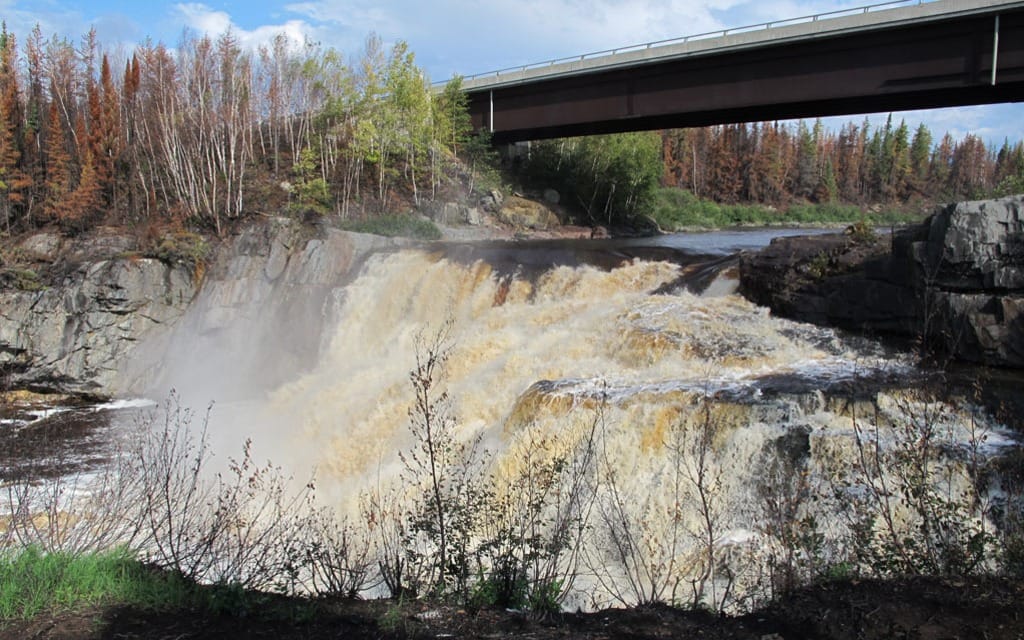 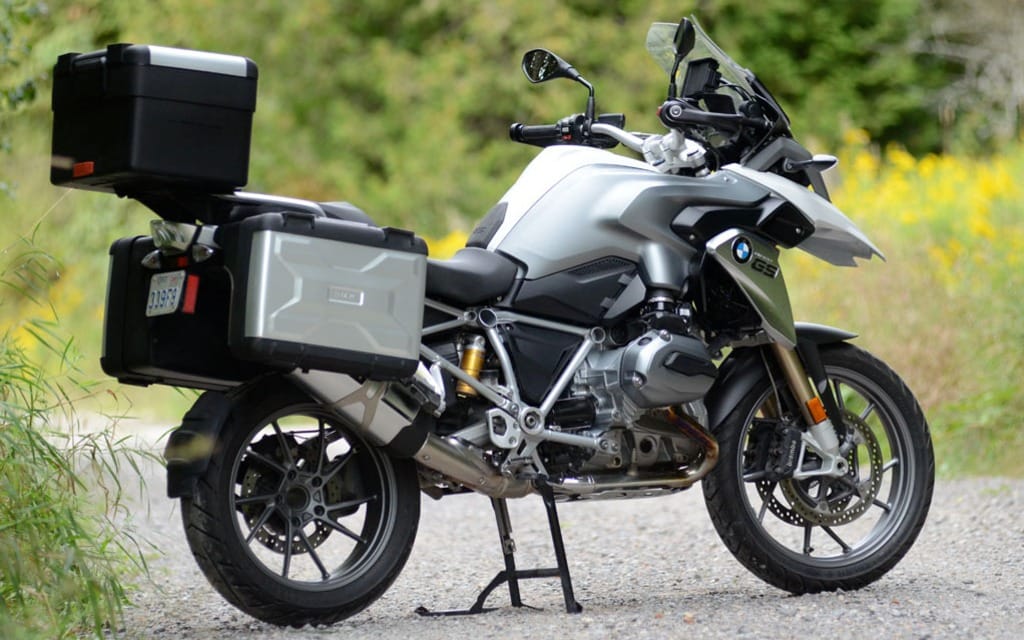 James Nixon returns to James Bay for 10 km of closure
Pulling the BMW R1200GS to the side of the gravel road, I say to myself, “This is it. This is where I turned back.” Past Chisasibi’s sole gas station and around the bend, not long after the road turns from pavement to rough gravel, I’d decided my road-going BMW R1150R Rockster couldn’t handle the conditions.

Or maybe I couldn’t. I was young and it was my first long-distance motorcycle trip. I was alone, and after several bone-jarring bottom-outs the fear of breaking down in remote northern Quebec got the better of me. Later, I checked Google Maps and saw I’d turned back only 10 km from James Bay. I’ve regretted it ever since, to have gone so far and come up just short.

I kill the engine and dismount, crouch beside the GS and run a thickly gloved hand over the gravel corrugations. The road ahead is strewn with sizeable potholes and gullies from recent rains, but I’ve ridden more than 1,600 km so I can close the 10 km gap. I won’t be turning back this time.

The James Bay Road begins at Matagami, Que., covering over 600 km before reaching the small community of Radisson, the most northerly point reachable by paved road in eastern Canada. The road is remote, with traffic so sparse that, at times, you can ride for hours without seeing anyone. There’s a 381 km service-free stretch—one of the longest in Canada—so it’s best to pack extra fuel. From Radisson it’s another 100 km west to the Cree community of Chisasibi, and a little farther to James Bay itself.

I leave Toronto on an early fall morning under overcast skies. It soon starts raining, forcing me to pull over and don the rain gear that becomes a nearly constant accoutrement for the entire trip. I head north to Barrie, then on to North Bay through intermittent showers. Though this is the new incarnation of BMW’s 1,170 cc Boxer engine, which incorporates liquid cooling into the air-cooled flat twin design, the smooth-revving powerplant’s ability to gobble up heaps of tarmac remains unchanged. After an initial growl at startup there’s still a hint of fluttery Boxer buzz at idle. But this GS has improved aural appeal, due in part to a redesigned exhaust (the muffler has moved to the right side) that grunts aggressively under acceleration. Continuing north after crossing into Quebec at Témiscaming, I give the GS’s six-speed gearbox a workout, tearing down straights and easily picking off traffic. Shifting is predictably BMW-like: solid, if not altogether slick. There’s plenty of torque in the low- to mid-range, and from 5,000 rpm to redline, where older GS models tend to plateau, this bike pulls harder. Cruising at 120 km/h in sixth gear, the engine ticks along smoothly at just over four grand. If you’re feeling lazy, don’t bother downshifting to pass; rolling on the throttle in top gear will provide a powerful surge. Overall, it’s an incredibly compliant engine. You can thrash it or lug it; the R1200GS will just go.

Light rain continues through Ville-Marie and Notre-Dame-du-Nord, while a quick glance at the instrument cluster shows the temperature dropping to the mid-teens. A large LCD screen shows a wealth of easily navigable information, flanked by an analogue speedo and matching tach. Our test bike comes with BMW’s “Dynamic” accessory package, which includes Enduro ASC, Dynamic ESA, LED headlight and GPS prepping (mount and wiring) all for the suitably steep price of $2,300. That doesn’t include a GPS unit though, so I borrow a Garmin Zumo that fits in the lockable mount. Our GS also comes with handguards and luggage brackets as part of the “Comfort” package ($675), and is fit with Vario panniers ($1,055.26, plus $70.74 for locksets) and top case ($500.31, plus $35.37 for lockset). Although the R1200GS has a base MSRP of $19,200, the costs of kitting one out quickly add up. Still, those expandable panniers are sturdy, easy to operate and hold a lot of gear, and a GS without handguards looks slightly indecent. The guards keep the rain off my gloves, while standard heated grips keep the chill out. An on-the-fly adjustable windshield provides good protection from the elements as well. With it set at its highest position, I experience no buffeting and minimal wind noise.

There’s a strange, almost perverse pleasure in riding through inclement weather (if properly attired). To be exposed to wind and rain, while at the same time warmly cocooned and eating up kilometers, is oddly rewarding. Still, my enjoyment of insistent rain has its limits, and by Rouyn-Noranda I’ve had enough.

In the morning the temperature is in single digits. Despite the chill, I’m sweating as I manoeuvre the Beemer out of its parking space. There’s no denying the R1200GS is heavy; with a wet weight of 238 kg, plus a full load of luggage, it’s no wonder I’m perspiring. But it’s amazing how well the GS carries that weight. When underway it displays nimbleness and agility that belie its size. Also, it’s a tall bike, which is either a curse or a godsend, depending on the rider. The stock seat is adjustable to two heights (850/870 mm). I find the lower height slightly restrictive through the legs, while the higher setting is more accommodating and still allows me to flat foot when stopped. The GS’s supple yet supportive seat, coupled with an upright, ergonomic seating position, allow you to cover large distances in comfort. All-around, the R1200GS is the most comfortable bike I’ve ridden. Leaving Rouyn-Noranda, I head east on Highway 117 and turn north at Rivière-Héva, following 109 as it meanders towards Matagami.

After refueling in Matagami, I continue north on the James Bay Road. A brief burst of sunshine has disappeared and big, heavy raindrops are falling. I ensure traction control (ASC) and riding mode are both set to “rain,” easily done using the LCD screen and buttons on the handlebar. In addition to rain, which has the softest throttle response, the R1200GS has three other riding modes: road, dynamic, and enduro. The weather is so poor I stick mostly to rain mode, although, thanks to some brief stretches of dry pavement, I can attest to the enhanced aggression of the GS’s “dynamic” setting. Riding modes can be changed at speed by selecting the desired mode, then engaging the clutch and fully closing the throttle.

Admittedly, the James Bay Road is not overly stimulating. There are no tight turns or hairpins, and elevation changes occur so gradually you might miss them. When you do crest a rise that isn’t walled in by vegetation you’ll see ranks of trees marching to the horizon, a landscape dotted with lakes connected by snaking rivers. Long, arrow-straight sections of pavement are connected by gently curving sweepers; it’s an easy road to speed on. The surface, however, is far from smooth, though the supple suspension on the R1200GS (Telelever front end with 190 mm of travel, Paralever rear with 200 mm) absorbs uneven pavement with aplomb. The Dynamic ESA (Electronic Suspension Adjustment) works in conjunction with the bike’s other systems, linking some of the ESA’s basic settings with ABS and ASC. In addition, ESA can also be fine-tuned for both damping (soft, normal, and hard settings) and preload (solo, solo with luggage, and two-up). The GS feels planted and smooth, the suspension providing reassuring feedback and responsiveness that’s astonishing for a motorcycle of its dimensions, even at high speed. In the hands of the right rider, an R1200GS could keep up with almost anything.

I’m not that rider, and I’m conserving fuel anyway, so I set the cruise control (a $400 option) and settle into a modest pace. The rain remains intermittent with only brief breaks in cloud cover, and every time I glance at the temperature gauge it seems to have dropped a degree. I stop after 257 km at the Rupert River waterfall, partly to top up the tank with the jerry can, partly for respite from the incessantly cold wind. I remount and continue, hunkering down behind the windshield. Rounding a bend near Mirabelli Lake, I see a dog in the distance. As I get closer I’m wondering why there’s a dog on the road in the middle of nowhere when it turns its massive head and glances back at me. “Holy shit,” I say aloud, “it’s a fucking bear.” My initial reaction is to get on the brakes hard. Brembo four-piston radial calipers clamp down on dual 305 mm discs up front; there’s a two-piston caliper and 276 mm disc at the rear. In my surprise I’m overzealous, causing the ABS (which comes standard) to kick in, though it’s solid and predictable, slowing the bike with control. I continue at a crawl, well back of the bear. After crossing a bridge, it gives me a cursory glance before ambling into the trees.

I had planned on camping, but change my mind when I notice a snowflake icon flashing on the GS’s screen. It’s two degrees Celsius. I wipe moisture off the screen to make sure I’m reading it correctly—yup, two degrees Celsius. I reach the rest and refuelling area, take a spartan room and have a scalding shower, savouring the slow return of warmth to my extremities.

The next day is just as cold and dreary, though my spirits are buoyed by the proximity of my goal and the solidity of the GS. I reach Radisson by midday, check into a motel and then refuel the bike. I do some backtracking to reach the Chisasibi turnoff, then head west for 85 km and find the spot where I turned back five years before. The road has transitioned to gravel, and Metzeler Tourance Next tires (120/70-19 front, 170/60-17 rear), while biased towards pavement, provide decent grip in light gravel. The rain has stopped, and after reminiscing briefly I set off with renewed enthusiasm, grabbing a fistful of throttle to send up a celebratory rooster tail. But the engine starts chugging, the bike lurching abruptly. I’m thinking, shit, I’ve broken something. But the answer is staring me in the face; the traction control is in the most sensitive rain setting After switching the ASC to enduro I have no more issues, the system allowing an appropriate amount of rear-wheel slippage.

I’m up on the pegs avoiding potholes and gullies, the bike floating smoothly over the gravel road’s corrugated surface. At every rise I strain to see beyond the dense taiga forest enveloping the road, at every bend I expect an expansive view to open up before me. I smell it before I see it; a salty tang on the cold breeze telling me the bay is close. My knees tighten their grip on the tank as I reach up and open my visor to breath the smell in. I see it to my left, then directly ahead as the road turns towards the water and ends in an oblong parking area with smaller tracks leading down to the shore. Freighter canoes are beached above the high tide line, but there’s no one else here. I turn off the ignition and allow the silence to fill my ears. The only sounds are the crunch of my boots on the stony strand, the wind whistling in off the water, and the fitful rustling of waves stroking the shore. It’s not always breathtaking to ride through, but if you stop, look and listen, that’s when this landscape speaks.

Closing the gap to James Bay is the longest 10 km I’ve ever ridden, and I couldn’t have chosen a better bike to do it on than the R1200GS. The wind picks up as I remount, and I hear the faint, familiar tapping of raindrops on my helmet. Only 1,600 km left to go.