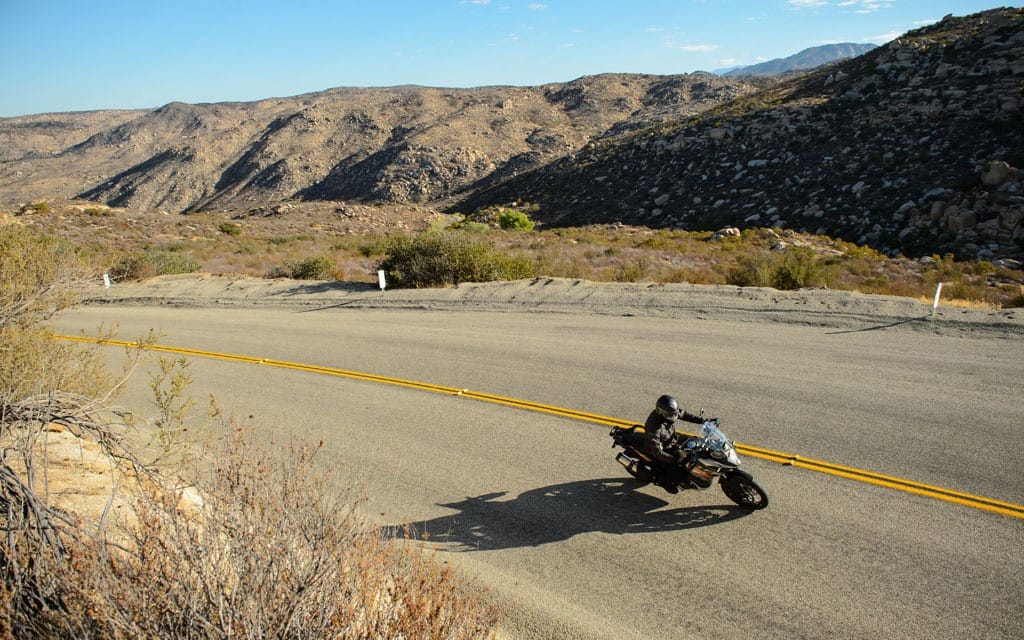 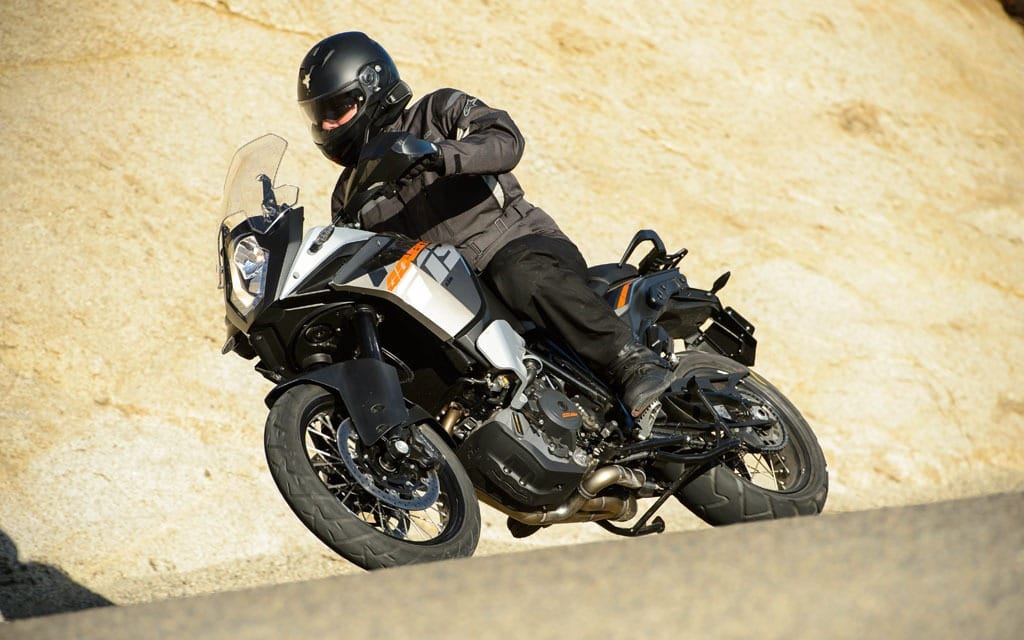 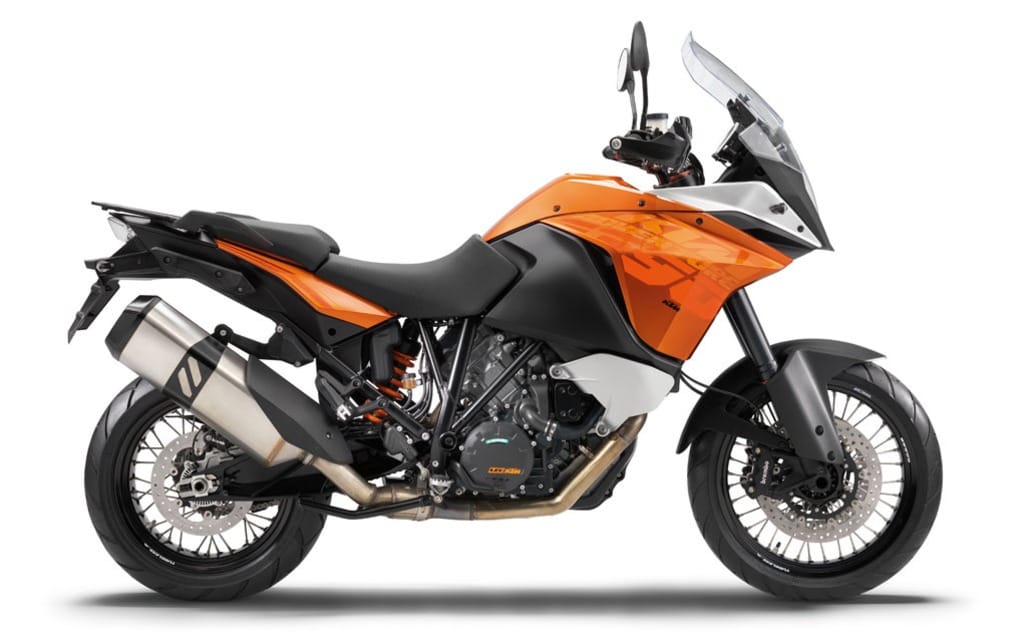 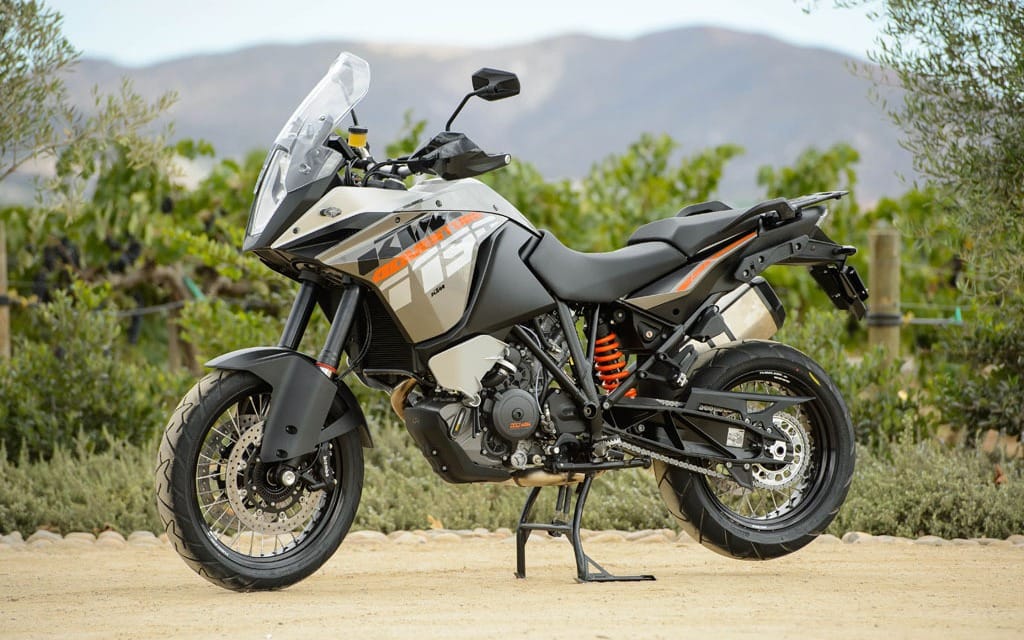 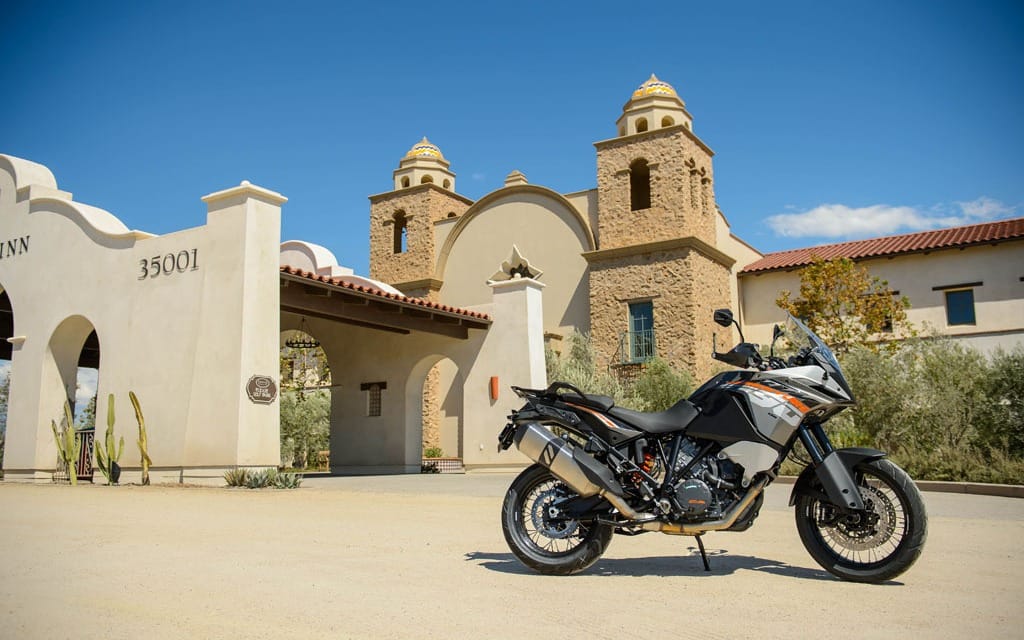 Adventure. And then some

By James Nixon
Our KTM handlers have righted the bike and rolled it from the road, leaving me seated on the guardrail. My hands are slightly unsteady as I examine the burn marks on the right leg of my riding pants. That’s where my calf came to rest on the exhaust pipe of the 1190 Adventure when it finally keeled over. Otherwise I’m unscathed—unless you count my injured pride. I look back through the corner trying to figure out where I went wrong. “You all right?” The voice is unfamiliar and stern, the tone more contempt than concern. I look up into the face of a California Highway Patrol officer who has stopped in the road. I hesitate. He leans from the SUV’s open window, brow furrowing, head tilting down to better examine me over the rim of his aviator sunglasses. “I’m fine,” I say. He checks his rearview mirror and sees a car approaching. Putting the SUV back in drive, he turns to me with a look that, until now, I’ve only ever received from ex-girlfriends. “Then get the hell off of that guardrail.”

It’s my first motorcycle crash. In over 10 years of street riding there have been close calls, sometimes from my own negligence, sometimes from the negligence of others. But I’ve never put plastic to pavement until now.

The departure point for KTM’s North American launch of the 1190 Adventure is the Ponte Vineyard Inn, near Temecula, California. The test bikes are finished in smoky grey paint, although the 1190 Adventure also comes—naturally—in orange. Climbing aboard, the adjustable split seat feels firm yet comfortable, an initial impression confirmed by a day in the saddle. At over six feet, I spend most of the day with the seat in the high position (875 mm), though a stint with the seat in its low setting (860 mm) doesn’t overly crimp my legs. The windshield is also adjustable, but not on the fly, as it requires two hands to operate the simple levers. The screen remains below my line of sight even in its highest position, while wind noise and buffeting are minimal.

A white-on-black analogue tach is flanked by two clearly legible LCD screens. The right screen displays road speed, time of day, current gear, ride mode, fuel level and coolant temperature. A wealth of additional information is accessed on the left screen by scrolling through up to 14 menu pages. Though it sounds overwhelming, KTM has made navigating the bike’s electronics quick and intuitive via a thumb pad on the left switchblock. Within minutes of learning the system I’m switching between riding modes and adjusting the suspension. The system also features a programmable favourites page.

Street and Sport riding modes deliver full power (a claimed 150 hp), while selecting Rain or Off-Road cuts output to 100 hp and the power is delivered more gradually. The 1190 Adventure also has adjustable traction control with four settings. Street is the most invasive, Sport allows some rear-wheel spin, Off-Road permits freer slippage and selecting Off disables it entirely.

This is a big, tall motorcycle. But with a claimed dry weight of 212 kg, the 1190 Adventure is surprisingly light given its girth. From the saddle the bike seems smaller than it is, due to a remarkably narrow midsection. Initially, it feels more like an 800 than a full-blown litre-plus bike, though that feeling disappears as soon as I twist the throttle.

Our riding pace is sedate at first, with the opening stretch into the mountains made more enjoyable by the 1190 Adventure’s sensible upright seating position in which the hands fall readily to the handgrips. The clutch pull is light, the fuelling is exceptionally crisp, and the six-speed gearbox a delight. At cruising speeds the exhaust note is restrained, though cranking the throttle results in a ferocious growl.

The 1190 Adventure has an 1,195 cc liquid-cooled 75-degree V-twin that’s based on the RC8 superbike engine. (When KTM describes the Adventure as having a “supersport-level engine package” they’re not entirely blowing smoke.) Unsurprisingly, in the transition from superbike to adventure-touring bike engine, it’s been retuned for better midrange torque. Power is impressive from 3,000 to 6,000 rpm, but the fun really begins above 7,000. As the elevation increases so does our pace through the quickening curves leading into San Bernardino National Forest. Though entirely capable of smooth highway cruising, the 1190 Adventure’s LC8 engine encourages aggression.

We head east on the Pines to Palms Highway along smooth, winding asphalt through desert scrub. The Adventure’s suspension is by house-brand WP, and KTM’s Electronic Damping System (EDS), which lets the rider adjust suspension via a mode switch and features four settings to compensate for load, is standard. EDS also allows selection between three damper settings (Comfort, Street and Sport). Compliant suspension coupled with a light-yet-rigid steel trellis frame result in a motorcycle that handles exceptionally well. Turn-in is quick and light, and the bike can maintain aggressive lines through corners with ease. Ride it hard enough and you just might forget you’re on an adventure tourer.

Given the 1190 Adventure’s addictively aggressive personality, it’s reassuring to know there’s generous stopping capability, with a ferociously good braking setup by Brembo. Dual 320 mm rotors with four-piston calipers do most of the work while a single 268 mm rotor with two-piston caliper trails along at the rear. If you miscalculate your modulation, ABS (standard) has your back. The braking system is combined: engaging the front brake in Street mode adds a touch of rear brake to maintain stability. In Off-Road mode the front brake is allowed a degree of slippage, the link between front and rear is severed, and the rear does without ABS altogether. Switching between Street and Off-Road can be done on the fly, so there’s no need to completely stop and disengage ABS when transitioning from pavement to gravel. It’s an ingenious setup, one that should appeal to the majority of adventure-touring riders who spend most of their time on pavement but who reserve the right to get filthy on occasion.

A big part of the 1190 Adventure’s sharp-steering sportbike feel can be attributed to KTM’s switch from the off-road-oriented 21-inch front, 18-inch rear wheel combination of the outgoing 990 Adventure models to a 19-inch front, 17-inch rear combination. Grippy Continental TrailAttack 2 tires do their part as well (120/70 front, 170/60 rear) though if you intend more than an occasional foray through gravel you’ll want knobbier rubber. And if you think KTM has blasphemed the Adventure name by unashamedly aiming for the street segment, relax. The R version (which at $18,399 is slightly more than our test bike’s $17,999) has 21-inch front and 18-inch rear wheels just like the old bike, in addition to longer suspenion travel than the base 1190 Adventure. But what the R version gives up is just as significant, as it doesn’t come with electronic suspension. You can’t even add it as an option. It’s as if KTM is encouraging us to stick to the pavement with the base model.

KTM’s Adventure has been dirt-biased in the past and has developed a hardcore off-road following—not surprising, given KTM’s utter domination of the Dakar Rally for over a decade. But with he 1190 Adventure the focus shifts to the street, and the bike looks and feels dramatically different than its predecessor. “Expanding in the street market is critical for us,” says Florian Burguet, KTM Canada’s managing director, who admits that the Adventure—surrounded as it is in the showroom by motocross and enduro bikes—is an anomaly for the Austrian manufacturer.

There’s no denying the new 1190 Adventure looks drastically different than the iconic Adventure of old. Although some welcome the change, there are purists who decry the design overhaul. Despite the changes, the 1190 Adventure is still visually distinct in the segment—though admittedly not as distinct as before. Consider the trend in adventure-touring models to a front-end duckbill, a feature now nearly ubiquitous in the class. Suzuki added one to its new V-Strom, but KTM didn’t to the Adventure. And even if you think the 1190 Adventure looks banal, the ride is anything but. Which is what gets me in trouble.

As we head west on Highway 74, we’re told photography sessions are over and that we can either turn right to a mid-afternoon lunch stop or continue on through a particularly snaky section of tarmac. I opt for the latter. Call it youthful exuberance or something less charitable—either way, it doesn’t take long for me to overcook a corner. I’m not uncomfortable with the pace or unsure on the bike, I simply misjudge the bend, coming in too fast for the decreasing radius turn. I heel it over but then make a major mistake—I cast my eyes from where I want to go to where I don’t want to go. Stealing a glance at the guardrail I have an instant of panic and cause the bike to hiccup and headshake. The bike lowsides and gains a few scratches while I’m left with a bruised ego.

Press launch bikes are 2013 European specification machines, but KTM is adding a Motorcycle Stability Control (MSC) system to 2014 Canadian models (which should be in dealerships now). KTM, in conjunction with Bosch,  is so confident in the system that it’s calling the 1190 Adventure “the world’s safest motorcycle.” The idea is simple yet improbable: ABS that’s effective while cornering. MSC works in conjunction with the bike’s ABS and traction control systems, and KTM says it can prevent wheels from slipping while braking leaned over, while at the same time minimizing a bike’s tendency to stand up and run wide. If it works as well as KTM says—initial reports from overseas claim that it does—it could prevent crashes and save lives. It’s just a shame it wasn’t fitted to the bikes we’re riding. But even though I’m shaken by the crash, I throw a leg back over the horse and am soon back to speed. The KTM 1190 Adventure: it’s that reasuring a motorcycle.