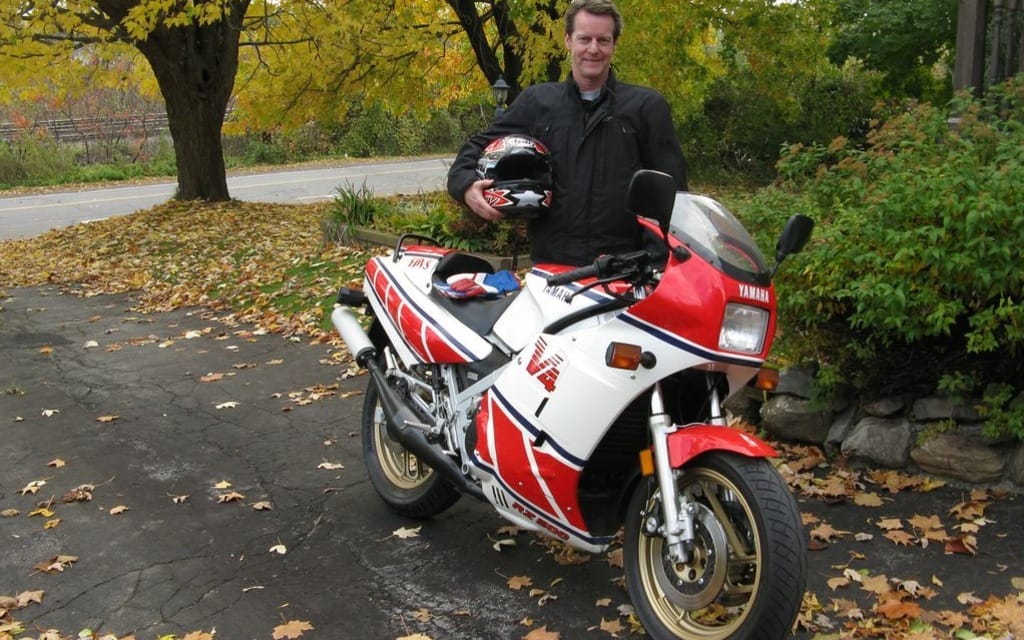 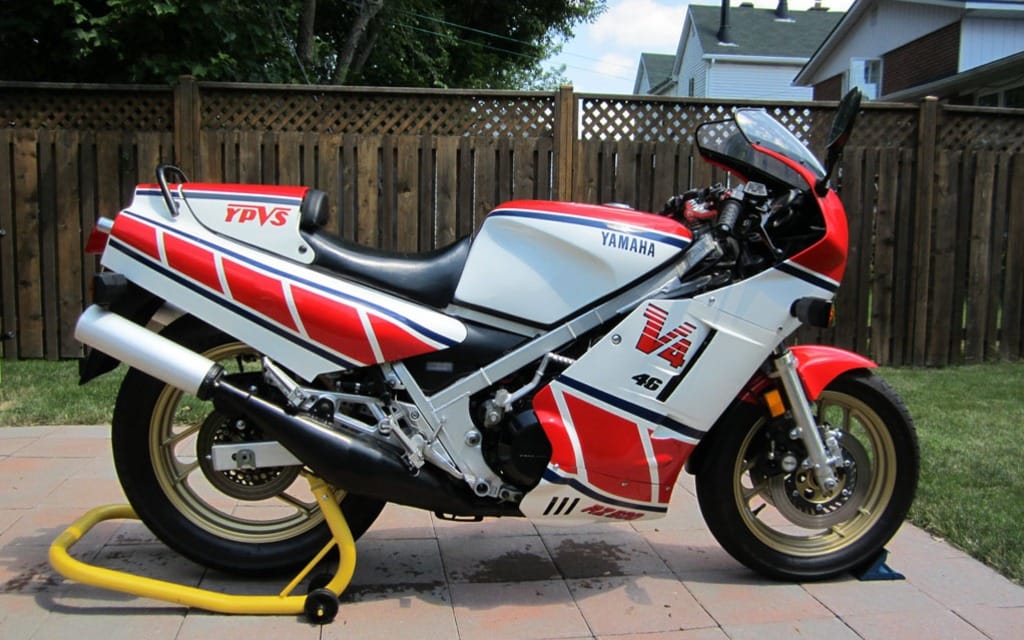 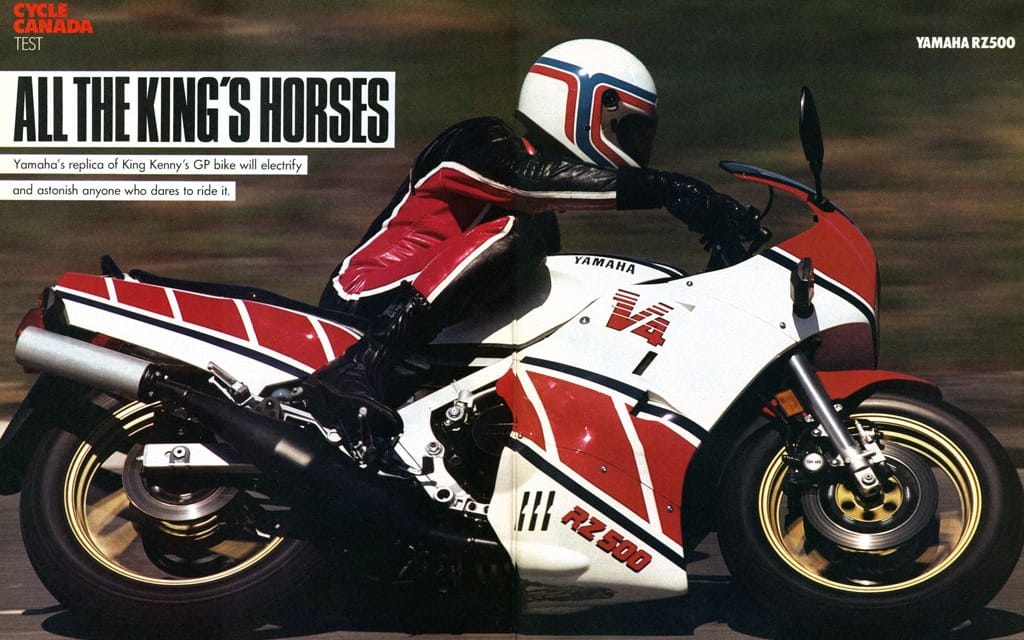 In 1984, Yamaha introduced a 500 cc V4-powered motorcycle based on the Grand Prix race bike that Kenny Roberts won six races on in a year-long battle with the upstart Freddie Spencer. In order to do justice to their rider and their race bike, the new street model would have to be special, and if you read the August 1984 issue of Cycle Canada, you understood that Hamamatsu had not only hit the mark, but blown it clear off the target.

“The RZ500,” began the magazine’s test report, “is the most outrageous street bike ever.” In case you think “outrageous” is just a euphemism for big-city politics and gay pride parades, here’s how they wrapped up the piece: “In the possession of an experienced and cautious rider the RZ500 is the most competent and thrilling production street motorcycle available in Canada. If  you’re capable of getting a grip on the explosion, be ready to hang on for a ride that you won’t believe.” Come to think of it, that last part does sound like a gay pride parade, but Mr. Sellors’s ’85 RZ500 is, in fact, a regular motorcycle that can be trolled down the street without causing innocents to swoon. Or maybe not.

WHY ONLY 11,000 KILOMETRES?
I bought it in ’85 and drove it for a couple of summers, but I bought an MR2 in the spring of ’87 and I had a girlfriend, so all of a sudden the bike became less of a prime mode of transport. I drove it sparingly for three or four summers, then in 1990 I was driving it so little I didn’t licence it. It was in my garden shed for 15 or 16 years and then I put it back on the road about three years ago. I pulled one of the expansion chambers off, looked inside with a flashlight, and it was clean as a whistle. So I did the old carb rebuild kit, and it’s never run better.

IT’S A KICKSTART-ONLY MODEL.
Yeah. In the spring it might take me 10 or 15 kicks to get it all primed, but in midsummer it’ll probably start first or second kick.

HOW FAST HAVE YOU GONE ON IT?
That first summer I had it up to 230 or 235 klicks. I was tucked under the windscreen and it scared the crap out of me. I was racing a buddy on a GS1100, and we were both flat out. I don’t have the balls for that anymore. I had it 195 on one of the back roads into Air Canada one morning.

HOW DID IT DO AGAINST THE GS?
Up to close to a hundred we were pretty much neck and neck.

DOES IT GET ATTENTION ON THE ROAD?
Yeah. I was down in Vermont with my brother-in-law on Labour Day, and everywhere we stopped guys were coming out to see it. One guy pulled his car around in a U-turn and came back and insisted that we pull over so he could look at it.

IS IT COMFORTABLE?
It’s horrible. The clip-ons are mounted on the top of the fork tubes, so it’s a little better, but the seat has no padding.

HOW FAR AWAY FROM HOME HAVE YOU RIDDEN IT?
The farthest was last summer down to Battleboro, right to southern Vermont.

WAS YOUR ASS SORE AT THE END OF THE DAY?
Yeah, but you get used to it after the second day, and two-strokes suck fuel, so you ride for two hours and you have to get off anyway.

HOW IS ITS HANDLING?
At the time it was okay. I’ve put some thicker oil in the forks, which has helped, but judged by today’s sportbike standards, it’s horrible. But it’s all relative. At the time it was a good handling bike. There’s no wobbles, I don’t get any head shake. But the fork damping is weak. You wouldn’t push that bike like you’d push an R6.

HAVE YOU MODIFIED IT?
Nope. I never opened up the motor. It’s all stock, still got the original chain. I replaced the original Yokohama tires with BT45 Battlax tires when I pulled it out of the shed. I did put on a bump seat [rear seat cowling], an aftermarket one. Some guy in Montreal was making them about 10 years ago, and he did a beautiful job duplicating the original one. That’s the only part that’s not original.

WHAT DO YOU THINK OF ITS LOOKS?
I love it. Always did. The Yamaha speed bars are a classic look, and I’m lucky that mine has it. I think it still looks great, and it still turns heads.

WHAT CONDITION ARE THE PAINT AND CHROME IN?
Pretty much perfect. It’s never been dropped. There’s a little bit of, I wouldn’t say ‘pitting,’ on the expansion chambers, and I wouldn’t say it’s showroom, but it’s close.

DOES IT SMELL LIKE A TWO-STROKE?
Yeah, I’m running Motul in it now, and it’s not cheap, but they say it smokes less. I’ve noticed it smoking a little less. That first start-up in the spring, it’s just an absolute plasma cloud, though.

WHY HAVE YOU KEPT IT FOR ALMOST 30 YEARS?
I still love the bike, it still puts a smile on my face. Plus, I’ve always loved two-strokes. After all this time, it still pulls like a train above 6,000 rpm. That’s the biggest rush, the sheer power from a 500 cc motorcycle. Right up to 10,500 it pulls like a mule. At low rpms it’s civilized, but it’s completely driveable.

BACK PAGES
The RZ is manageable almost to the point of docility when kept off the pipe. But to allow it to rev unharnessed through the gears is to experience sensations of exhilaration — or anxiety — unavailable with any other production street motorcycle. This bike accelerates so hard with such smoothness and handles so well that a rider can very quickly find himself travelling at race-track rates without benefit of a race track.

Power is adequate below 4,000 rpm in the first three gears, and things start to get exciting between 4,000 and 7,000. At 7,000 through to just under the 10,000 redline the acceleration is outrageously strong. The pull of this little 500 in low and middle gears while in the peak powerband is stunning, even when you’ve just hopped off an FJ1100 or GS1150.