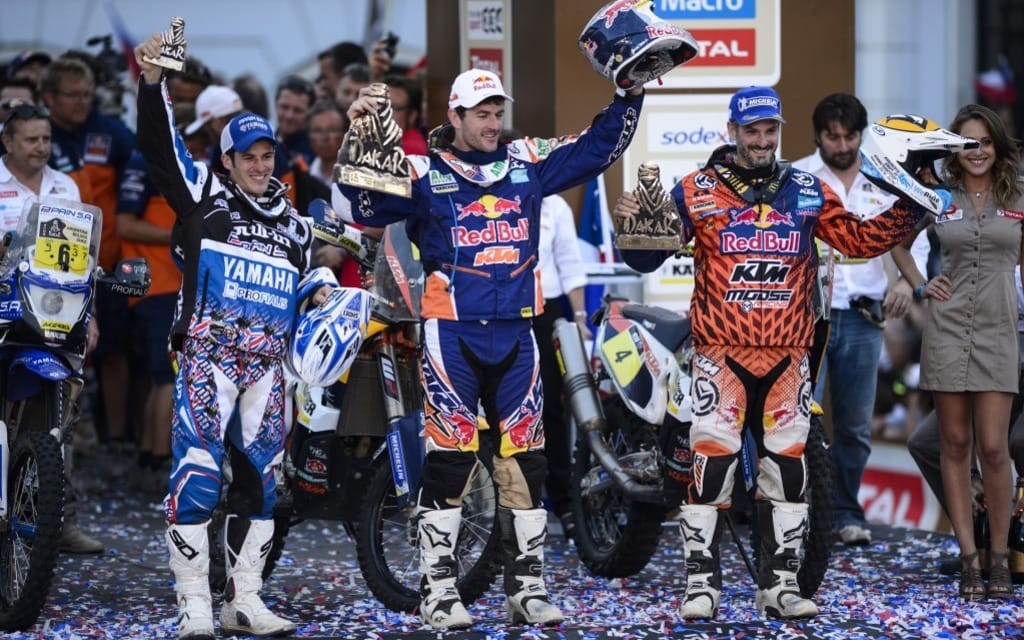 Another title for KTM; heartbreak for Honda

Marc Coma won the 2014 Dakar Rally on the weekend. Though the Spaniard’s victory was something of a forgone conclusion, the battle for second and third overall came down to the final stage of the rally.

Stage 12 took place last Friday between El Salvador and La Serena, including a 350 km timed section. It was another day featuring sand, with nearly 150 km of dunes to close the special. Yamaha rider Cyril Despres finished first on the day, followed not far behind by KTM’s Coma. Despres’ Yamaha teammate and fellow Frenchman Olivier Pain finished third. The biggest story of the stage, however, was the disastrous day for Joan Barreda Bort. The Honda rider was second in the overall rankings going into the stage, but suffered serious mechanical problems and actually had to push his bike over the finish line. He finished the day in 68th and dropped to seventh overall, ending Honda’s hopes of a podium finish in 2014.

The 13th and final stage of the rally went on Saturday from La Serena through cacti covered hills to Valparaíso. There was some redemption for Joan Barreda Bort as he was fastest through the 157 km special, though the stage win would not elevate him in the overall rankings. Olivier Pain took second place on the stage, and Portugal’s Helder Rodrigues was third. Cyril Despres ended the day in fifth. The Yamaha rider had to claw his way back into contention after a poor start to the rally, ending up fourth in the general rankings. Marc Coma’s overall victory was assured, so the final stage was a bit of a victory lap as he coasted across the line in 18th place.

KTM will be happy with the results of this year’s rally as the Austrian manufacturer claimed the top two spots on the podium. Marc Coma finished first overall, his fourth Dakar victory and KTM’s 13th successive title. Coma’s teammate and fellow Spaniard Jordi Viladoms was second, while Yamaha rider Olivier Pain finished third.

“Without the right people behind me it would have been impossible to win,” Coma said. “We have worked very well throughout the race and also before. Last year I went through a very difficult situation not being able to compete because of injury and I came back to win the race. I think this says a lot about the people I have around me. I am very proud of this victory. What was key to winning the Dakar was not to make any mistakes.”