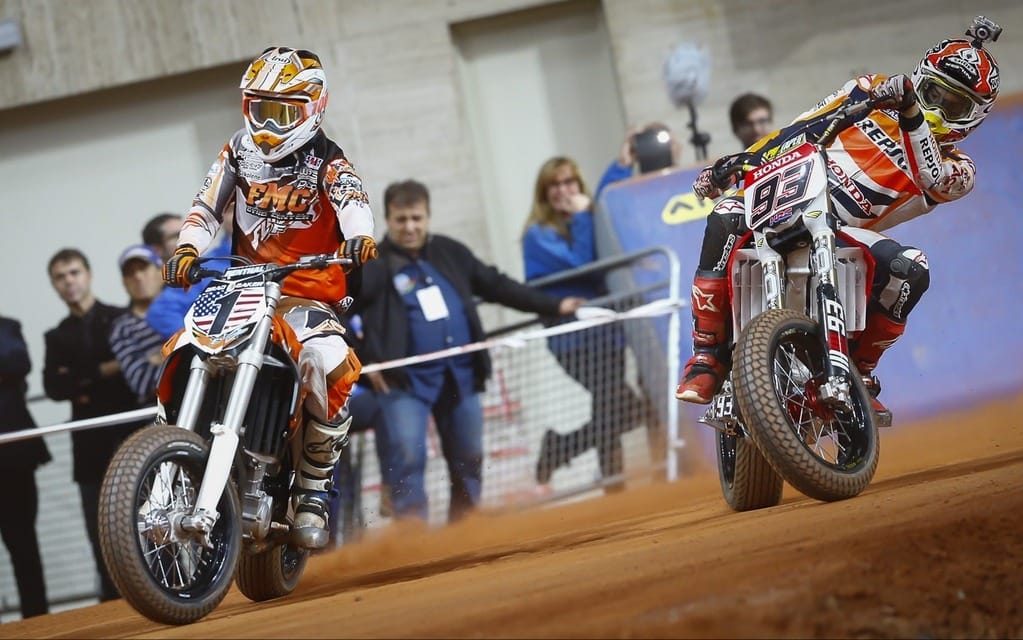 2013 MotoGP champion Marc Marquez is a staunch proponent of riding dirt track as part of his training for road racing, and certainly has some skill on the loose stuff. The Superprestigio Dirt Track races recently held in Barcelona, Spain put those skills on full display. The event featured some of racing’s biggest names, both on pavement and in the dirt.

The Superprestigio division was comprised entirely of road racers, including MotoGP champion Marquez, Moto2 champion Pol Espargaró, and Moto3 champ Maverick Viñales, among many other world-class road racers. Dirt trackers slotted into the Open class, most notably the 2013 AMA Grand National Champion Brad “The Bullet” Baker. The top four finishers from each class then met in the Super Final on Saturday night.

Marquez took the holeshot in the Super Final, though Baker battled him for the lead for much of the 10-lap race. With only a few laps to go the pair made contact, causing Marquez to crash. Although he was unhurt and rejoined the race, Marquez ultimately finished in last place. Baker cruised to victory on his KTM, followed by Tito Rabat and Kenny Noyes in second and third, respectively.

“I feel sorry for having that contact with Marquez in the Super Final,” said Baker, according to Crash.net. “I’d love to repeat this experience back home and invite Marc to the Half Mile next year.”

“I’m extremely happy with this show,” said Marquez. “The fans have discovered dirt track in Spain and they have really enjoyed it, as we did. I hope to see this show back here next year.”