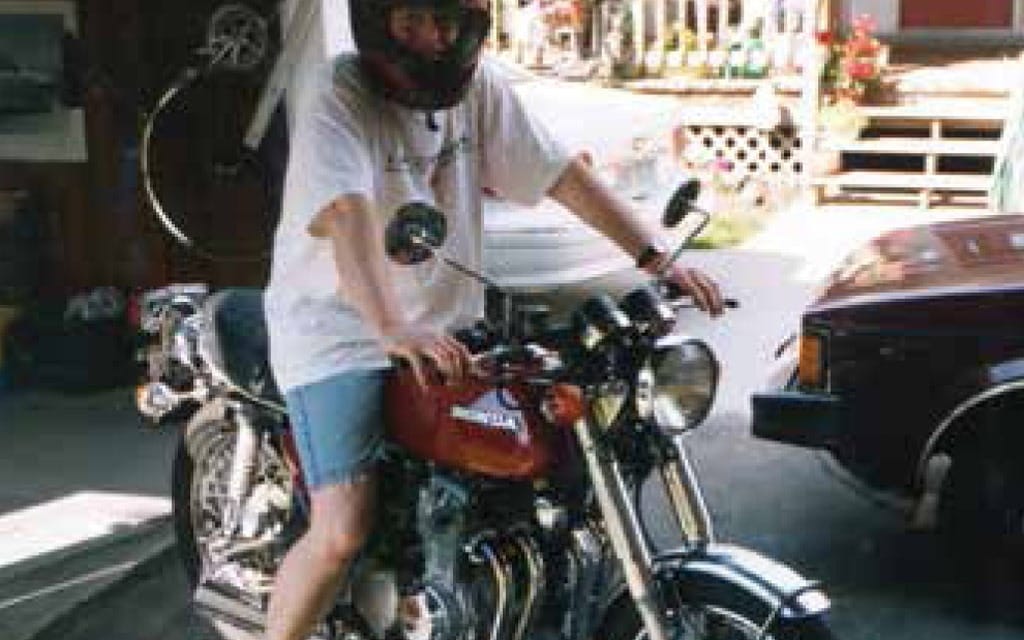 My great uncle Murray McKishnie was stationed in B.C. with the Kent Regiment in 1942. While returning to base after a ball game, he lost control of his motorcycle and crashed, passing away soon after in hospital. He left behind a young wife and infant son. As a result, my mother’s family was always wary of motorcycles.

In the early 1970s, my best friend had an old minibike with a Briggs and Stratton engine. I somehow convinced my parents to buy it for me, and spent a summer buzzing around the woods and fields of our small farm. Because it had no gears or clutch, I did a lot of pushing as well. I finally got to ride a real bike when another friend visited on his CB350 in the late ’70s. After a quick lesson on how the clutch and gearshift worked, I borrowed his helmet and went for a ride. I was unimpressed; a motorcycle seemed to be only for summer recreation, and I had a perfectly practical Toyota Corona at the time.

Jump ahead to 2003. Some of my co-workers rode bikes and one day jokingly asked when I was going to get one. I replied that I only knew how to ride a Honda 350. That got a few laughs, until one of the guys said his neighbour’s brother was selling an old CB350F. It was complete, but hadn’t run in a decade.

I bought the bike – after getting the go-ahead from my wife – and completed the motorcycle training course at Conestoga College. The CB350 was refurbished and I had five years of enjoyment from it before trading it in for an ’84 Nighthawk S 750. While the Nighthawk was great as a commuter, more power and better reliability also allowed me to do some short tours – a work-related ride to Ajax, as well as a Friday the 13th trip to Port Dover one mild November. With shaft drive, hydraulic valves and more than 80 horsepower, it was a great machine. Still, it was showing its age, with parts beginning to wear out or, like my tachometer, fail completely.

I decided to join the Canadian Vintage Motorcycle Group. Their annual meet in Paris, Ontario, and online classified ads were instrumental when it came to finding parts. In addition, joining the CVMG allowed me to further explore vintage bikes. I really admire the styling of older bikes, especially the Italian and German marques of the 1950s. One day I hope to get a DKW, NSU, or Ducati from that era.

Fast-forward again. On an evening ride home from work in November of 2010, a school bus driver didn’t see me as he changed lanes. I ended up high-siding while trying to avoid his rear wheels. The bus driver was charged and my Nighthawk was totaled. Though I didn’t realize the extent of my injuries at the time, I had a broken left scapula and two cracked ribs. After the police had completed their investigation I managed to limp the poor old bike – and myself – home. My wife wasn’t too upset until she saw the damage to my helmet, and many of my friends and family assumed I would stop riding. I spent a night in the local hospital, but only missed a week of work.
After a winter of rehabilitation my bones were healed and I had my eye on the new CBR250RA (with ABS) that had just been released by Honda. I picked one up and it’s been three seasons since the crash. I use it for commuting and recently took it down to Blenheim, Ontario, to visit my parents. The little bike is perfect for my kind of riding, and I’m even thinking of doing a trip following the Grand River from Waterloo to Dunnville – having spent many years in southern Ontario, I know of some nice country roads with hills and curves in that area.

Looking back on my motorcycling history, I’m left with some lingering questions. If I’d had ABS on my Nighthawk, would I have locked up the front tire? What caused my great uncle Murray to lose control while riding back to the base more than 70 years ago? No answers are possible, but I can only imagine that what happened to him could have happened to me.