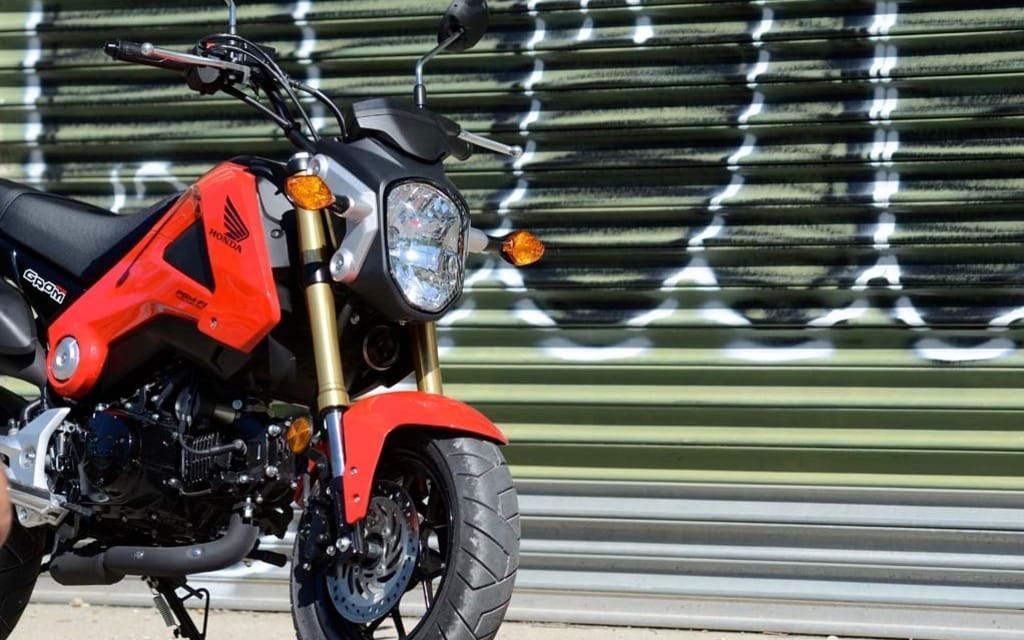 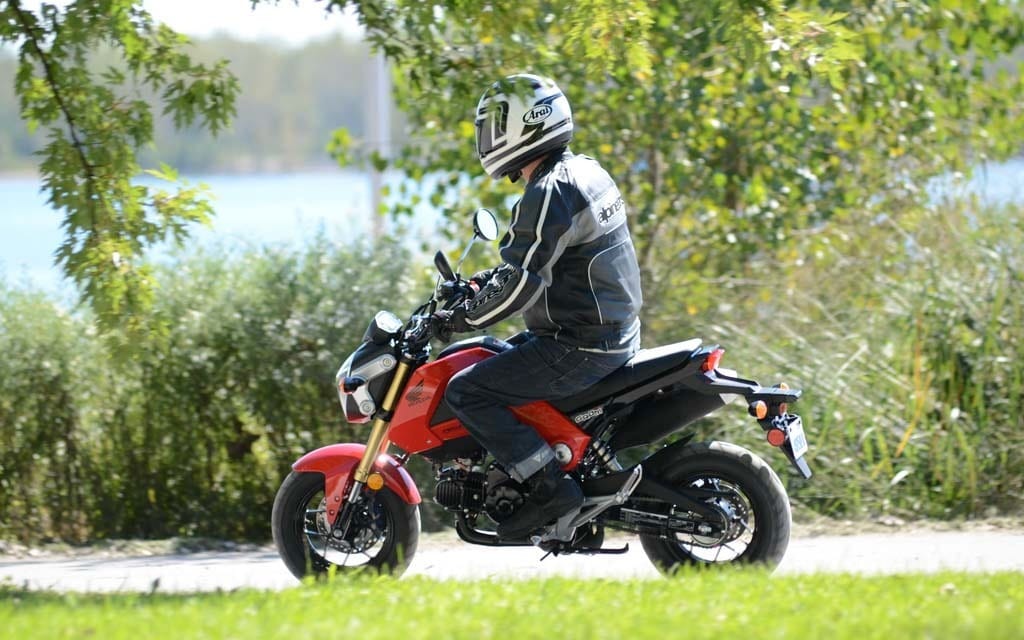 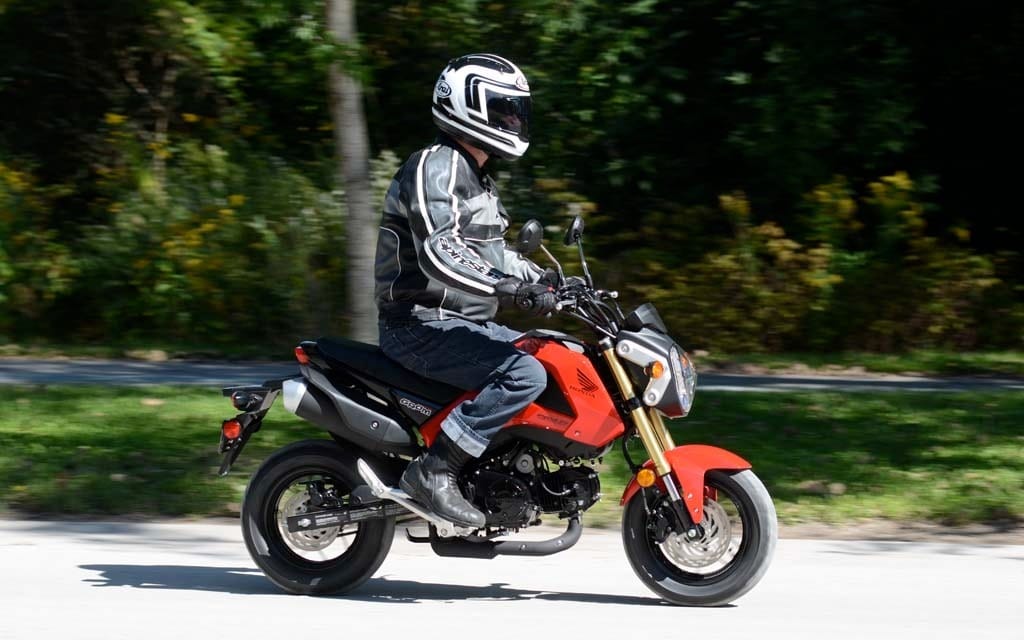 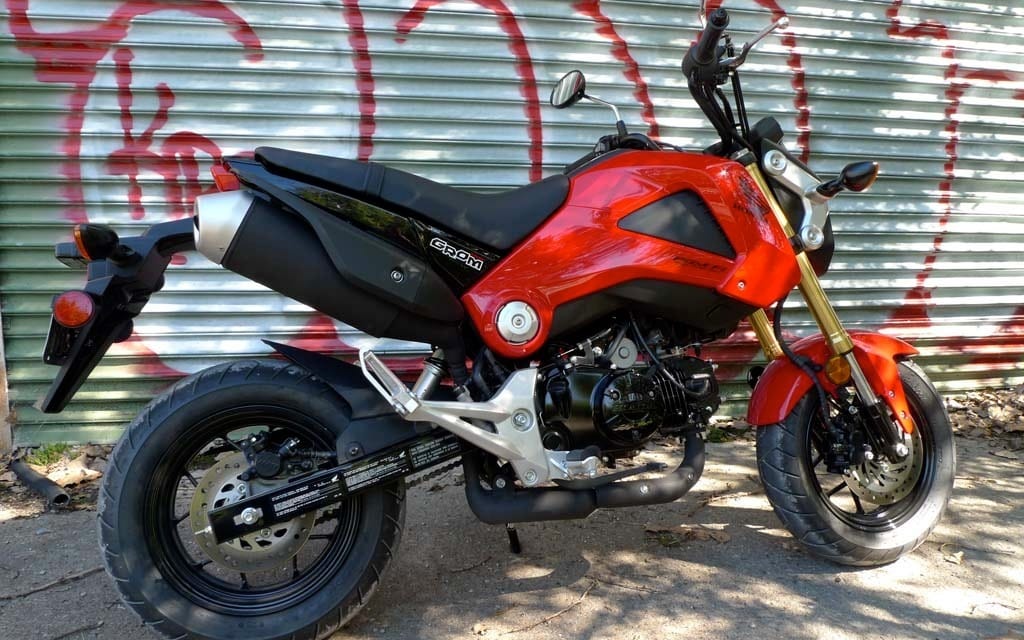 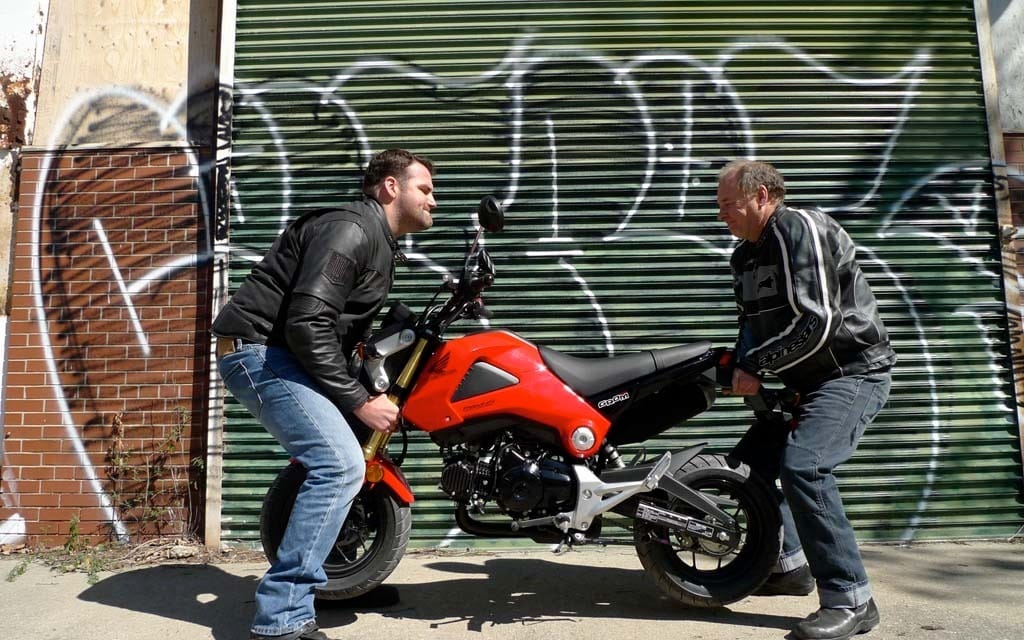 Honda plants the seeds for motorcycling’s future
First off, let’s acknowledge the elephant in the room: the Honda Grom is as small as a mouse. That it’s light and easy to handle is self-evident, though when James Nixon quips that you could pick it up and walk away with it, Neil Graham puts the theory to the test. “All right,” Graham says, “you take one end and Steve take the other.” Thornton looks a little skeptical as he positions himself by the Grom’s rear end. “You get the heavy end, James.” “Is there a heavy end?” asks Nixon. As the lads hoist the Grom, groins strain and arms quiver. The Grom is heavy by human standards, but with a claimed 102 kg it’s a pipsqueak of a motorcycle. After two successive lifts – Graham claims camera trouble during the first – the lifters are flushed. “Heavier than you thought?” Graham asks, looking at Nixon. For the rest of you, sensible enough to roll rather than lift a motorcycle, the Grom is as tossable as a mixed salad.

Though it doesn’t deliver the kind of high performance we often fawn over, the Grom rates highly for fun. And, at its core, isn’t that what motorcycling is all about? We’re often guilty—as motorcycle hacks—of taking too seriously something that for the vast majority of riders is a purely recreational pursuit. It doesn’t matter how many horsepower or how much torque a bike makes—only that you have fun while you’re on it.

Nixon is beaming when we pick the bike up from Honda Canada headquarters in Markham, Ontario, despite knowing that his first Grom experience will be southbound on the deadly-fast (during non-peak hours, that is—the rest of the time it’s jammed) Don Valley Parkway into downtown Toronto. The Grom’s wheelbase is a compact 1,204 mm, while the 765 mm seat height makes this a motorcycle suitable for riders of small stature. At six-foot-two and 225 pounds, “small-statured” does not describe James Nixon: the Grom with Nixon aboard comes across as David giving Goliath a piggyback ride.

Its seating position is sensibly upright, while the handlebars place the Grom’s grips and basic controls naturally within reach. Press the electric starter and the 124.9 cc air-cooled two-valve single whirrs to life, ticking over so quietly that you can hear the turn signals clicking at stoplights. Instrumentation is simple and straightforward, and though completely digital it’s easy to read, displaying time-of-day, fuel, odometer, two trip meters, rpm and speed—the speedometer even registers speed when the bike is pushed backwards. The clutch pull is incredibly light, though actuation doesn’t occur until very late in lever travel; the Grom can easily trick you into thinking it’s stuck in neutral.

Heading south on the DVP, the Grom maxes out at 105 km/h, but even at full whack it’s still solid and stable. Though Nixon keeps mostly to the right lane, he does pass one particularly slow Toyota Corolla, the driver looking stunned to see Nixon’s head and torso float gently by while the bike itself remain hidden below her window. Although it’s (nominally) capable of highway speeds, we wouldn’t recommend using the Grom for a weekend getaway to New England.

For the inner city, however, the Grom is in its element. Despite the power limitation due to engine size (we’ve seen dyno runs on the Web that registered as little as seven rear-wheel horsepower) and despite having only a four-speed transmission, its engine, especially through second and third gears, is delightfully torquey. Fuelling is smooth and predictable, and, given its light weight and the relatively sedate speeds it’s capable of, the Grom’s Nissin brakes (220 mm rotor with dual piston caliper front and 190 mm rotor with single piston caliper rear) are as good as they need to be. Its small size makes for nimble handling in tight quarters and squeezing the Grom through traffic is like throwing a hot dog down a hallway. The small-diameter 12-inch rims with angled air valves (a nice touch) make it easy to top up the stout Vee Rubber tires of 120/70 front and 130/70 rear.

We ride the Grom all over the Greater Toronto Area, one tester taking Lake Shore Boulevard all the way to Burlington and back. Not surprisingly, there’s plenty of uneven pavement to test suspension, and, much like CC’s Steve Thornton, the Grom comes up a little short. The front end features a 31 mm inverted fork with 99 mm of travel, while the rear sports a single shock with 103 mm of movement. A particularly bad stretch of road under construction bottoms out the suspension and transfers teeth jarring jolts through the Grom’s stiff seat. A pothole in dappled light is like a jaguar in the jungle: damn near invisible. To be fair, our complaints about the Grom’s suspension could have something to do with the size of our testers, and can’t be solely attributed to shortcomings in the bike itself; for a teenager of 110 pounds, the Grom’s stock suspension may be entirely adequate.

One category where this bike excels is fuel efficiency – that 125 cc single is a gas sipper. The fuel tank holds five and a half litres, and with a consumption rate of 1.9 L/100 km, the Grom goes a good distance between fill-ups. Another plus to being pint-sized is the ability to park just about anywhere—provided you trust in the goodwill of police and parking enforcement officers. One tester pushes his luck, tucking the Grom between a post and a garbage can in front of his neighbourhood coffee shop. The passing police officer, instead of a stern reprimand, asks only “How many cc’s?”

And that’s the other thing about the Grom: it’s a conversation starter. One man stops his car in the middle of a parking lot and jumps out. “That motorcycle is just too cute!” Now, “motorcycle” and “cute” are two words you don’t often hear together, but in this case the description is apt. The Grom gets a lot of looks and most often the onlookers are smiling, while waves from other motorcyclists begin out of habit and end in a hard double take—you can almost hear them saying, “What the hell is that?”

The Grom’s promotional videos are aflutter with wheelies, stoppies and burnouts. Riders race around empty parking lots, through abandoned industrial buildings and stunt in skate parks. Clearly, Honda is targeting a young, urban consumer. Honda is also hoping that a customization scene will develop—along the lines of the Honda Ruckus, perhaps—and that Grom owners will view their bikes as platforms for personalization. It’s already happening overseas, with online forums and custom components becoming available.

Given the aging core customer base of the North American motorcyclist,
Honda may be onto something in terms of planning for their not-so-far-off financial future. The Grom is a starting point, a way to attract and cultivate the next generation of motorcyclists, and it’s a generation they hope will start on a Grom and stay on a Honda.