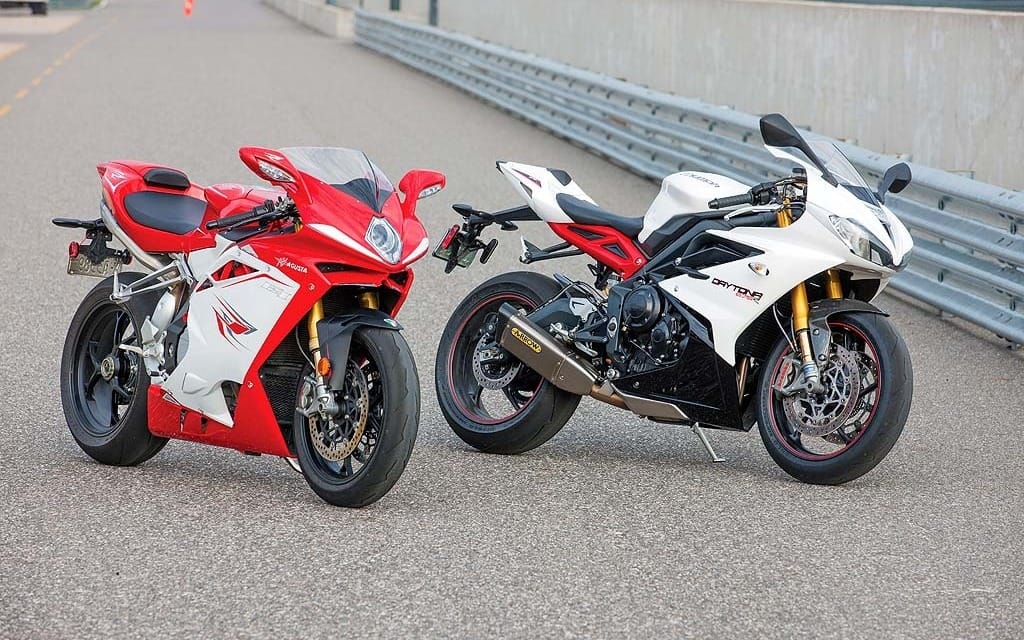 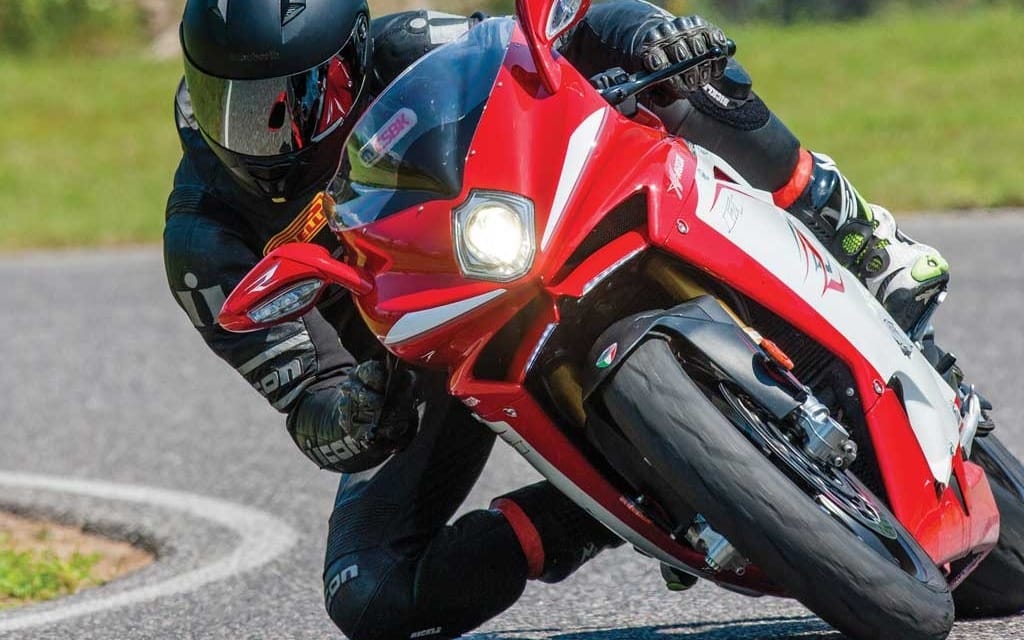 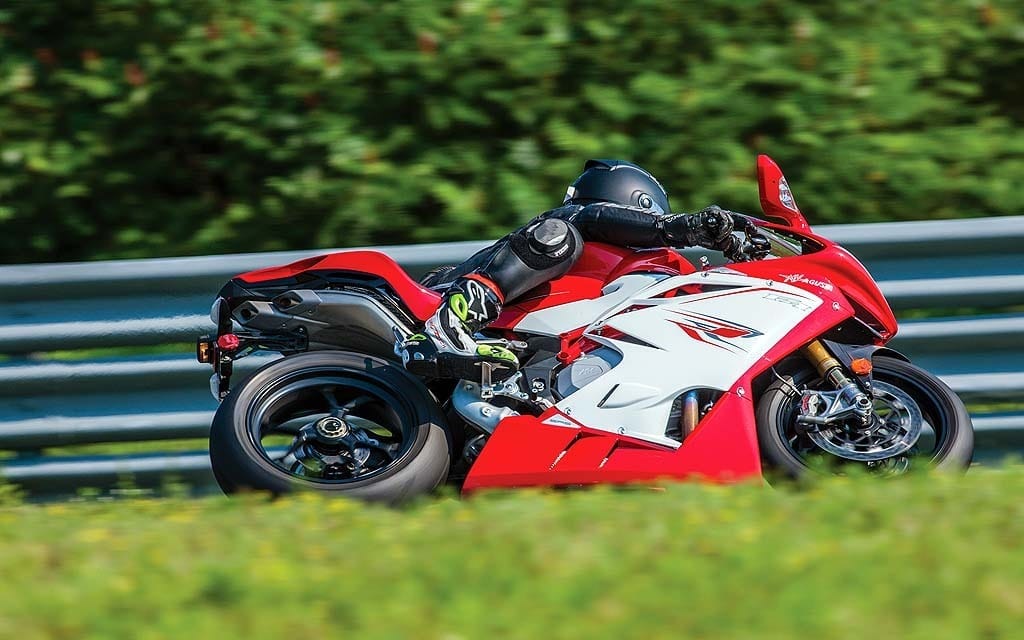 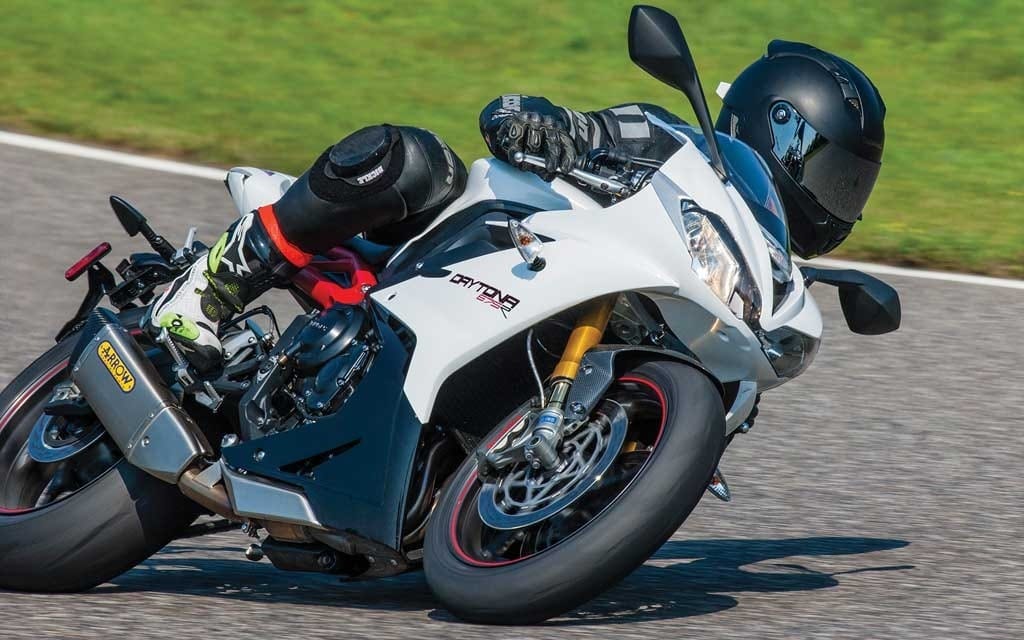 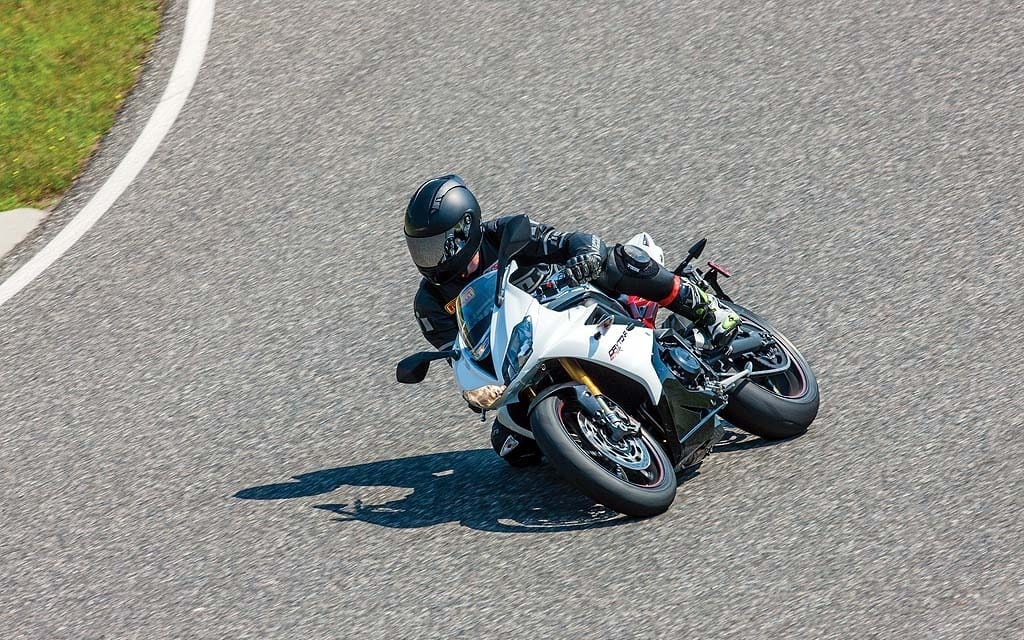 Of Angels and Demons

Everyone knows that big bikes are faster. But are they quicker?
Photographs by Bill Petro
It seemed like a good idea at the time. Take a rip-snorting superbike (MV’s 1,000 cc F4 RR) and a sublime middleweight (Triumph’s Daytona 675R) to a racetrack to determine, once and for all, which is faster on a racecourse. This idea began to percolate years ago, when I was looking over the timesheets at a Canadian Superbike series race at Mosport. Even with an additional 50 horsepower, and the best riders in the land, the big bikes could only go a second or two faster a lap than the little 600s. I was shocked. I might be intimidated by 180 horsepower, but Szoke and McBride and Christie and Welsh certainly aren’t. It seemed to suggest a point of diminishing returns—that above a certain threshold of power, little is gained.

At track days and at press launches, those of us who adore middleweight sportbikes would greet each other with secret handshakes and knowing glances, and then convene meetings where we would repeat our mantra — that riders of less-than-professional caliber (meaning us) all go faster on 600s than on 1,000s. So smug we were in the rightness of our assumption that none of us ever thought to put it to the test. Until today.

As I roll out of pit lane at Calabogie I flip my visor down and simultaneously give the F4 RR a fistful of throttle. It is the first and last time I treat the twistgrip on the MV with such cavalier disregard — from then on I address it with the caution one would apply to a knife sharpened on both sides. Three laps into my session I realize that the MV is an enigma. It is both a thoroughly modern motorcycle with sophisticated electronics and a throwback to fire-breathing superbikes of a decade ago. On the surface it would makes sense to believe that electronics can burnish the rough edges from a motorcycle that claims 200.8 (!) crankshaft horsepower. Electronics tame response at the limit, but far before limits are reached the MV displays an addictive yet thoroughly terrifyingly countenance. The difficulty for the (thoroughly terrified) rider is that the ride-by-wire throttle is exceptionally light in action and makes you wonder if subtle throttle inputs are routed through a computer server in Bangladesh before being relayed by cell phone to the bike’s central computer. Whereas in the last decade sportbike performance has been all about using electronics to temper giant horsepower to usable levels, the MV F4 RR didn’t get the memo. Put it this way: if BMW’s S1000RR is the height of usable power, F4 RR engineers have thumbed their noses at the Germans and made punitive sauerkraut comments. The F4 RR is the anti-S1000RR. But it’s not all bad. Not at all.

Sometimes it’s fun to be terrified. And on Calabogie’s longest straights the MV rears up and plunges headlong toward the next corner with unrestrained glee. As Nixon discovered on his road ride, the 9,000 rpm kick on the F4 RR is the equivalent of being clubbed on the back of the head with a 2×6. But don’t remain unconscious for long, as the MV’s power has a way of blurring approaching corners to the point where they’re unrecognizable. In the corners the MV is no less subtle, and it feels like a big bike with its weight carried high. In one heart-stopping moment I tuck the front end and begin to crash. Channeling the frugality instinct (I do not want to crash this bike and be forced to own it, though I wouldn’t mind owning it — uncrashed) I jam my knee into the track and the bike and I skitter akimbo to the edge of the pavement where I just manage to regain control before the tree line begins. I could blame it on the 35-degree heat, the pooched tires or simply rider error, but as I trolled back to the pits the big MV had won the battle of rider vs. machine: I was knocked out.

And then the Daytona 675R. What a difference. What a relief. Light, lithe, plenty of usable power and with sublime feedback from the tarmac. I am immediately much faster than I was on the F4 RR and I’m remembering to breathe. Whereas the F4 RR is a bull that you’ve mounted, the Daytona 675 is pliable and accurate. A person unfamiliar with sportbikes would look at the pair of them and determine that they’re pretty much the same, but that couldn’t be further from the truth. After the sheer brutishness of the MV the Daytona’s accuracy requires that I recalibrate rider input. I’ve gone from steer wrestling to dart throwing.

Cynics of sportbikes look at the specifications chart and believe, wrongly, that in the last half-dozen years sportbike development (aside from electronics, that is) has reached a plateau. (But you know how I feel about specifications. Even simple, seemingly benign stats like seat height are virtually useless as they don’t take into account the width of the seat, or if the placement of the footpegs interferes with your feet as they seek the ground. The relationship of a motorcycle to its specifications is like seeking the measure of a woman by the size of her breasts. Shouldn’t we be past that?)

What middleweights like the Daytona 675 have is balance. This is confirmed when I do a session aboard MV’s F3 675. While it’s very much like the Daytona, it feels smaller, and firmer. Both 675s give the rider a gloriously tactile sense of the pavement. The limits of tire adhesion can be safely approached as the bike gives plenty of warning. With the F4 RR it’s a battle of rider vs. machine; with the pair of 675s it’s a matter of man and machine melding into one to explore the limits of your skill. Aside from a few select diversions that if mentioned would garner a flood of protest mail from older readers in Alberta, it’s one of the most divine sensations in life.

The great surprise in this test-gone-awry is that the F4 RR is a fabulous street bike. Now before you think I’ve gone mad, I acknowledge that the seat is hard and the pegs high and that the exhaust roasts the ass. So yes, it’s a terrible street bike, too. But the F4 RR is so suffused with character that it comes through at any speed, even speeds where you won’t get a ticket. So unlike more refined litre bikes, like BMW’s S1000RR or Honda’s CBR1000RR, the F4 RR is never so civilized that it becomes bland.