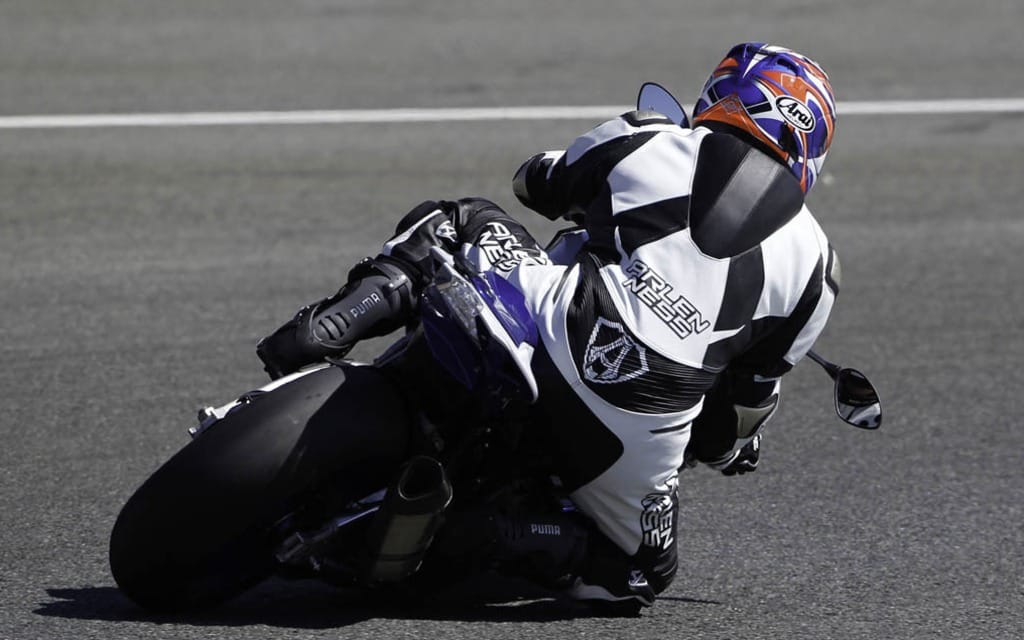 I gave myself a start while I was lubing the chain in the garage after I’d returned home from a ride. I don’t know why I hadn’t noticed it before, but with my nose a few inches from the licence plate I couldn’t help but read the registration expiry date: 15. As in 2015. The year that I am 50. I set the can of lube on the floor, dropped the rag on top of it, and sat cross-legged on the concrete. Fifty.

A generation ago the median age of motorcyclists in this country was 25. Now it’s nearly 50. In the ’70s and ’80s a rider of my age, while not exactly an anomaly, would have been an exception. But now there is nothing at all odd about a 50-year-old rider. At Calabogie for a track day last week, it wasn’t any different. A sea of grey hair (and no hair) everywhere you looked. While it’s good that age no longer defines our leisure activities, an ageing motorcyclist is an entirely different proposition than an ageing lawn bowler or a middle-aged tennis player. Surveying the riders assembled for Calabogie’s rider’s meeting, I wondered if they were fit enough to risk their lives at high speed on a racetrack. I wondered if I was.

This spring I became a serious motorcyclist. While the motorcycles themselves (excepting a period when funds were tight) have been a near constant companion in my life, and my current occupation demands that I think of them every day, I have never done anything to prepare myself to be an actual motorcyclist — I only thought about riding once I’d thrown a leg over a saddle. Thinking about it now, I wonder how I’d been so blasé about so momentous a task.

Riding a motorcycle a momentous task? The statement seems overwrought and yet isn’t it true? Formula One driver Michael Schumacher, himself a very fast motorcycle rider and racer, has said that his early experiences in learning to ride a motorcycle were fraught by his insecurity about the tiny contact patch of a bike’s front wheel. This from a man in remarkable physical condition who’s won multiple F1 titles and who, clearly, understands the nature of tire adhesion on pavement.

When you ride a motorcycle you enter into a physical relationship with a machine, but the problem is that as we get older, our bodies begin to atrophy. This isn’t speculation. It’s fact. It’s the reason that women are better off having children at 28 than at 38. It’s why my daughter can swing back and forth on the monkey bars at the park so long that I’ll have to suggest that she move aside to let another kid have a go. She won’t have this degree of strength per pound of body weight when she’s an adult.

With fitness comes timing and concentration, which is why, for the first time in my life, I’ve been going to a gym. I’ve always been active, reasonably fit, and thought that this was enough to make me a competent motorcyclist. It’s not. I’ve been going to the gym because I’m a motorcyclist. I began to think about fitness while spending time in the company of motorcycle racers. Jordan Szoke and Brett McCormick and most top runners are gifted racers that are also in remarkable physical condition. The racer’s need for conditioning is a necessity of trimming tenths of a second from lap times. But don’t the rest of us, who are predominantly street riders, need that edge even more? Especially as we age? Szoke will never have a car pull into his path, or confront a gravel corner on an unknown road late at night. An unfit racer goes slow. An unfit road rider risks death.

I came to riding a motorcycle on a roadrace track at the age of 40. While other 40-year-olds with years of track experience were slowing down, I was trying to go faster. I’m still trying to go faster, and the only way to do that is to confront inflexibility and the slowing reaction-time of age by building core strength and stamina. As my fitness has improved, so has my riding. A few weeks ago I left at dawn and put 500 kilometres on a sportbike by noon. And I felt fine. No stiffness, no kinks in the neck, no aching legs. It was a cool, fresh morning, which certainly helped, but a year ago I’d have been in discomfort at best, misery at worst.

Last week at Calabogie the temperature was in the mid-30s and at the end of the day I was sore and sweaty and dehydrated. The next day I tried to talk myself out of going back to the gym. I convinced myself that I was too tired. And then I remembered that feeling of my knee skimming the pavement and the sensation of braking from 230 km/h — and without thinking I grabbed my gym bag and went out the door.