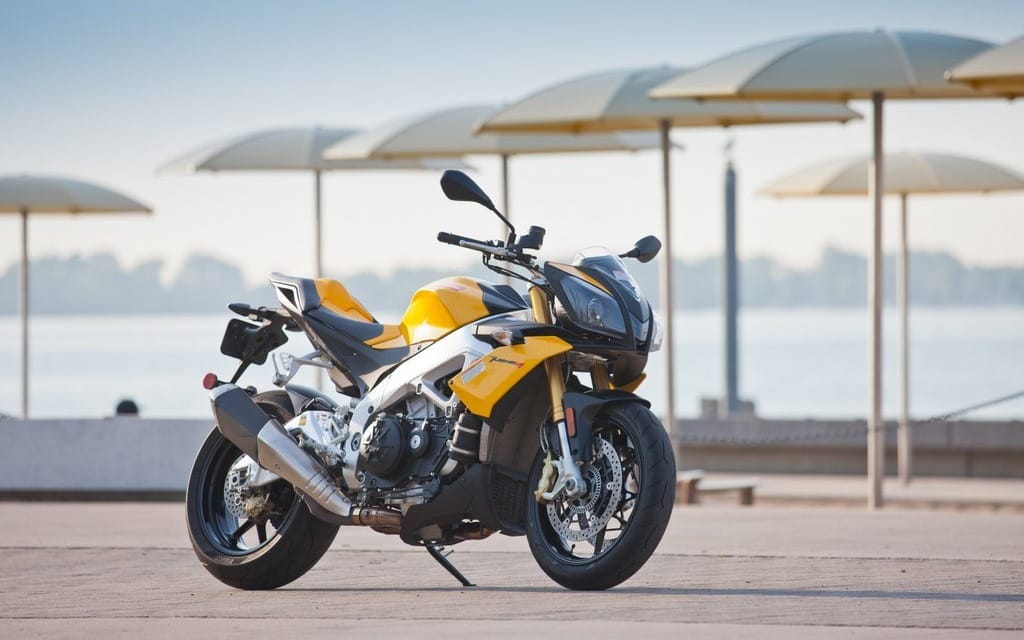 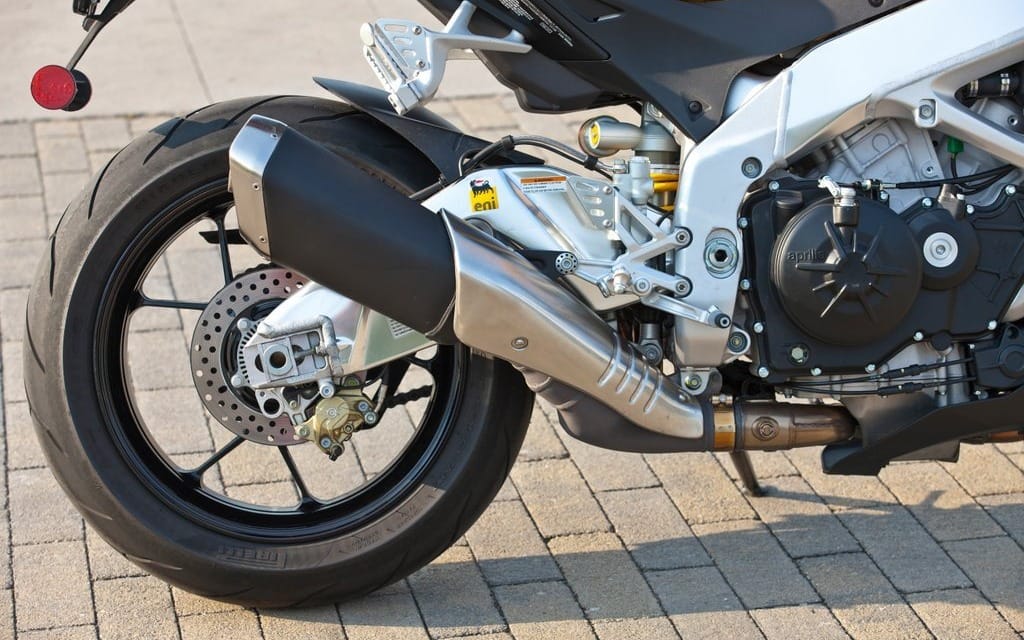 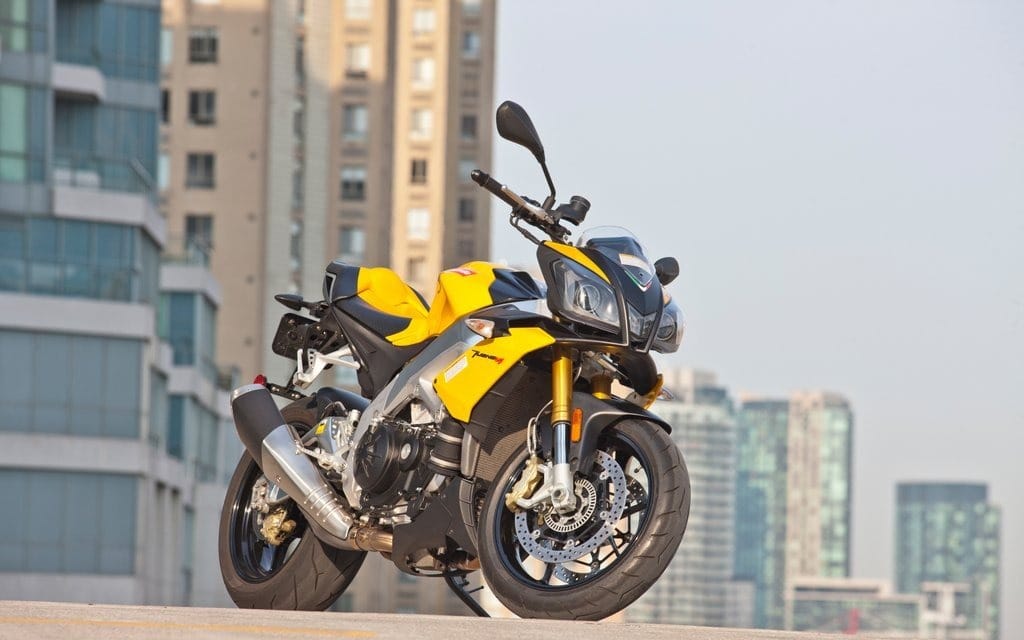 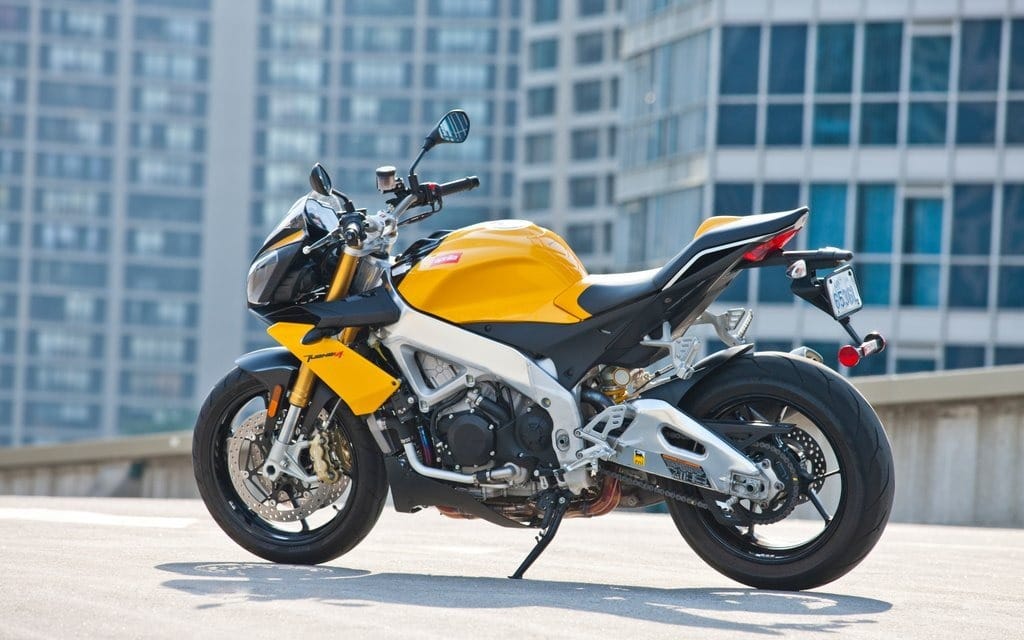 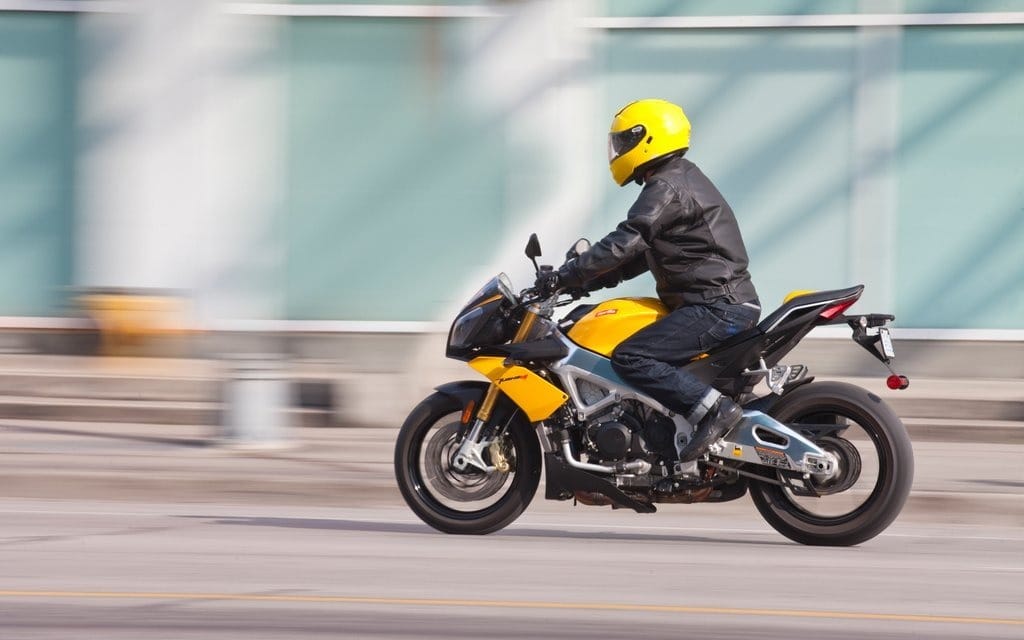 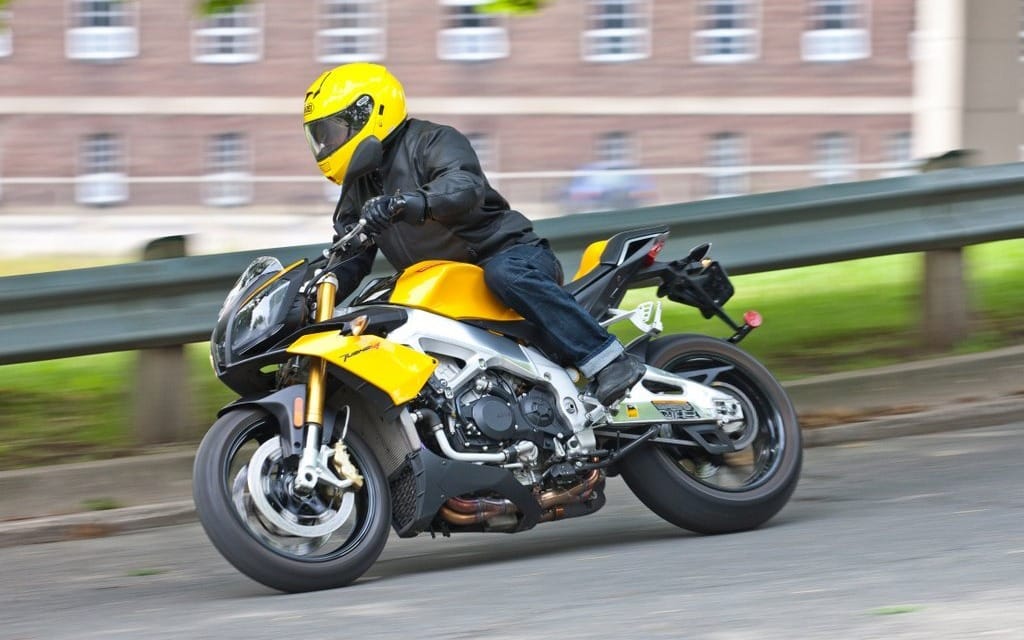 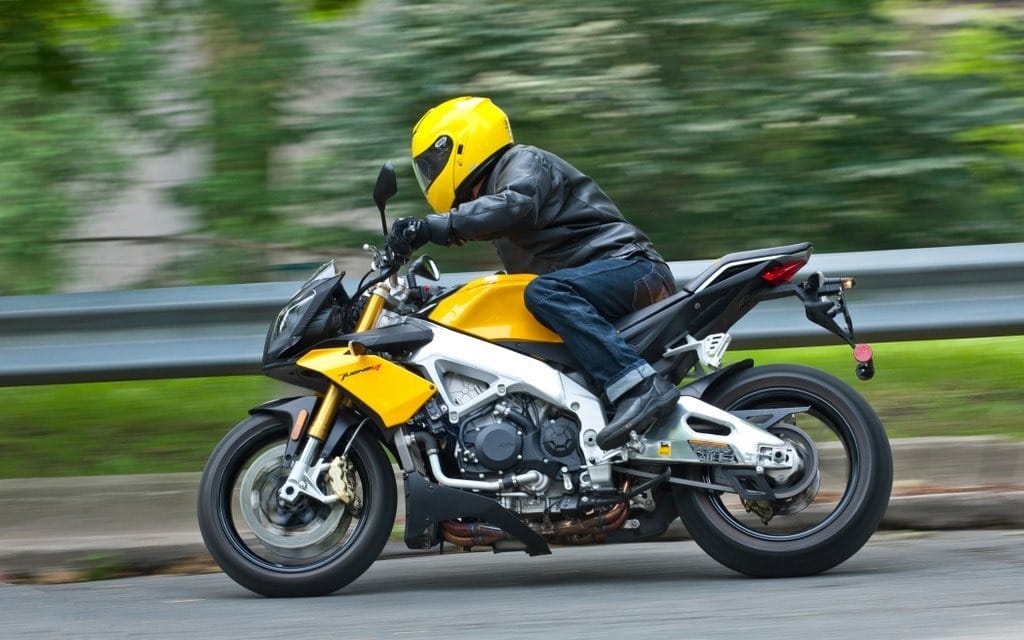 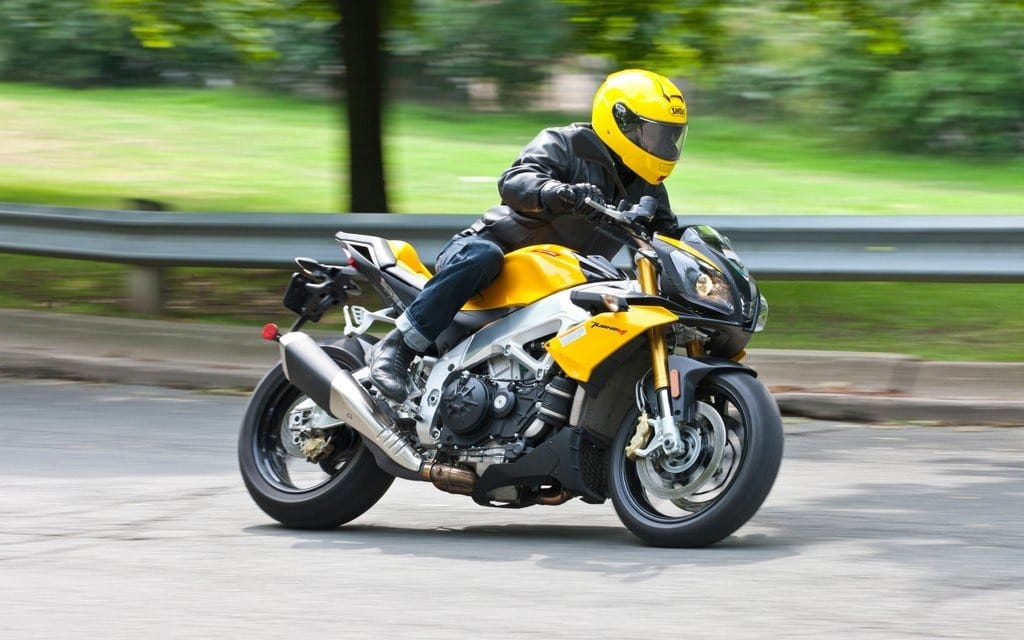 Aprilia’s Tuono Sounds Good to Us

It’s beyond belief—but believe it—the Aprilia Tuono has one of motorcycling’s best-ever engines
By: Neil Graham

I’ve slept in. It’s a Saturday, a rare weekend without my daughter, and it was to be my morning to remember what it was like to be 22, when I didn’t have a watch, when I didn’t know how to tell time. Instead, in 15 minutes, I down coffee and breakfast and drag a washcloth over my face and burst out the door. Then I’m in my car and on the way to the magazine’s bike lockup. But I’m stuck in traffic. I cut off the main roads and try side streets but they’re plugged with moving vans and construction bins. Or neighbours yakking through open windows of cars that block streets — quaint, except now, when I’m in a panic and can’t be late.

I’m late when I hit the lockup. I roll the Aprilia Tuono onto the sidewalk and jab the starter button and am half a stride backwards to grab my helmet when I freeze. The Tuono has leapt to a shrieking high idle. The woman walking past with her yoga mat tucked beneath her arm gives me a dirty look. I give the bike another kind of dirty look. I’m off.

Traffic is worse. Instead of queuing up for a left-turn lane I jump a curb, warble over a cobblestone streetcar-track right-of-way and merge (to the annoyance of every motorist who witnesses) onto the entrance ramp to the highway. And then I give the Tuono a fistful of throttle. First there is a lunge, and then my knees grip the bike, and then my head follows along. Just like in the Roadrunner cartoons. Only this is real. I yell something inside my helmet. I don’t think it’s a word. It’s a howl, an ode to profound and violent motion. And then I pass every car on the highway.

Life as a single parent—along with the death of my parents—means that I’ve pretty much dodged ever having to attend a family function again. But today I’ve been invited to my girlfriend’s father’s house for his birthday celebration. Only it’s not his birthday, not even close. (And it reminds me that being a single parent with dead parents isn’t always so bad.) But I don’t want to be late. I want to make a good impression—I’ve been told good impressions can be redeemed later when you’ve gone and made a bad impression.

As I pass the 65th car in the last five minutes I have a revelation. Maybe we’ve had it all wrong. Maybe motorcycling’s future won’t be secured through modestly priced, fuel-efficient, mid-displacement machines that promise agility and wholesome fun for girls and boys and retirees and the rest of us in between. Maybe this bike is the future of motorcycling, a motorcycle with an engine so outrageously charismatic that you’d rob a priest at an ATM to get your hands on one. Sounds outrageous? Yes, exactly, because it sounds outrageous.

An engine is the heart of a motorcycle, like the heart is the heart of a human. Rip out the heart and the body dies. Or it reads self-help literature and finds solace in Oprah Winfrey. (There are things worse than death.) The Tuono’s 999 cc, 65-degree, counterbalanced V-four comes from royal lineage. It’s the engine that powered Max Biaggi’s Aprilia RSV4 to a pair of World Superbike titles and it’s the engine that powers the best bikes in MotoGP’s Claiming Rules Team subclass. Deviations from RSV4 spec include more conservative valve timing, a heavier flywheel, 20 mm longer intake ducts and shorter gearing on ratios one through three. Remember the old chestnut “If it sounds right it is right”? Well, it sounds right—all of its sounds sound right.

The first sound, after the engine warms and its high idle-speed subsides, is The Purr. It’s the softest sound. But it’s the purr of a beast that could eat you. Blip the throttle and you’ll hear The Growl. The rest require motion. Under load, with a running-late-rider in the saddle, full throttle rewards with a guttural howl that builds to a shriek as redline approaches. It’s wildly, insanely, additive, and the first time you hear it you can’t believe it. A production motorcycle with a stock engine and—shockingly—a stock exhaust system should not sound this good. (OK, they likely cheated. There is no way that this exhaust system can be regulation-compliant. And praise-the-lord for that. Remember: loud motorcycles are not a problem. The problem is the wrong motorcycles making too much noise. The Tuono, of course, gets a free pass in this regard.)

It’s the raw edge to its composed countenance that sets the Aprilia V4 apart from most motorcycles engines. Under load it could only be a V-configured engine, but it sounds like more cylinders than four. I prowled YouTube to find an engine sound outside of motorcycling to equal it, and the only approximation I could find was the V-12 in a vintage Lamborghini. But then (and here’s the kicker) chop the throttle and Italian sophistication is supplanted by a bellow so coarse and visceral on the overrun that you’re sure someone has slipped an American V8 between your knees. It might just be the perfect motorcycle for the prairies. Who needs corners? Just spool it up and hang on.

The madness of my mad dashing gets me to the party on time, and, would you believe, draws a crowd. My partner’s 20-something children, stirred by the cacophony coming from the street, walk out to greet me and marvel at The Sound. They love the bike. Think about that. Young people attracted to a motorcycle. After the birthday-party-that-isn’t ends (I don’t understand the explanation offered) my partner and I suit up and head out. It’s then that I feel guilty, for the pillion pad is perched so far up in the air that it’s like sitting on the top step of a 150 horsepower stepladder with your feet on the next step down. And the seat is made of plastic. As least that’s the report I receive after my girlfriend hops off after an hour. Then, looking at the body-coloured vinyl that she was sitting on, she admits that she thought she was sitting on the rear fairing of a monoposto motorcycle.

But the issues don’t end with a little discomfort. (They don’t matter, mind you, because That Engine has granted the Tuono a lifetime of exemptions from practicality. But so that this test has a veneer of legitimacy, I will briefly discuss them.) Aprila has a traction control system called the Aprilia Performance Ride Control (APRC), and I can tell you what it does and confirm that it does it well, but the interface is so complicated that I only ever access the system at random, like the twirling of the knob on a combination lock will, at random, if you keep at it long enough, open the lock. (I ask a colleague at a big U.S. magazine if he understands the APRC. “Nothing to it,” he says, holding up his iPhone. “I just call the Aprilia rep and he tells me what buttons to push.”

With eight levels of traction control, three maps for the ride-by-wire throttle, (track, sport, road) and wheelie control, the Tuono has it covered. The wheelie control is particularly brilliant, because it allows full-fisted power wheelies without fear of mechanical retribution. On a long uphill grade near Stratford, I sit up, nail the throttle, and carry the front wheel to the crest of the rise. I cannot do acts like this without traction control. APRC also includes launch control, for wickedly fast getaways from a dead stop, and a quickshifter, for upshifts without the clutch. And it has a slipper clutch, which you’ll need when things get out of hand. And they will. Often.

The Tuono, despite its mechanical and electronic wizardry, is not an absurdly expensive motorcycle. Remaining 2012 models, if you can find one, are $13,695. For 2013 the price is $14,695. Both prices are less than at the bike’s launch. Thank the New Great Depression for that. But mostly just thank a bunch of mad Italians at Italy’s other motorcycle company for making such a brilliantly mad motorcycle. It’s my bike of the year—for this year, or likely any other year.