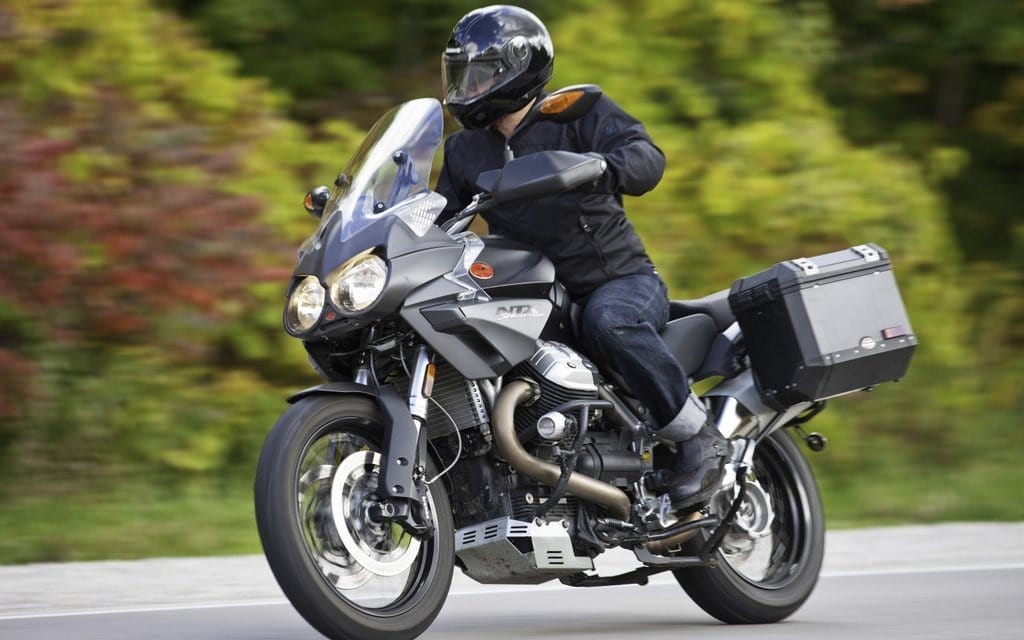 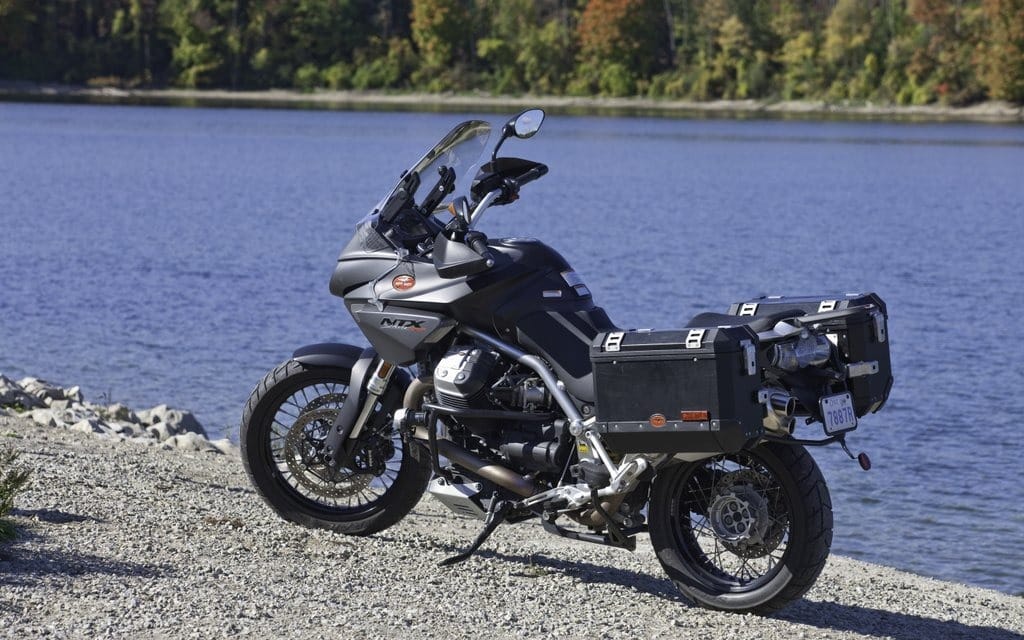 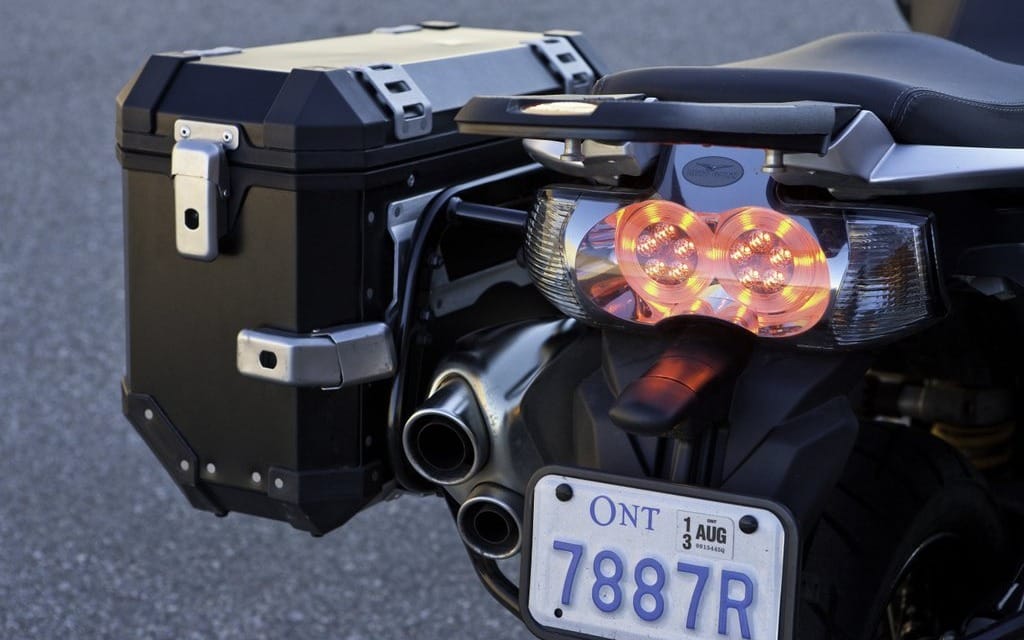 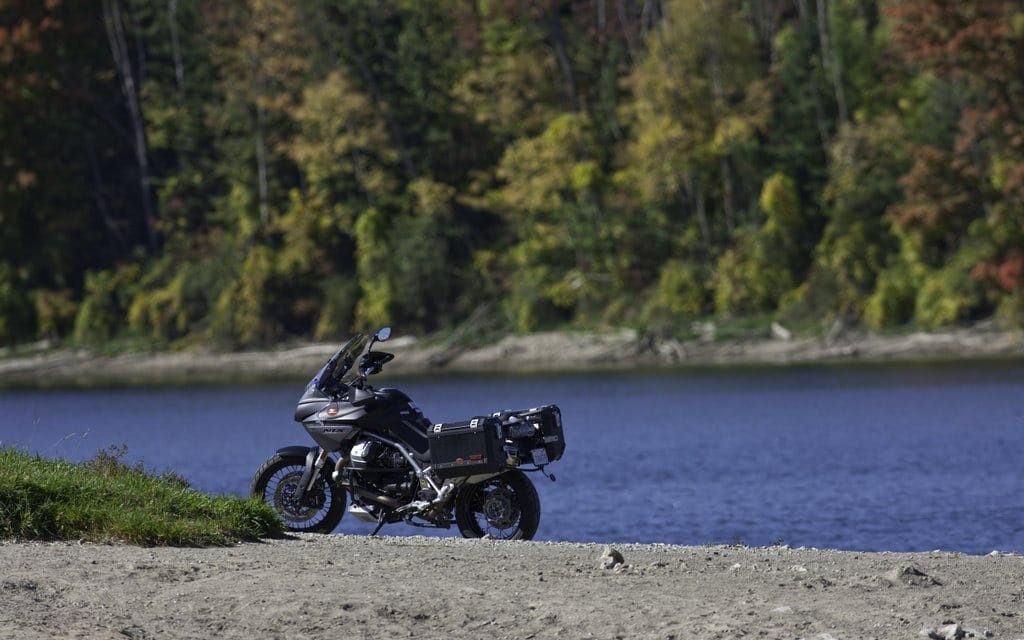 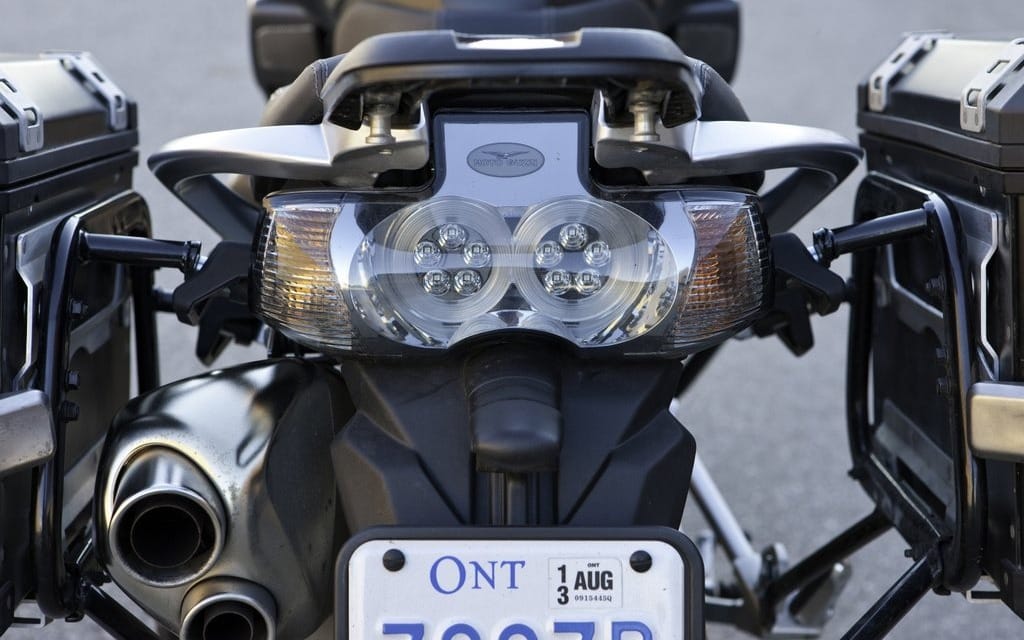 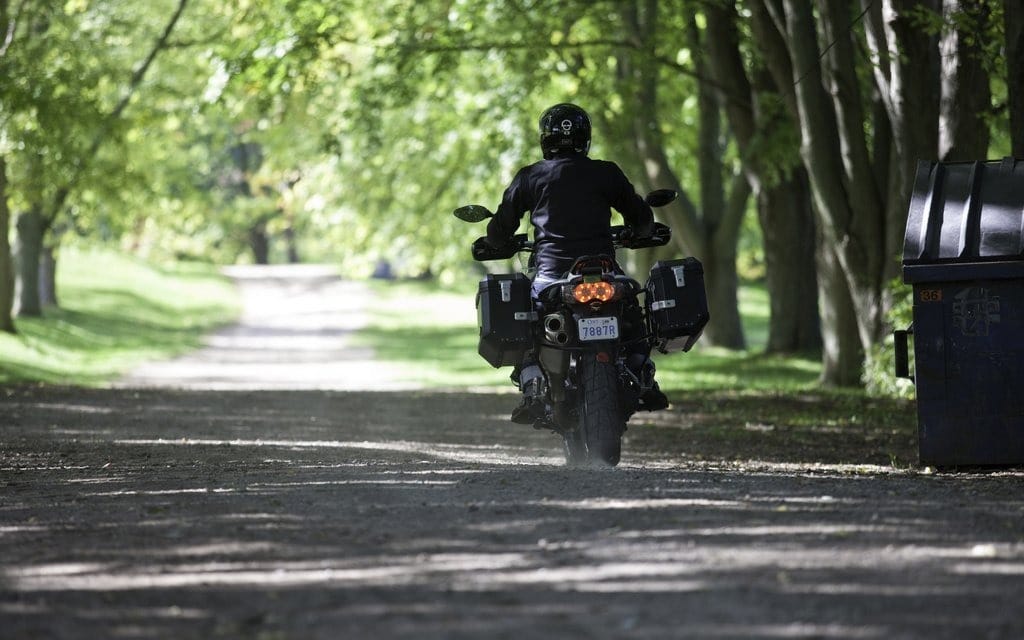 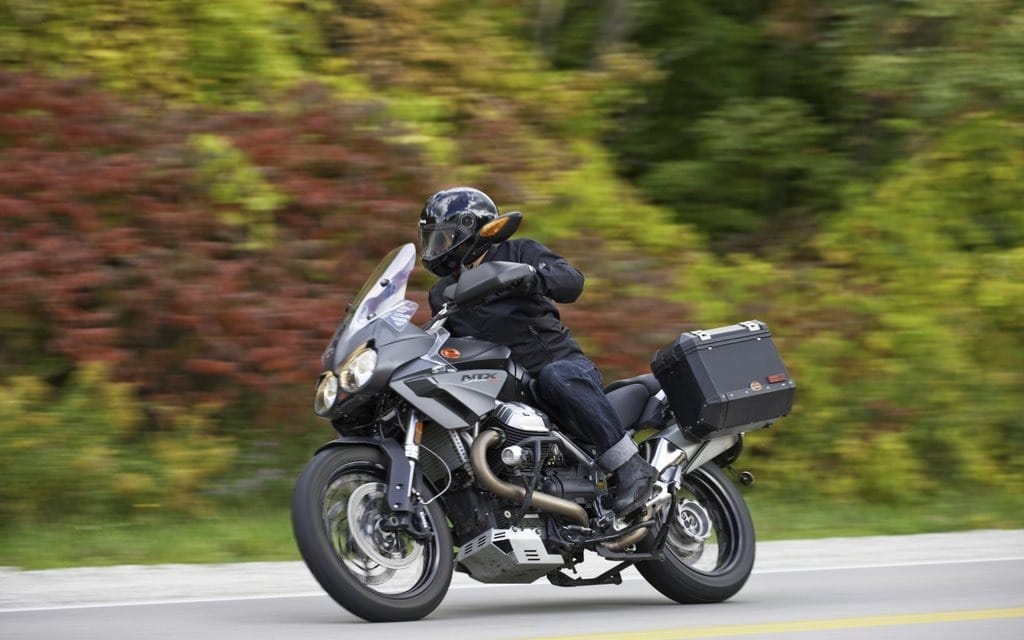 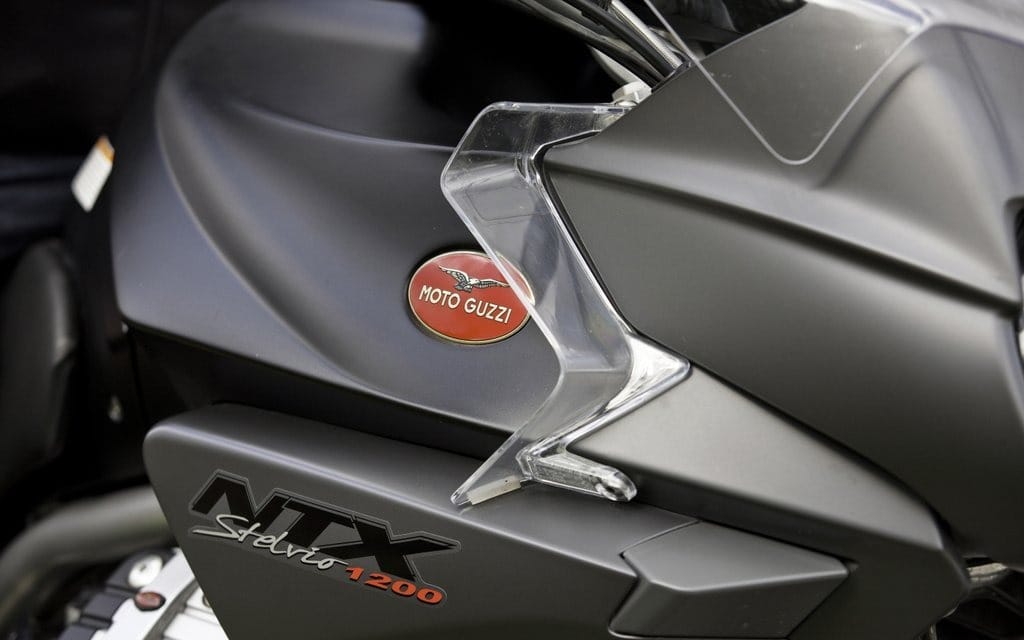 The Stelvio was parked on loose rock, on the shore of a lake. If it were lighter or smaller, this might not have been a problem, but the Moto Guzzi Stelvio NTX is an imposing motorcycle, it’s big, and it’s tall, and it displays a noticeable torque reaction, too, when the throttle is blipped—it’s almost strong enough, it seems, to lift the bike off its sidestand.

Given those conditions, the possibility that a sloppy throttle hand could send the bike lurching into the water was real—not high, but less-likely things have happened. The Stelvio NTX has, unlike the previous Stelvio model (CC, March 2009), traction control—ATC, they call it—but this is of little use when the rocks themselves can start sliding. Steve Thornton was riding it, and he’s just tall enough to sit nervously on the Guzzi’s 820-mm high saddle (a taller rider, like Neil Graham, might have preferred the 840-mm configuration) while it was stationary. Thornton enlised photographer Bill Petro to stand behind the bike, catch any flying rocks, and, if necessary, keep the Guzzi pointed toward land.

And then something unexpected happened. With a little bit of throttle and an easy hand on the clutch lever, the Guzzi rolled smoothly off those rocks and onto higher ground. Petro stood there and watched with his hands in his pockets, not even ducking. The Guzzi’s motion was as stately as a royal procession, and in about half a second, Thornton went from nervous Nellie to full confidence. That might not have been the case with the earlier model, which required more throttle to produce power, but the 1,151 cc 8V engine has been altered in this model to increase torque output slightly and fatten the powerband low in the rev range. That makes it easier to ride at slow and moderate speeds.

On this model the clutch engagement occurred late in the travel arc of the lever, which made performing U-turns a bit of a finicky affair, and the rear brake pedal was poorly adjusted, so standing on the pegs and operating the rear brake was difficult and required sliding the foot around on the peg. Our dancing skills are about equal to those of the Trailer Park Boys, so this didn’t make us happy, but we adjusted.
When Cycle Canada reviewed the previous model, we said it was the best of the bunch from Moto Guzzi. The good news is that despite a few small details going a bit wrong, Guzzi has not lowered this model’s standards, and some of the improvements in the NTX model have made the Stelvio an even better motorcycle.

The words Quattro Valvole are stamped on the valve covers of each of the transverse V-twin’s heads, and Moto Guzzi claims the eight-valve engine is the “highest performer among all the families of engines” they make. The engine’s total output of 105 claimed horsepower at the crankshaft is not higher than was claimed for the previous model, but it feels stronger, thanks to increased torque at low and midrange rpm levels. The engine puts out large amplitude vibrations at low operating speeds, and rolling on the throttle at 100 km/h in high gear, where the tach indicates 3,500 rpm, produces heavy vibration, but the engine smooths out at higher speeds and in any case the vibrations are not annoying. The Stelvio’s electronic control unit runs both the ignition and the fuel injection, and does it without any glitches, but also operates the traction control system by interfering with ignition timing and fuel allowance—it’s a neat system that appeared faultless. Another nice touch for home mechanics is an easily adjusted rocker arm setup for the four valves in each cylinder head. This is no Ducati, but that’s a good thing when you’re getting out the tools.

The new Stelvio’s fuel tank has been enlarged considerably, from 18 litres to 32, which will stretch the distance between gas station stops to well over 400 kilometres under ordinary riding conditions. That extra fuel can make the bike a bit top-heavy; wheeling it around a garage floor with a full tank can be a chore, but it’s not really noticeable when riding. The Stelvio is not light, at a claimed 272 kg full of gas, but it’s not much heavier that competing models like the BMW R1200GS Adventure and the Triumph Tiger Explorer, and the bike feels balanced and stable when moving, even on soft surfaces.

That’s not to say that the Stelvio NTX is a true dual-sport motorcycle; it’s fitted with Pirelli Scorpion Trail tires that are decidedly pavement oriented, and while the 45 mm fully adjustable Marzocchi fork and rear Sachs shock, which adjustable for spring preload and rebound damping only, provide a plush ride, the suspension is not truly designed for off-road work and the bike is simply too big and too heavy to take into serious off-road territory. But heavy-duty bushwork is not what the Stelvio was intended for, and no sane owner would even try it (though the ABS can in fact be easily deactivated by a handlebar switch to enable braked rear wheel slides). The Guzzi’s high, wide handlebar; large, easily raised windscreen; narrow but comfortable saddle; and torque-rich powerplant contribute to a road ride that is much more comfortable and even more fun than you might expect. The Stelvio might be more comfortable on the odd gravel or dirt road than, say, a CBR1000RR, but it would also be markedly more comfortable than the sportbike on pavement, too. The rider sits with a straight back, arms at a comfortable angle, and legs bent at 90 degrees; the windscreen does a good job of diverting air, and the seat does not get hard after a couple of hours on the road. The Stelvio was named for a mountain pass road in the Italian Alps and as such it has big Italian shoes to fill: the Stelvio Pass highway is one of the greatest driving roads in the world. And it’s paved; it says something that the Moto Guzzi was named after a legendary paved highway.

When Moto Guzzi’s designers were reconsidering the Stelvio, they wisely left some of its best features alone, but also, strangely, failed to include some minor improvements. The saddlebags, for instance, are still large, tough, aluminum boxes with hinged lids—all good; but they still don’t have handles and don’t lock to the bike—not so good. On the other hand, changes to the fairing and windscreen are claimed to have improved airflow (the windscreen is manually adjustable, and easy to operate, too) and would likely contribute to rider comfort on a long journey. The seat is narrow in front, which allows shorter riders to reach the ground more easily, and there’s a well-designed and useful rack behind the passenger perch. Nice touches.

What we liked most about the Stelvio was its relaxed, comfortable personality; it is easier to ride than it looks and it would make a good cross-country touring mount, especially given the luggage it’s fitted with. But the engine, which is still easy-going and understressed, has been improved just enough to make the Stelvio NTX a more engaging motorcycle than its predecessor. It produces a lovely growl under acceleration, makes good thrust very quickly, and can be ridden hard. In fact, in good hands, the Stelvio could challenge sportbike riders on its namesake. And then it could carry its rider home again in perfect Italian comfort.