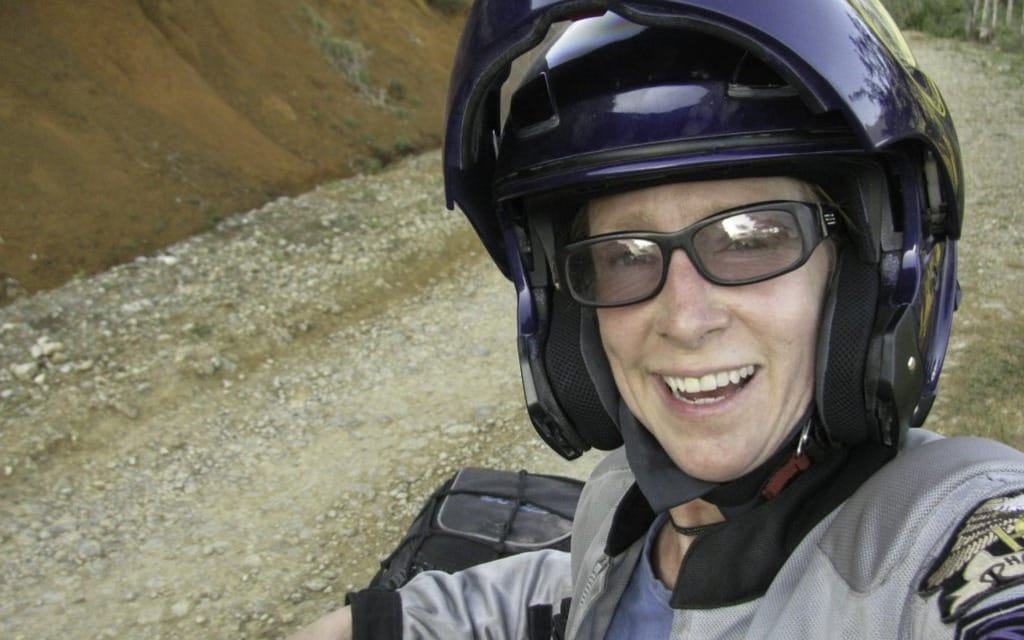 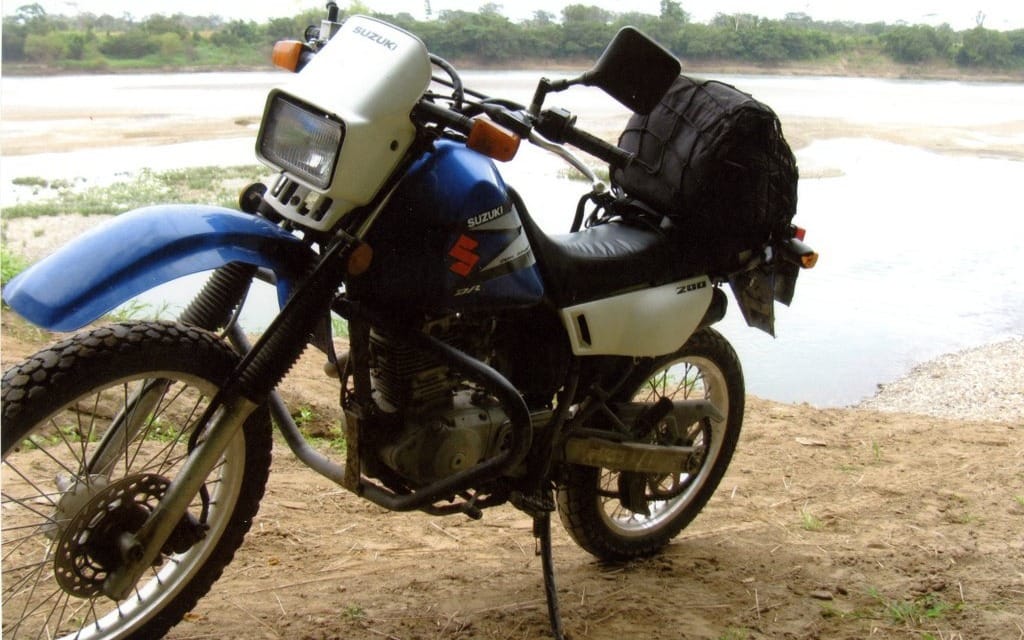 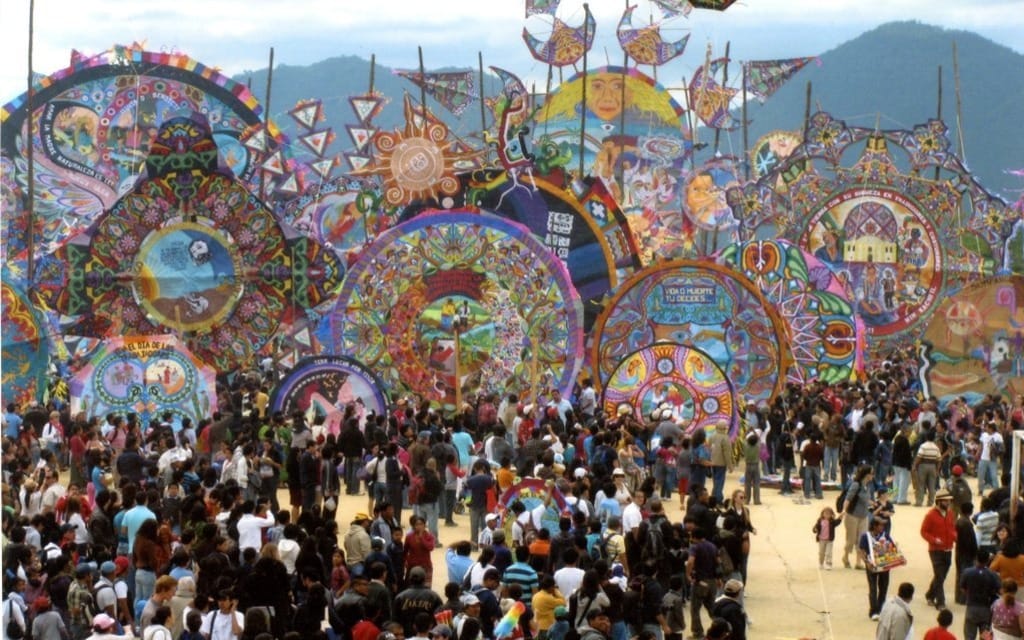 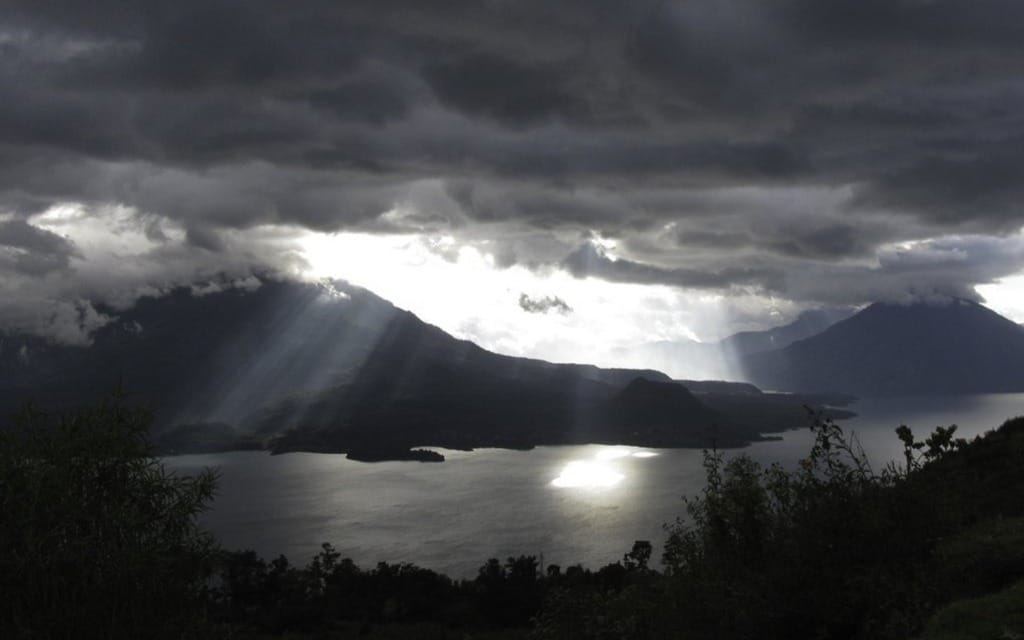 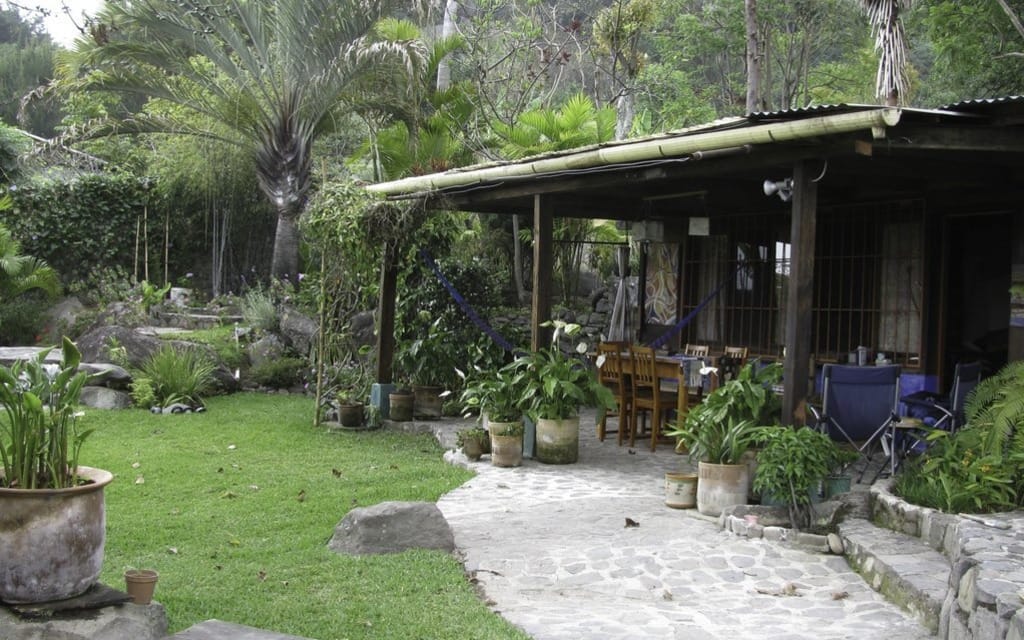 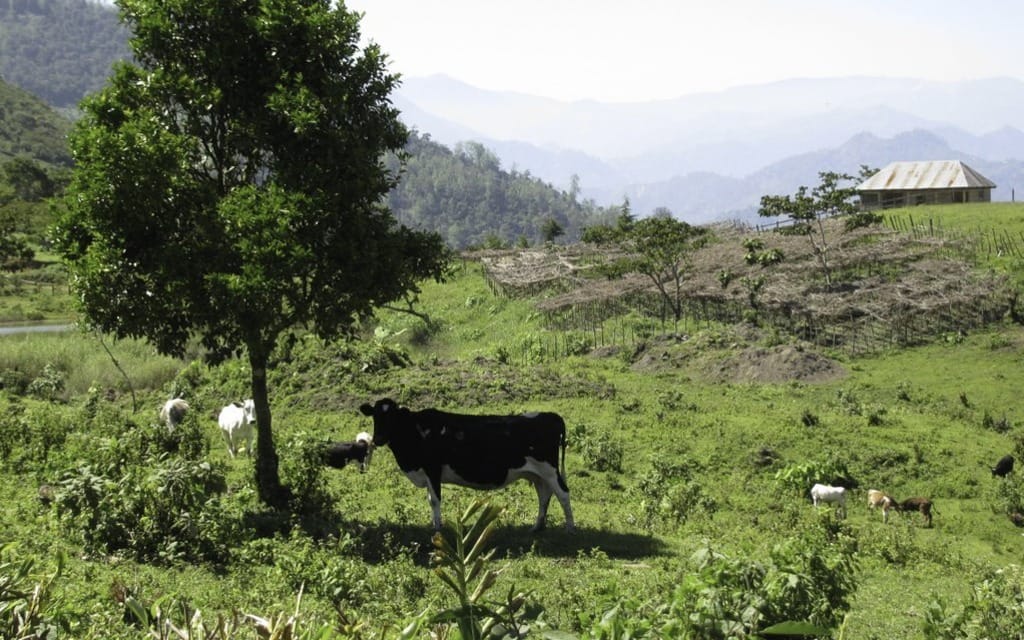 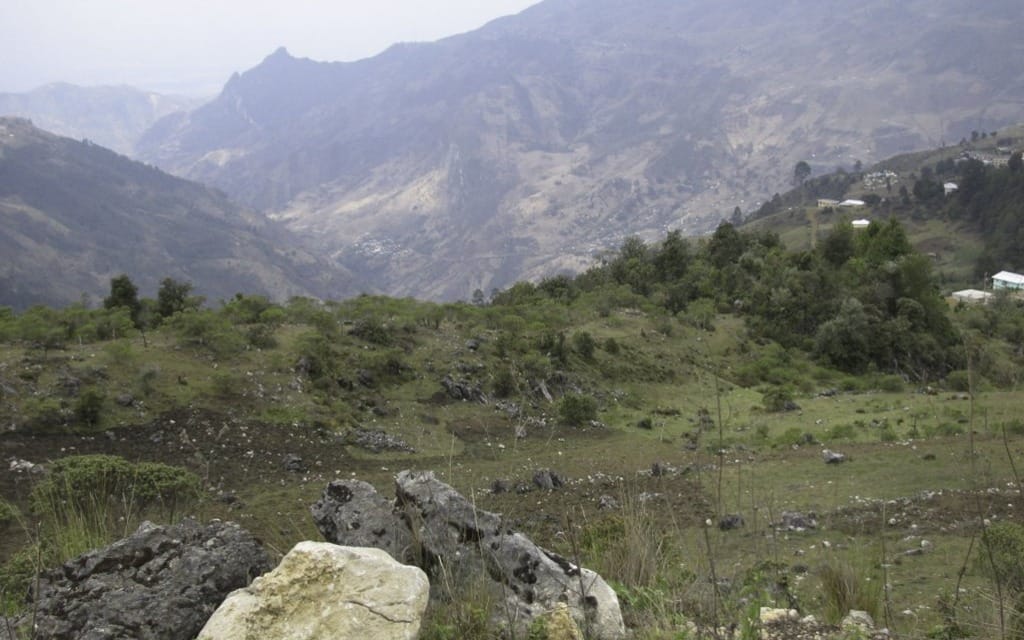 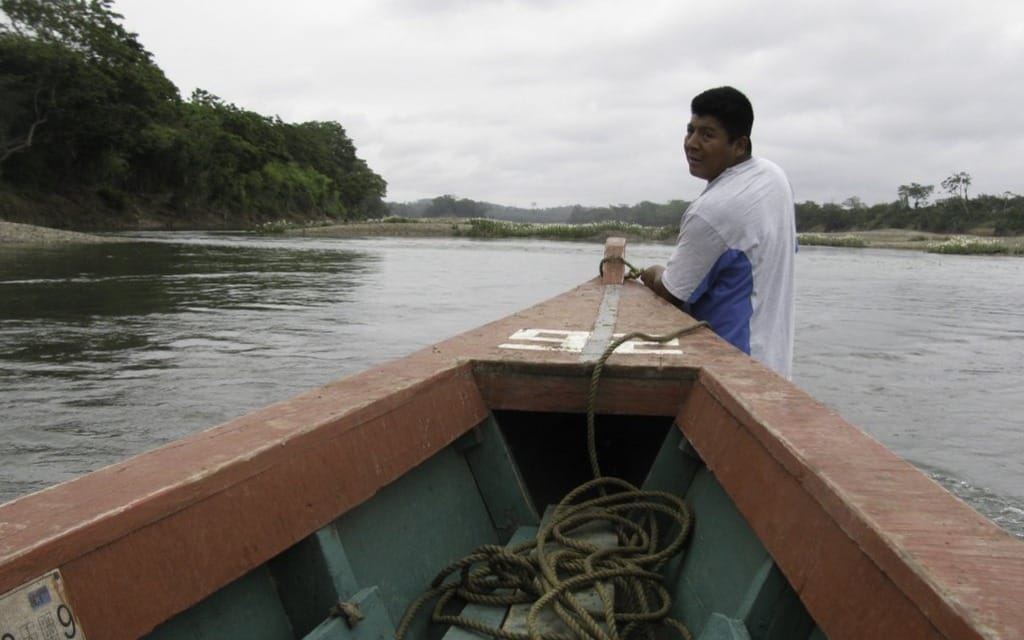 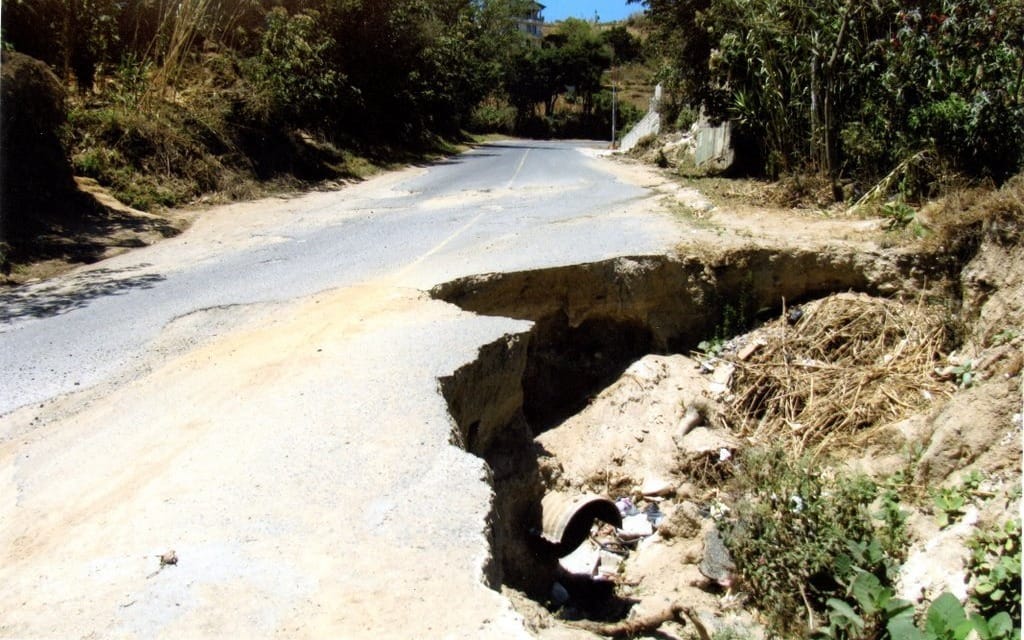 A Funny Thing Happened On The Way To The Ruins
Mexico, early March, near the Guatemala border. The rains are still two months off, and so Christine Waddington is dressed sensibly in a thin, textile riding suit. She has been on the road – or at least, has been moving, sometimes on what you’d call a road – for about three days, headed by an elliptical and sometimes dangerous route to some Mayan ruins: a sight-seeing trip, this is. Waddington is Canadian, single, and adventurous, has spent years in Guatemala, and knows the territory, the people, and the climate. Sort of. She is lost, can’t speak the local language, and is wetter than a rat in a waterspout. This damn rain will not stop, and her shitty garbage-bag rain-suit holds in more water than it keeps out. And now at a military checkpoint they want her to please, gringa, get off the bike.

The bike: a Suzuki DR200, little blue dualsport—though not so little in Guatemala: the police there used the same model for years, she says. She bought the Suzuki when she turned 40, a birthday present. It’s seven years old now, but dependable, and about the biggest bike you’d want down here, where a road can turn to mud overnight or become a field of rocks just around the next hill.

On March 2, she sets out from her home on a Guatemalan lake called Atitlan, bound for a couple of villages, Chajul and Barillas, and from there into Mexico, where she wants to visit some ruins. So, northwest to Nebaj, then northeast to Chajul, and then northwest again to Barillas. This takes a couple of days and at first, the roads are paved, smooth, but after a while — well, let’s hear it from Christine: “I had been looking at an old map and I saw a road, and I thought, Well, this is a different road, I’ll take this one … so I asked a few people about the road, and one person said, ‘Oh yeah, I’ve been on that road.’ Lied! So when I got to Chajul, I started asking about the road to Barillas, and no one knew what I was talking about.”

She talks excitedly, manic, consulting a notebook where she scribbled thoughts while recovering from a day’s riding, or while sipping coffee and waiting for the skies to clear. It’s hard to follow her, she falters in her speech, her scribblings as hard to read as the faces of those Mayan Indians she consulted nearly a year earlier, in the highlands of western Guatemala.

“Left Chajul 11:30. First stretch, road lovely, green, then hinterlands of mountain country, nobody to ask directions, road became progressively steeper, rockier, streams and chain barriers, bike skidding, slipping, me sweating, heaving fallen bike around and it went on and on and still I had no idea where I was. Spanish? Huh! (‘That means everybody spoke indigenous languages; nobody understood Spanish.’)” The road surface was loose rock, and time after time she dropped the bike, struggled to get it back upright, struggled even to find solid footing. After she’d fallen a few times, she started removing the saddlebags before righting the bike. On that road, that day, she fell eight times.

Again, from her notes: “Hot, silent sun is witness to my agony, bruises up and down shins, shirt soaked in sweat, couldn’t even cry, so exhausted that I want to give up and live behind a rock. No food, drank water from a stream. (‘I’d never drank from a stream in my life.’) Arrived Barillas, finally, at 6 p.m. Last 20 minutes took forever, drizzle started, bedbugs attacked at night.”

She puts down her notebook. “That was hell, not knowing where you’re going, nobody to give you directions. You can’t see villages, nothing’s on a map, you’re just in this massive mountainous area of nothing. You’re driving and you come to a dead end because there’s somebody’s property chain up. And I can’t just ask men for directions.” She has been assaulted, robbed, knows better than to approach a group of men and take off her helmet. Up ahead are a few men by a chain that stretches across the path. She is no longer on a public road; this is Mayan Indian land, and the awareness of that is a slap in the face. “And the older man went to let me through, and the younger guy said, ‘You have to pay.’ I said, “What?” and the older man said, ‘No, go, go!’”

On a map of Mexico, the southernmost part of the country looks like a foot; Barillas, the Guatemalan village she reached at 6 p.m. that day, is just under the heel of that Mexican foot.

The following day, she read a book and scratched bites while waiting for the rain to stop, finally gave up on that and left. The road was paved, but she was cold and wet by the time she reached the Guatemala-Mexico border. On the way out, a confused border guard stamped her passport for entry to Guatemala, and so the Mexican guard across the way was also confused. But he let her in. She was a gringa, a white woman, not likely a threat to Mexican security.

She had wanted to change money, swap some greenbacks for pesos, but the border station there was so small the guards couldn’t tell coming from going, apparently, so no money-changers there.

“When I made it into Mexico, I started to drive, and I started going up in altitude. I wasn’t expecting that. I’m on nice paved road, but I’m cold, I’m wet, and now I can see my breath. It’s just drizzling and drizzling, and I’m wearing, like, dumb stuff. And at some point I see this little town, and I went in and I found a little hotel and I talked him down to a hundred pesos. And now I’m trying to change money, and I walk around and ask at every little store is somebody here who can change dollars. No, no, no. So they send me out to the highway, where a taxi driver changes 10 dollars for me. So now I have a hundred pesos again. Well, I eat, right? And I spend 50 pesos, and then the next morning, I have to eat again, so I spend 10 pesos on cookies, because I’m not going to spend all my money. And then I have to leave, but it’s pouring frickin’ rain.

“So I spent the night in some fleabag hotel and got bitten all over again, and I wait around till 9:30 in the morning, it’s pouring rain, and I’m, like, screw it, I’m going to leave. Well, there’s a garbage can—and in Central America, because the plumbing’s so bad, they throw the toilet paper into a garbage can; you never put your toilet paper down the toilet. So there was a waste bin with a big, black, garbage bag in it. And I thought, ‘Okay, we kinda need that garbage bag!’

“So I take the big garbage bag, I turn it inside-out, make a hole through it, put it over my head, knowing there’s all this—blech! It was so gross. Make my little arm holes, so now my arms are just gonna get wet. So I carry on, and it’s raining and it’s drizzling and it’s getting colder and colder, but eventually I start to go down in altitude.”

She looks at her notes again. “Soggy leathers, high altitude, foggy, cold, and then a military checkpoint.”

Once, some bikers in Mexico told her, if you get stopped by the men with uniforms and guns, whatever you do, do not get off your bike.
“I’ve run into those before, and I’ve never had a problem with them, but I was in a remote area, and the guy was not friendly, and he had seven subcommandants, you know, like, underlings. And he told me to get off the bike. And I kept refusing. ‘You can check my bags, you can check my bike, but I’m not getting off.’ And he said, ‘Well, we’re going to arrest you, we’re going to charge you with insubordination, and we’re going to take you to jail. I’m going to call right now.’

“So he disappears for 25 minutes. I’m in a drizzle, I’m sitting there, no one is being friendly to me. No one is smiling. They’re stopping cars, they’re checking bags of grain, it’s the most aggressive checkpoint I’ve ever been at. So I’m kicking myself, you stupid woman. I’m scared, and I feel like I made the wrong choice because I made him look bad in front of his underlings. And if I go to jail here it’ll be a horrible experience. After 25 minutes I ask them, ‘Do you know where the guy went?’ but they won’t even look at me. And then he shows up. And he says, ‘Do you have time?’ I said, ‘I’ve got no money, got no gas, I’m freezing cold, and I’m hungry, but I do have time.’ ‘Okay, come with me.’ So I get off the bike, I follow him into this little hut, and he says, ‘Would you like some coffee? Do you need dry clothes? We have ladies that can make some food for you.’ And I’m like, no, and I start apologizing, I’m so sorry, I was very wrong not to get off my motorcycle, and he’s like, I’m sorry too, and we’re shaking hands. We came out and I had a big smile on my face, and he got his mojo back in front of his workers. So I carried on.

Later, at the ruins of Bonampak in a southeastern corner of Mexico, she is refused entry. It’s the slow season, the gate attendants don’t feel like working, though if she has enough money, maybe something can be done. But she doesn’t; money is a recurring problem on this trip as pesos run out and American greenbacks are difficult to change. Later, a taxi driver will give her 500 pesos for $50 U.S., and she will eat all the tacos she wants, but nothing on this trip is easy, nothing is certain.

Now she wants to get back into Guatemala, but the border is a very big river, and the boat is very small. “We had to get the bike down all these steps, lift it onto the boat, it’s a little wooden canoe with a five horsepower motor.” The river was wide, but they made it safely across, let her and her motorcycle out on some rocks, and then motored away, five horsepower Evinrude chugging as she looked around and realized that she was not across the river. She was in the river. Halfway across.

But because she had been able to change that $50 U.S. and had a pocketful of pesos, she had given the boatman a nice tip, and when she started yelling, he came back. End of story.

Well, not quite. There was still narco country, where field workers ducked and hid as she approached, there was a second set of ruins that she tried to visit without success, there was a very strange military convoy with many armed men and some tanks standing in her way, there was the Transversal del Norte with occasionally horrifying road conditions (see Youtube: “The Transversal del Norte Guatemala on a CX500” for another rider’s experience), and then there was a long ride in mud approaching the beautiful town of Rio Dulce, just south of Belize on Lake Izabal, where the sun shone and there was a comfortable hotel, a warm bed, good food, and two days of pure goodness. After that, she rode home, on the straightest, least exciting highway she could find.