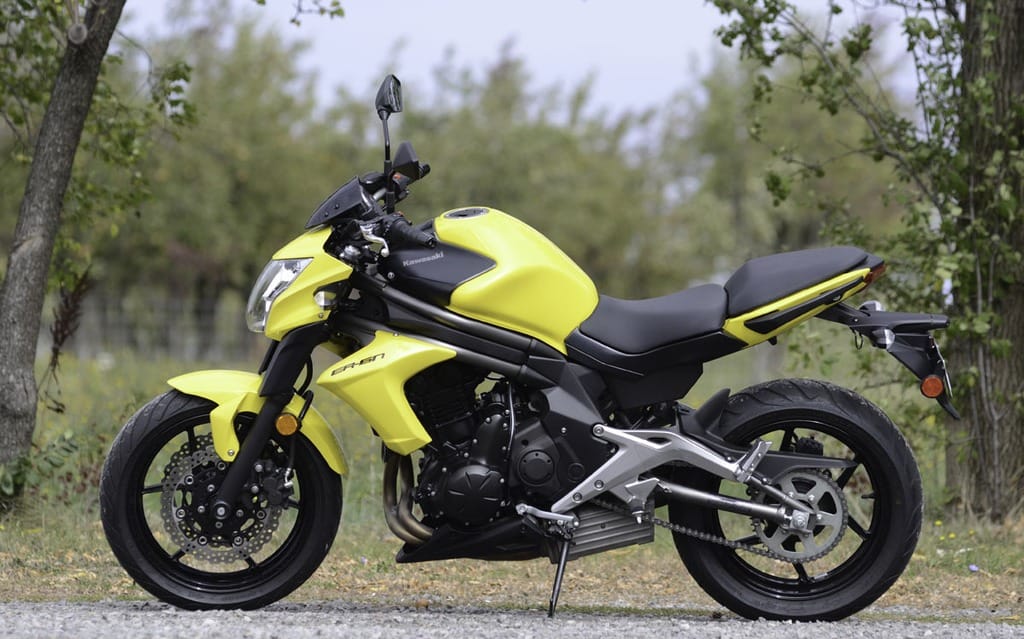 Over the next two weeks, the full drama appears in four parts. This is the first of three sidebars and the series wraps up with the full article. So dim the lights, sit back and enjoy as we present: The 2012 Cycle Canada Fall Tour.

Crappy weather is a given for Cycle Canada Fall Tours, so I raise an eyebrow when Editor Graham announces this year’s selection of bikes. The Honda at least offers a modest windscreen, as does the BMW while throwing in heated handgrips, but the Kawasaki ER-6N is a naked bike.

Guess which one I got.

Thornton picks the dates and manages to avoid rain, which is a blessing after the soaking we got last year, but the temperature is pretty much single digit all the way. I wear my woolies but leave the electric vest at home as there is no place to plug it in. I’ve managed to pare my essentials for the trip down to a tank bag’s worth, but the hump on the Kawasaki’s tank leaves no flat area to mount it securely. Fortunately the new two-part seat leaves a generous rear section and I have no difficulty strapping onto the hooks provided. I find the seat itself to be the most comfortable of the three bikes we’re riding: broad, well-padded and comfortable for the entire trip. Anyone taller than me might find the ergos a bit cramped, but I have no complaints.

Gusting out of the West at 70 km/h, the wind makes our departure along the QEW towards Hamilton a total chore made worse by the drag of bulky gear. Instead of enjoying a normally neutral riding position that’s easy on the wrists, I’m pulling myself into the wind and wishing for a sportbike. Good for the abs, I suppose. The handlebar on the 2012 ER-6n is supposedly 20 mm wider, which helps manoeuvrability but increases the sail factor by some immeasurable amount. The mirrors may also be wider apart but they’re still too close together to see anything but my arms.

I cross the Burlington Skyway behind Thornton on the NC700 with Bremner leading on the BMW F700GS, and we all dart and weave as strong sidewinds try to blast us out of our lanes. On the south side we turn to run eastward along Ridge Road at the top of the Niagara escarpment, and all of a sudden I can hear the bike I’m on. I like what I hear.

Six-fifty cc parallel twins are not known for their smoothness, but this engine could teach Edward Turner a thing or two. It not only offers smooth torque from a little over 2,000 rpm but also manages to scream its way to 11 grand with a soulful howl setting in at 8,000 rpm that makes the other two bikes seem weedy and anemic in comparison. Kawasaki has a way of making even a budget bike visceral, connecting with the rider and adding a level of excitement that the other bikes simply don’t have. It feels much faster than it is, which is generally a good thing, and offers power and torque output characteristics that are eager and entertaining but unlikely to get anyone into trouble.

You can watch all the action on the perfectly legible analogue rev counter positioned clearly at the top of the compact instrument pod which also features a large digital speed readout, fuel gauge, odometer with trip readings and a little eco symbol that goes out when you crank the throttle, encouraging the rider to conserve. Good luck with that. Our trip isn’t long enough to confirm fuel consumption or range readings but my expectation is that this is the bike we’d be stopping for.

Many of the roads on our route are in rough shape, and in comparison to the BMW GS in particular, the ER-6N’s suspension is clearly outclassed when the going gets rough. It’s stable enough and doesn’t get chucked around badly, but you can’t breeze through a pair of heavily patched corners without working to hold your line more than on the other two bikes. It provides neither the controlled compliance of the dual sport BMW nor the softly-damped plushness of the commuter-minded Honda, but that’s okay. This frisky little machine is not trying to be an off-road animal or a middle-of-the-road appliance. It’s a youthful combination that’s completely unpretentious but totally in your face.

Riders interested in either of the other two motorcycles on our test likely wouldn’t look twice at the ER-6n. Frankly, I think this exuberant little bike is a bigger threat to one of its own stablemates, the Ninja 400R. If I was riding a CBR250R or a Ninja 250/300 and thinking of trading up, I’d be tempted to skip the 400cc stepping stone altogether, find another $600 and head straight for an ER-6n. And if the added utility of the Versys was really attractive to me, I’d be looking carefully at the NC700.

Kawasaki’s ER-6n is the Ron James of motorcycles. Stubby, feisty and eager to please, this bike is unaffected and totally entertaining. Kawasaki has given us a 2012 model in Pearl Shining Yellow which is completely in keeping with the perky nature of this bike and unfortunately not available in 2013. Act now if you like it as much as I do.