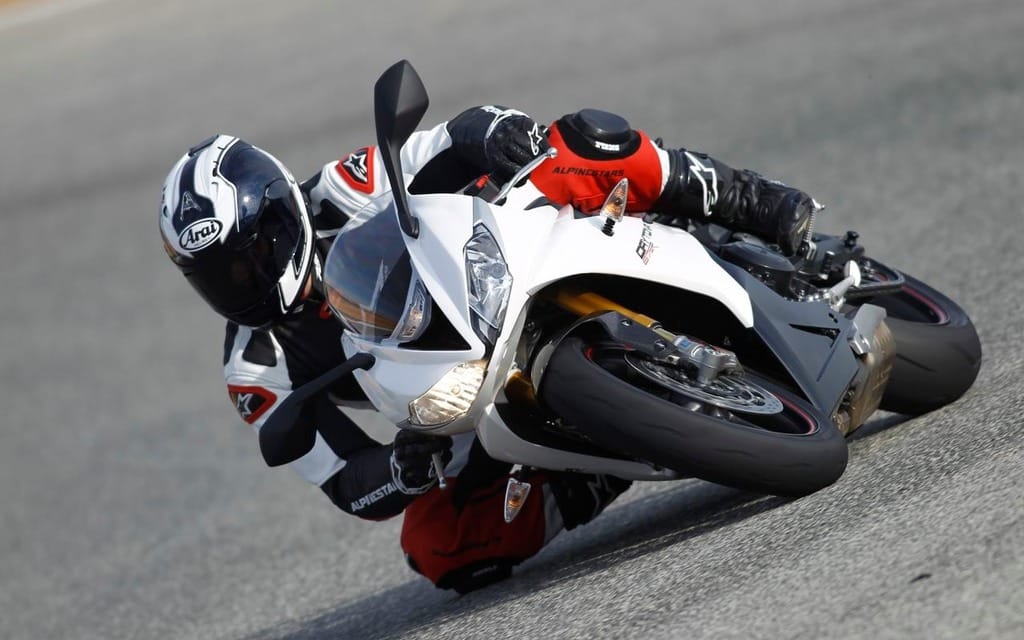 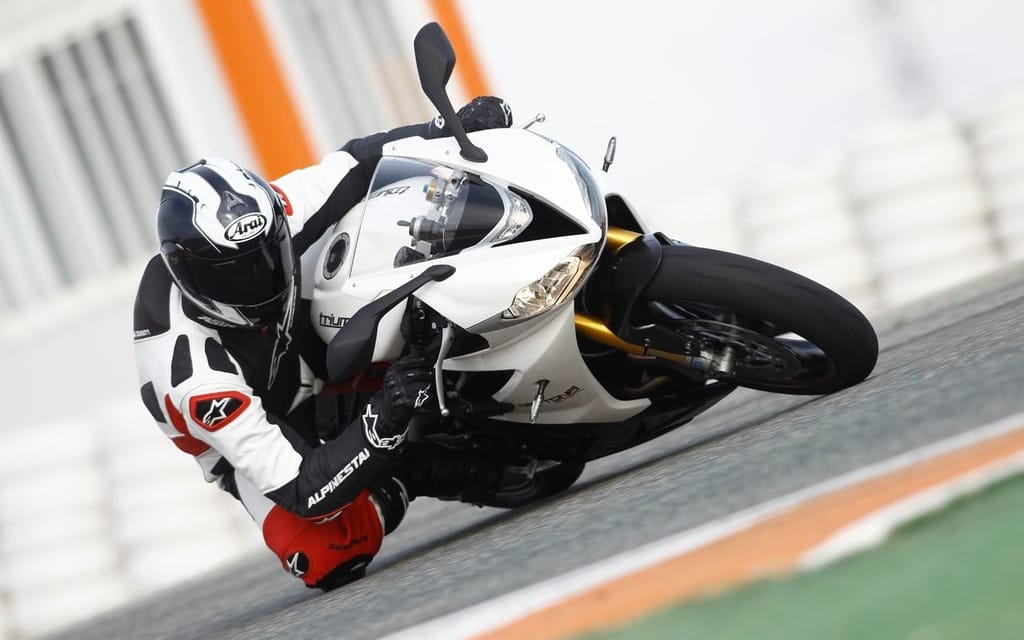 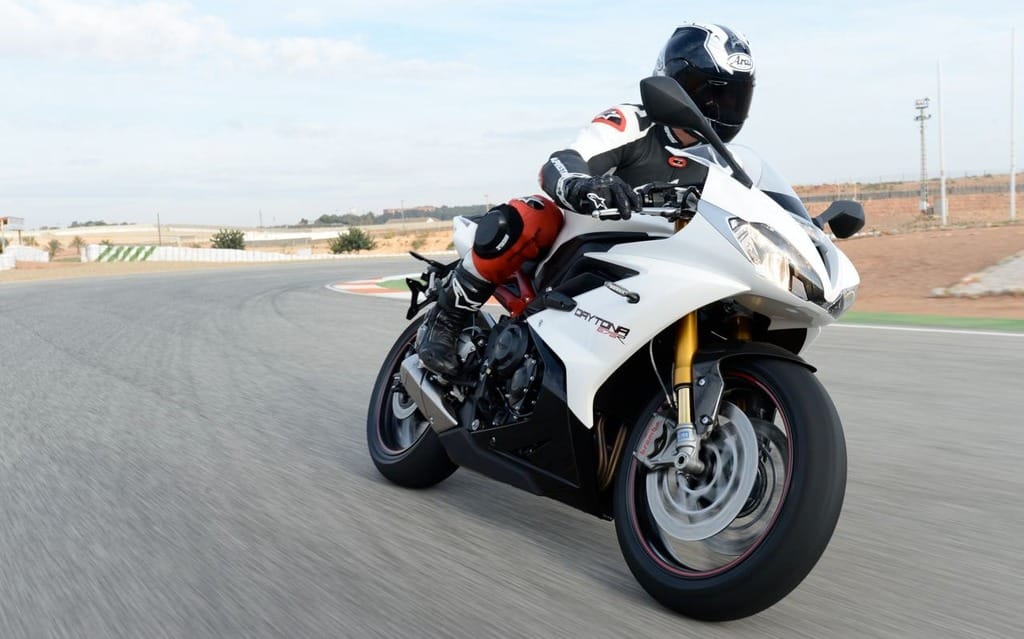 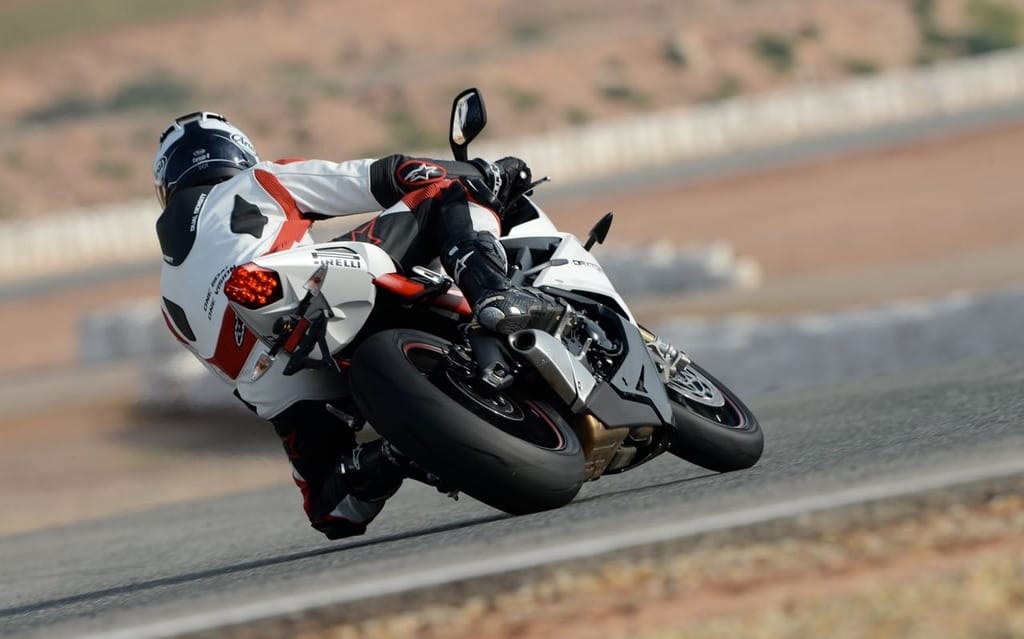 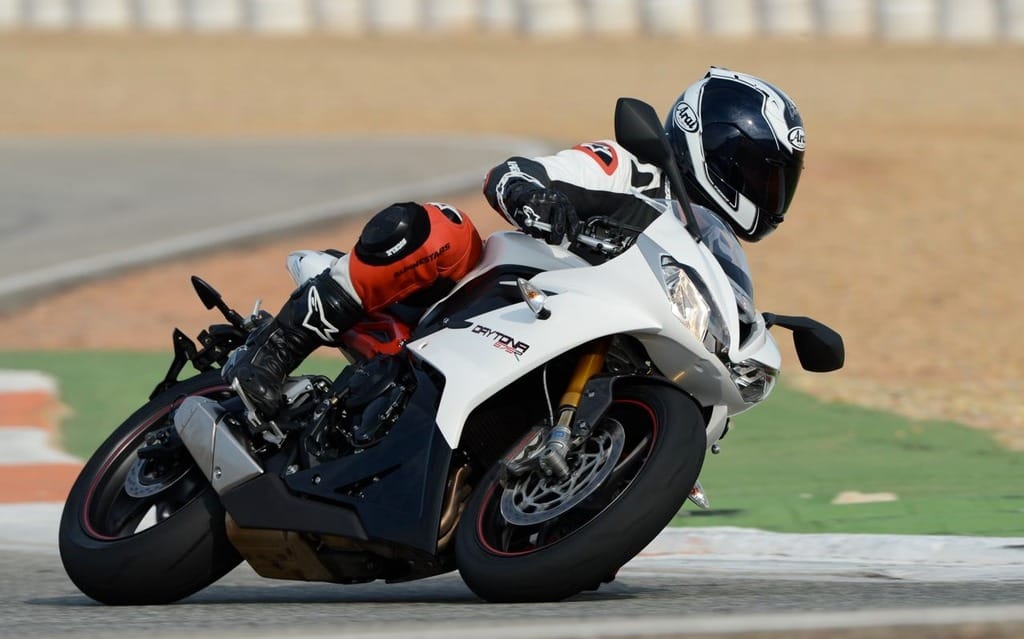 Hot Off The Track! We Ride The Triumph Daytona 675R!

The sweat drips down my nose on my laptop as I write this, as I’ve just come off the track from my second session on Triumph’s brand new Daytona 675R. When the pictures of the new bike were first released, some were disappointed with the conservatism of the restyle (the underseat pipes have been jettisoned for a single right-side can—but those old pipes were so mid-’90s anyway). But I can say with surety that the bike is dramatically—if subtly—different in a dynamic sense than the old Daytona 675. The engine, despite having the same displacement from its three cylinders as its predecessor, has a bore up two mm to 76 and a stroke down to 49.6 mm from 52.3.

Motivating the change in internal dimensions was a desire to increase revs while keeping piston speeds within reason. Fortunately, the additional 500 rpm added to its redline hasn’t come at the expense of the old engine’s well-deserved reputation for usable torque.

The Cartagena circuit we’re riding today is ideal for a middleweight. It has mostly second and third gear corners and a sizeable straight that allows the Daytona to flirt with the redline in fourth gear. The old Daytona, for all its charms, was a bike very much in the European sportbike tradition. The suspension was hard and the seat was high, which gave it a perched-on rather than a settled-into feeling. The new bike has a slightly revised riding position that better integrates the rider with the bike. It sounds subtle (and it is) but when you’re charging about and dragging your knees on the tarmac, an at-one feeling with the machinery is indispensable.

At today’s launch we’re only riding the $14,599 675R, which differentiates itself from the base $12,599 675 by the addition of Öhlins suspension front and rear, a quick-shifter, Brembo brakes (the 675 has Nissin calipers) and ABS. The R gains a carbon-fibre rear tire hugger and C/F inserts in the cockpit. I’ll have to reserve judgment on the base suspension until we have a tester next summer, but the Öhlins-equipped R is a gem. At a track like this most of the time is spent leaning over, with the only time to catch your breath coming on the 610-metre straight. Feel from the front end is exemplary, and it gives you plenty of warning that the front tire is reaching the point of no return. Fortunately that point is far over the horizon, as even with my knees, toes, and footpegs dragging the ground the bike is rock solid.

Of course the heart of any motorcycle is the engine, and the Triumph separates itself from its middleweight Japanese competition with its three-banger. It’s hard to imagine a more likable and tractable engine. It snarls, growls, and, by the end of the front straight, howls like a werewolf. Putting the power to the ground is a clutch with a slipper function, and the excellent brakes are augmented by ABS that has a “circuit” setting specifically for track use. (The ABS also has a standard setting for the street and it can be shut off.) What the Daytona doesn’t have is traction control. In Triumph’s lineup only the Trophy and the Explorer are so equipped, and both of those, not coincidentally, are the only ones with ride-by-wire throttle—look for it the next time Triumph revises the Daytona. Read more in the March issue of Cycle Canada, but for now, I’m back on track.